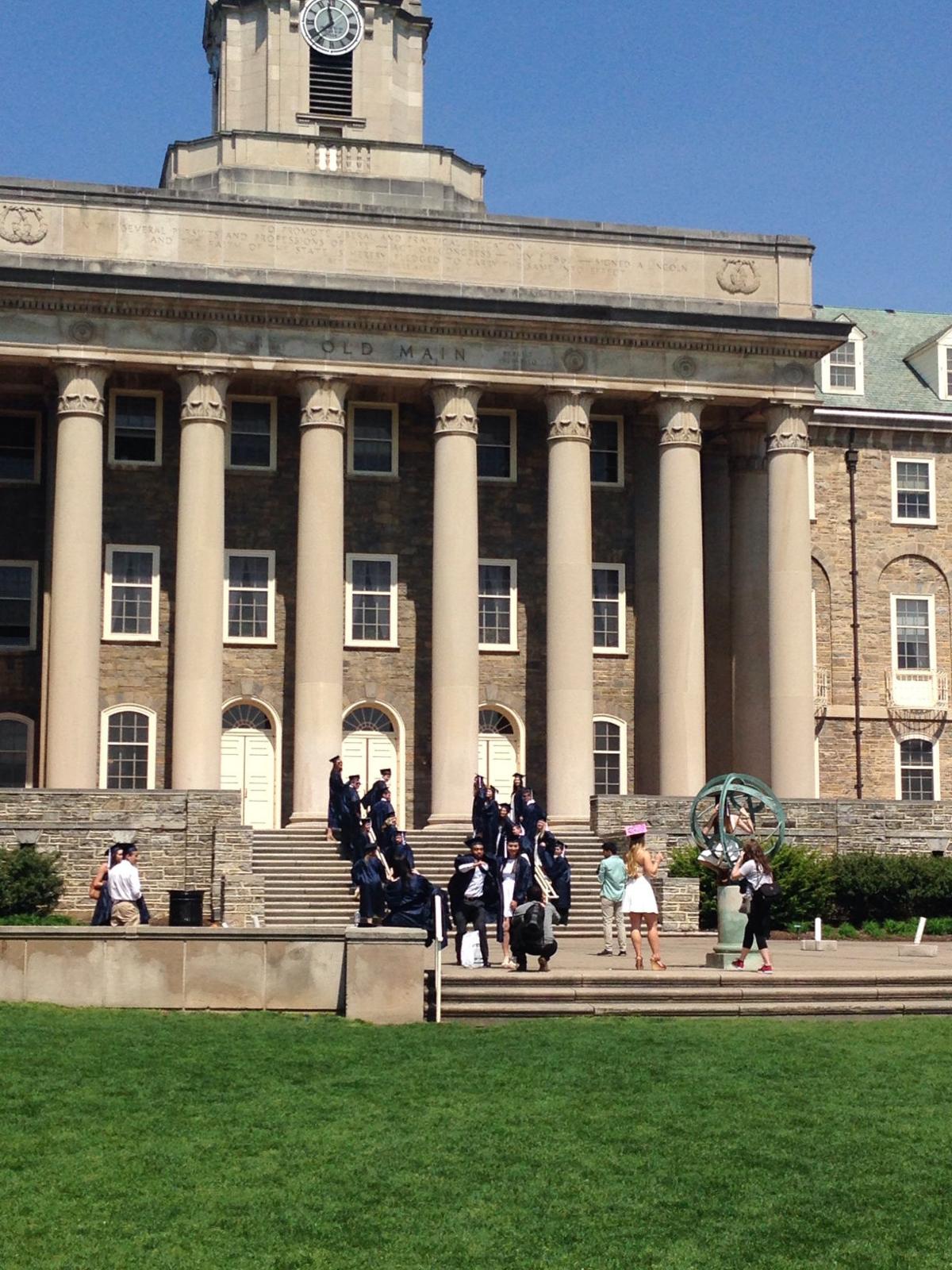 Penn State graduates gather in front of Old Main for photos ahead of this weekend's graduation ceremonies. 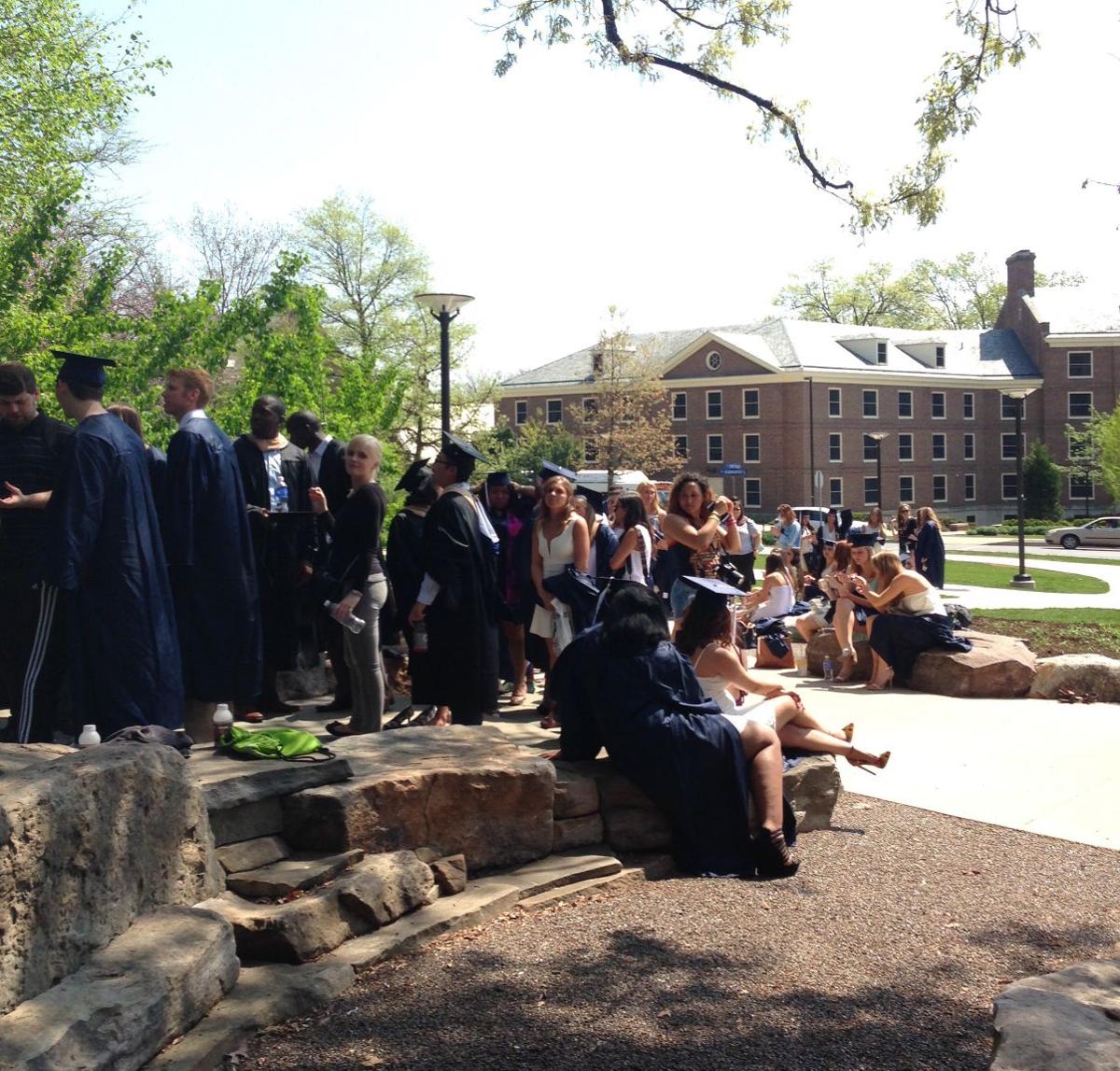 The line of graduates waiting to get their picture taken at the Nittany Lion shrine stretches hundreds of feet at the Penn State University main campus ahead of graduation this week. 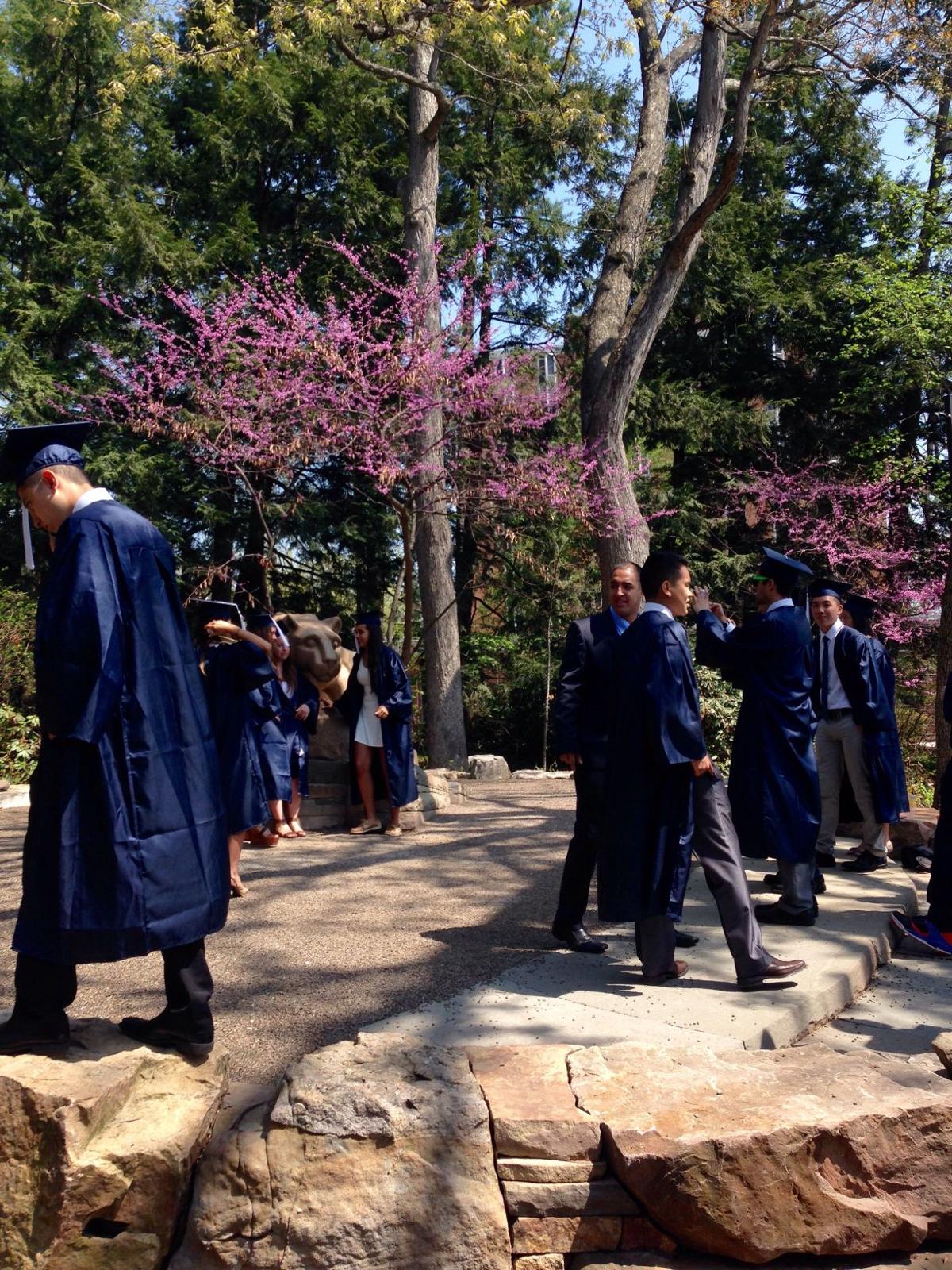 Penn State graduates gather around the Nittany Lion shrine for photographs prior to graduation this weekend in State College.

Penn State graduates gather in front of Old Main for photos ahead of this weekend's graduation ceremonies.

The line of graduates waiting to get their picture taken at the Nittany Lion shrine stretches hundreds of feet at the Penn State University main campus ahead of graduation this week.

Penn State graduates gather around the Nittany Lion shrine for photographs prior to graduation this weekend in State College.

STATE COLLEGE -- More than 9,000 students will don their blue caps and gowns for graduation at Pennsylvania State University this weekend. Many will march into the Bryce Jordan Center or the Eisenhower Auditorium knowing that the bill for their education remains unpaid.

The aid office tells students to shoot for starting salaries of $58,000 a year to afford their payments.

The newly minted alumni of the state's flagship university aren't alone in the red.

As of two years ago, the average student loan debt attached to an  undergraduate degree in the United States was $28,000, according to the Institute for College Access.

But Pennsylvania students seem to accrue more debt than most.

The average debt carried by a graduate of a Pennsylvania public university in 2012-13 was $32,528. Only students in Delaware and New Hampshire fared worse, according the the institute.

For Penn State grads, the average was $35,430 - almost double the amount of debt carried by students in New Mexico, the state with the lowest amount of student loan debt.

With the warm May sun shining and cherry blossoms in bloom, the specter of debt was obscured by a celebratory mood in State College on Thursday. Students in their graduation attire proudly strolled the campus, taking photos in front of landmarks and accepting the congratulations of friends and passersby.

At the iconic Nittany Lion Shrine, students preened and baked in the sun as they waited their turn for pictures. A group of nursing students at the end of the line said they expected an hour's wait.

Elsewhere on campus, Tyler Flores was preparing to graduate with a degree in political science and media studies.

He aspires to work on campaigns. For now, he is heading to Walt Disney World to work in guest relations. The job will give him a paycheck and build his people skills, he said, as he tries to find work in politics.

Flores is leaving school with about the average debt for a Penn State student, he said. “I think I will be able to handle it,” he said.

That bit of good fortune gives Krum a leg up on many classmates. With a degree in the high-demand field of energy engineering, he knows that his job prospects are pretty good, he said while standing in cap and gown, and waiting to take a photo with fellow engineering students.

Casey Lellock, of Punxsutawney, doesn’t have a job lined up, either. But he has about $35,000 in student loans to consider while weighing what to do next.

“I’ve had a couple of offers. It’s coming down to where I want to live,” he said.

He could move to Houston, but he’s interested in landing a job that is within driving distance of home, he said.

Like many of his classmates, Rob Paganelli, of Blandon, will leave school having amassed more than $30,000 in debt.

But he's parlayed a co-op placement at First Energy in Pittsburgh into a full-time job. The energy engineering major starts work in mid-June with a salary of $60,000.

That puts Paganelli in comparably good shape. The aid office suggests that a student with $35,000 in debt will need to make payments of $388 a month for a decade. The “recommended income” for those payments is about $58,000 a year.

Kunes said the university makes available plenty of information and guidance. Using an online portal, students can check how much money they've borrowed.

Miles away, in Harrisburg, rising student debts at Penn State and other universities haven't gone unnoticed.

Lawmakers said a lack of state support, stemming from a decade's worth of budget woes, aggravates the situation.

In addition the state-related universities - including Penn State, the University of Pittsburgh and Temple University - have increased tuition because they can get away with it, said Sen. John Wozniak, D-Cambria County.

Pitt and Penn State are two of the three most expensive public universities in the nation, according to U.S. News and World Report. When all costs are included, a year at Penn State runs about $34,598. But plenty of families are still willing to shell out the money, and students are willing to take on the debt, to attend the state’s biggest universities.

School pride fuels some of that, and some of it reflects faith in the potential dividends of joining a vast alumni network, said Wozniak. He went to Pitt. His children went to Penn State.

He's calling for $81 million more for the somewhat autonomous state-related universities, such as Penn State and Pitt. He wants a $45 million increase for the 14 universities in the separate Pennsylvania System of Higher Education.

In exchange for the funding boost, Wolf is asking the universities to freeze tuition next year.

Lawmakers say other proposals could alleviate debt loads, as well.

Both will help save money for families by reducing the amount of time that a student must attend college before donning a cap and gown, taking a picture next to the Nittany Lion statue and picking up their degree - and the bill.

John Finnerty covers the Statehouse for CNHI's Pennsylvania newspapers. Reach him at jfinnerty@cnhi.com.

TAHLEQUAH [mdash] Dr. Donn R. Turner, beloved physician, husband, father, and grandfather, died Saturday, January 23rd, due to complications from surgery at 73 years old. He was preceded in death by his father, Donn William, and his mother, Oddie. He is survived by his wife, Sue Turner, his …