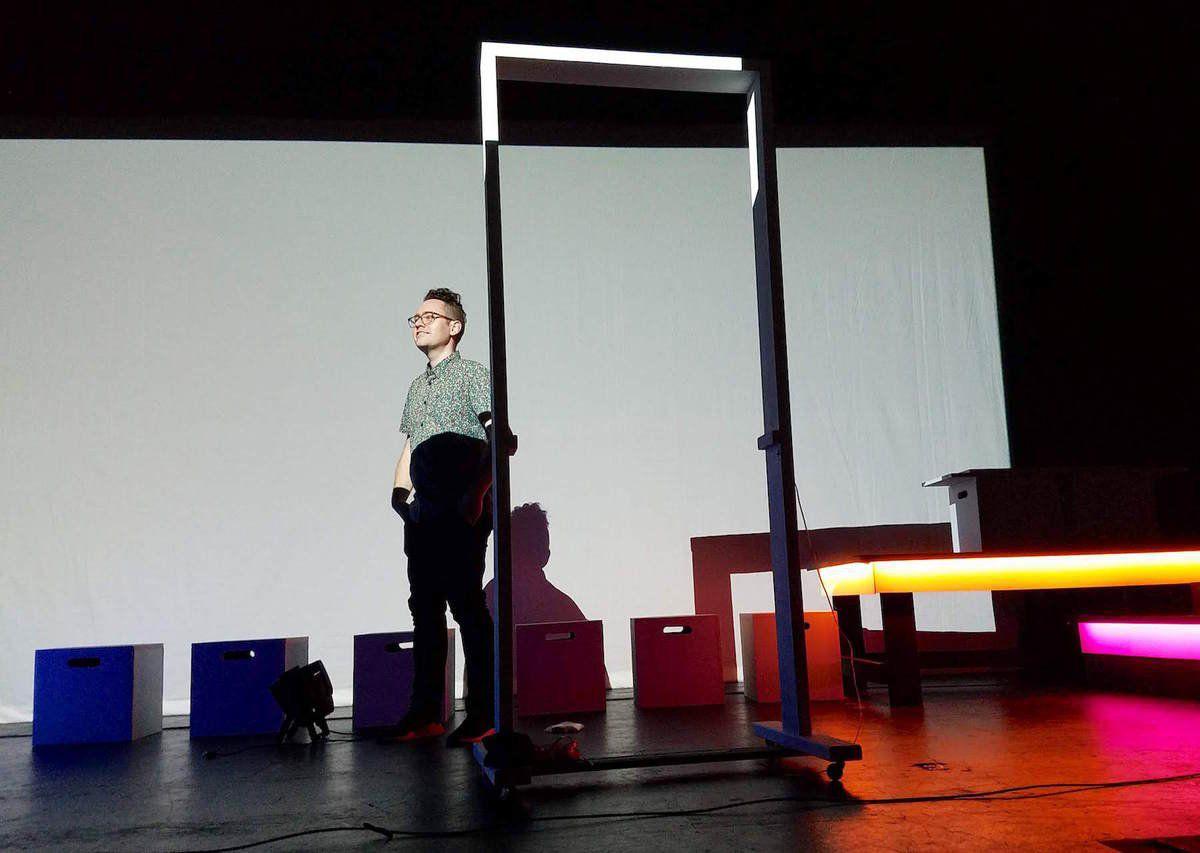 Matthew Kaney checks stage lighting in preparation for Tahlequah Community Playhouse's production of "The Curious Incident of the Dog in the Night-Time." 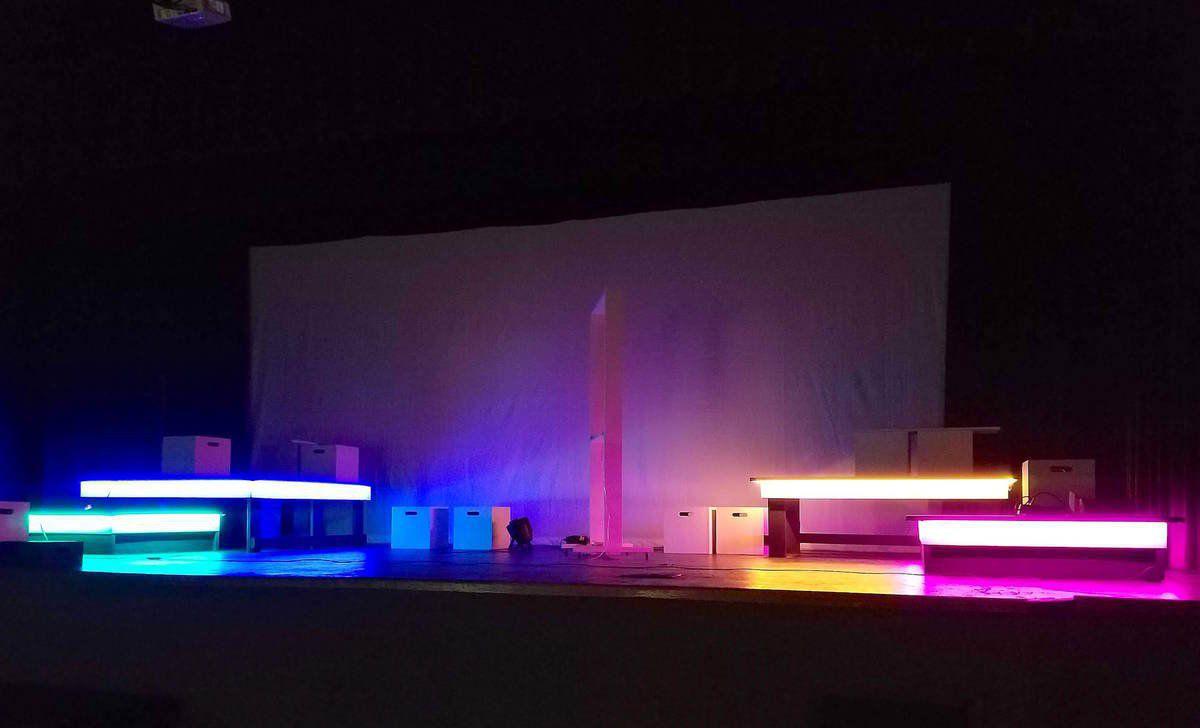 Tahlequah Community Playhouse's production of "The Curious Incident of the Dog in the Night-Time" will feature a lot of audio and visual elements, including special lighting and projected images. 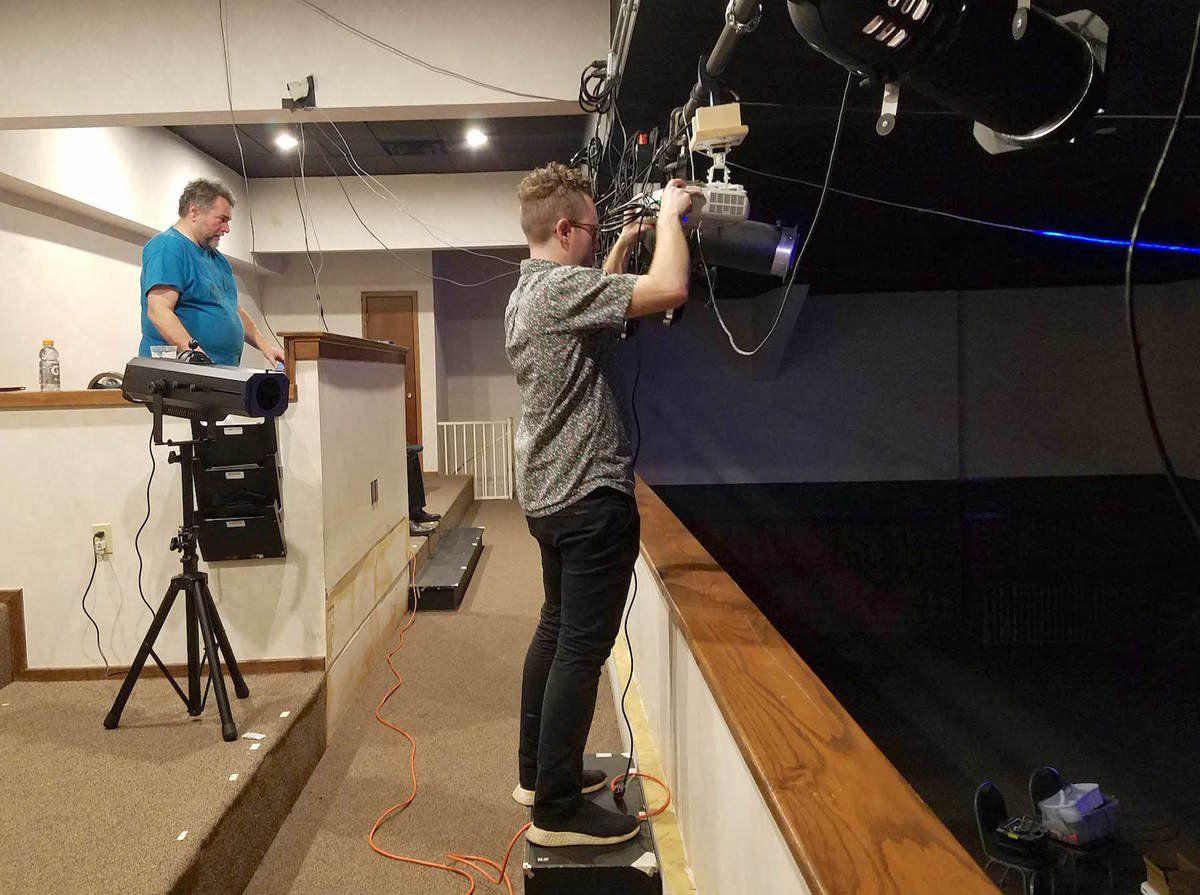 Brian, left, and Matthew Kaney work on lighting for Tahlequah Community Playhouse's production of "The Curious Incident of the Dog in the Night-Time."

Matthew Kaney checks stage lighting in preparation for Tahlequah Community Playhouse's production of "The Curious Incident of the Dog in the Night-Time."

Tahlequah Community Playhouse's production of "The Curious Incident of the Dog in the Night-Time" will feature a lot of audio and visual elements, including special lighting and projected images.

Brian, left, and Matthew Kaney work on lighting for Tahlequah Community Playhouse's production of "The Curious Incident of the Dog in the Night-Time."

Tahlequah Community Playhouse is currently in its 46th season, and members are thinking outside the box for the production of "The Curious Incident of the Dog in the Night-Time."

Based on the 2003 novel by Mark Haddon, as adapted by Simon Stephens, the play is directed by Peggy Kaney, and premiers Friday. Kaney has enlisted her family and friends to assist with her vision of how "The Curious Incident" should be presented. Her son, Matthew, returned to Tahlequah from New York to help with audio and visual technology, and her husband, Brian, has built the stage pieces and is learning how to use the tech.

Many others have volunteered countless hours to help produce this play, which has two acts and 51 scenes.

"I was really familiar with the novel and learned it was adapted for the stage," said Peggy. "TCP talked about doing this for years, but it wasn't available for community theater. I was excited when the licensing became available."

Peggy has bachelor's and master's degrees in theater, and she has contributed to TCP on and off for over 30 years. Brian has helped design multiple shows, and Matthew has a background in technology and theater.

Peggy said she likes to use her ideas for a script, so she doesn't normally watch other productions of plays she is about to direct.

"I have seen four different versions of this. I was interested to see how different people interpret the script," she said. "I saw the show on Broadway. I wanted to pull in some of the ways they presented it on Broadway, with the lights, recorded sounds, and projections."

The audio and visuals are important to this production because much of the story concerns the internal struggles of the main character.

"It's about what's going on in the protagonist's - in Christopher's - mind. He's a 15-year-old young man who would probably describe as having Asperger's or autism," said Peggy.

Peggy said they are giving the audience a taste of discomfort like when Christopher is overwhelmed with visuals, sounds, emotions, and he tends to pull inward.

"All of this information is coming at Christopher, and you see him get more and more frustrated as he deals with it," said Peggy. "I want it to be a little uncomfortable for the audience at those times - to get the feeling of what Christopher experiences."

Matthew has recorded sounds and visuals to represent thoughts, memories, information, and what Christopher is thinking and experiencing.

"The lights and sounds have that feeling of overwhelmingness," said Matthew, who moved to New York for graduate school to study art and technology.

Most recently, he has been building tools around music education, using coding, software development and design. He has also been performing music with a friend around New York for about a year. Matthew has written original compositions, with some being a bit of music and some sounds, and he was able to record sounds of the New York subway, which will be used in the TCP production.

"This is a fun canvas. It's a place to try out some things I've been working on," said Matthew. "That's the nice thing about community theater. While you have limited resources, it's open-ended. It's what the people you enlist want to attempt."

The stage presentation is not as normal as most TCP productions. Four platforms have been rigged with LED lights, which can all be controlled in the lighting booth to change the colors or turn one or more off. A door frame will be lit with LED lights. The platforms and doorway suggest numerous places in the play.

"We use them to isolate spaces of a scene or two different scenes in different spaces," said Matthew. "We're pulling in what Christopher remembers, what's happening now, and his thoughts on things."

The door frame and boxes move around for the scenes, and become different things, such as a front door, a bank ATM, a store, or a ticket counter.

"It's a matter of figuring out how to make the most of materials," said Matthew. "LED lights are not expensive parts or difficult to work with. It's setting it up so it's most effective. The biggest issue is time. You have to sort what's important."

A grant from the Tahlequah Community Fund helped buy some of the technical hardware for this production. Two projectors are being used, which means the machines had to be installed in the Armory auditorium, along with a surface to show the projections. Peggy special-ordered white material, and created a 12-foot by 30-foot projector surface that has no seams.

"There's so much that the audience doesn't see that goes in to making it all happen," said Buzzy Manning, who is part of the tech crew. "For TCP, this is very high-tech. This is totally different that anything TCP has ever done."

Graphics and animations are being developed to be projected, as there are no physical, painted backdrops for scenes.

"We'll have to be able to start and stop them live. We want the lights and sounds to be controllable and go along with the rhythm and pace the actors are performing at," said Matthew. "The book relies so heavily on diagrams and visuals. It's a rich, visual language."

Due to the platforms, and the nature of the production, the stage curtain will not used, and almost the entire cast stays on stage during the whole show.

Four of the characters stay the same, while six others will change roles throughout the play.

Like the set, the costumes will be fairly minimalist. Sandra Becker is handling the costumes for this production.

Tahlequah Community Playhouse Inc. presents "The Curious Incident of the Dog in the Night-Time," Nov. 8-10 and Nov. 15-17 in the Tahlequah Armory Municipal Center, 100 N. Water Ave. Tickets are available at A Bloom or Morris-Cragar florists, and online at www.tcpok.com. Show-only tickets may be purchased at the door. Call the box office at 918-822-4440 for more information.