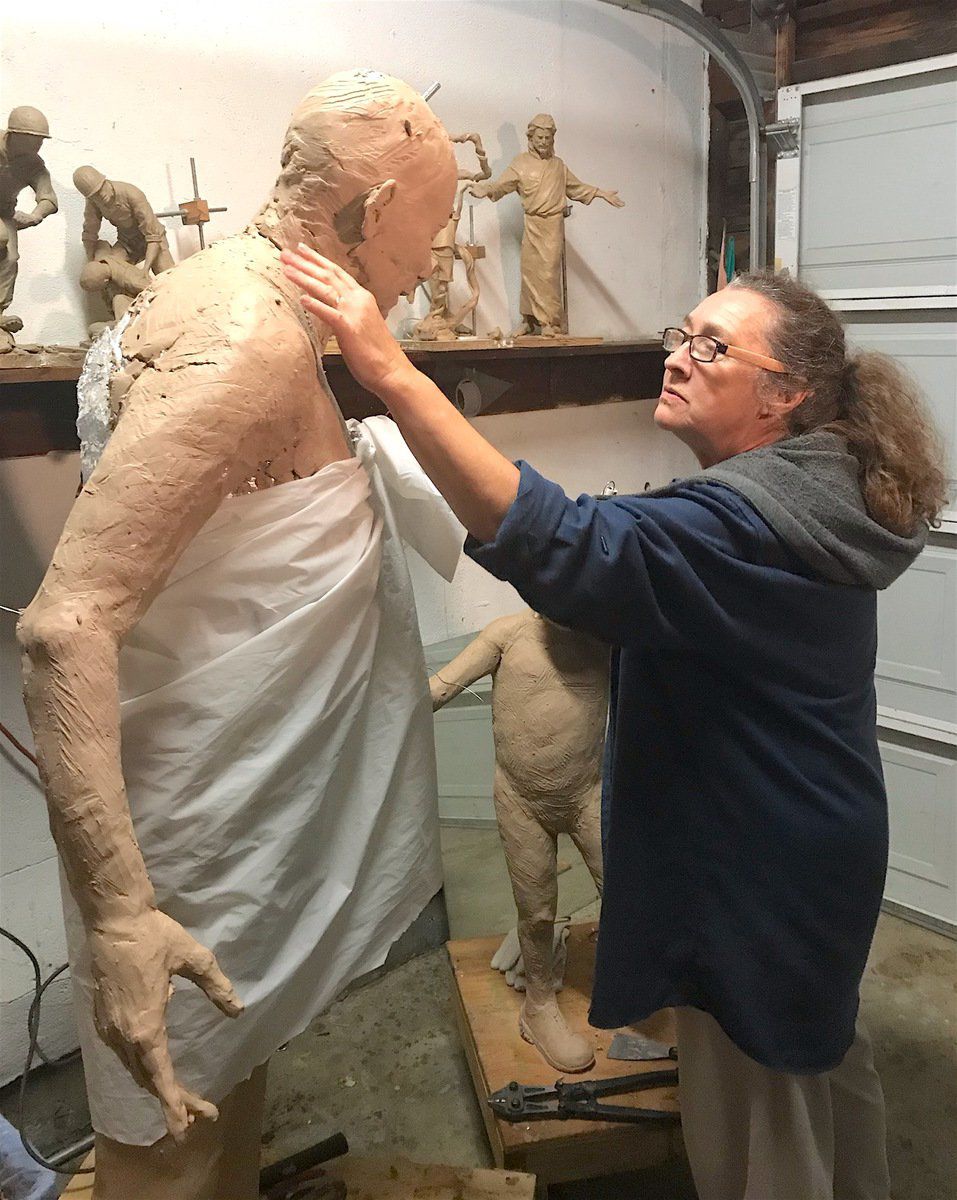 In her Tulsa studio, Denise Ford works on a sculpture of Beth Herrington. 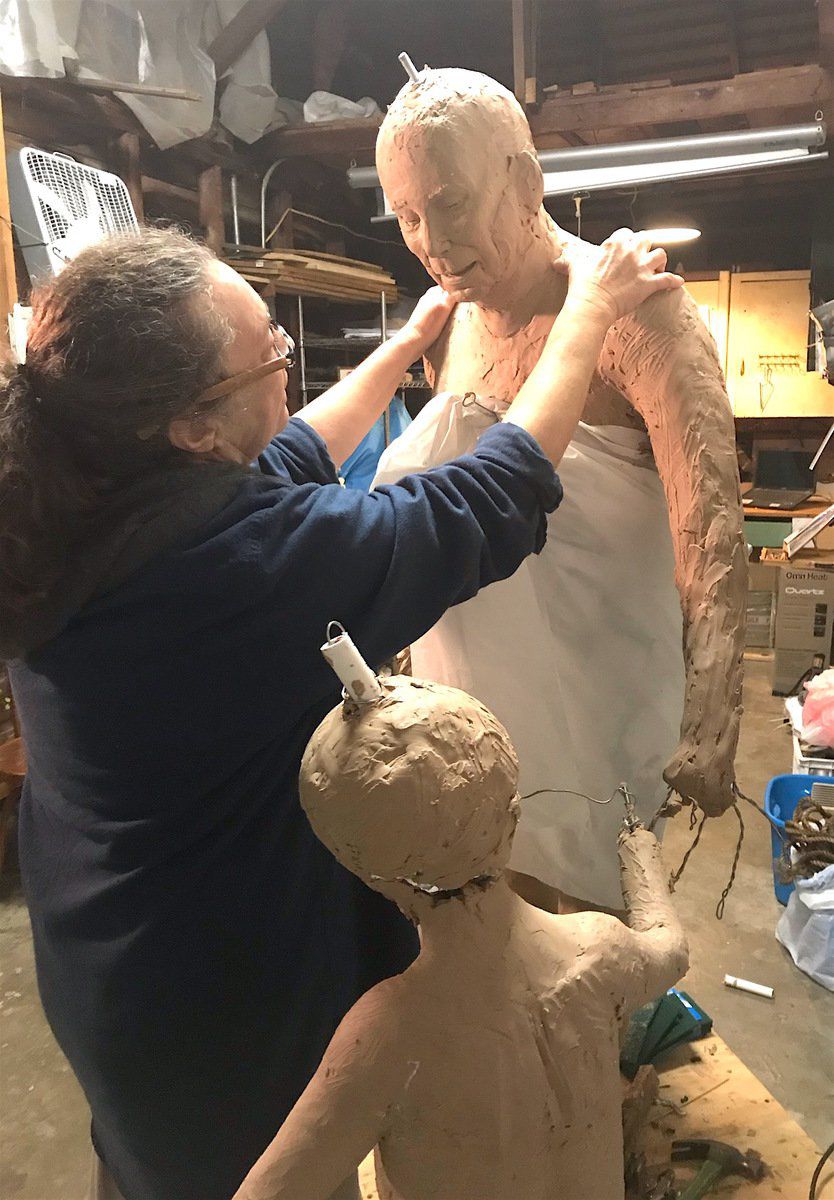 Sculptor Denise Ford works on the statue of Beth Herrington and a child that will grace the Thompson House lawn next summer or fall. 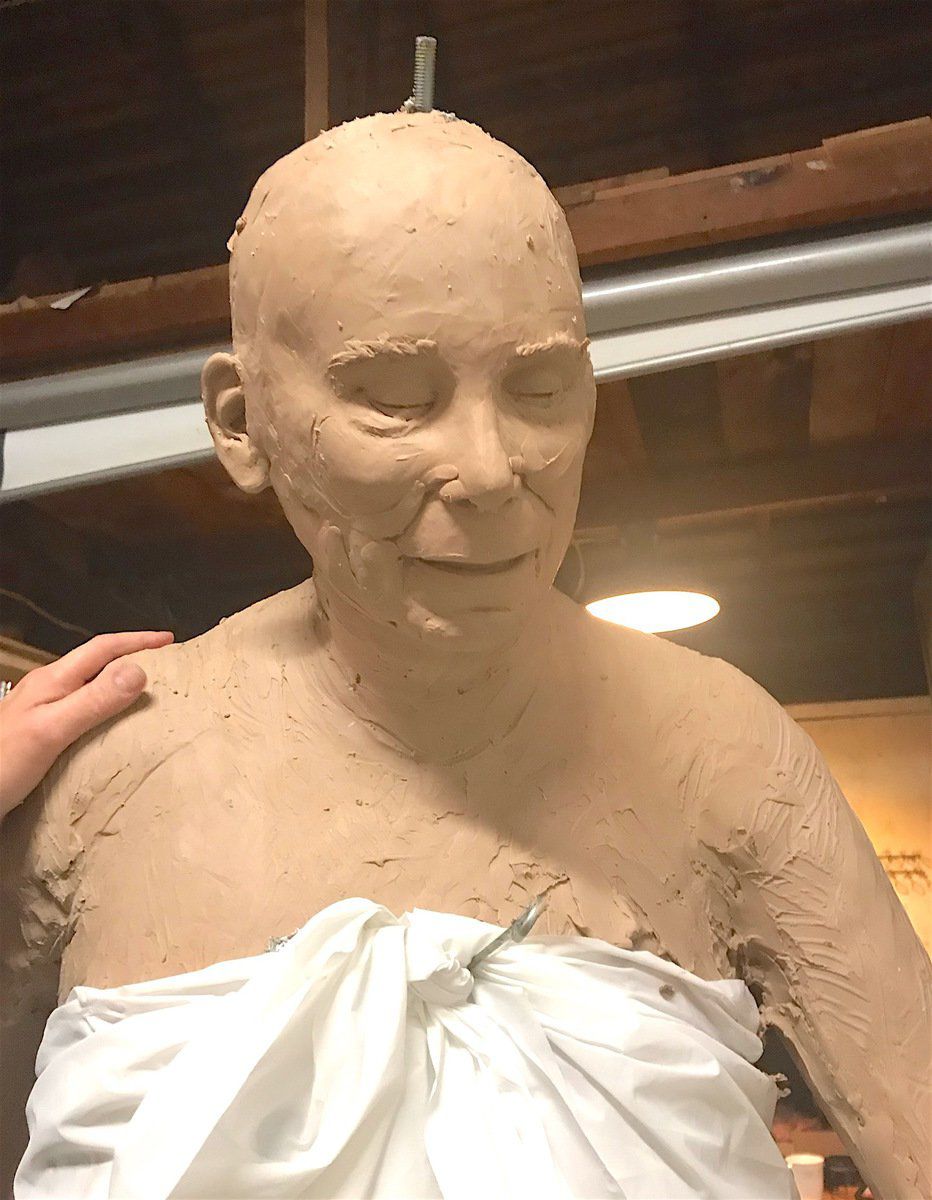 The face of Beth Herrington is recognizable in the early stages of Denise Ford's sculpture.

In her Tulsa studio, Denise Ford works on a sculpture of Beth Herrington.

Sculptor Denise Ford works on the statue of Beth Herrington and a child that will grace the Thompson House lawn next summer or fall.

The face of Beth Herrington is recognizable in the early stages of Denise Ford's sculpture.

Denise Ford looks at the world through an artist's lens, and with sparks of imagination, she often sees what others cannot.

The sculptor is soft spoken, welcoming, and enthusiastic as she shows the progress of her latest works in her Tulsa studio. She will be creating a bronze statue of Tahlequah historian Beth Herrington.

Ford works from photos, and she offers one explanation to how her creativity works.

This "fracture of self" is the state Ford seeks while working on a piece.

"My pre-perceptions and heart are unlocked then, and that's when I find the keys to all the different aspects of the sculpture on which I am working," said Ford.

It only takes a quick perusal of the work on her website to recognize she is a master. The detail is exact, the composition realistic, and how she can turn clay into a replica of a person is an impressive task. Like most people pursuing art as a hobby or career have discovered, practice makes perfect and Ford has found within herself that place of creative perfection.

"I've always had this 'gift,' I just didn't know it was called 'sculpting,'" she said.

As a 3-year-old, Ford was constantly crushing Kleenex tissues in her hand.

"Only later in life did that action make any sense as I held my first bit of clay. Genetically, I was hot-wired from the beginning to do this," she said.

After a series of jobs over the years, Ford is grateful her path crossed that of a nationally recognized sculptor who became her mentor.

"Rosalind Cook was loving and kind," Ford said. "She shared all of her knowledge without reservation for over 10 years. She was the one to take my fledgling attempts at sculpture and homed me in on the direction I find myself today."

She considers her mentor her favorite sculptor.

"I can't say if there are any specific sculptors I admire, save my mentor. But there are all kinds of sculptors who use all types of mediums today," said Ford.

Tools and technology are changing how some sculptors work.

"I am excited by the potential sculptors out there who now have a wonderful tool in 3-D printing," she said. "We are privileged to a whole new era of sculptures that are aided by computers. Once, people who have these visions in their heads, but couldn't put it to clay, will now have a voice using this tool."

At her studio, the figures of Herrington and a child are in the beginning stages, yet the face of Herrington is already recognizable.

When contacted by a Tahlequah committee, the photos of Herrington seemed like someone Ford would like to know, and she was pleased to be chosen to recreate a bronze likeness.

"I was so grateful to receive the call that our Beth Herrington was to grace my studio," Ford said. "I saw photos of her walking with a young child and instantly the flood gates of my perception opened."

Candid photos do give Ford a truer sense of the person and their nature, she said.

"In this particular photograph, I saw her whole body was 'actively listening' to the young boy as they walked together, her head bent down, closer to the boy, as she she was matching him step by step. This was the aspect that bridged the 'gap' in their differences," said Ford.

The hours of work Ford spends with a piece is not measured in minutes, but joy.

"The time I spend on a piece is measured by months," said Ford. "And yes, when the muses hit, that is when the work is 'hot.' I rarely dictate those flash moments, but I can trigger them into happening by a number of methods."

Ford will talk with Herrington before completing her sculpture.

"Before I meet Beth, I need to complete what I'm doing. It is important for me to see her reaction to the work. I am needing that initial 'gut' critique in her response, and I only get one shot at that," Ford said. "Thank you for trusting me to see 'Our Beth.'"

Most of Ford's works are in and around Tulsa. A few are in Atlanta, Chicago, Oklahoma City, and Muskogee.

"It is hard to pick a favorite sculpture," she said. "Check out my website at www.madeinbronze.com. It is so much easier than driving a car to see them."