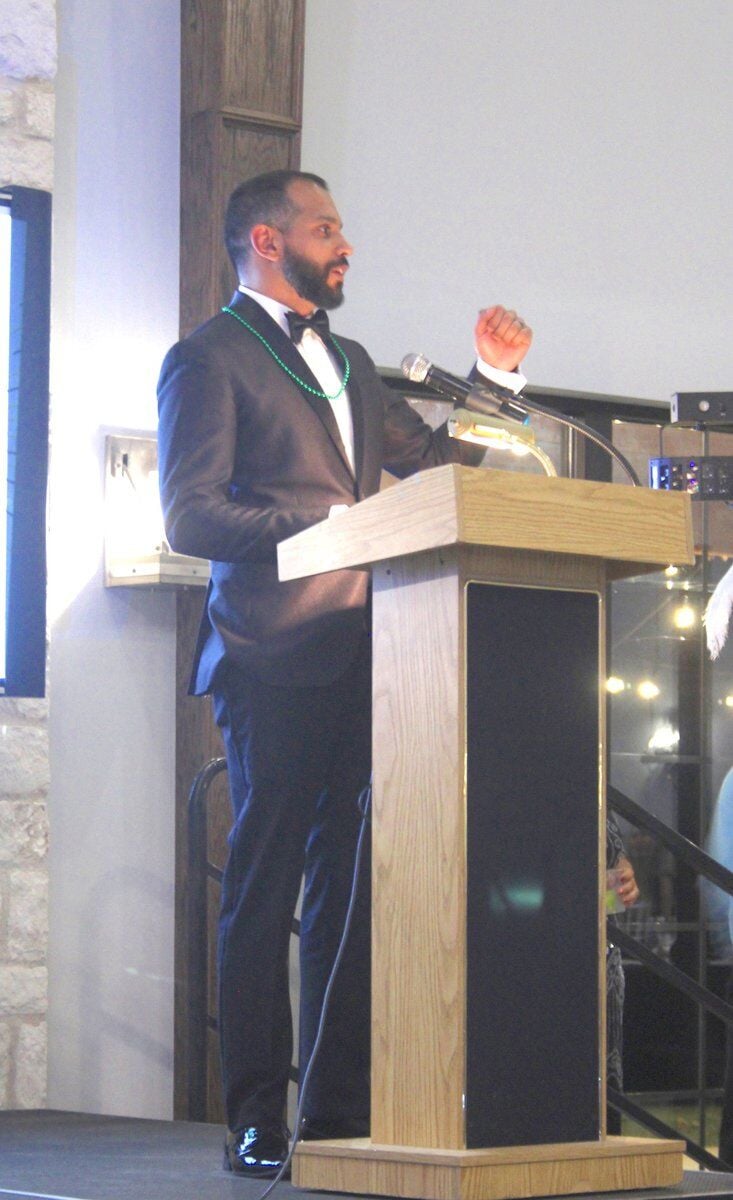 Bilal Chaudhry accepted the award for Mid-Sized Business of the Year on behalf of X-Press Stop of Tahlequah. 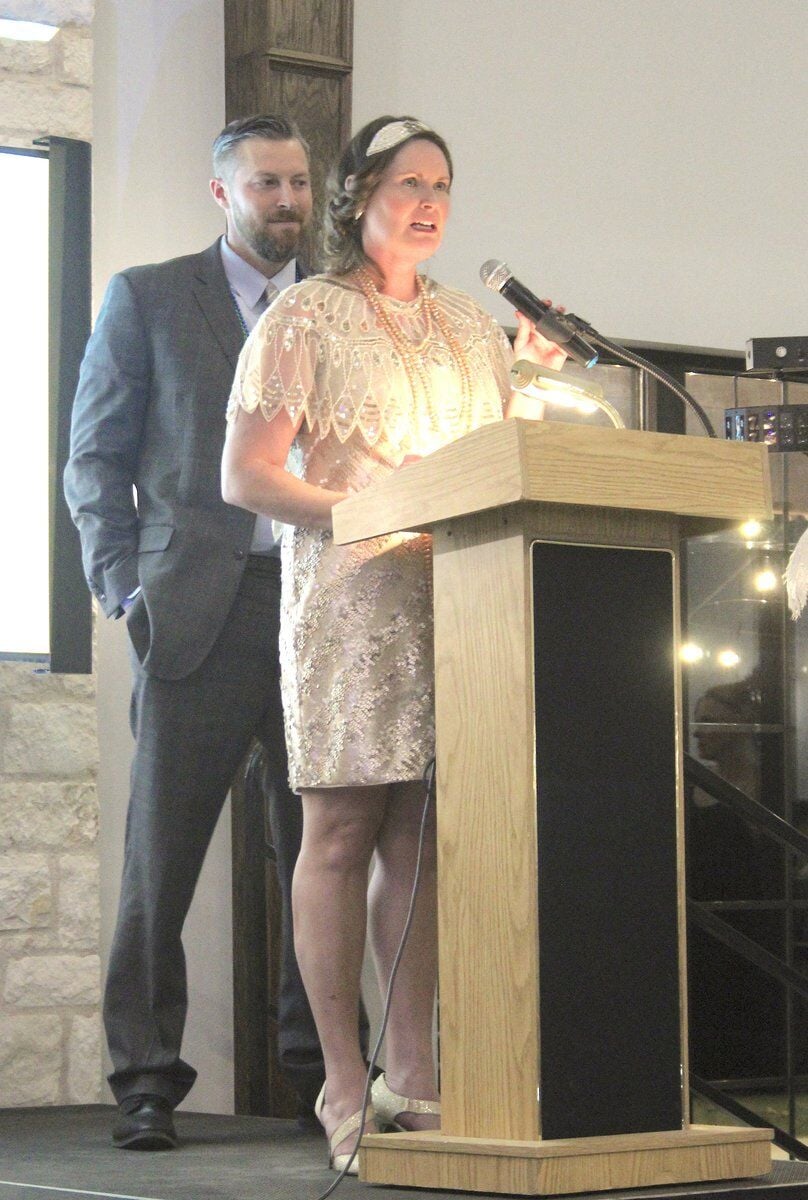 Bilal Chaudhry accepted the award for Mid-Sized Business of the Year on behalf of X-Press Stop of Tahlequah.

The Chamber Speakeasy Celebration was held at the Legacy at MK Ranch and attendees were encouraged to dress up for the 20s-themed night.

TACC Chair Jim Berry opened the night with a welcome to all who arrived. TACC CEO-President Nathan Reed gave recognition to all sponsors before dinner was served by Table 5 Restaurant & Catering.

The Hotsy-Totsy Business Awards commenced after dinner with Jami Murphy as emcee.

ALL Designs won the 2020-2021 Small Business of the Year award, and Amanda Lamberson accepted the award. Lamberson said she’s been in business for four years and thanked those for the award.

Bilal Chaudhry accepted the award for Mid-Sized Business of the Year on behalf of X-Press Stop of Tahlequah. Chaudhry thanked Lamberson, who is their graphic designer, and those in the audience including Dower and Sara Combs.

“I want everyone to know that I may be the one doing all the talking and marketing for X-Press Stop, but I think everybody knows that the true spirt of X-Press Stop is someone that I call ‘Boujee.’ That’s my father and some one you know as Moses. He’s the one who propelled me to come up here and he’s the one this is award for,” said Chaudhry.

Northeastern Health System CEO Brian Woodliff accepted the award on behalf of the hospital for winning Large Business of the Year award.

“No one could prepare with what we were faced with [during the pandemic], and it was an extremely hard situation,” said Woodliff. “One of the first patients that passed [away], I wanted to honor him by telling you a little bit about his story.”

The man visited those in the nursing homes and hospitals while the virus was spreading quickly.

“We were very apologetic when we learned that this COVID and his demise, and we’re apologizing and trying to care for him, and he inspired us in a great way,” said Woodliff.

The man stated he was serving the greatest way he knew how to, and Woodliff said those words changed the way frontline workers for NHS thought about the work they were doing.

Police Chief Nate King was awarded Hero of the Year for his efforts on tackling homelessness and those in need during the historic winter storm in February. King announced he’d open the city jail as a temporary shelter for anyone to come and go as temperatures dropped.

TPD provided shelter, food and basic essentials for people in need. King asked for volunteers to help monitor the shelter. Right before the storm hit, King announced that the community brought in enough coats, blankets, stocking caps, and gloves to give to officers to distribute during patrols.

“The people that are here tonight, the influences of our community for being the name as well as here tonight is humbling. There’s some many other people who deserve this award more than I do. So many people that work so hard to protect you each and every day and I thank you for this award,” said King.

Kalan wasn’t a fan of the idea to purchase the building until Grant convinced her otherwise.

“Grant, who is not from here [and] who is a city boy, he saw what the potential for that was,” she said. “I think the testament to Tahlequah is that a city boy like Grant can come in and see the potential and what can be based on what it used here.”

Grant called Tahlequah a special place that has potential and asked that people pitch in and be part of the growing potential in the community.

Realtor Suzanne Myers, Community Champion of the Year, said she’s appreciative of what she’s accomplished and what’s she earned.

“There’s probably several of you, if not more than that, in the room who are deserving of this honor,” said Myers. “Receiving recognition for an honor such as a Community Champion, it’s amazing. When you look at where we live, it’s easy to see how things happen.”

Myers said part of her role as a professional realtor is to tell potential residents about the positives of the community.

“The dreams and efforts of those I mentioned tonight make this part of the introduction of Tahlequah so easy,” she said.

Jennifer Yerton, with Farmers Insurance, was awarded Volunteer of the Year for her part in serving on numerous committees within TACC and more. She thanked her fellow Chamber ambassadors and gave a special shoutout to her mother, who was in the audience.

Tru Hotel Holiday Inn was awarded Excellence in Tourism this year, and Traci Huggins told the crowd she enjoys what she does daily.

Boys and Girls Club of Tahlequah was awarded for this year’s Non-profit of the Year.

Berry touched based on a year he called unprecedented, and what it's been like for everyone.

“What’s the silver lining, what’s the brighter side? One is innovation at an all-time high. We figured out new ways to get the same work done,” he said. “Second would be collaboration – absolutely together we can do more.”

Berry explained how Reed’s position was created and how that position has changed for the good.

“I just want to say that Tahlequah is positioned for great growth and great change. Some residents aren’t happy with both of those, saying, ‘If you want to live in a bigger town, then you should move. I like Tahlequah just the way it is,’” said Berry.

Berry reminded everyone that change will occur and there’s a role for everyone when that time comes.

Reed has been in his role for a year and he can see why Tahlequah is growing into the community that it is.

“Community and business leaders like the ones we celebrated here tonight, they have a passion for this community and want nothing more than to see continued improvement. Tahlequah’s bright future will only continue to be brighter,” said Reed.