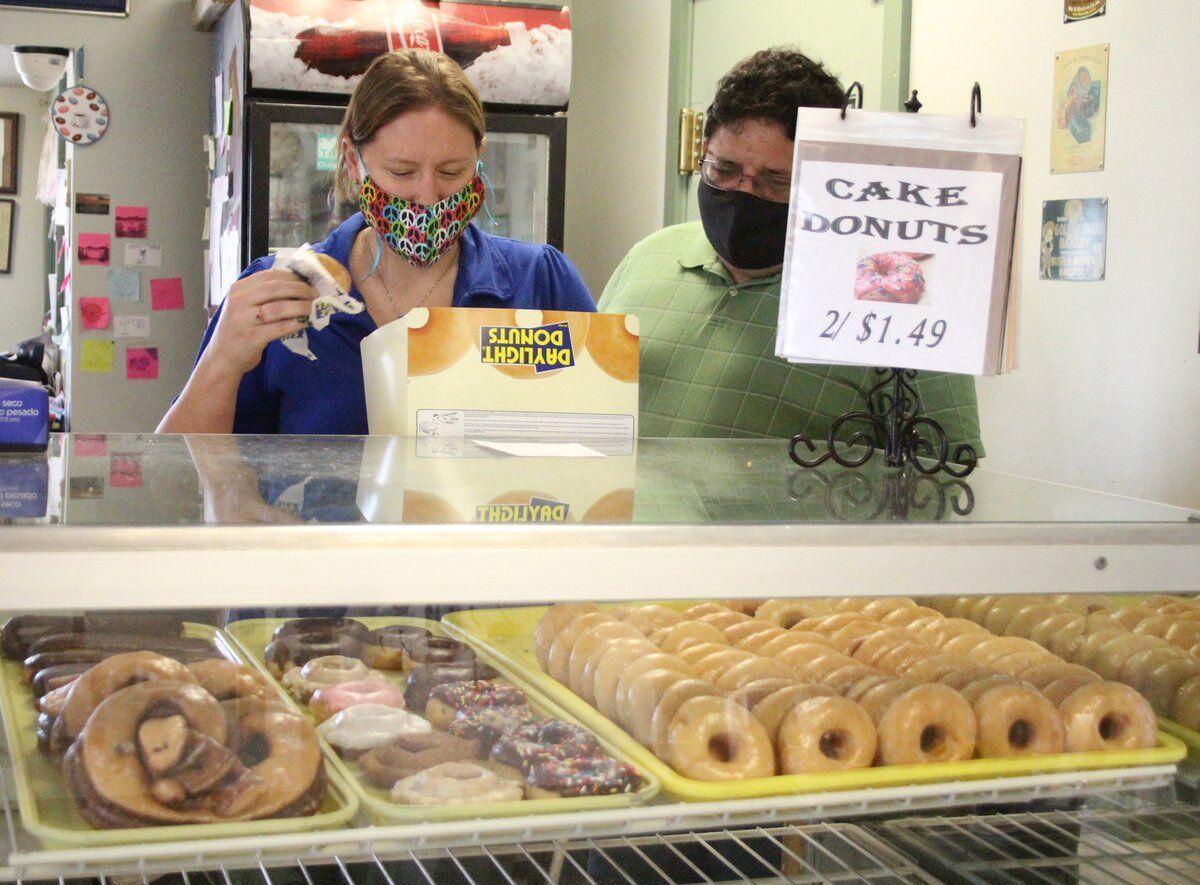 Sarah and Bryan Bryant fill an order at Bryant's Daylight Donuts in Tahlequah. 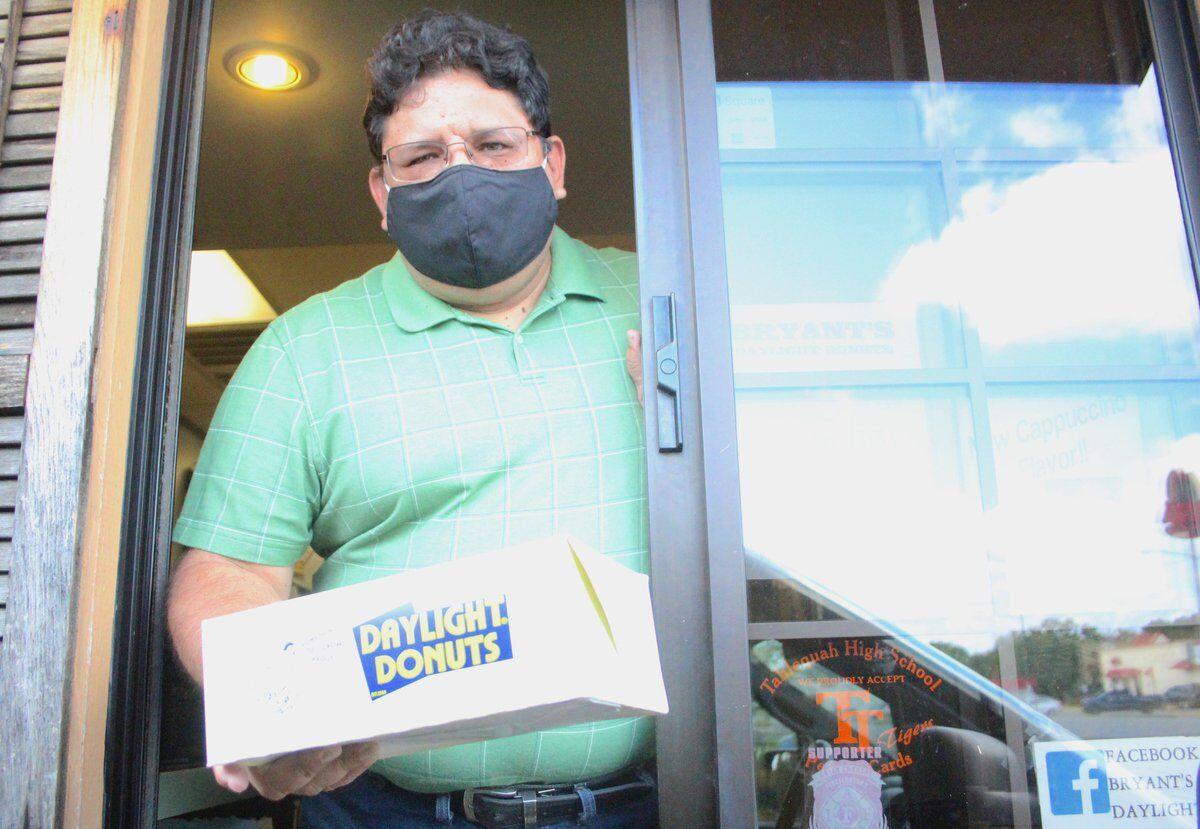 Bryan Bryant hands an order of donuts out of the drive-thru window at Bryant's Daylight Donuts in Tahlequah.

Sarah and Bryan Bryant fill an order at Bryant's Daylight Donuts in Tahlequah.

Bryan Bryant hands an order of donuts out of the drive-thru window at Bryant's Daylight Donuts in Tahlequah.

Local doughnut shops saw a decrease in business, and a well-established bakery closed it doors, but local residents with a sweet tooth were not about to let them fall flat due to the COVID-19 pandemic.

Bryant’s Daylight Donuts has been serving breakfast for nearly 32 years in Tahlequah. However, owner Bryan Bryant said if it weren’t for the business’s drive-thru service, his shop would not have made it through the pandemic. He said doughnut shops are a prime example of volume businesses.

“I feel sorry for businesses that rely only on people coming in, because there’s just no way to do it for a place like a doughnut shop,” said Bryant. “Doughnut shops are different than a lot of restaurants, in that we have to have a major volume of people. If you think about how much you spend at a restaurant, it could be $15 or $20 per person. You could spend $8 and feed a family at a doughnut shop.”

The virus outbreak has caused multiple disruptions for Bryant’s. It typically sells doughnuts to convenience stores around the county, but with residents traveling less than ever, gas stations don’t have anyone to sell the pastries to. Bryant said he still has not seen a return in that business. An annual event at Northeastern State University, Merchant Mall, typically gives Bryant's a chance to introduce itself to incoming freshman, but that event was canceled.

The pandemic has also forced Swift Eckrich to close down its processing plants, from which the shop gets its sausages to make popular sausage rolls. Bryant said he’s driven all over Tulsa and the surrounding area looking for sausages.

“When we can’t get the sausages, there’s nothing we can do about it,” he said. “Some people could understand that and some people, I think, got upset with us, but when Swift Eckrich shuts down, what am I to do? I don’t really have an option.”

Bryant’s Daylight Donuts is now open inside with limited seating, but has continued to see a large amount of its business in the drive-thru lane, where customers can get doughnuts, bars, cinnamon rolls, ham and cheese croissants, sausage rolls and more.

“Generally, if you have a sweet tooth, it’s a great place to go in the morning,” said Bryant.

On Main Street in downtown Tahlequah, Morgan’s Bakery has stood the test of time. It has long served up an assortment of breads, doughnuts, pastries, cookies, and more. But due to the coronavirus, it closed its doors for two to three months. Fortunately, it’s a popular establishment among locals.

“So when we first opened back up, it was really crazy,” said Jeremy Langston, manager. “Our Tiger cookies are our most popular thing, and we’ve probably tripled our sales of Tiger cookies every day from what we had been doing.”

Morgan’s has kept dishing it up to hungry customers through curbside service only. People can call ahead and their orders will be brought to them upon arrival. The bakery has doughnuts, breads, dessert cake, danishes, pastries, and more. Langston said the cream horns and 4 o’clock cookies remain popular among patrons.

When the city first told businesses to shutter, Sunrise Donuts went drive-thru only for two to three months, and Sunrise Donuts 2 closed up shop. With concern among the community over the virus, things were slow-moving at first. Manager Jason Coffelt said the first week or two, the shop was doing about half the sales it would have on a typical slow day.

“Then a week after that, we started getting really, really busy,” he said. “I think people started getting tired of eating at home, so our drive-thru line would literally be around our building and into the street for like three or four hours at a time.”

Business has remained slow at the second Sunrise Donuts location, on Muskogee Avenue near Rum Runners, but the main store on Downing Street is a popular establishment. The kolaches likely helped, as Coffelt said it’s easily the most popular item at the shop. On average, the business goes through five to seven pans a day, with each pan holding about two dozen kolaches.

“So that’s a ton of rolled weiners in dough,” Coffelt said.

Other popular items at Sunrise are the maple Long Johns and apple fritters. It also has a bevy of drinks, including lattes, frappes and boba teas. Patrons can also order breakfast burritos at the location on Downing.

Coffelt said he is very thankful for the community support.

“We could have closed down,” he said. “That could have been a thing if we didn’t make enough money, but people continued to support us and we’re really thankful for that. It’s a certain kind of tradition that when people get up in the morning and they have to have their doughnut and coffee.”