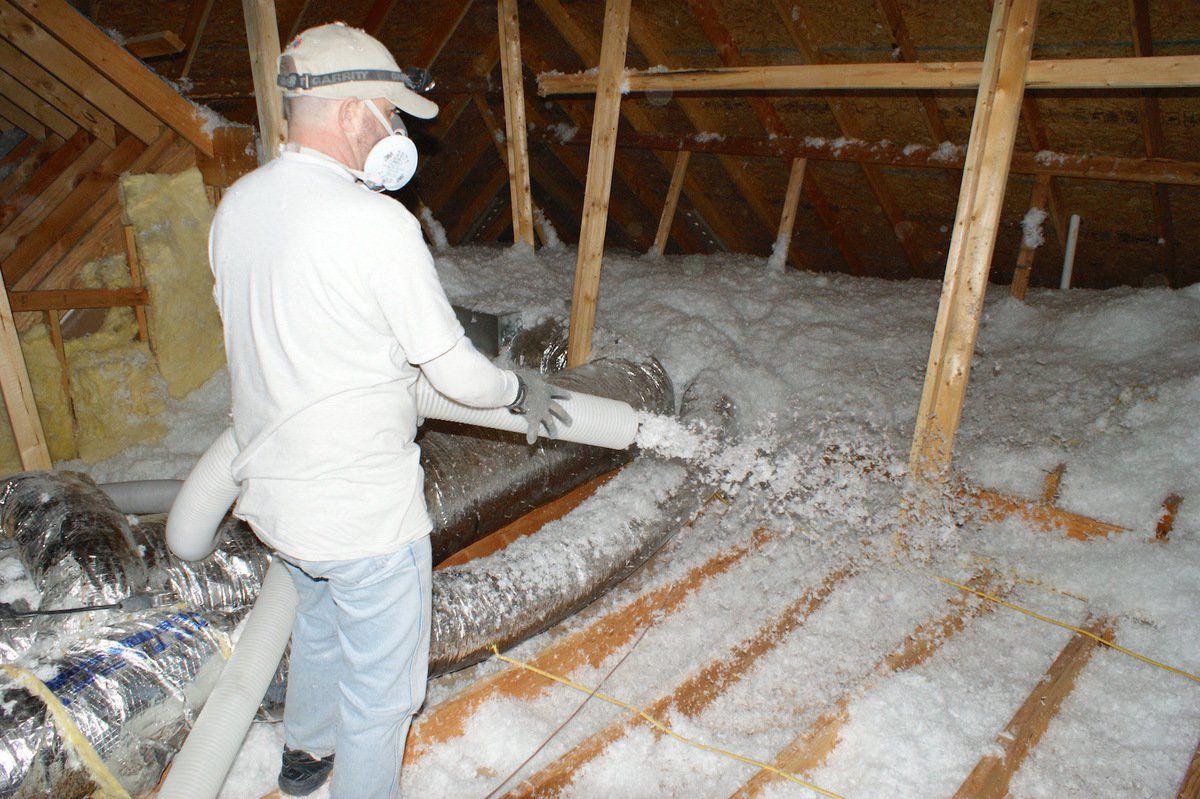 Jim Wilson blows in fiberglass insulation into an attic. This can save heat and money over the years. 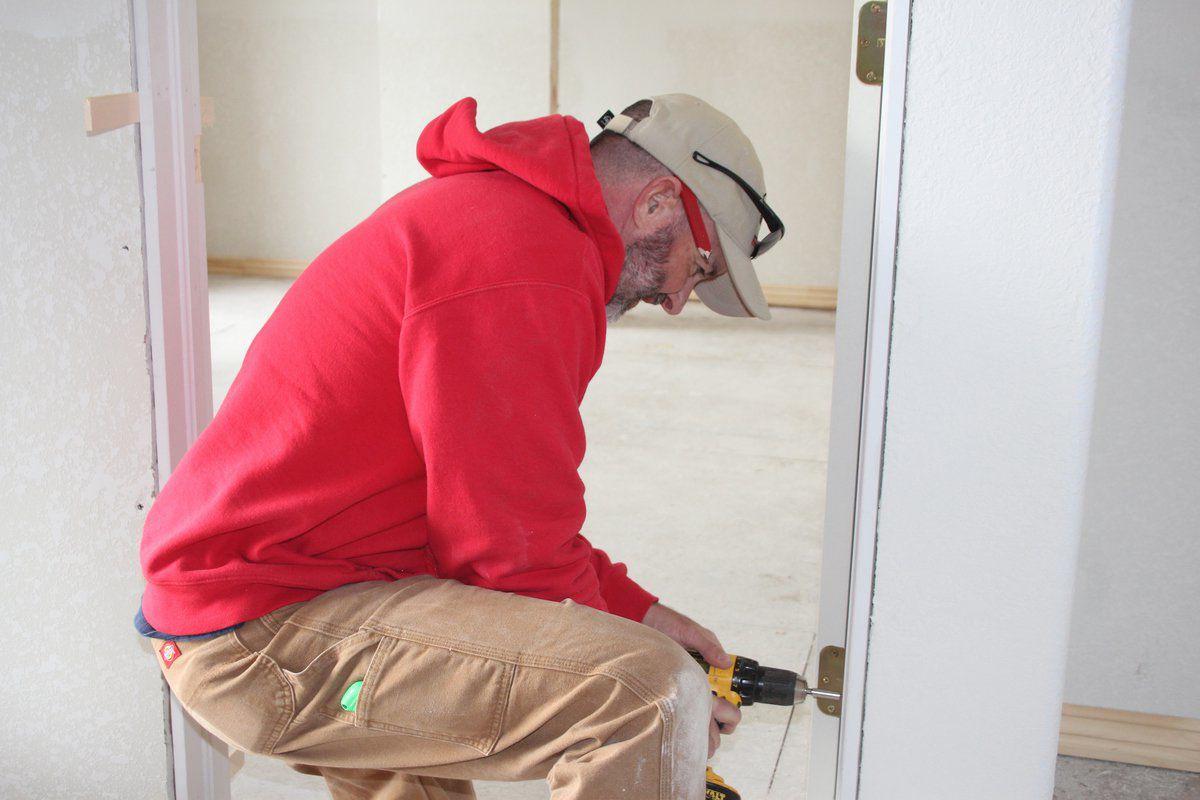 Jim Wilson of Tahlequah Lumber works on installing a new door. Home improvements can save a homeowner money and stress.

Jim Wilson blows in fiberglass insulation into an attic. This can save heat and money over the years.

Jim Wilson of Tahlequah Lumber works on installing a new door. Home improvements can save a homeowner money and stress.

Home improvements can make a domicile look and feel better, as well as be safer for families.

In the colder weather, people may notice higher utility bills or drafts in their homes. Jim Wilson, who has been with Tahlequah Lumber for eight years, said a lot of it has to do with poor insulation.

"We do a lot of insulating attics this time of year with the cold. It's when people notice that their utilities are high. A lot of attics are bare bones or haven't had insulation in 30 years, or at all," he said.

The blow-in fiberglass goes in all of the open areas, and it is heat- and pest-resistant.

Wilson recommends that homeowners have house insulation checked at least every five years.

"Fiberglass can mess with a person's breathing, but not like it used to be. They have come a long way with quality," he said.

While doing free estimates, Wilson has discovered homes with electrical or heating and air problems, as well as leaks in roofs. Most times, he encourages the person responsible for the home to fix those issues before putting in insulation.

"Once I blow the insulation, I don't want anyone going in to mat it," he said. "Undisturbed, it will not fluctuate more than a fourth of an inch."

Working the other way, Wilson said Tahlequah Lumber gets a lot of referrals through electricians and heating and air contractors who notice that homeowners do not have adequate insulation.

The cost of insulating an attic pays for itself in the long run, according to Wilson.

"An average additional 6 inches of insulation over 1,000 square feet can cut 25 percent off a utility bill. I know from personal experience," he said.

Homes in the Tahlequah area range from having 1,000-3,000 square feet of attic space. Wilson said he can install 12 inches of insulation in 1-1/2 hours.

"You can do it yourself. We have the equipment and do rent small hoppers. But we have a big hopper and hoses to blow it in," said Wilson.

The fiberglass batting is better for inside walls.

"There is a vapor barrier on the back of the batting. It can still get air flow, even with sealant on it," said Wilson.

Insufficient windows can cause 20 percent of heat or air to be lost, but bad or no insulation can lead to an 80 percent loss.

Another cause of heat and air loss is drafty windows, doors, and areas around fireplaces. Wilson recommends applying weatherstripping, caulk or even plastic sheeting.

"Our Handy Man service can come apply the weatherstripping. There is plastic you heat up with a hair dryer, and it sucks up so it doesn't look so tacky," said Wilson. "We have different types of caulk. Talk to the paint department and tell them what you are caulking around - windows, wood, brick.

Mark Sweeney, owner of Hearth and Pool Services, said he is still getting calls to service gas fireplaces, but most people have already had their fireplaces and stoves cleaned by this time of year.

"If not, they need to have their chimneys cleaned. We still a good product called ACS that is very helpful in preventing creosote buildup in your chimney. That's a good practice to get into, using something like that," said Sweeney. "The chimney cleaning log does not work. Please, don't waste your money."

Paul Deardeuff has been with Tahlequah Lumber for four years, but he has over 20 years of experience in the field.

He said that lately, area residents are focusing on getting new floors and doors.

"New flooring changes the look of the house. As soon as we put new flooring down and polish it, it looks a thousand times better," said Deardeuff. "We also replace subfloors that have gotten worn down."

Besides changing the look of an entryway, an exterior door can add security and save energy.

"They want a better seal, so instead of replacing the weatherstripping, they put in a whole new door. It's cheaper to replace the whole door than pieces over time," said Deardeuff.

Vinyl snap-together flooring that looks like wood planks is the trendy right now for multiple reasons, according to Deardeuff.

"It has a nice look. It's a floating floor so it moves with the temperature and expands," he said. "It's waterproof and that's a big seller. When you spill water on older wood floors, it causes it to swell up and gets ridges where the boards come together."

For those looking ahead to warmer weather and wanting to ready their pools, Sweeney recommends contacting Hearth and Pool by April 1.

"Everybody wants to open up on May 15, and that just can't happen, can it? Opening a pool usually means we uncover it, clean the cover, stow it, and clean up the pool. We also balance the water and fix any leaks or anything we can find with the equipment wrong. Chemicals and parts are all extra," he said.