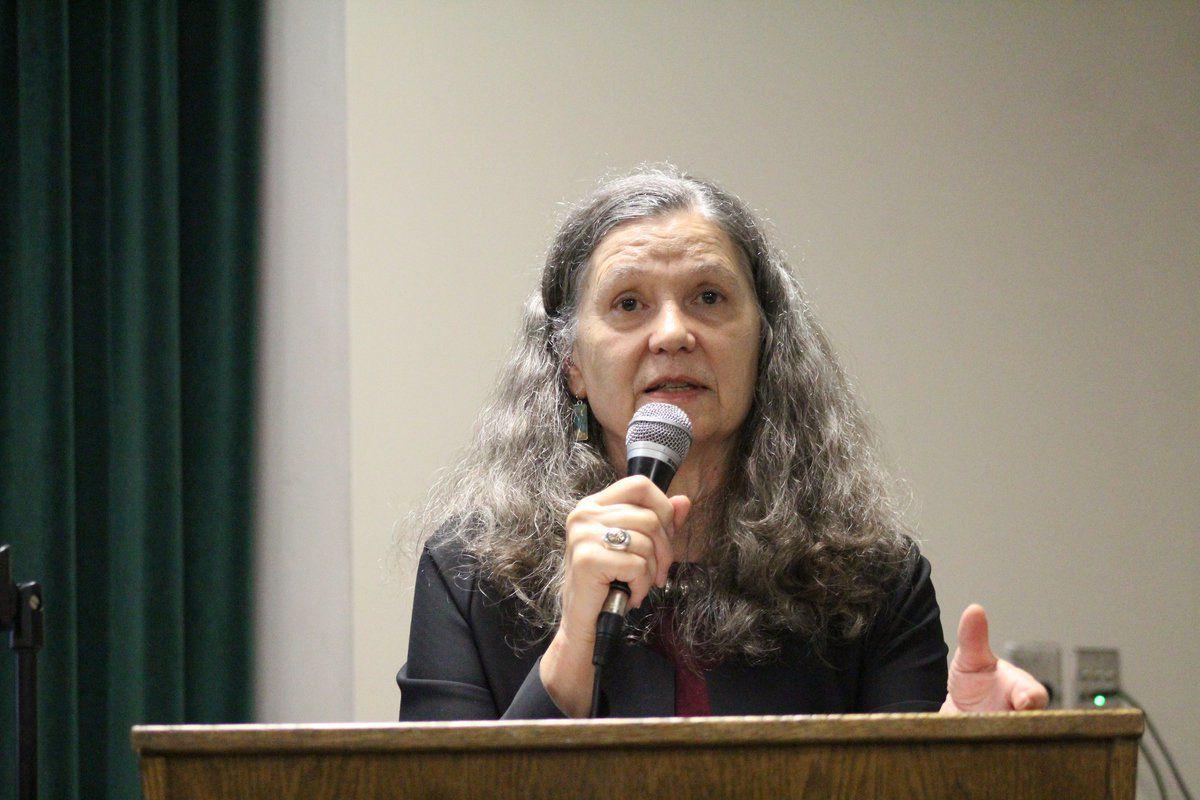 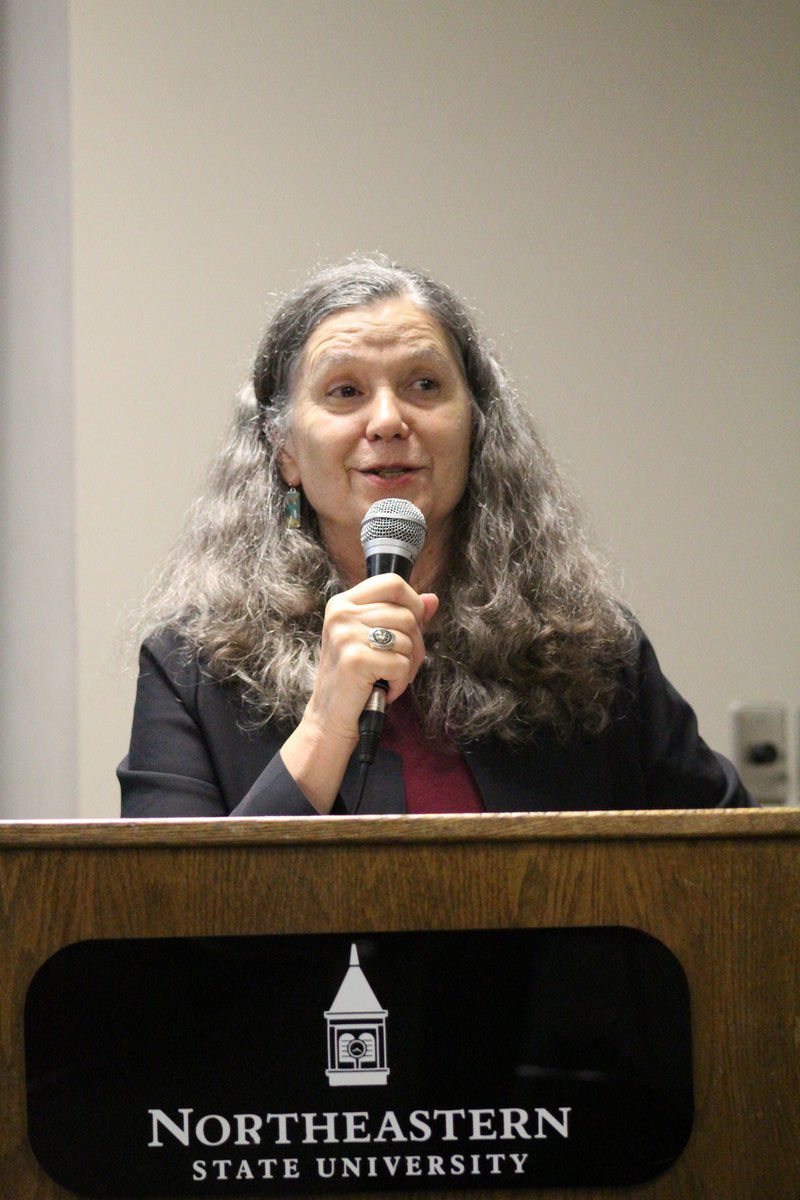 A pending case before the U.S. Supreme Court has captured the attention of many in Northeast Oklahoma, since it will address the question of whether Congress disestablished the Muscogee Creek Nation reservation.

An Oklahoma man charged with murder and sentenced to death in state court in 2000 is fighting for his life. His lawyers have argued his tribal status as a member of the Muscogee Creek Nation – and the fact he committed the crime on Indian land – means he should have been tried in federal court, where federal law prohibits imposition of the death penalty on Indians.

Patti Palmer Ghezzi was counsel of record in the case of Sharp v. Murphy, which she argued before the 10th Circuit Court of Appeals. She delivered a presentation on the case at Northeastern State University Wednesday.

Ghezzi was assigned to the case 11 years ago after having worked in Indian law previously. At the time, she said, the Eastern District Court of Oklahoma had already ruled on the issue.

"They said what most people thought, which is that there’s no Indian reservations in the eastern part of Oklahoma," she said. “Well, I had not believed that, even at the time Judge [Ronald] White ordered it."

“The thing that worries the state of Oklahoma the most, I think, is that a big part of Tulsa is within those boundaries,” said Ghezzi. “If you happen to look at the Supreme Court briefs, the Supreme Court petitioner on the very first page of her brief has a picture of the Tulsa skyline, because it is essential to the state’s position that all hell is going to break loose – the sky is going to fall if the Creek Nation boundaries remain intact.”

Ghezzi discussed how the case had evolved from Judge White’s view – which was accepted by most that there are no reservations on the eastern side of Oklahoma – to waiting for another Supreme Court hearing.

In the 1970s, a group of lawyers sought to prove the Creek Nation’s government was still intact.

“There was a sense in Oklahoma, especially up until the '70s, that the Five [Civilized] Tribes had been terminated – that they didn’t really exist, they didn’t have governments, they didn’t have courts; they were essentially a relic of the past,” said Ghezzi.

In the Harjo v. Kleppe case of 1976, the group of lawyers faced the Department of the Interior, which at the time took the position the Creek Nation did not have a government. The court ruled that “despite the general intentions of the Congress of the late 19th and early 20th centuries to ultimately terminate the tribal government of the Creeks,” the final dissolution of the tribe’s government created by the Creek Constitution of 1867 was never statutorily accomplished, and that the Creeks did, in fact, still have a government.

“Then the next step was for young Indian lawyers to show that the Creeks had a court and that they were entitled to a court to handle civil and criminal [cases] within their jurisdiction,” said Ghezzi.

The Creek Nation captured another victory in the courts. In the case of Muscogee (Creek) Nation v. Hodel, the tribe successfully obtained recognition of its inherent sovereign authority to re-establish its court system. Another court decision in 1987, which impacts Ghezzi’s case, came up in Indian Country USA v. Oklahoma.

Ghezzi said the federal government would never quite give up its view point of Indian Country, and at one point in 1992, the 10th Circuit Court rejected a “frequently raised, but never accepted argument, that Oklahoma retained jurisdiction over crimes committed by Indians in Indian Country.”

“This is the same argument the U.S government is making today,” she said. “The same argument that has been frequently raised, but never accepted. Now whether or not that will play out in the Supreme Court, we’ve yet to see.”

In the 1990s, multiple court battles ensued between tribes and the Oklahoma Tax Commission. After the tribes had won a few cases, there began a shift among tribes in the state to expand their reach. Governments and courts were expanded, as well as tribal economies. Ghezzi said it was around that time the state decided that instead of litigating and fighting these battles, their interests would be better served by trying to work out cooperative agreements.

“So there was this period where that was happening, but no one really wanted to push the criminal jurisdiction issue, because that was considered to be sort of dangerous thing, and if you lost it, you might be losing lot more than just the authority to prosecute Indians for the minor crimes that occur in Indian Country,” she said. “So what was left for us to do was try to crush this myth that there are no reservations in eastern Oklahoma.”

The second in this two-part series on the case of Sharp v. Murphy examines the impact it could have on the state and tribes, and the status of its pending U.S. Supreme Court appearance.