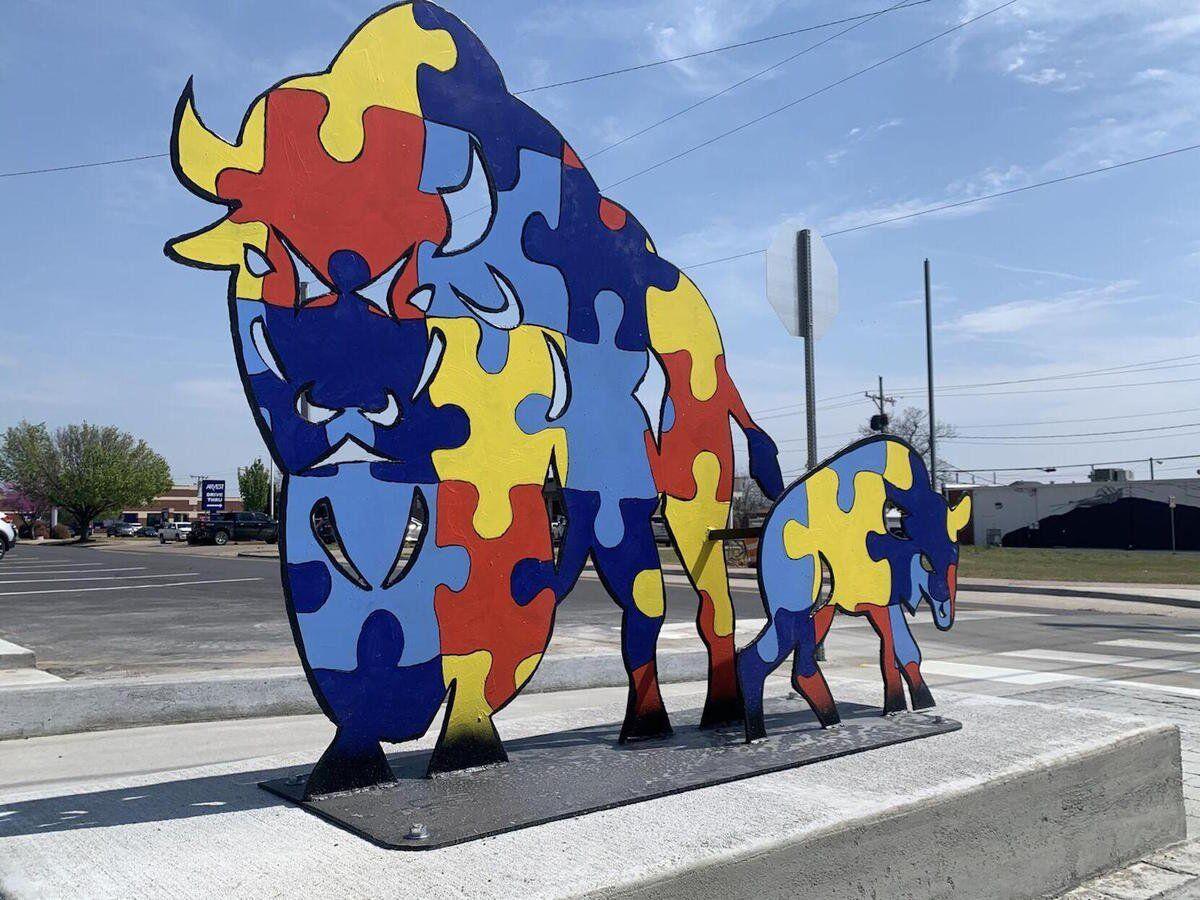 McAlester city employees have created a metal sculpture of a buffalo and calf painted like puzzle pieces to mark Autism Acceptance Month. Though some in the autism spectrum disorder community dislike the puzzle pieces as a symbol, the pattern and colors are meant to reflect the complexity of the spectrum and the diversity of the people and families living with ASD. 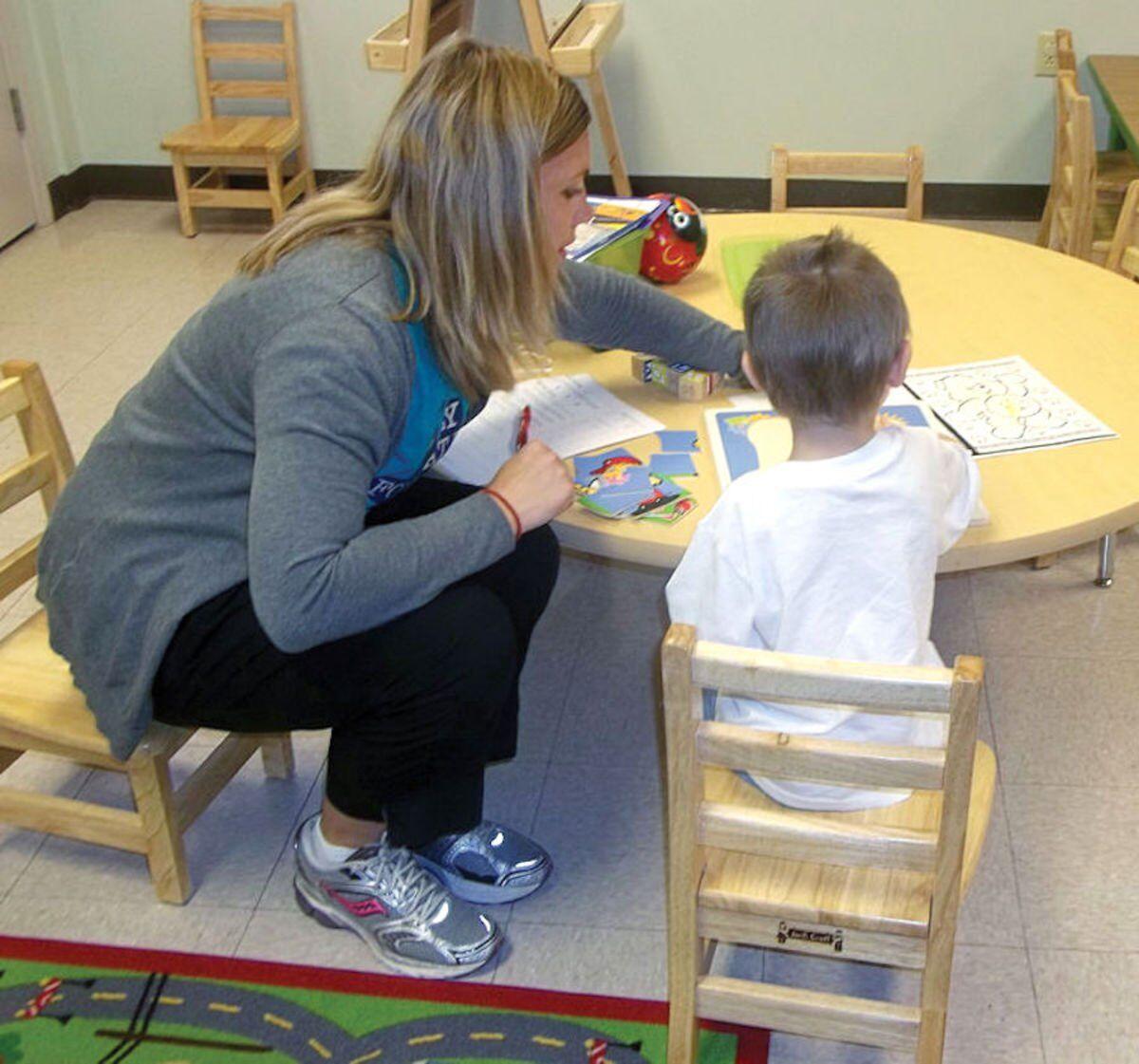 Gina Babka-Bryan, licensed clinical social worker, left, engaged a child as he worked a puzzle during a 2014 autism screening. The American Academy of Pediatrics recommends that all children be screened for autism.

McAlester city employees have created a metal sculpture of a buffalo and calf painted like puzzle pieces to mark Autism Acceptance Month. Though some in the autism spectrum disorder community dislike the puzzle pieces as a symbol, the pattern and colors are meant to reflect the complexity of the spectrum and the diversity of the people and families living with ASD.

Gina Babka-Bryan, licensed clinical social worker, left, engaged a child as he worked a puzzle during a 2014 autism screening. The American Academy of Pediatrics recommends that all children be screened for autism.

In 2018, the Centers for Disease Control and Prevention estimated that one in 54 children aged 8 years had been diagnosed with autism spectrum disorders, and boys are four times more likely than girls to have the disorder.

While ASD can be diagnosed at any age, most symptoms appear within the first two years of life, according to the Oklahoma Autism Network. The Diagnostic and Statistical Manual of Mental Disorders uses "autism spectrum disorders" as a general term which includes autism, Rett syndrome, Asperger syndrome, childhood disintegrative disorder and "pervasive developmental disorder not otherwise specified."

Each of the disorders is a neurological disorder which can affect a child’s ability to communicate, relate to others, understand language, and play. The type of symptoms and abilities can vary widely from person to person.

Local educator Barbara Fuller said her family’s experience with ASD diagnosis and treatment were different than some others might have, mainly due to the age of her child, Piper, who has Asperger syndrome.

“We did not have her tested until she was 15 years old. I was always able to follow her line of thinking and it always made sense to me. Suddenly, I couldn't follow her brain and it scared me,” said Fuller. “We went to a private doctor because she did not want to go through the school. She saw it as a stigma and she wasn't wrong. Most teachers were extremely accommodating without an IEP but peers were the most difficult to deal with. As a family we tried to find resources in Cherokee County and at the time, there were none. Asperger's affects social skills and at that age, social is what most teens are focusing on.”

A mother of an autistic Tahlequah High School freshman, Kira Fell said the only resources they have used have been through the school district. These have been speech, occupational and physical therapy.

She said she wishes she had known at the beginning how hard it would be to have a child diagnosed with ASD.

“The hardest part is it’s a 24/7 for the rest of your life,” she said. “I want everyone to know each child is different and their journey is their own.”

April has been known as Autism Awareness Month, but some disability organizations are switching to proclaiming it Autism Acceptance Month.

“While we will always work to spread awareness, words matter as we strive for autistic individuals to live fully in all areas of life,” says Christopher Banks, president and CEO of the Autism Society of America. “As many individuals and families affected by autism know, acceptance is often one of the biggest barriers to finding and developing a strong support system.”

Fuller knows too well how the support of others is important. Although many people, even some close to the family, were unsupportive, Fuller said they finally found help with Dr. Lisa Bisogno at Northeastern State University.

“She directed us to family support groups online. I wish we had a therapist in town that worked with teens on how families can communicate and how families can learn and help – resources for those that aren't diagnosed early,” she said. “My oldest had spinal reconstruction surgery when she was 13, and there were prayer circles and notes of love and so much support. Then we found out Piper had Asperger’s and there were crickets. No love, no support, and people would just walk away from her or from me. It really showed us what happens with silent diseases. If one cannot see it, it must not exist and we certainly don’t talk about it. Comparing the two, Piper’s medical issues were and still are the hardest thing we have ever done.”

Fuller encourages everyone to have awareness, as they are likely to know someone diagnosed with ASD.

“Be aware that it is a silent disease. Be aware that parents need your support. Be aware that when you are in someone’s life, you are there for everything, not just those things you understand or see,” she said. “And by the way, she has always been the coolest kid because her mind works so differently; she’s a blessing from God. I hope none of you have missed blessings from children with autism because you chose not to be aware and supportive.”

Piper is now 21 and was at college until the pandemic brought her home. She has been setting up a recording studio in guest bedrooms.

Just like kids and adults without an ASD diagnosis, many who have it are creative and some do look for social relationships.

The Tahlequah Community Playhouse’s Penguin Project gives all children an opportunity to work in theater, on or off stage. Mentors are paired with actors who have disabilities and they all perform together.

“I think our cast members that fall on ASD add a richness to the performances. We all learn from seeing each other and seeing the world and theater experience differently,,” said Peggy Kaney, director. “We all gain from learning from getting to know people that have different experiences.”

She noticed that generally, actors with ASD had an easier time learning their lines and blocking, and they were consistent with it. She said one thing that sticks out in rehearsals is how some people react to the play.

“The reactions were surprising. Different cast members saw the play differently. What they find funny is different depending on who they are. That’s part of the beauty, especially in Penguin, there are so many different disabilities represented,” said Kaney. “The broader sphere we all experience, the better for all of us.”