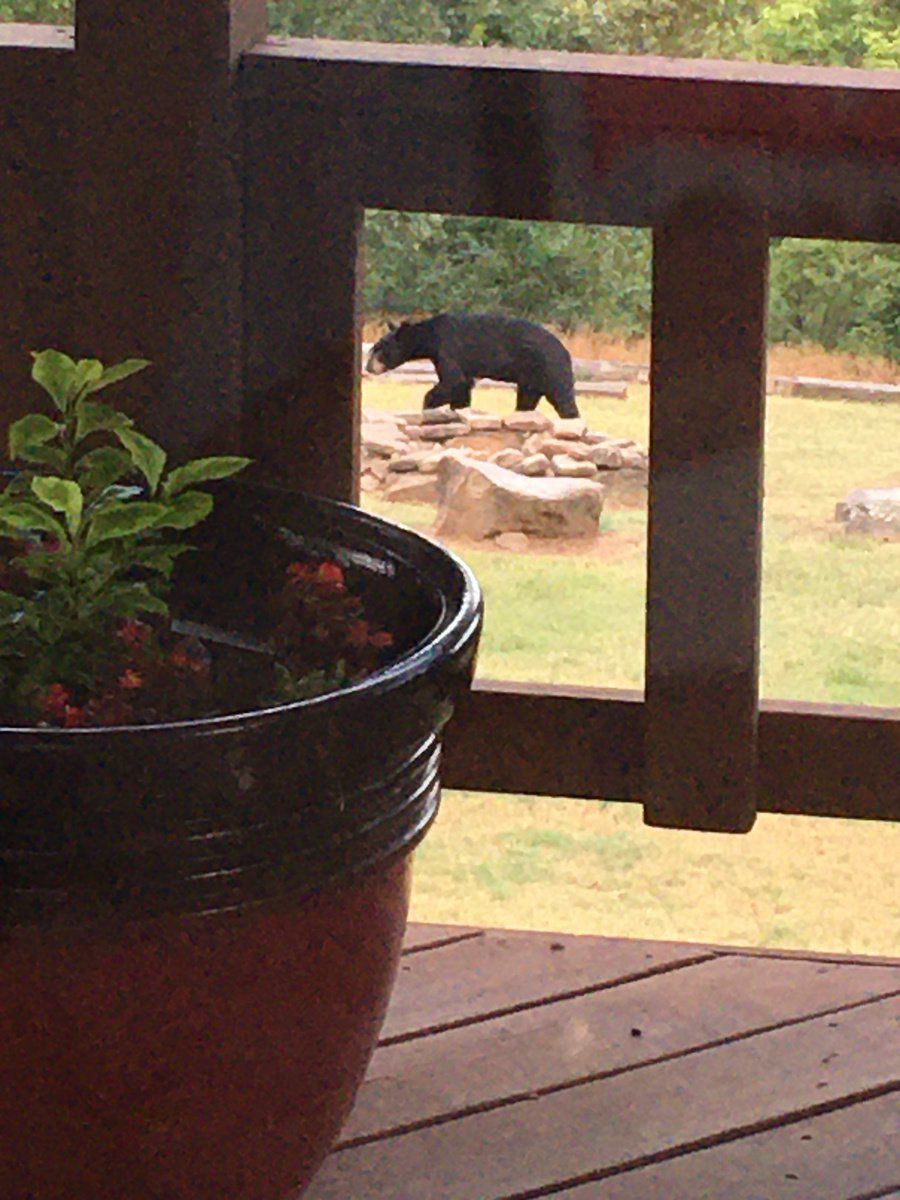 Judy Bollinger saw a bear in her yard in the Snake Creek Wilderness area recently. 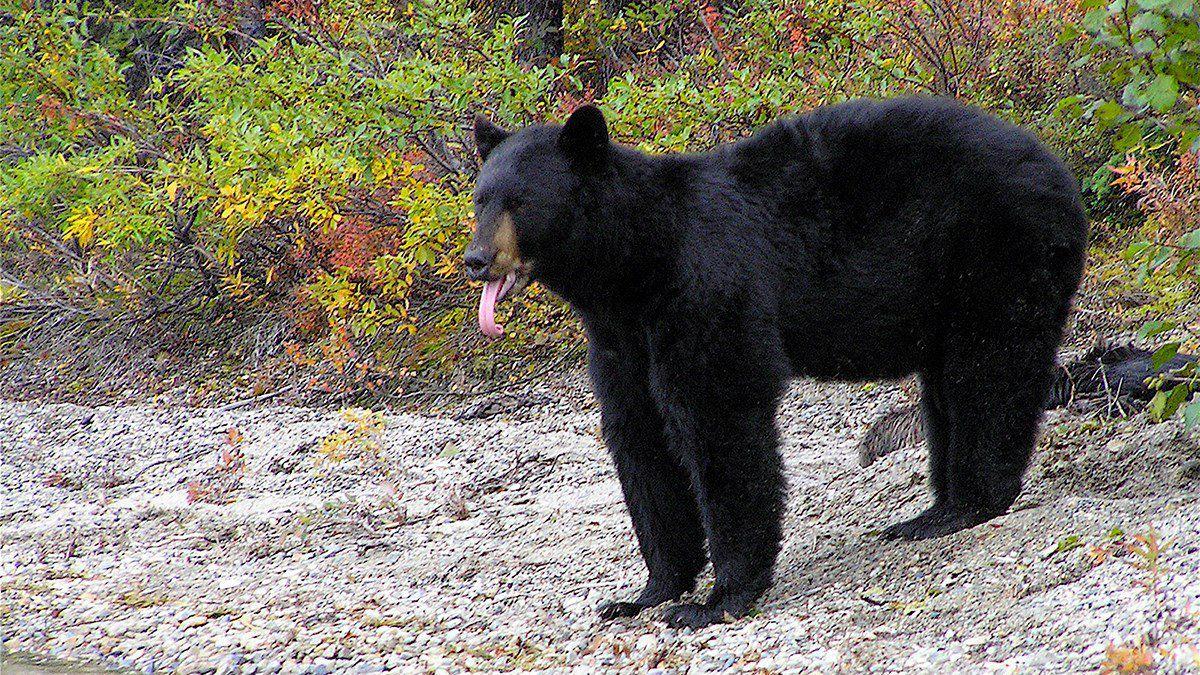 Black bears have become a common sighting for residents around Lake Tenkiller and the Cookson area.

Judy Bollinger saw a bear in her yard in the Snake Creek Wilderness area recently.

Black bears have become a common sighting for residents around Lake Tenkiller and the Cookson area.

It had been barely a month since the last time Judy and Matt Bollinger saw their woodland friend, when on Monday morning, July 6, the visitor sauntered down near the couple's berry patch they were sure he would decimate.

It was a black bear the couple had seen on multiple occasions, and if he was hungry enough to start plucking the fruit from its bush, they weren't going to stop him.

"I just knew he would go over there and eat the berries, but he didn't," said Judy. "He's welcome to them if he wants them. I'm not going to fight him."

It was one of many black bear sightings that have occurred around Lake Tenkiller. And while some residents have reportedly been anxious about living in close proximity to such a large mammal, many others are happy to have the creature grace their property. The Bollingers, who live in the Snake Creek Wilderness area, don't have a problem with the bear they've started calling "Yogi."

"His coat is so shiny and thick, and it's just a beautiful animal," said Judy. "So as long as I'm not outside when he's out there, I'm good with him."

Black bears are considered to be speedsters, although they might not look it, and are particularly adept at climbing and swimming, which could be one reason they enjoy the lake area so much. Accounts of their presence have prompted some to start leaving firearms and other weapons by their front doors, but for the most part, area residents don't appear to be too much on edge.

Tonya Thompson last saw a bear on her property near Chicken Creek Road two weeks ago, but she thinks the fireworks from Fourth of July celebrations may have scared him off.

"The two times we did see him on our property, as soon as we open the door, he takes off," she said. "He's just after the bird seed and the hummingbird water, but he's torn a few things up getting his little goodies. He's not aggressive at all."

While the animals once roamed all across North America, bear sightings became rare in Oklahoma in the early 1900s. According to the Oklahoma Department of Wildlife Conservation, land use changes, coupled with unregulated hunting, led to a diminished population of bears. However, a reintroduction of around 250 black bears into the Ouachita and Ozark Mountains of Arkansas in the late 1900s has helped replenish the number of bears in Arkansas, Missouri, and Oklahoma.

The frequent sightings and up-close encounters have made some people question whether there should be a hunting season for bears in Oklahoma. Arkansas renewed its black bear hunting season in 1980.

When a ranger from the Cookson Wildlife Management Area visited Linda Paxton a couple of years ago to see if she wanted some wayward bears gone, she said they were not disturbing her peace.

"They didn't give me any concern and they didn't bother me," said Paxton, who lives around Elk Creek. "He was over there messing around where we fed the deer. The last one was pretty big and came clear up to the house, but he didn't bother anything."

Paxton compared the size of the bear she saw to that of a cow. She hasn't been too distressed when trying to capture them on video, either. The last time she saw one, she walked onto her deck to get a closer look.

According to experts, black bears don't tend to roam very far from home. Although there have been recordings of black bears traveling more than 100 miles, typically a female might have a range of about two to six miles, while a male could range up to 15 miles.

Thompson doesn't think the bear her family has seen wanders too much.

"Our neighbor behind us told us where he thinks he stays, and it's in a patch of trees right behind him," she said. "He seems to have a pretty short span of where he's going, because I have neighbors out in front of me and on the other side of me who have feeders out, and he hasn't bothered them."

There are a variety of reasons why a bear would venture onto someone's properly, but the main one would likely be the scent of a nearby trash can, deer feeder, or bird feeder. Bollinger thinks Yogi can smell the remnants of their deer feed, but this year, he might have also smelled something coming from their house.

"This is the first time he came closer to the house, acting like he was going to walk up to the front," she said. "My husband said we had the garage door open and better close it. Well, that scared him away when he heard it."

They are used to seeing foxes, coyotes, and assortment of other wildlife, so the Bollingers keep an eye out when they're working outside. Judy admitted that if they had small children or pets, the sightings might leave them with more safety concerns. Neighbors or guests might have a different opinion, especially if they mistake the board silhouette of a bear that Matt made for the real thing.

"He's trying to make people think that's a bear," said Judy. "He's put it in the edge of the yard so that when people are driving by, they'll think it's a bear there. So he's quite the prankster."