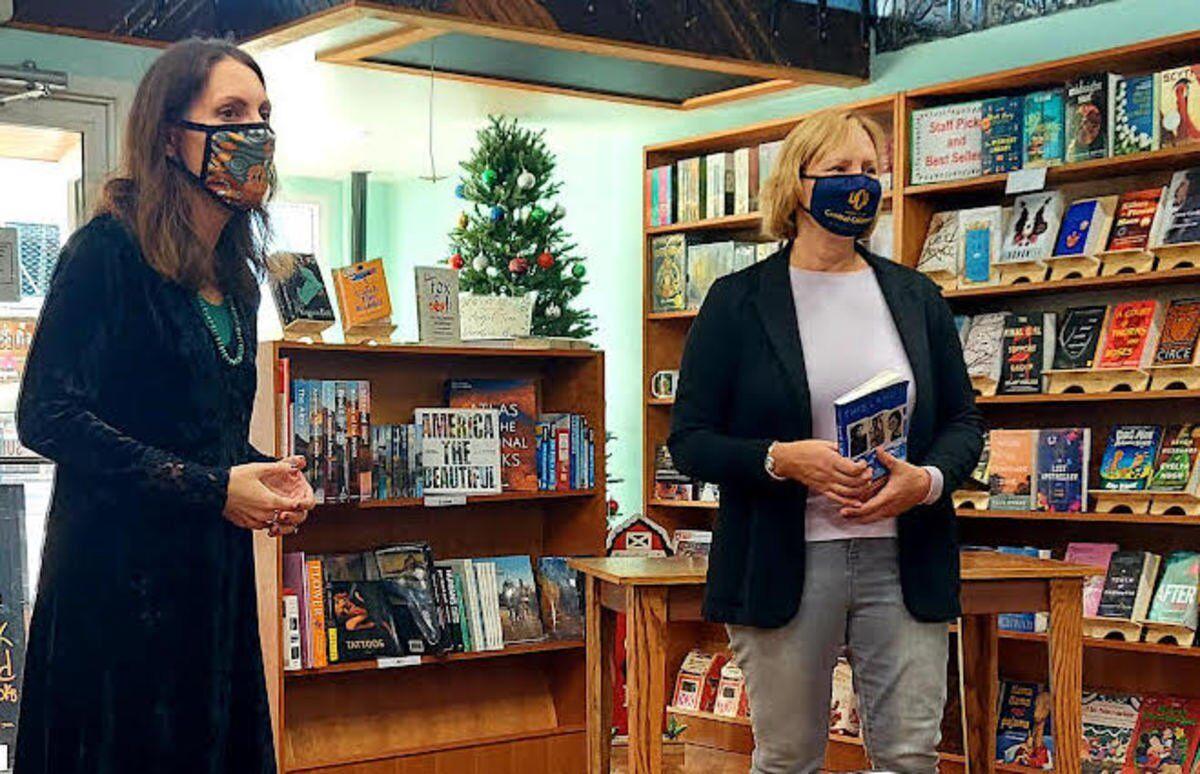 Dr Farina King, left, and Dr. Patti Loughlin discuss their upcoming book, "This Land is Herland." In King's chapter, she addresses Rachel Caroline "Callie" Eaton, who was a Cherokee activist and a seminarian the Cherokee Female Seminary. 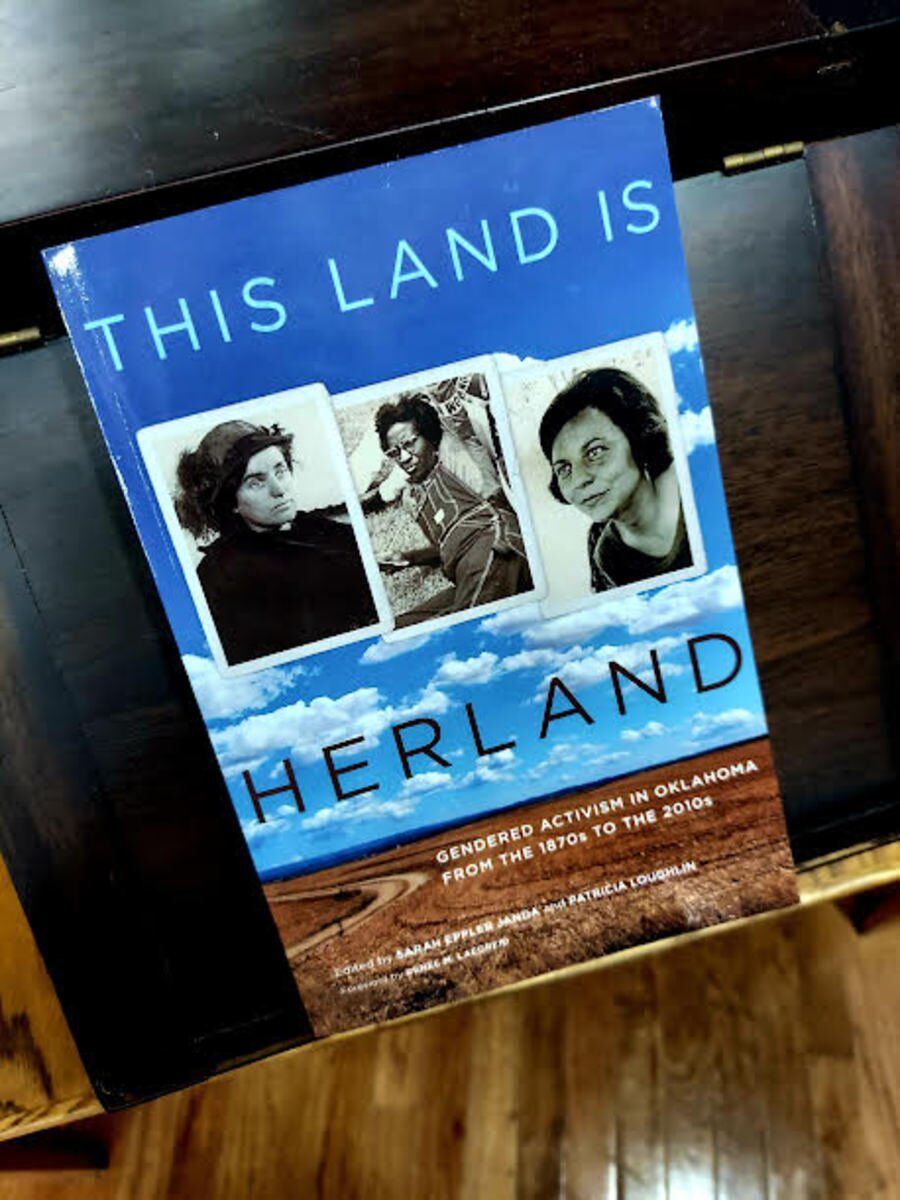 This Land is Herland was published by the University of Oklaahoma Press and addresses the stories of thirteeen women activists, including Rachel Caroline Eaton, a Cherokee citizen who attended the Cherokee Female Seminary in Tahlequah.

Dr Farina King, left, and Dr. Patti Loughlin discuss their upcoming book, "This Land is Herland." In King's chapter, she addresses Rachel Caroline "Callie" Eaton, who was a Cherokee activist and a seminarian the Cherokee Female Seminary.

This Land is Herland was published by the University of Oklaahoma Press and addresses the stories of thirteeen women activists, including Rachel Caroline Eaton, a Cherokee citizen who attended the Cherokee Female Seminary in Tahlequah.

Tahlequah's new bookstore featured a talk and signing for Saturday to focus on historical contributions of women, to activist movements that created progress in the American West.

"This Land is Herland: Gendered Activism in Oklahoma from the 1870s to the 2010s" is a book edited by Sarah Eppler Janda and Patricia Loughlin. They were on hand at Too Fond of Books to discuss the subject matter.

Janda and Loughlin combined the stories of women like LaDonna Harris, Rachel Caroline Eaton, and California M. Taylor to create a compilation of accounts pointing to the influence these women had on the establishment and advancement of Oklahoma. The authors explore how these activists shaped their communities.

"[We] are both historians and we enjoy teaching and writing about Oklahoma history, Native American history, and women’s, gender and sexuality studies." said Loughlin. "The contributed volume... features 13 women scholars presenting 13 profiles of women activists in Oklahoma, from Kate Barnard to Clara Luper to LaDonna Harris."

The book is the first in the series, "Women and the American West," with series editor Renee Laegreid, at the University of Oklahoma Press." Scholars who contributed came from a wide variety of backgrounds, and each focused on a particular individual with historical influence.

King, contributor of the story of Rachel Caroline Eaton, discussed the content and implications of the book on both the past and the present.

"The two editors are two real juggernauts of Oklahoma history, or anything related to this region, and are both deeply involved in women's history," said King. "They are the ones who reached out to different scholars who could contribute biographical approaches to a woman activist in Oklahoma. They contacted over a dozen different scholars, and they invited us to contribute a chapter, set deadlines, and got the whole book together. We even had a workshop to prepare it. It just came out last July."

Janda and Loughlin were grateful to the authors who worked with them to make this project a reality.

"In 2020, the Oklahoma Historical Society, the Cherokee Strip Regional Heritage Center, and Oklahoma Humanities sponsored a virtual program series featuring many of the book’s authors and their work," said Loughlin. "These programs are available on the OHS website. The series and book events provide contributors with the opportunity to continue the conversation, making connections between the women featured in the book. Farina King’s chapter, for example, shares with us the story of Rachel Caroline Eaton as a graduate of the Cherokee National Female Seminary and her commitment to Cherokee Nation."

The two editors are passionate about their project and what the book represents. King's historical figure, Callie Eaton, also had local significance, as one of the graduates of the women's seminary that is now the heart of Northeastern State University.

"They have been great about getting the word out despite COVID. They have a lineup of different events," said King. "This project has inspired me to focus on women being game-changers, trail-blazers. I clearly thought of the seminary, what was their life like? What were their experiences? Two hundred women graduated but several thousand attended," said King. "Eaton went on to get a Ph.D. in history and was one of the first Native women to get a doctoral degree, and attended a prestigious university, the University of Chicago. "

The central message of the book is that women’s lives, experiences, and contributions have shaped Oklahoma history, said Loughlin.

Valerie Reese, an owner of Too Fond of Books, wants to continue to host events like this and to foster relationships between the NSU community and the locals.

"We were glad to have them here," said Reese. "It is a chance for me to hear more about influential Oklahoma women. We feel like it is a chance to create a rich literary culture here in the community that can help everyone. I am also hoping to get more interaction between town folks and college folks."