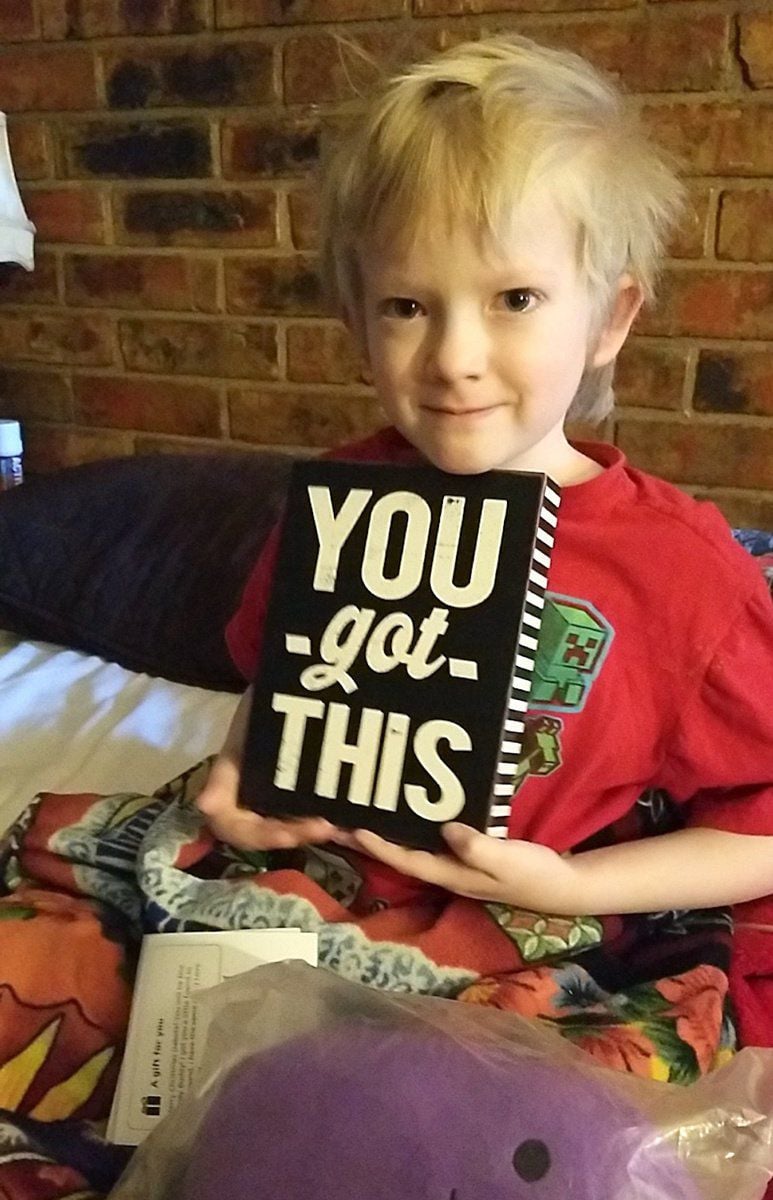 Dakota Roe, 9, needs a live kidney donation due to having been born with cystinosis, a rare metabolic disease. He recently got a care package featuring a "you got this" sign and a plush kidney toy from his mom's friend, who also had to have a kidney transplant at a young age. 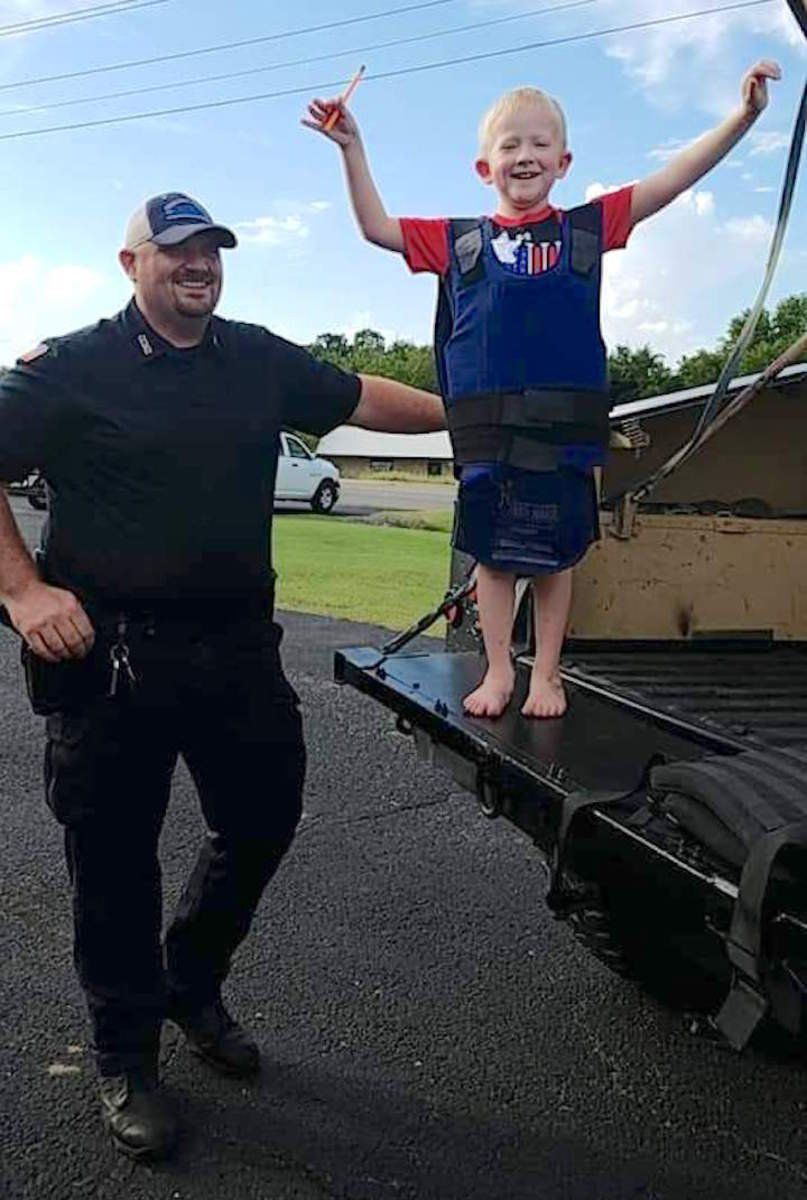 Cherokee County Sheriff's Office Deputy Ryan Robison laughs as 9-year-old Dakota Roe tries on a vest. Dakota would like to grow up to be a police chief, but is currently needing a live kidney transplant due to having a very rare metabolic disease, cystinosis.

Dakota Roe, 9, needs a live kidney donation due to having been born with cystinosis, a rare metabolic disease. He recently got a care package featuring a "you got this" sign and a plush kidney toy from his mom's friend, who also had to have a kidney transplant at a young age.

Cherokee County Sheriff's Office Deputy Ryan Robison laughs as 9-year-old Dakota Roe tries on a vest. Dakota would like to grow up to be a police chief, but is currently needing a live kidney transplant due to having a very rare metabolic disease, cystinosis.

A Park Hill family is hoping someone with Type O blood will come forward to help 9-year-old Dakota Roe in his need for a live kidney donation.

Dakota was born with a very rare metabolic disease, cystinosis. Only 500 people in the U.S., and 2,000 worldwide, have the disease. Dakota is the second person diagnosed in Oklahoma.

"It affects all organs in his body. The first one is his kidney. It's caused kidney failure since he was about 3 years old," said Cara Amos, Dakota's mom. "With special medication, it's been able to slow it down a little bit, but he's at the point where he needs a new one."

According to cystinosisresearch.org, cystinosis is a metabolic disease in which the amino acid cystine gets into the cells, but has no way out. This defect causes the cell to crystallize, which causes early cell death. Cystinosis slowly destroys the organs in the body, including the kidneys, liver, eyes, muscles, and the brain.

"We've been trying to get the word out since last summer because we knew it was coming," said Amos. "If we don't find a donor, the kidney could die out. It's so big and he's so small, it could be damaging."

Dakota had a gastrostomy tube and a dialysis port put in last year. He was a 7 on the organ donation waiting list until last Friday, when he was moved to a 1, which means the medical urgency has increased.

On Wednesday, Amos got word from Dakota's kidney doctor that her son is "right on the edge of needing to start dialysis."

"We do labs again in March and those determine if he is going to start dialysis," she said.

"He has not done dialysis before. Dialysis will be horrible for him because of how little he is. They said his best bet would be going to the hospital to do it, so we would have to go on Mondays, Wednesdays and Thursdays to Oklahoma City."

Amos did have to quit working to stay home and take care of Dakota, as well as be able to make his appointments.

Dakota has three or more specialists in Oklahoma City, and growth hormone treatments in Tulsa.

He's the shortest in his class, and Dakota's dad said he looks more like he's a 5- or 6-year-old.

"He's skinny, but with a big ol' belly," said Joseph Roe. "What he goes through on a daily basis - with all the medications - you can't tell. He treats everyone great. He can make a whole room smile. You couldn't ask for a better kid."

Dakota had to be taken out of Keys Elementary School because he kept getting ill. To pass time during the day, Dakota's mom said, he likes to do his homework, watch YouTube videos, and to play with his baby brother.

"He's still a Keys Cougar at heart," said Amos. "He's exhausted most of the time - more so than not. He does have some pain. He's been getting kidney stones a lot lately."

When asked if he wanted to talk to the Daily Press, Dakota just wanted to say "hi" to his favorite deputy, Jerrod Rye.

"For his birthday last year, the only thing he wanted was to be baptized. He had invited some of the officers at the [Cherokee County] Sheriff's Department to watch him get baptized," said Amos. "His dream is to be chief of police when he grows up."

Those who have the right blood type and are serious about being a donor can call Lesli Summerhill, a living donor coordinator with the Oklahoma Transplant Center at the University of Oklahoma Medical Center, at 405-271-7498.

"They contact Lesli, and do a 30-minute phone interview. They would document their blood pressure for a week. After that, they would go in for testing," said Amos.

The donor would not have to pay for anything.

"It's completely paid for by our insurance and the transplant team," said Amos. "When we do find a donor, Dakota has to go through a lot. They have to make his immune system almost nothing, so when he does get a kidney, his body doesn't reject it."

The donor would be out of commission for about two weeks, with no heavy lifting for six weeks, according to Amos.

Dakota will have to stay in Oklahoma City for at least three months after the transplant, with one of those months in the hospital.