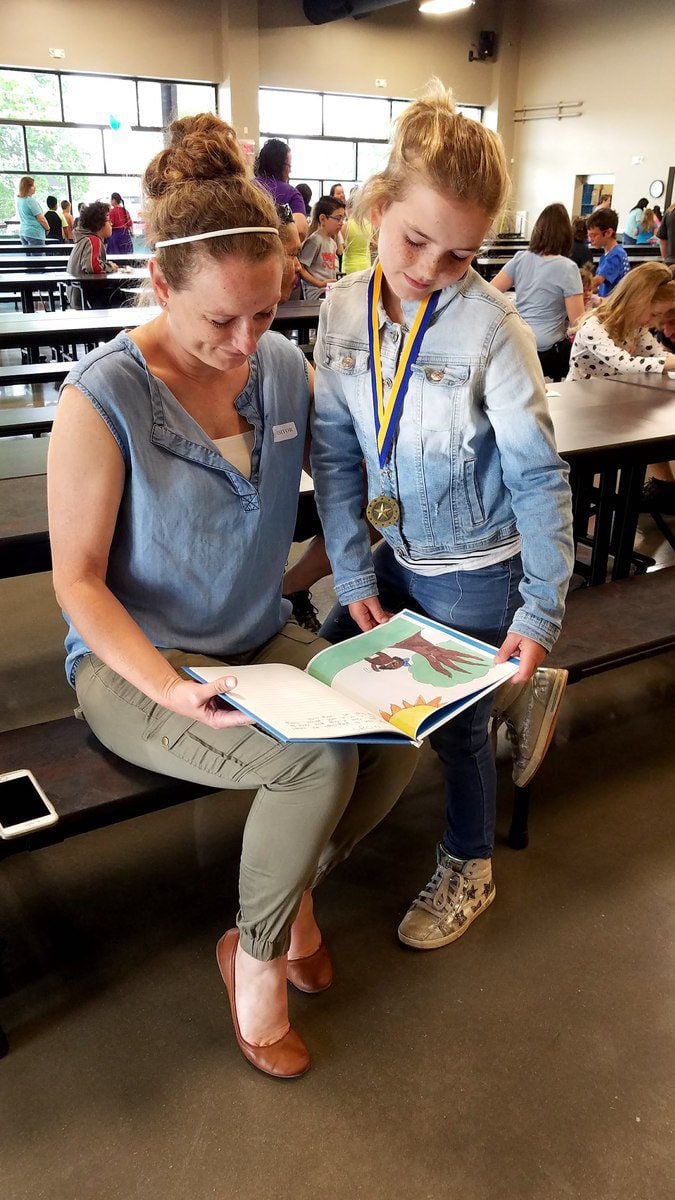 During the Bookies & Milk event at Cherokee Elementary School Thursday, Lana, left, and Zoe Myers read "Animals" which was written and illustrated by Zoe, a second-grader. 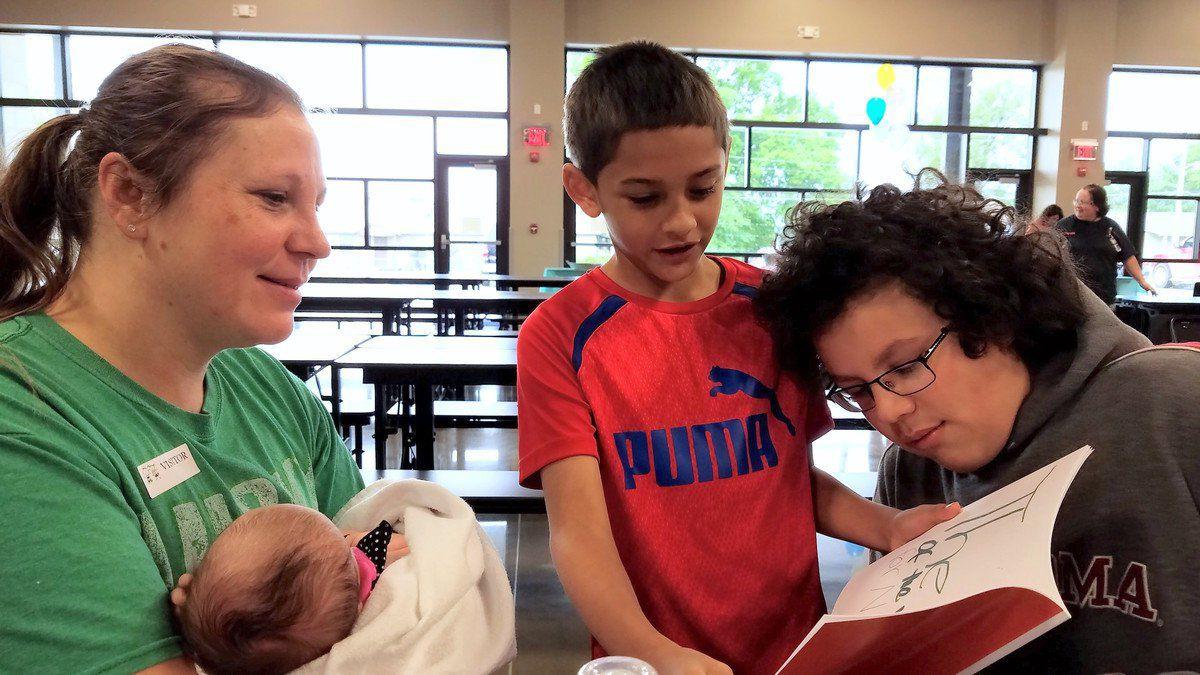 Second-grader Jaxson Rodriguez, center, shows off the book he wrote and illustrated to his aunt, Rachel Renfro, left, holding Everley May, and cousin, Wyatt Renfro, right. They were at the Bookies & Milk event in the new Cherokee Elementary School cafetorium.

During the Bookies & Milk event at Cherokee Elementary School Thursday, Lana, left, and Zoe Myers read "Animals" which was written and illustrated by Zoe, a second-grader.

Second-grader Jaxson Rodriguez, center, shows off the book he wrote and illustrated to his aunt, Rachel Renfro, left, holding Everley May, and cousin, Wyatt Renfro, right. They were at the Bookies & Milk event in the new Cherokee Elementary School cafetorium.

"Bookies & Milk" kicked off Thursday morning for Cherokee Elementary School second-graders, with books created by students debuted and celebrated after months of learning and creating.

"It took a village to get this project completed. The librarian read them all and printed awards," said Jessica Morrison, second-grade teacher. "Most [students] are 7 and 8 years old, and it was really fun. If they can do this at 7 and 8, I can't wait until they are older."

Morrison has been at Cherokee Elementary for a couple of years, but she did the Studentreasures Publishing book projects at her previous school. Every child got a free copy of his or her book, and parents can order additional paperback or hardback copies. Morrison said last year was the first year for paperbacks.

While the project is available for all ages, Morrison said second grade seems to work out the best, as older classes concentrate on standardized testing.

The first-graders make a class book by choosing a theme for their tome, and each student writes and draws a page. The pages are then published in one book.

"I would have loved to make my own book," said sixth-grader Wyatt Renfro, who was attending Bookies & Milk to see his cousin Jaxson Rodriguez.

Jaxson had four chapters in his version of a Captain Underpants story. In his "About the Author" section, Jaxson said he wants to write books when he grows up. He said it took him at least two weeks to complete the book.

Morrison said the students actually work for months on their books.

"We talk about the writing process and genres of books. It covers a huge spectrum of skills," said Morrison. "It's so labor-intensive."

The students got to choose if they wanted to do a fiction or non-fiction book, as well as the genre of book.

Those who chose to do non-fiction had to do research on their subject. Morrison said some students creating non-fiction books wanted to use photographs instead of drawing pictures, so she had to teach them about copyrights.

Julie Crittenden, librarian, said she had not heard of the book project until she started at Cherokee Elementary two years ago.

"It's an amazing program. It's definitely a worthwhile project for any student, especially younger ones," she said.

"It's time-consuming, but they're so patient. They put an enormous amount of time into it with rewriting, and editing, and revising," she said.

One student from each of the three second-grade classes received the Cherokee Caldecott medal, and five in each class had their creations chosen as Honor Books.

The real Caldecott Medal is awarded annually to the artist of "the most distinguished American picture book for children," according to the American Library Association.

Zoe Myers was the Cherokee Caldecott winner from Lori Robertson's class. Her book was "Animals," and she also received a Most Realistic Illustrations award.

"I like the drawings. It took me several weeks," said Zoe.

Her mom, Lana Myers, was moved that Zoe had dedicated her book to mom and dad.

"It's great to see all of the interesting ideas kids come up with for their books. I'm grateful for the teachers for this opportunity," said Myers.

Each book had an award sticker on it, such as Best Chapter Book or Best Giraffe in a Book. These were made up by Crittenden after she read each book.

"The kids like the awards. It's one of the hardest things I do," said Crittenden. "They all did an amazing job. I'm so proud of them. They put their hearts and souls into it. The level of writing just improved across the board from last year."

She bases the Honor Awards on several factors, such as the story's having a plot line, the technical aspects of writing, complete sentences and more.

"It increases overall love of books and writing," said Crittenden. "Not many kids can say they have a published book at 7 or 8."