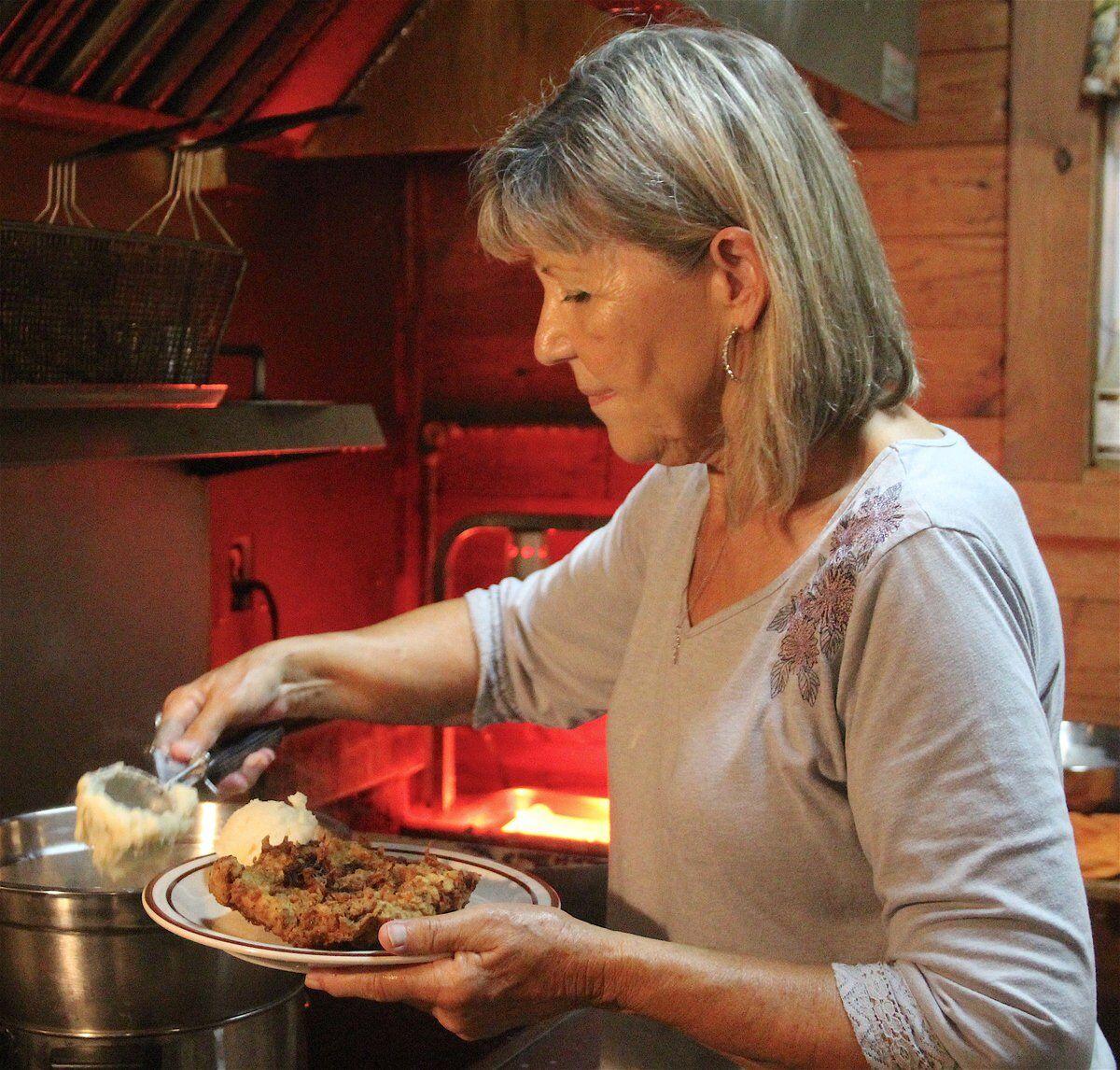 Deborah Rucker adds a serving of mashed potatoes to a plate of chicken-fried steak at Jincy's Kitchen in Qualls, OK. 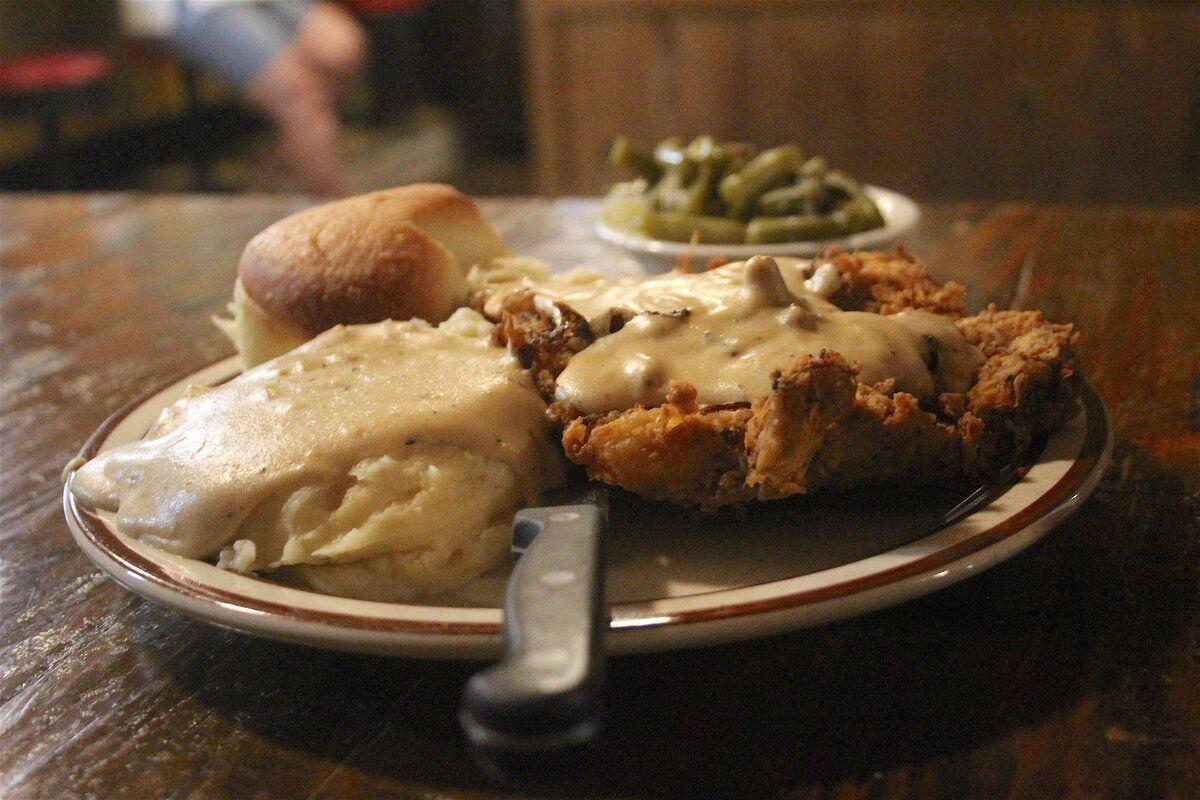 The chicken fried steak at Jincy's Kitchen comes with a choice of two sides and a roll.

Deborah Rucker adds a serving of mashed potatoes to a plate of chicken-fried steak at Jincy's Kitchen in Qualls, OK.

The chicken fried steak at Jincy's Kitchen comes with a choice of two sides and a roll.

Sometimes people just need a little comfort food to get them through the day – and chicken-fried steak falls under that category.

A longtime franchise, famous for its chicken-fried steak, remains a favorite among locals. Del Rancho’s founder, J.R. Holt, wanted something unique for his menu. Thus, the steak sandwich was born in the early 1960s. This year, it was voted the top slot in the Daily Press’s Cherokee County Readers’ Choice Awards for chicken-fried steak.

Steve Fennell, owner of Tahlequah’s Del Rancho location, said the restaurant’s consistency has kept customers coming back to the "Home of the Original Steak Sandwich Supreme."

Whether it’s for breakfast, lunch or dinner, anytime is a good time for Del Rancho’s chicken-fried steak. Hungry customers can order the chicken-fried steak supreme – a top steer beef dredged in Del Rancho’s breading and fried the “old-fashioned way.” It comes with a choice of french fries, mashed or baked potatoes, salad, and Texas toast. Or, diners can get their steak on a bun with mayonnaise, lettuce and tomato. It’s the kind of sandwich friends tell each other about.

“People can count on it,” said Fennell. “We’ve had great word-of-mouth advertising for years and years. People are coming back for the same good sandwich and the same good dinner, so that’s what I would attribute our success to.”

For nearly 20 years, Jincy’s Kitchen in Qualls has served as a home away from home for the community there, while also attracting guests from all around the country. Owner Deborah Rucker said Jincy’s has had customers from every state, except for Hawaii. Many of them have sat down to enjoy the eatery’s chicken-fried steak, which she like to keep “plain and simple.”

“We don’t do anything difficult down here, but nothing has ever been frozen,” she said. “I buy the roast and I have my own tenderizer, and it’s the top of the meat. It costs a little bit more to have to do it all yourself, but you know what you’re getting. I’m not buying something that’s pre-made or frozen; it’s just fresh meat and good meat. I think that’s the key to it.”

Jincy’s took second place in the Readers’ Choice Awards for chicken-fried steak, but Rucker likes to take it a step further in the kitchen. The restaurant also serves up chicken-fried chicken and chicken-fried pork.

“We’re rural America,” said Rucker. “If we can catch it, we’re going to eat it.”

Jincy’s success could be attributed to its combination of home-style food and atmosphere. The kind of place where tea is served in a Mason jar, the restaurant tells a story of different times. Along the walls are countless antiques, including old bottles, figurines, a type writer, political posters, and more. The building was actually used as a set for the old general store in the movie “Where the Red Fern Grows.”

“We’re famous, but nobody knows it,” said Rucker.

Jincy’s Kitchen is open on Fridays, 5 to 9 p.m.; Saturdays, 8 a.m. to 9 p.m.; and Sundays, 8 a.m. to 2 p.m. Those who take the time to visit will likely lose cell phone service, but one thing the restaurant does not lack is conversation.

“This place is more than me or our food; it’s community and history,” said Rucker. “The one thing we do want people to feel like is that this is a comfortable, safe place to come. We always like to come out and visit and get to know people. This is just home away from home.”

Charlie’s Chicken, another longstanding franchise popular among locals, took third place in the Readers’ Choice Awards. Although known for its fried chicken, customers can also go with the country-fried steak dinner, which comes with a choice of two sides and a roll. Charlie’s Chicken’s marketing representative did not return messages by press time.