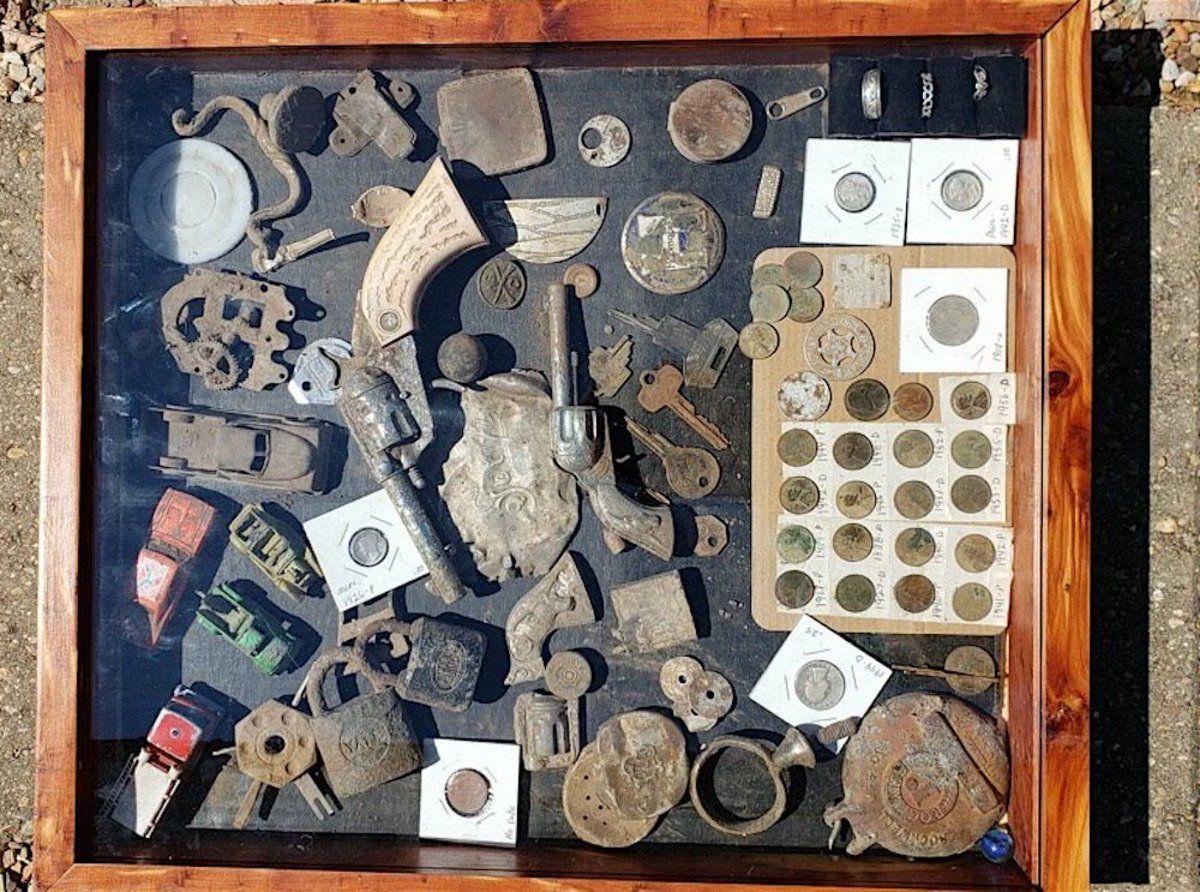 Members of the Three Forks Treasure Hunters Club bring their finds for the month to each meeting. Jimmy Davis put his finds in a display case. 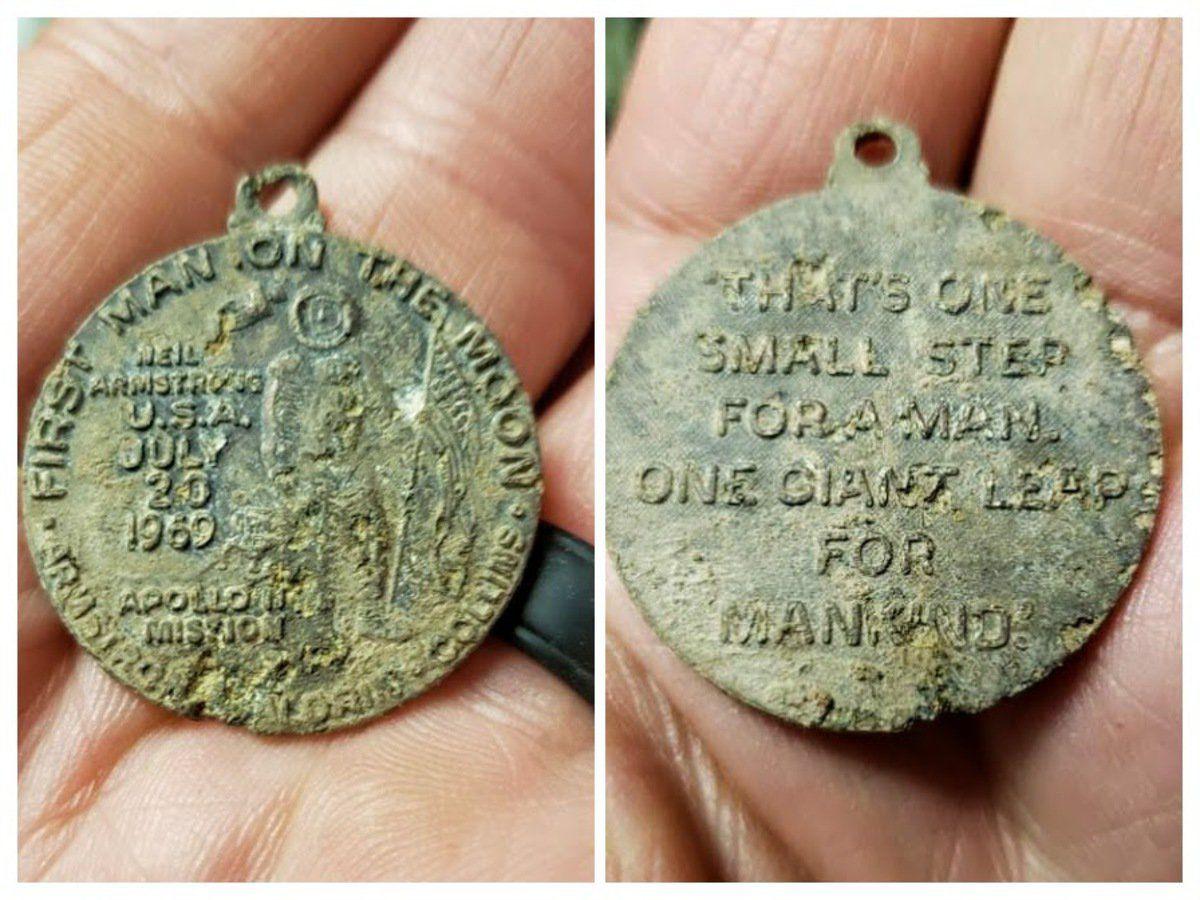 A medallion commemorating the first moon landing was found by Jimmy Davis near Northeastern State University. 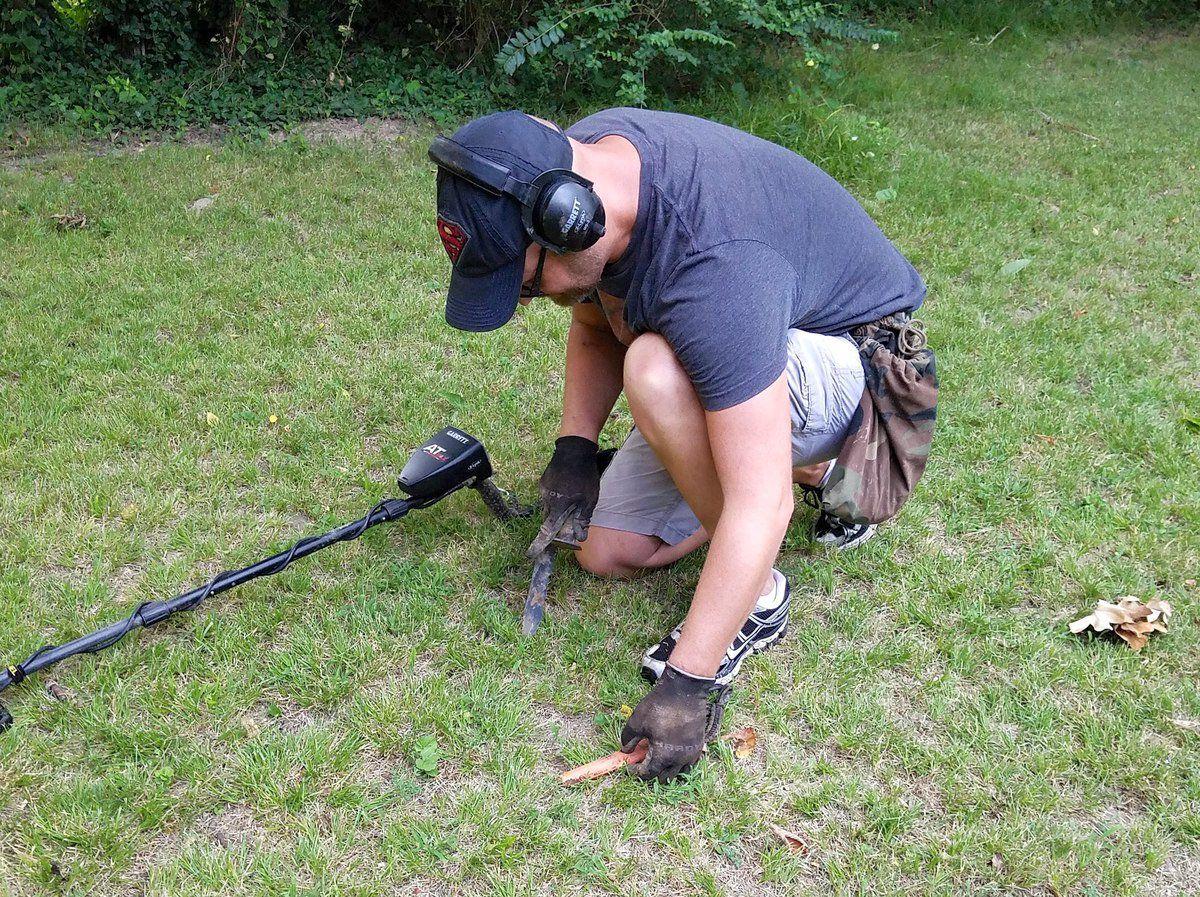 Jimmy Davis, a respiratory therapist at the Muskogee VA hospital, cuts a plug in the ground where he has detected metal. 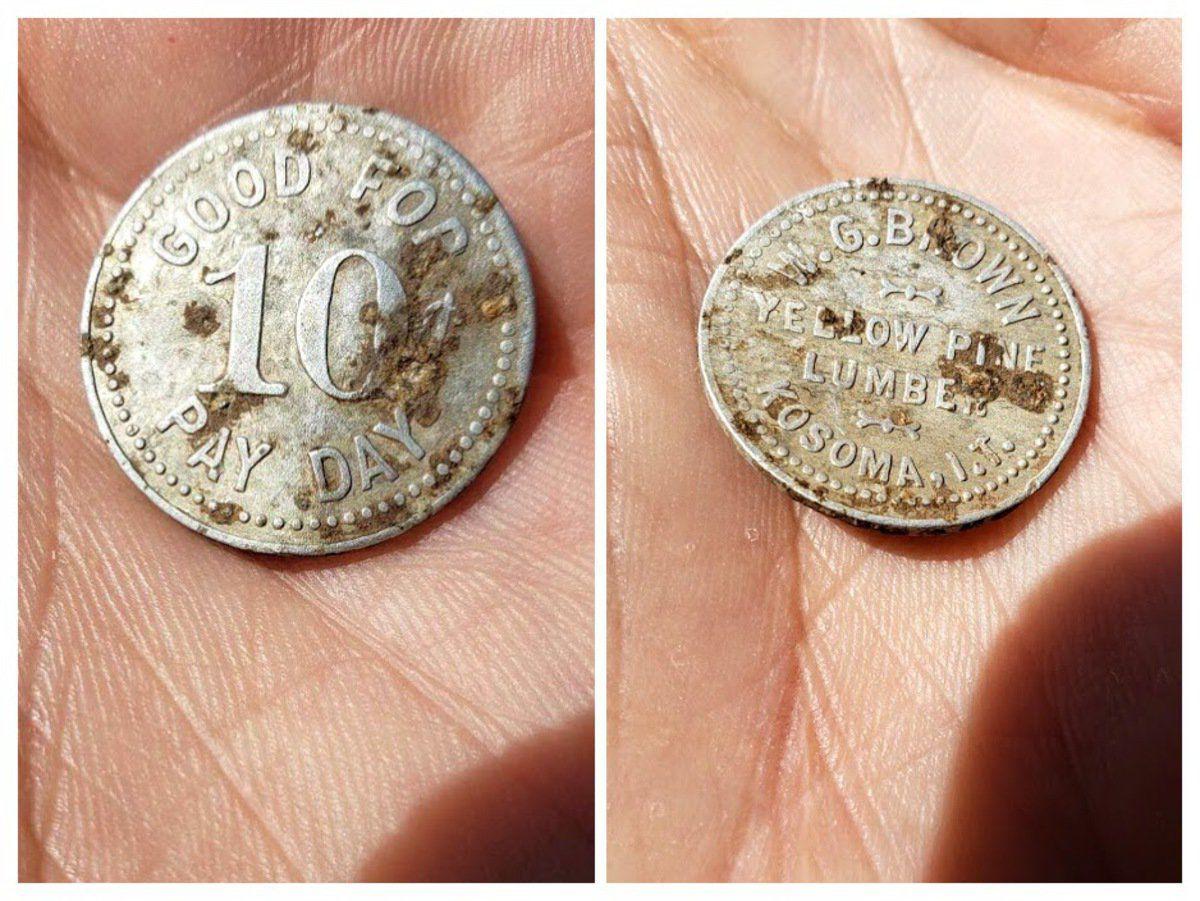 An Indian Territory token was one exciting find for treasure hunter Jimmy Davis. 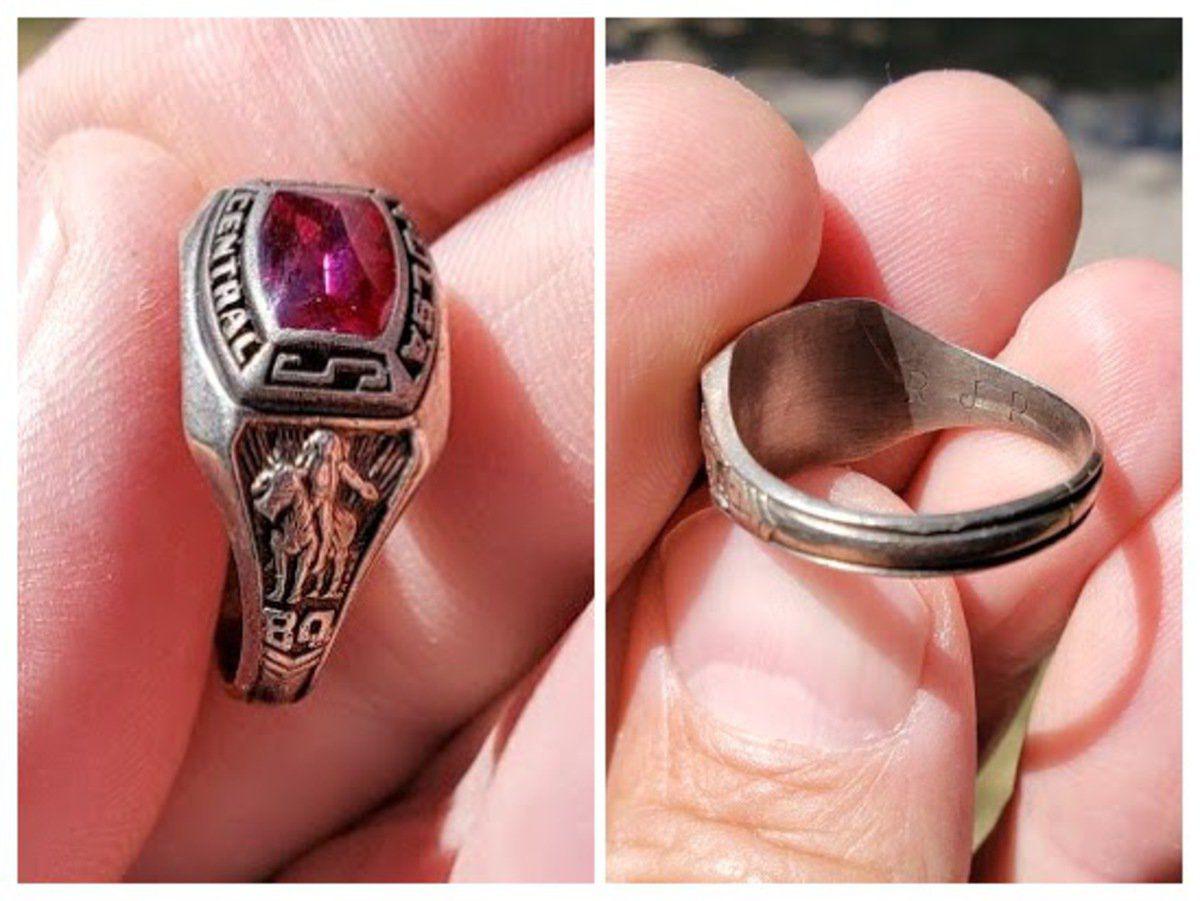 One of Jimmy Davis' finds in Tahlequah is a 1984 Tulsa Central class ring. He hopes to return it to the owner. 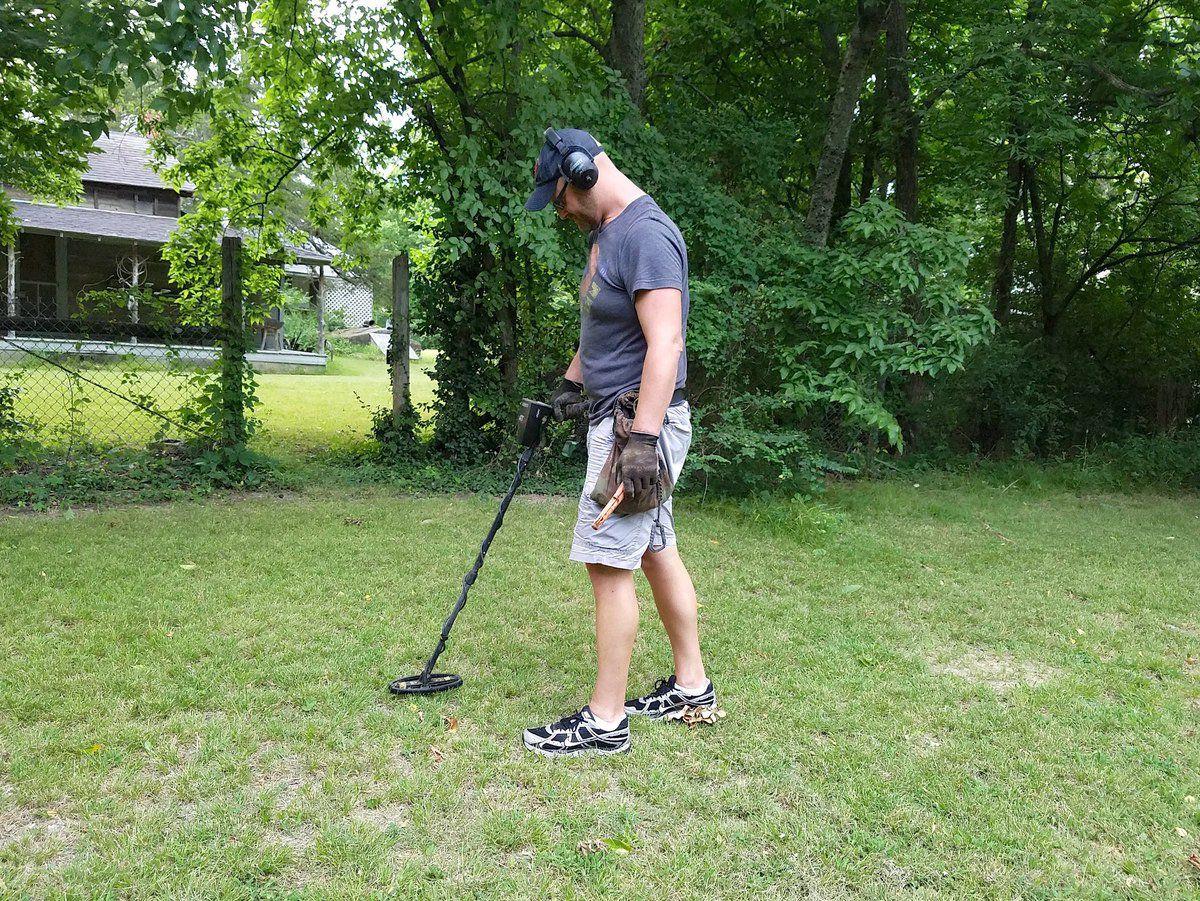 Jimmy Davis uses a metal detector on land near Leoser Cabin. The Cherokee County resident has been interested in the hobby since the 1980s.

Members of the Three Forks Treasure Hunters Club bring their finds for the month to each meeting. Jimmy Davis put his finds in a display case.

A medallion commemorating the first moon landing was found by Jimmy Davis near Northeastern State University.

Jimmy Davis, a respiratory therapist at the Muskogee VA hospital, cuts a plug in the ground where he has detected metal.

An Indian Territory token was one exciting find for treasure hunter Jimmy Davis.

One of Jimmy Davis' finds in Tahlequah is a 1984 Tulsa Central class ring. He hopes to return it to the owner.

Jimmy Davis uses a metal detector on land near Leoser Cabin. The Cherokee County resident has been interested in the hobby since the 1980s.

Even before the first patent was granted for a metal detector in 1925, people searched for ways to locate metal and ore. While some used the devices to benefit the mining industry or military operations, the handheld devices have led to a hobby for treasure hunters.

Cherokee County resident Jimmy Davis is a member of the Three Forks Club, which meets the first Friday of the month in Wagoner.

"They're a bunch of good-hearted people. They get together and show relics and the junk we find," he said. "It's amazing how big the metal-detecting community is. It's about hanging out with people who are like-minded."

He said the group and activities are family oriented, so kids can get involved. He and his wife have a 3-year-old and a 9-year-old.

This spring, club members participated in a large hunting event in Sapulpa, and families camped out. One hunt was specifically for youth.

"It had a big turnout," said Davis. "It's all seeded. They put out items and let grass grow up. No one has to dig."

While Davis has been seriously detecting for only about a year and a half, his grandpa got him started in the 1980s.

"He had an old Garrett that used to beep on anything. It always sparked my imagination," he said. "It's always been a fun thing I've wanted to try and do."

Davis' wife picked up a used Garrett AT Pro for a good price, and that's when he began seriously treasure hunting. He said the difference between that detector and the one his grandpa had is night and day. The newer one can discriminate among various types of metals and has different tones.

Davis owns seven metal detectors, including his grandpa's. He uses three regularly and one is his son's.

"It's not a super-expensive hobby. You can get a nice used detector for $200-300. A lot of metal detector companies have packages, like starter kits," said Davis.

Besides the metal detector, Davis also uses a wireless headset, a digging tool, a pouch for finds, and a hand-held pinpointer. Although the pinpointers can be expensive, they help narrow down where a target is. This may mean less digging.

While a headset is optional, the sounds of the detector can annoy some bystanders.

"The noise can be irritating to dogs," he said. "They also drown out background noises, and you can hear your tones better. If your machine is capable of going in water, you want waterproof headphones."

When first using a detector, Davis recommends reading the manual and then testing it on different types and sizes of materials.

"The more time you spend with the machine, the more you learn the different sounds," he said. "Basically, get out and play with it and learn it. I dug a lot of junk to learn my machine."

"There are guys out there who can give you all kinds of information about a little piece of rusty history," he said. "Some clubs want you to do your own research, but if you get stuck, you can post finds and ask information."

His first find that got him excited was a World War I Army Great Seal uniform button.

The find that got Davis addicted was an Indian Territory token he found in Ross City Park. It bears the words "Good for 10¢ pay day" on one side, and "Yellow Pine Lumber, W.G. Brown, Kosoma, I.T." on the other.

"I thought it was a game token and threw it in my bag with trash," said Davis. "I took it to the club, and older guys had books on Indian Territory tokens."

He also posted the token online and other hunters sent him more information, including an appraisal.

Some hunters fall under the "coin shooter" label, meaning they try to find older or silver coins. Davis said pennies older than 1982 are pure copper, and quarters and dimes from before 1964 are silver. The newer coins are "clad," meaning they are mixed metals pressed together. Clad and junk make up 60-70 percent of what Davis finds.

"I love the old relics that can tell a story. Anyone can lose a coin. Coins are still in circulation and you can't make it personal," he said.

One find has led Davis on the search for its owner: a 1984 Tulsa Central class ring he found in a Tahlequah park.

"It was about 4 inches down in the ground. It had been there a while," he said.

When a target is found, Davis cautions hunters to be respectful of the property and not dig a lot.

"At meetings, they tell you to cut a plug; don't dig a hole. I try to treat everyone's property like it was my own," he said. "Cover holes up and don't make a mess."

He said it is a courtesy to pick up trash while hunting. In fact, hauling off trash he has found has helped Davis pay for his hobby. He keeps buckets filled with mainly brass, iron, and copper and will cash that in occasionally.

"That's something our club pushes: Clean it up. It builds trust in the community," he said.

Davis will knock on doors and ask occupants if he can search their yards. Recently, he was in the Goingsnake Street area and talked with Patsi Smith, who owns the land Leoser Cabin is on. While Smith hasn't allowed him near the cabin yet, he has hunted on the area used for horses. The cabin used to be occupied by Dr. Irvin D. Leoser, and it is said he treated people from both sides of the Civil War. One item Davis found on that site was a piece of a lantern that bore a patent date of 1860.

Around that same neighborhood, he has found a Civil War-era bullet and a medallion commemorating the first moon landing.

In Shady Grove, he has hunted around a plot of land that used to have two homesites on it, as well as a portion used as a trash pit during the 1920s and '30s. He has researched this property and others online to get the topography of the land. He will find old maps online and overlay them on newer maps.

"I'm pretty sure it was the site my wife's grandmother lived on when she was growing up. It made it that much more exciting and interesting," said Davis.

Some sites Davis will search more than once. He said different factors - such as temperature, moisture, and minerals - can lead to finding items that were missed at a previous time.

One such site is near Fort Gibson Lake. Repeatedly he finds handfuls of military buttons. Curiosity lead him to look up the land, and he discovered the history of the Yonkers and Ear Bob areas.