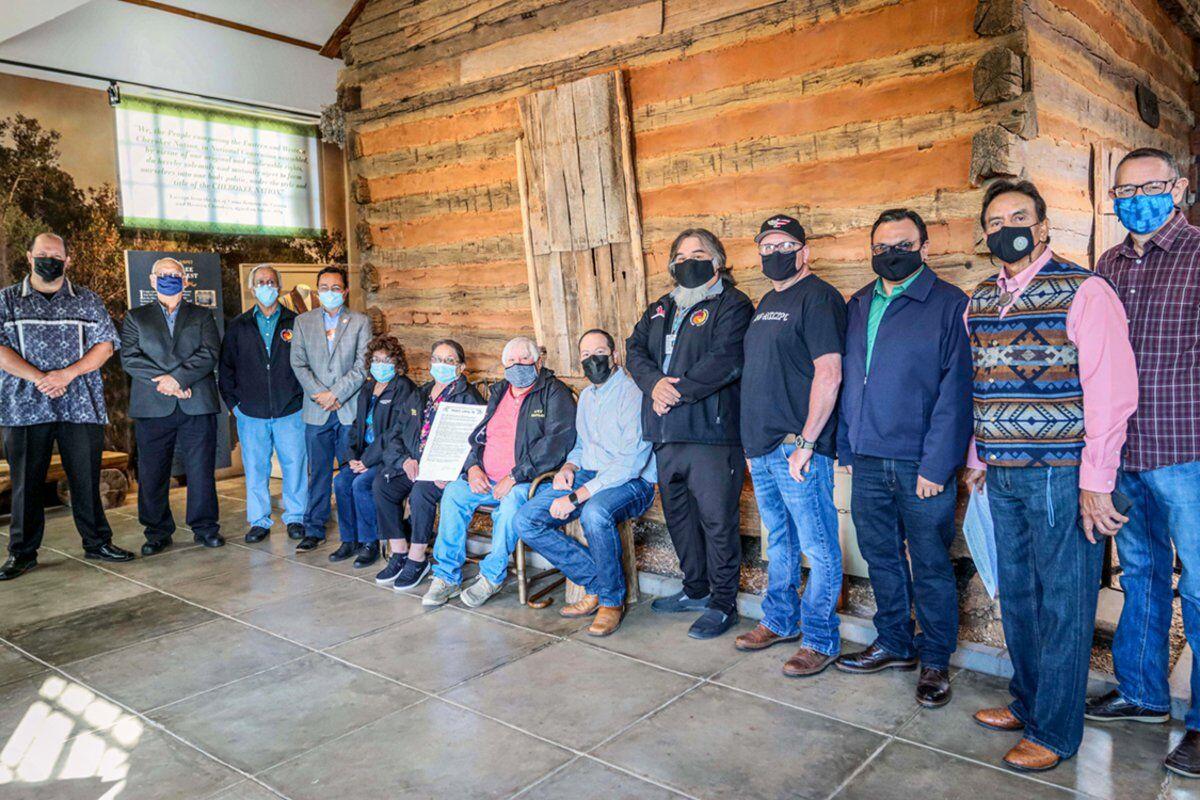 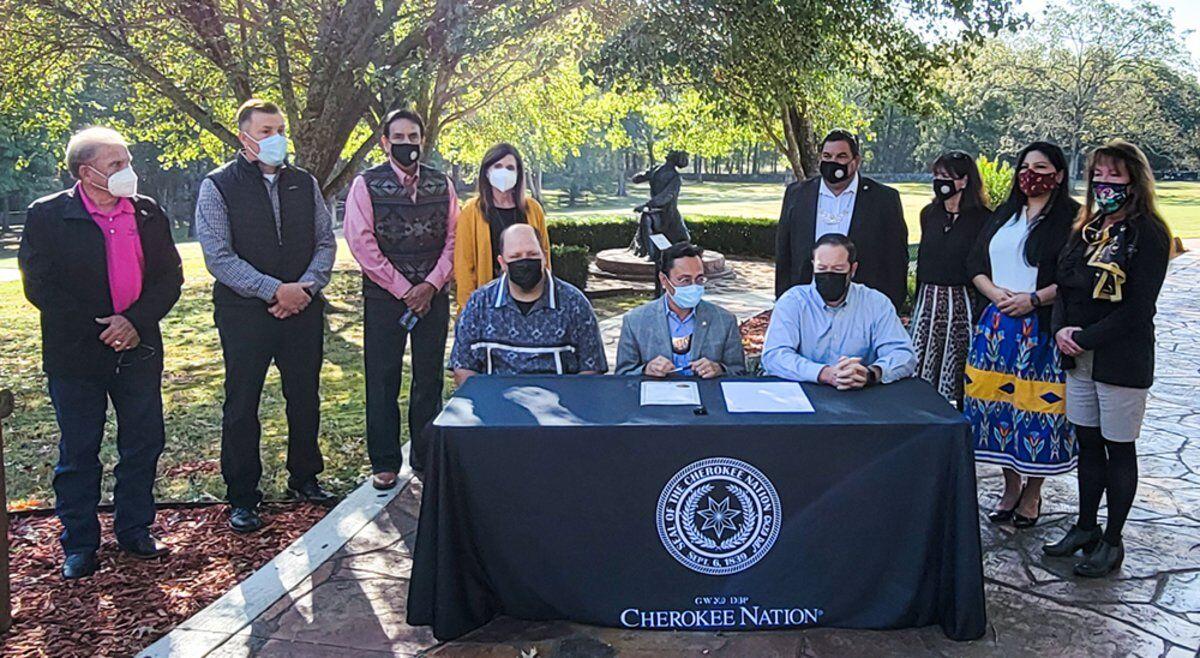 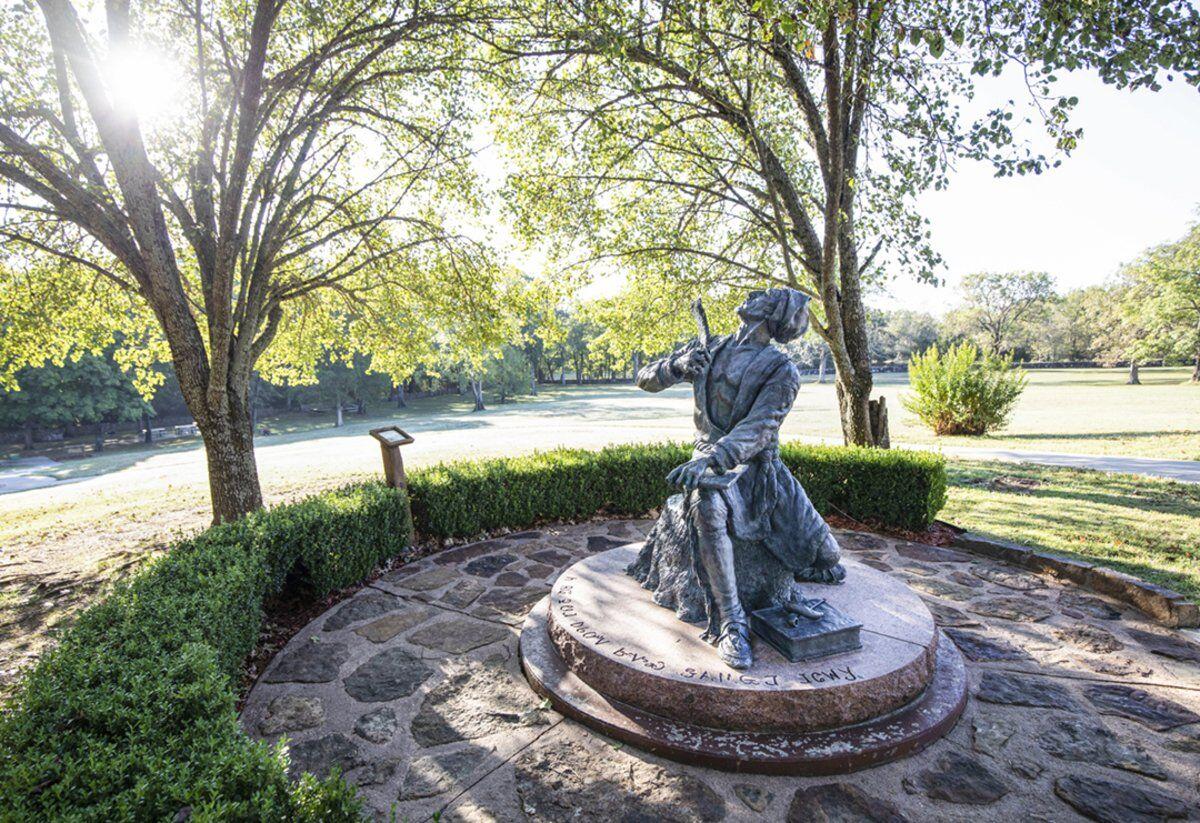 Sequoyah statue on the grounds of Sequoyah's Cabin Museum in Sequoyah County.

Sequoyah statue on the grounds of Sequoyah's Cabin Museum in Sequoyah County.

Principal Chief Chuck Hoskin Jr. signed an official proclamation declaring Oct. 15 as "Sequoyah Day" during a small gathering Oct. 12 at the Sequoyah's Cabin Museum in Sequoyah County with members of his cabinet, the Council of the Cherokee Nation, and the Cherokee Nation Language Department's team of Cherokee translators.

The Language Department translated the proclamation into Cherokee syllabary and worked with John Brown University in Siloam Springs, Arkansas, to produce the Cherokee proclamation on a printing press using a special commissioned syllabary typeset.

"Sequoyah's creation of the Cherokee syllabary 200 years ago is one of the driving forces which helped the Cherokee Nation thrive. He gave our people the greatest sword and shield we ever wielded: the ability to communicate with each other and the wider world," Hoskin said. "Sequoyah's revolution of thought and literacy sustained us during a period in which we might have met our demise. Now our challenge is to continue the preservation and perpetuation of the language both spoken and written and to make sure future generations can do what our ancestors over the last 200 years have done, which is to further their education and strengthen our great tribal nation."

Sequoyah completed the syllabary in 1821 and the Cherokee Nation adopted it as its official written system on Oct. 15, 1825. Today, the Cherokee syllabary consists of 86 characters.

"When Sequoyah came up with the written language, his creation allowed a Cherokee to show a piece of his heart to another Cherokee miles and miles away," said Howard Paden, executive director of the Cherokee Nation Language Department. "Today we have our elders and translators helping to translate pieces of written Cherokee syllabary on documents as old as 150 years. Some of the words haven't been spoken in decades. Through this work, we are preserving the Cherokee language in such an intricate way. The process is still allowing a Cherokee to share a piece of his heart through that piece of paper, only instead of being miles away, it's decades or hundreds of years later. We couldn't have done that without Sequoyah. We couldn't have done that without the work and efforts of Chief Hoskin, his administration and the Council as well."

"I've had a lifelong fascination with the Cherokee syllabary. I grew up in a home with Cherokee speakers," Boney said. "I grew up with it, always seeing it. When I went to college I studied graphic design because I was interested in writing and typography. For me to be able to work on this project and have worked with actual moveable type and see how it went from that to the digital era gave me a much greater appreciation for it all."

The tribe broke ground in 2020 on the Durbin Feeling Language Center, a 50,000-square-foot, state-of-the-art facility that will be housed in the former Cherokee Casino Tahlequah. The center will become the long-term home of the Cherokee Language Department, which comprises more than a dozen unique programs for Cherokee language perpetuation. For the first time in history, all of the tribe's language programs will be under one roof when construction is complete. The campus will also soon include homes for Cherokee speakers.

Hoskin and Deputy Chief Warner made language preservation and perpetuation a priority because only about 2,000 first-language Cherokee speakers are alive today. In July, Hoskin and Warner signed an agreement with the Eastern Band of Cherokee Indians in North Carolina to protect and preserve the language, history and culture by working together with Western Carolina University, which is on EBCI land and offers a Cherokee studies minor and Cherokee language courses.