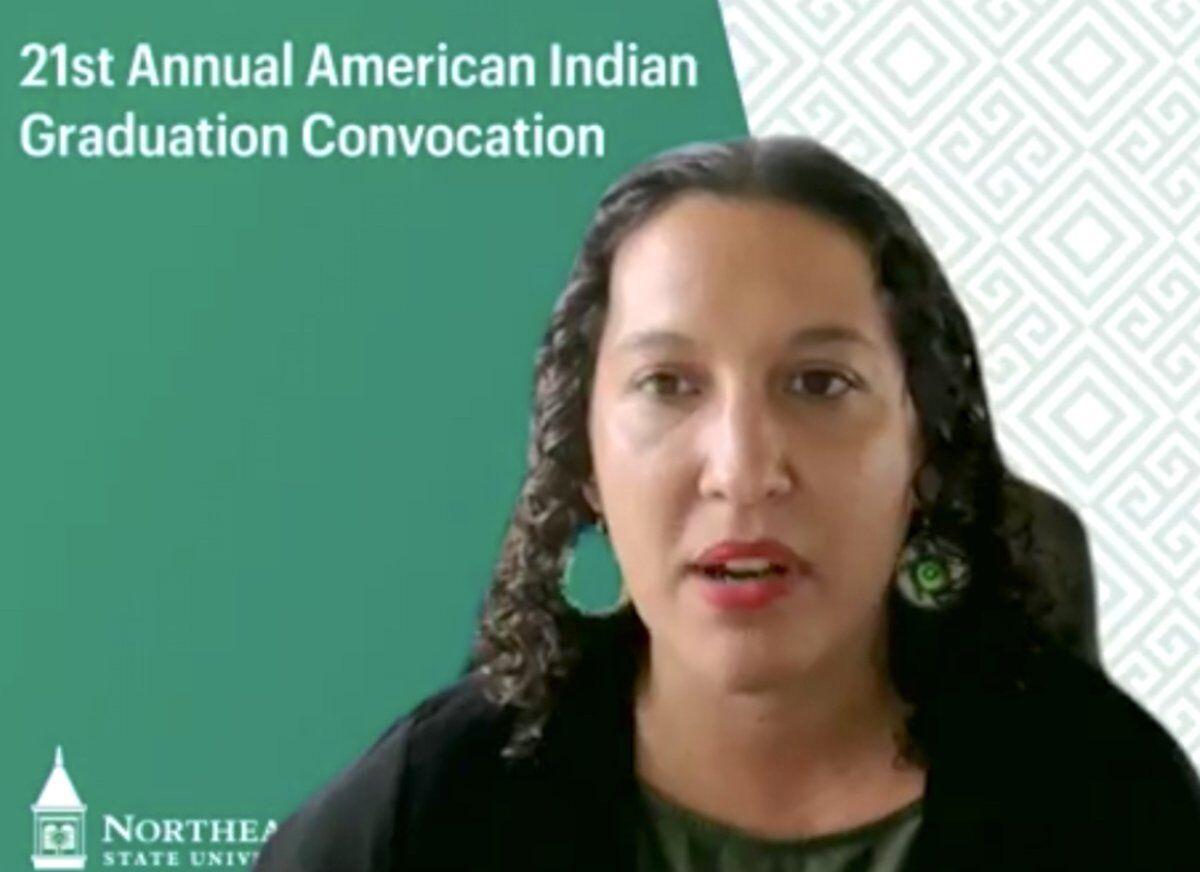 Sara Barnett-Nsakashalo explains how NSU has conferred more bachelor's degrees to Native American students than any other university. 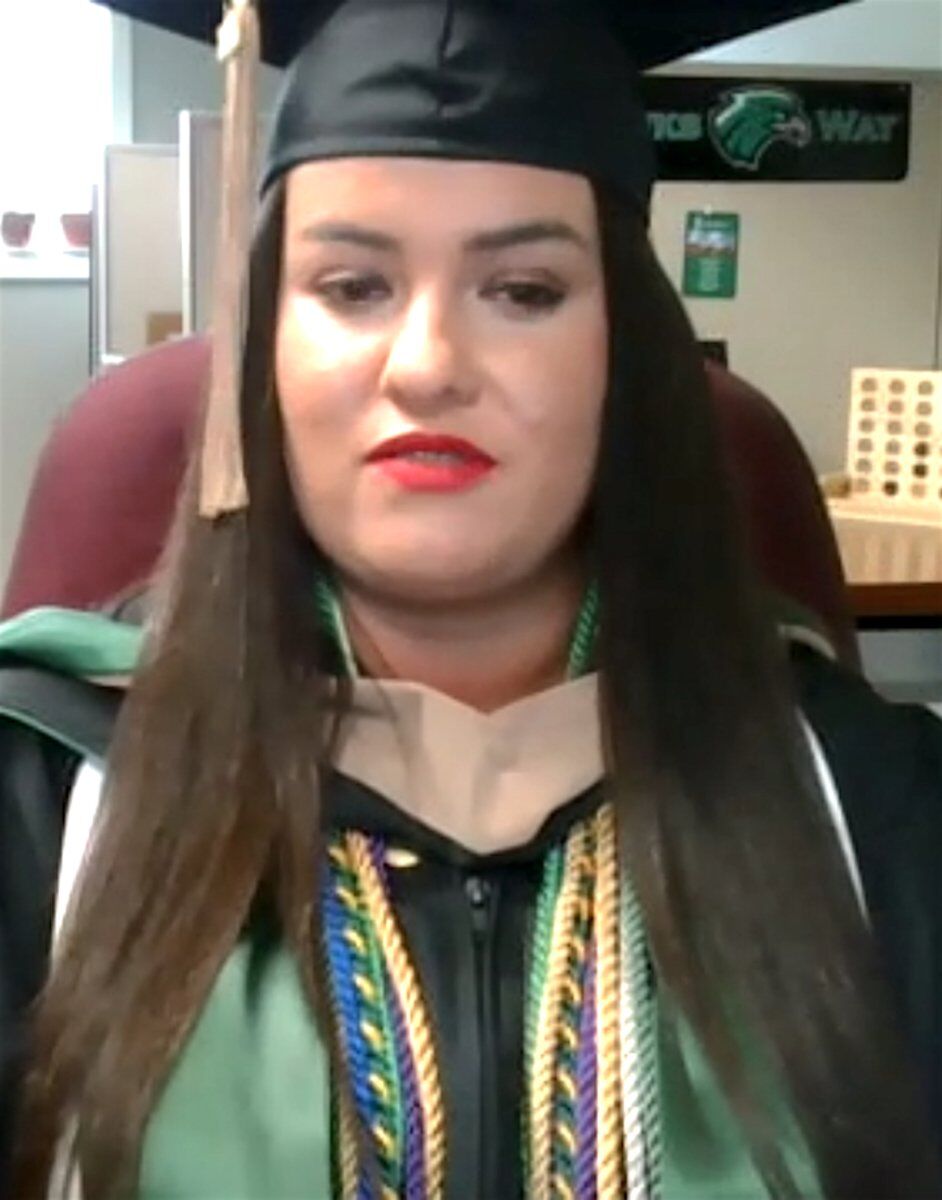 Cheyhoma Dugger (Choctaw) tells graduating NSU students about the importance of giving back to Indigenous communities that supported them.

Sara Barnett-Nsakashalo explains how NSU has conferred more bachelor's degrees to Native American students than any other university.

Cheyhoma Dugger (Choctaw) tells graduating NSU students about the importance of giving back to Indigenous communities that supported them.

The Center for Tribal Studies at Northeastern State University celebrated a rich tradition of educating Cherokee people during an annual event last week.

Started in 1851 as the Cherokee Female Seminary, NSU is the oldest institution of higher learning in Oklahoma, conceptualized because tribal leaders sought to advance higher learning for citizens. Since the state acquired the school in 1909, it has maintained a special mission to educate Native Americans.

Twenty-five percent of NSU students identify as "American Indian," which far surpasses the national average. Many Indigenous peoples face obstacles to furthering their education, which is why the American Indian Convocation is held every year to honor accomplishments of its Native American students.

"I embrace the legacy of this institution. I embrace the history," said NSU President Steve Turner, while addressing students who virtually attended the 21st event on Facebook on Wednesday.

According to the NSU Director of the Center for Tribal Studies Sara Barnett-Nsakashalo, for many years, NSU has conferred more bachelor's degrees to Native American students than any other university in the country.

"Native Americans have the highest dropout rates of any ethnic minority in the country. We want to recognize this accomplishment and provide an intimate opportunity for family and friends to be a part of that celebration," said Barnett-Nsakashalo.

She explained that for many Native Americans, graduation is a family affair, and for those less familiar with these traditions, commencement can be overwhelming, as it is difficult to see graduating students in a large, crowded room.

Native American commencements take place in a more intimate setting. During the 2020-'21 convocation, the Center for Tribal Studies invited a student drummer and singer to provide an opening and closing song, to give depth and meaning to the ceremony.

"They also have an opportunity to wear whatever traditional clothing that they want. During the commencement ceremony, graduates are limited on what they are allowed to wear," added Barnett-Nsakashalo.

Alisa Douglas, student program coordinator for Center for Tribal Studies, was tasked with organizing the event. She planned the program, worked with the award winners, and prepared the graduation stoles.

"It is important for them to know how proud their family is for them," said Douglas.

The Native American graduates can purchase the stoles they are able to wear, not just at the convocation, but also at the general commencement.

Katie Smith-Henshaw, who earned her bachelor's degree in integrative biology and has served as an advocate for students in STEM, won the 2020-'21 Mary G. Ross Award.

Cheyhoma Dugger (Choctaw) addressed the graduating students as the student speaker, stressing the importance of giving back to Indigenous communities that supported them during their educational pursuits.

"Our tribes, our communities have invested in us … so we can grow, thrive, and have an opportunity we might not have otherwise. … It is time to take our experiences and invest them in our tribes, our peoples, and communities," said Dugger.

She explained that after the McGirt vs. Oklahoma ruling, a space has been created for young Native Americans to serve in their communities, and she encouraged the graduating class to be vocal in support of tribal leaders.

"Don't waste the knowledge you've gained. Use it to invest in our tribes," Dugger said. "Protect the sacred so that years from now, we are still speaking our languages, practicing our ceremonies, understanding our histories. Be vocal to sustain the McGirt decision to restore what was lost to us so we can maintain our sovereignty."