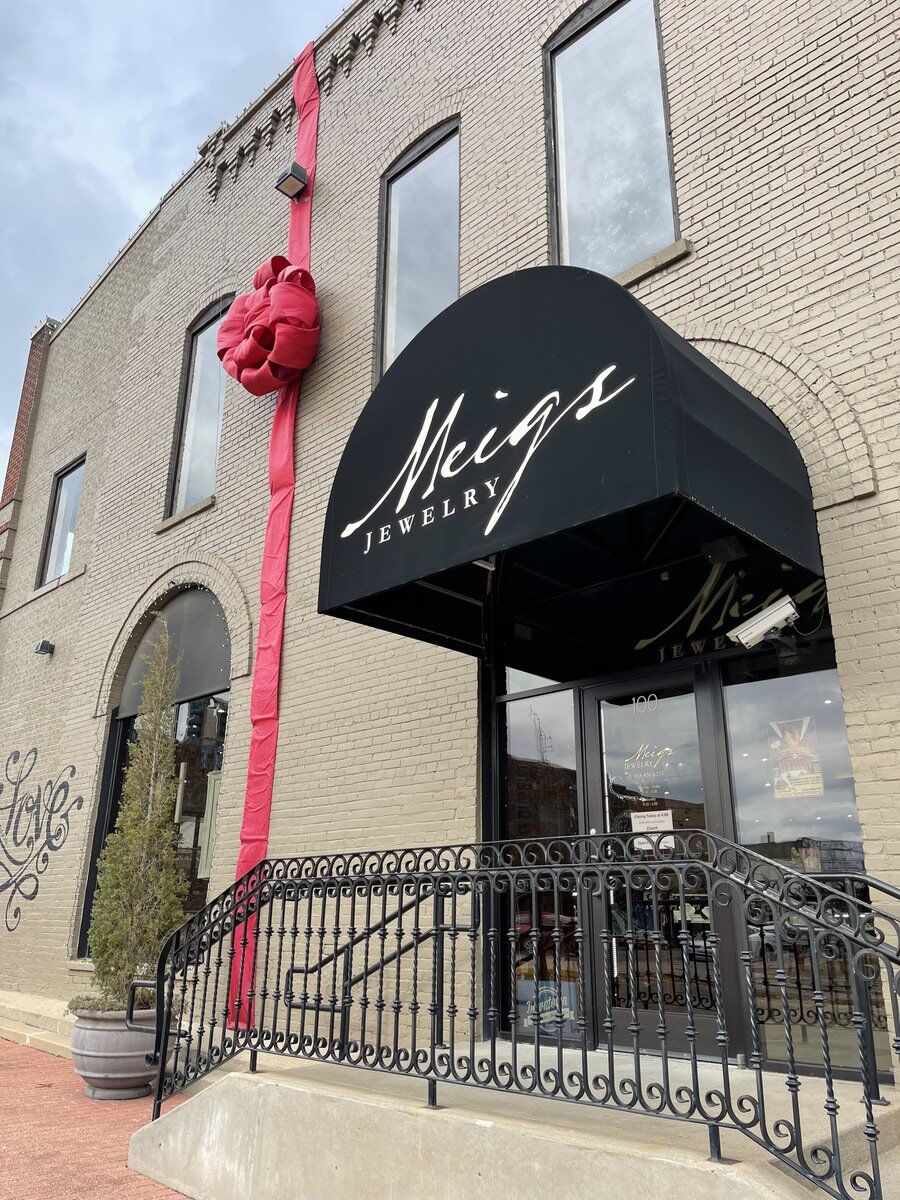 Meigs Jewelry has put up the big red bow on the side of its building, a sign that the holiday season is here. 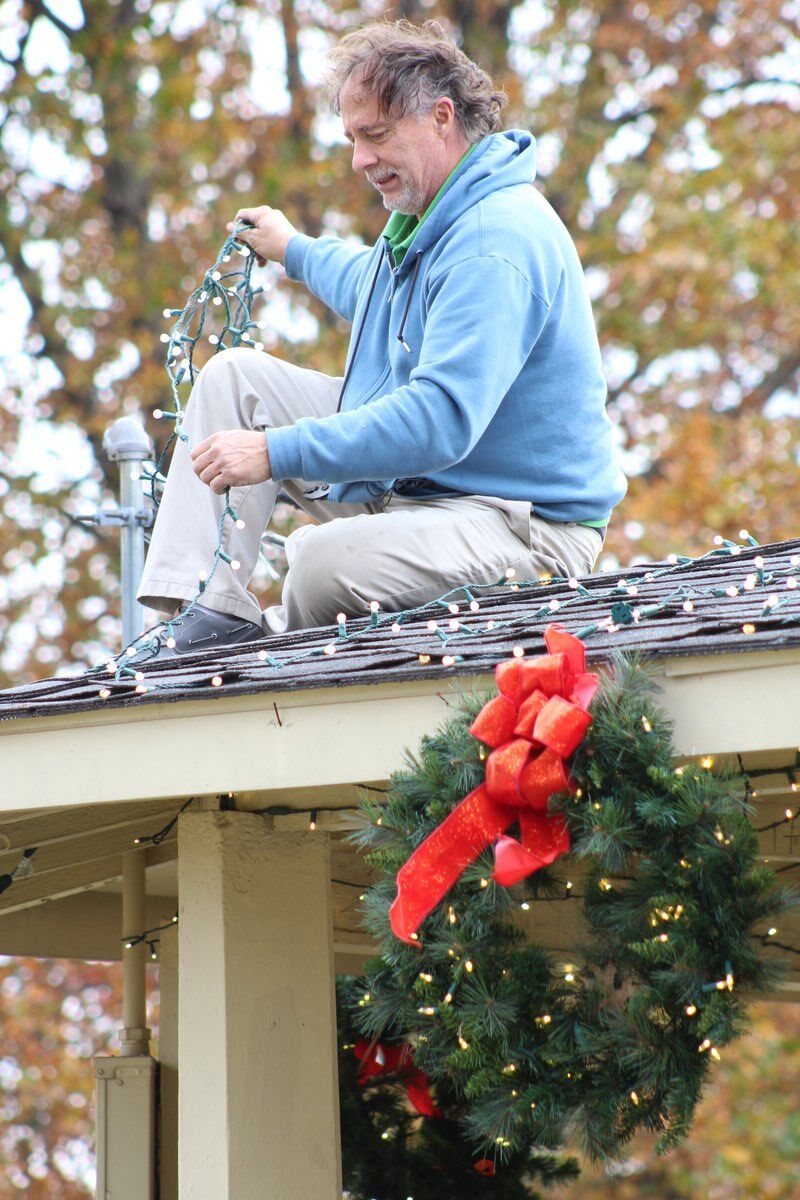 Doug McClure hangs up lights on the gazebo outside of the Cherokee National History Museum. 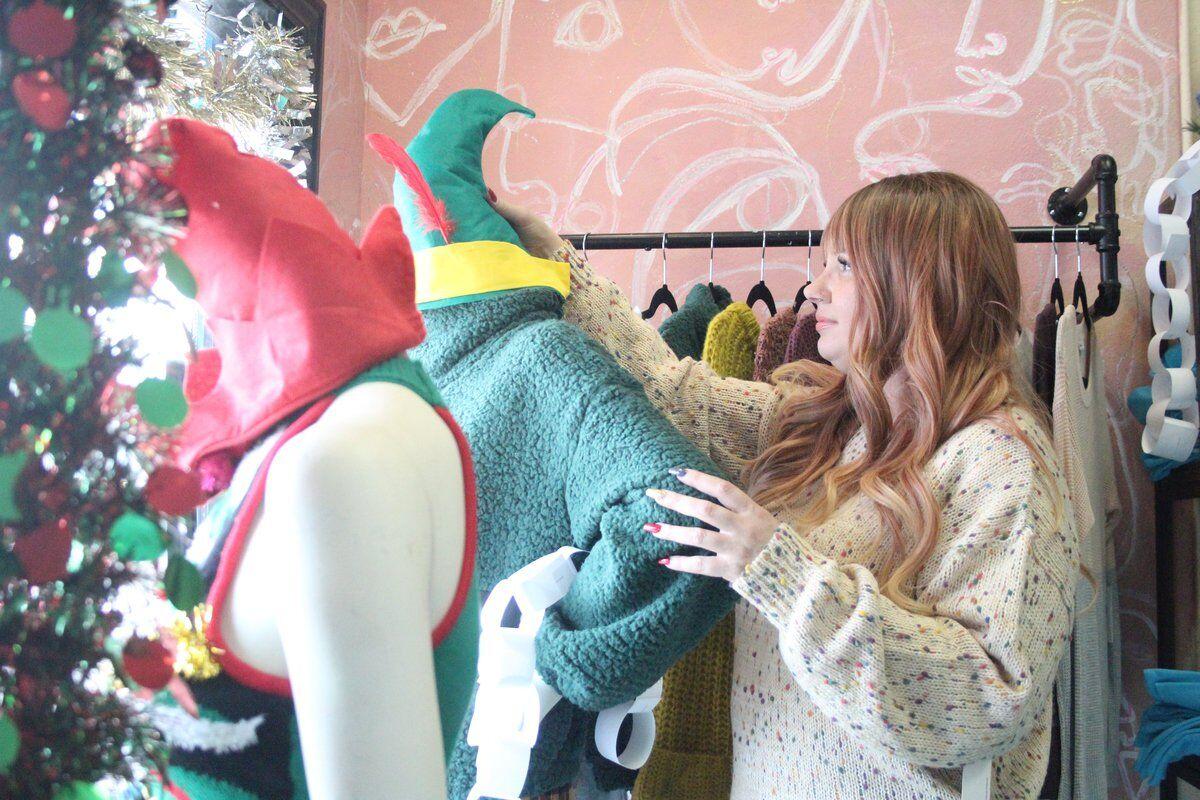 Meigs Jewelry has put up the big red bow on the side of its building, a sign that the holiday season is here.

Doug McClure hangs up lights on the gazebo outside of the Cherokee National History Museum.

Some families and businesses have a particular holiday decoration without which their season would not be complete. And area residents might notice them when they are out and about this year.

At Meigs Jewelry, the store’s large red bow, draped across the side of the building, has returned. Rian Cragar, who owns A Bloom Flowers and Gifts next door, said the bow is a staple in the community, and it’s a sure-fire sign the holiday season has arrived.

Todd Mutzig, owner of Meigs, said that every year, he has people volunteer to hang the bow up, which requires the use of a bucket truck.

“We put it up six or seven years ago,” Mutzig said. “Hunting is kind of the thing around here to do, so we came up with our own bow season. We went out and found the biggest bow we could buy and put it on the building. So if it’s bow season for the guys, let’s put a bow under the tree for the women, but the right kind of bow.”

While he hasn’t gone up yet, locals might keep a lookout for Santa Claus on the roof of Morris Cragar Flowers and Gifts. Each year, the business brings out a Santa that looks as though he’s scaling the building. It’s one of the many favorite decorations around town. The shop was closed Wednesday, so the owners could not be reached.

Tahlequah Main Street Association is hosting its annual holiday window display contest. Downtown merchants who signed up have decorated their windows with a holiday movie theme, so as people visit Muskogee Avenue to shop or watch this year’s Christmas parade, they can peek through the various storefronts.

At Beautiquey, Diana Gordineer put a lot of effort into styling the business with the theme of “Elf,” the 2003 flick featuring Will Ferrell.

“She went to thrift stores, Hobby Lobby, yard sales, and everything she got pretty much on a dime,” said owner Bryn Smith. “Even the two mannequins, which are broken, she found at Oklahoma City Supply Warehouse, where they collect broken mannequins and sell them at a huge discount.”

On the windows of Beautiquey, passersby will notice popular quotes from the Christmas film, and see the mannequins dressed as Ferrell’s character, Buddy, and Zooey Deschanel’s character, Jovie. Smith said she and staff love the movie, and it’s helped attract some business, too.

“The community spirit is awesome,” she said. “I have people who come in the store that haven’t been in before, because they just love it and the kids love it. It’s a classic.”

Beautiquey is just one of several stores participating in the contest this year. Also in the running are Junie’s Closet, Windmill Boutique, Workman’s, Too Fond of Books, A Bloom Flowers and Gifts, Arvest Bank, Meigs, Vivid Salon and Boutique, Nine One Eight Salon and Boutique, and FourNinety Creations. To vote for the best display case, visit the Tahlequah Main Street Association Facebook page and click the thumbs up or heart emoji under the photo of choice.

Main Street is lined with garland wrapped around the light poles. The lights have been set up at Norris Park, where the a Christmas tree-lighting will take place on Dec. 3 at 5:30 p.m. The Tahlequah Splash Pad is lit up at night, and the Snowflake Ice Rink is gaining more decorations as its opening day approaches.

The Cherokee Nation also has its lights set up in front of the CN National History Museum on Muskogee Avenue, where passersby can see the words “Merry Christmas” translated in Cherokee. The gazebo on the lawn of the Cherokee Square has also been adorned with garland, a tree and lights, which Doug McClure helped hang on Wednesday.

It’s common to see the same decorations on or inside several homes throughout the city. Cathy Cott has a light-up pig that goes on top of her house every year.

“He has a name and a complicated backstory,” Cott said.

Some decorations make their way out of storage every year, even if the owners aren't always thrilled about it. Tanya Brown said she has a fabric Christmas countdown that she reluctantly hangs every year.

“My mom used it every year when I was growing up,” she said. “She gave it to me in my 20s. I’ve hung it up every year since. Though now my recent Christmas decor doesn’t ‘match’ the fabric of the old countdown, I still hang it. I’m thinking of gifting it to my daughter.”