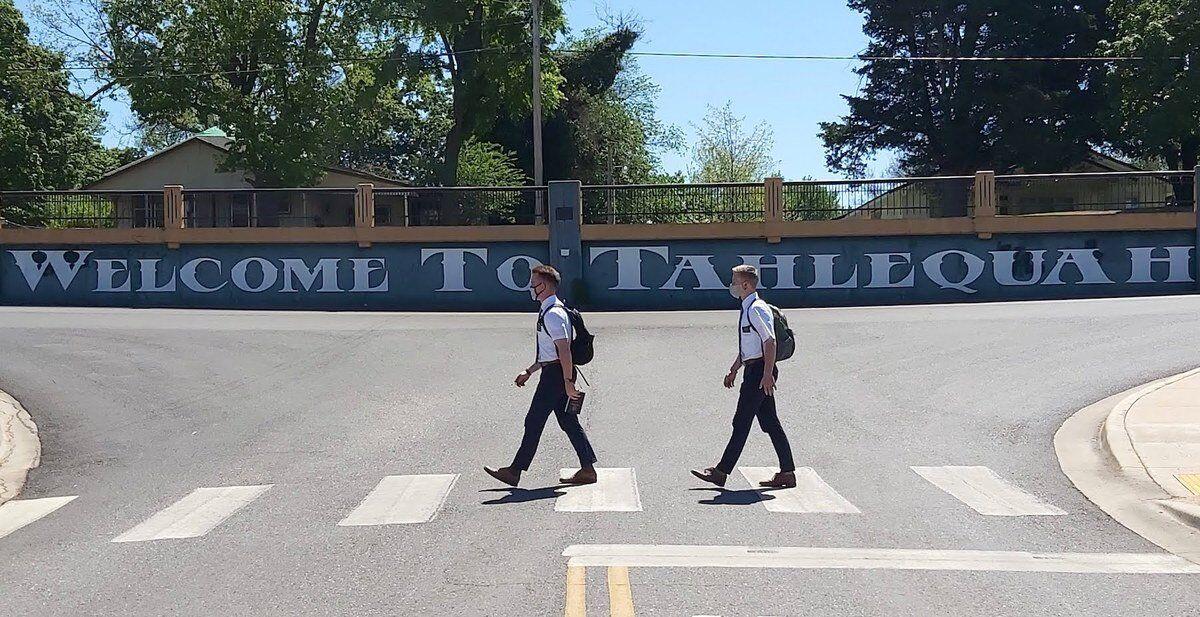 Elder Jackson Hill, left, and Elder Bo Barben are in Tahlequah as part of their two-year missions with the Church of Jesus Christ of Latter-day Saints. Both are from Utah. 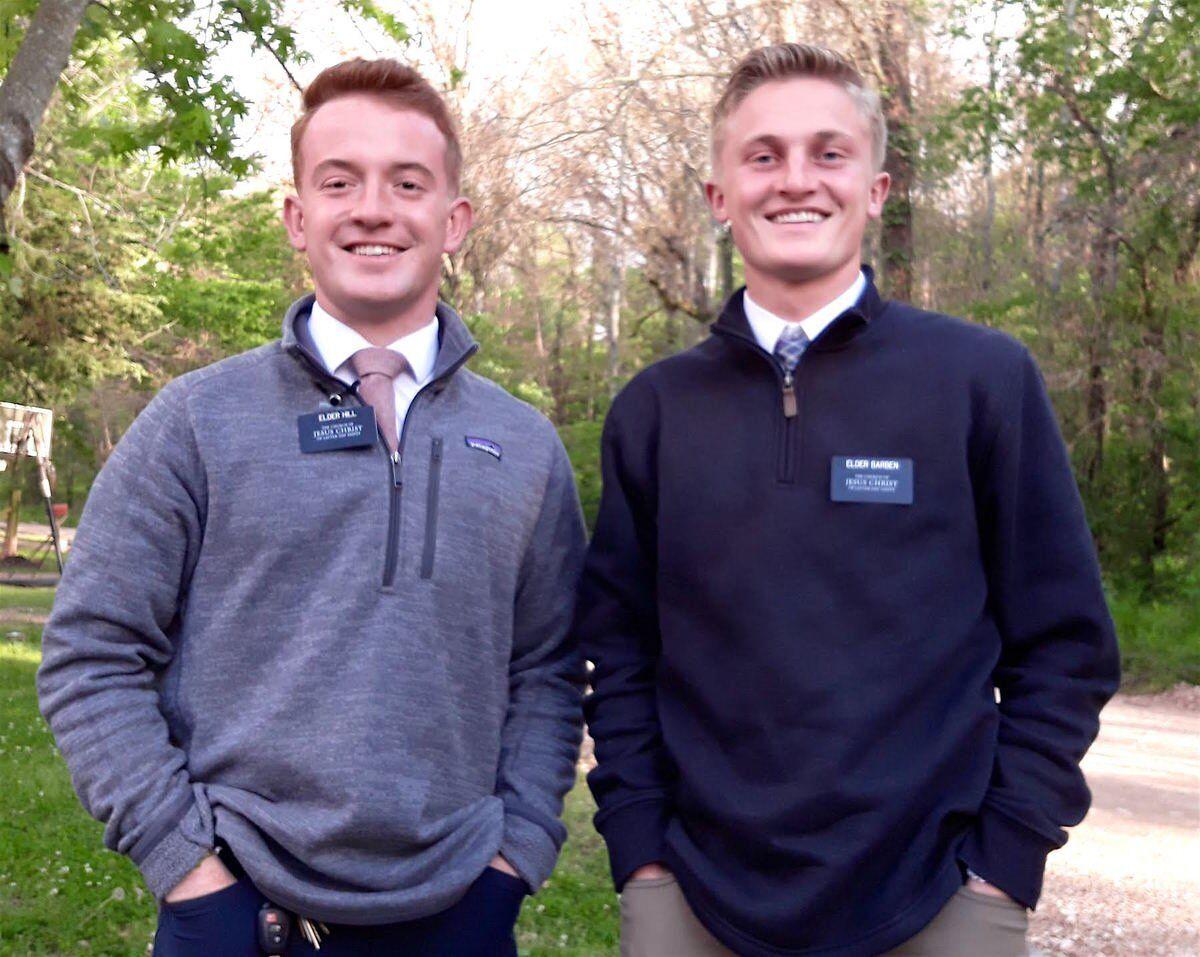 Elder Jackson Hill, left, and Elder Bo Barben, both 20, have been on their two-year missions with the Church of Jesus Christ of Latter-day Saints for about 21 months.

Elder Jackson Hill, left, and Elder Bo Barben are in Tahlequah as part of their two-year missions with the Church of Jesus Christ of Latter-day Saints. Both are from Utah.

Elder Jackson Hill, left, and Elder Bo Barben, both 20, have been on their two-year missions with the Church of Jesus Christ of Latter-day Saints for about 21 months.

In the Church of Jesus Christ of Latter-day Saints, young adults can choose to do two-year missions when they reach age 18. Tahlequah is often a temporary home to many who choose this path – including Elder Jackson Hill and Elder Bo Barben.

“Elder is a title for missionary. We both go by it for our two years out here,” said Barben. “We may ride around in white shirts and ties, but we’re normal people.”

Both said they knew they wanted to serve missions when they were of age, and they have already completed about 21 months of the time.

“The message we share has changed the world forever. It's a benefit to anyone who is willing to hear it,” said Hill. “It’s not that we’re important – we’re just 20-year-old guys – but the message is important. We believe the gospel of Jesus has been restored to its fullness. What’s cool is we don’t ask them to take our word for it. We have tangible evidence of our claim: the Book of Mormon. We let them decide for themselves through prayer.”

Elders can stay in one town for about three to nine months, but it is typically three to four months. Every six weeks, they learn if they will be staying where they are or if they’ll be transferred. They usually have a few days to prepare to move, but sometimes they may only have a few hours.

“We don’t have a lot of belongings while we’re out here. We have three suitcases each,” said Hill.

Hill has been to Altus, Mustang and Tuttle, and was in Edmond on the University of Central Oklahoma campus since July. He arrived in Tahlequah on April 6.

Barben has been to Ponca City and Enid, spending 16 months with people from the Marshall Islands and learning to speak Marshallese. He has lived here since Jan. 2.

“Tahlequah is by far the prettiest place in Oklahoma. People are so nice. People are down to talk to us, and as a missionary, it can be difficult to get people who want to talk with you. We’ve loved our time here,” said Barben.

Hill said he had hoped to come to Tahlequah.

“My favorite book growing up was ‘Where the Red Fern Grows.’ Tahlequah was the only place in Oklahoma I knew,” he said. “I’m fascinated by Native American culture.”

Elders come from all different backgrounds and parts of the world, but Hill and Barben are from Utah. Growing up, both men were athletes who played baseball and football. They even played baseball against each other when younger, but didn’t know one another until lately.

“Most of the time you won’t know anything about the companion until you’re assigned to serve together,” said Barben.

Elders always have at least one companion. Hill said sometimes three people serve together, but it is normally just two.

“This is what we do 24/7 for two years,” said Barben. “On Mondays we do laundry, clean, and go to the store. Then we have a few hours to go hike or something.”

Mondays also give them time to talk with their families. Hill said they don’t do any activities that could be dangerous while they are on their mission.

Barben said they saved up for two years for this experience, but they also received assistance from parents and their home ward, which is their church.

“We paid our own way to be able to sustain ourselves while we’re not working,” said Hill. “Our purpose is to invite others to come into Christ. We share that with anyone willing to listen, to test for themselves if they believe.”

Most people may see the elders walking or riding bikes, but they do have limited use of a vehicle provided by the church.

The elders currently attend the Tahlequah Ward of the Church of Jesus Christ of Latter-day Saints, but are not active with youth groups and activities there.

Barben said their duties haven’t changed through the pandemic, just the way they do them.

“The pandemic has been a big adjustment for everyone,” said Barben. “I don’t think I ever had a virtual meeting before the pandemic. Now I have at least one a day. We continue to work through different means like Facebook or social media instead of knocking on doors.”

Lately, they have been meeting in person a lot more.

“We’re wearing masks and doing our part to social distance. It’s a challenge adjusting to the technology,” said Hill. “When the pandemic started, there were six weeks where the only time we went outside was to go to the grocery store. That transfer cycle was a hard one.”

The guys said that before they were called to serve and began their missions, they enjoyed activities such as bowling, riding dirt bikes and four-wheelers, and hanging out with friends.

“When we go back, we’ll go to school and get families. We’ll keep the values and morals from the missions,” said Barben. “We’re normal people but I’m not the same person I was. I’ve grown a lot.”

Hill said when their two years are up, they will return to life as normal, but be forever changed and benefit by serving the Lord.