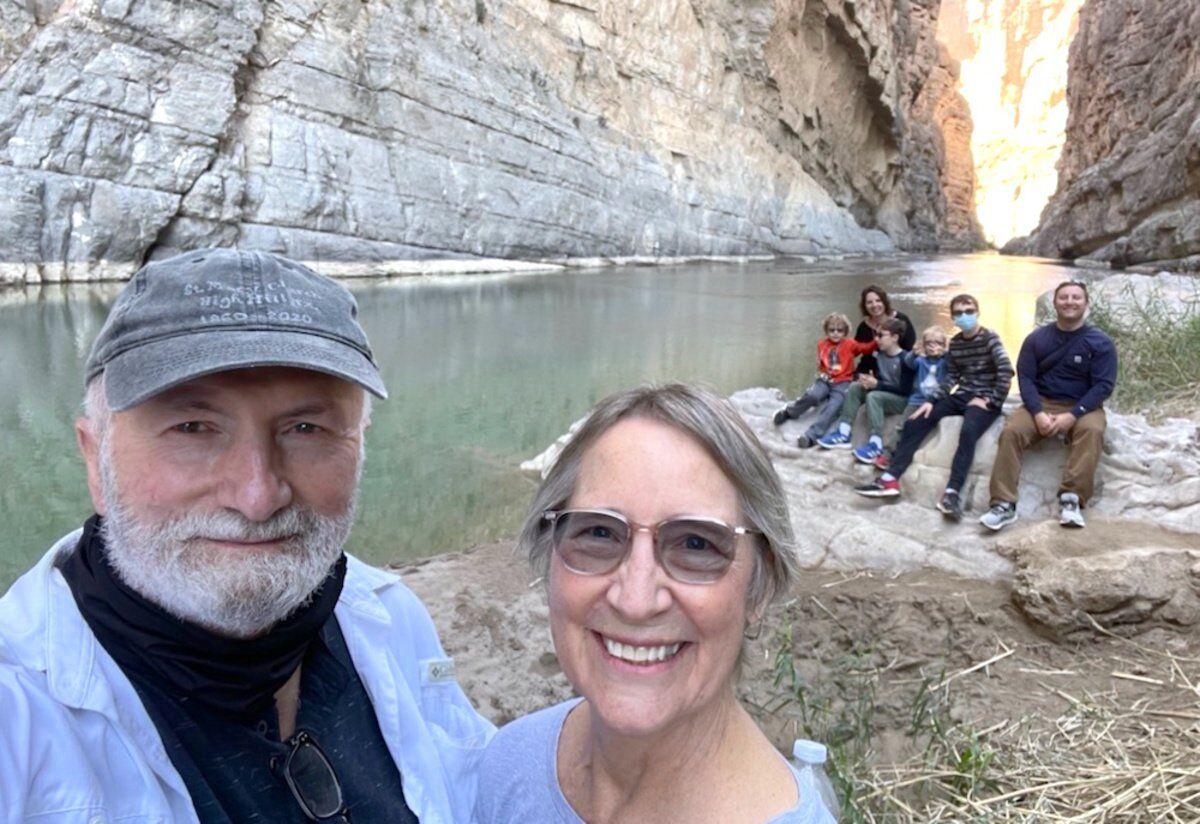 Carl, front left, and Cathy Farinelli enjoy hiking, traveling, and spending time with their children and grandchildren. In the back are their daughter Melody with her children Isaac, Lucus, Garrick, and Mattox, and her husband Matt Jones. 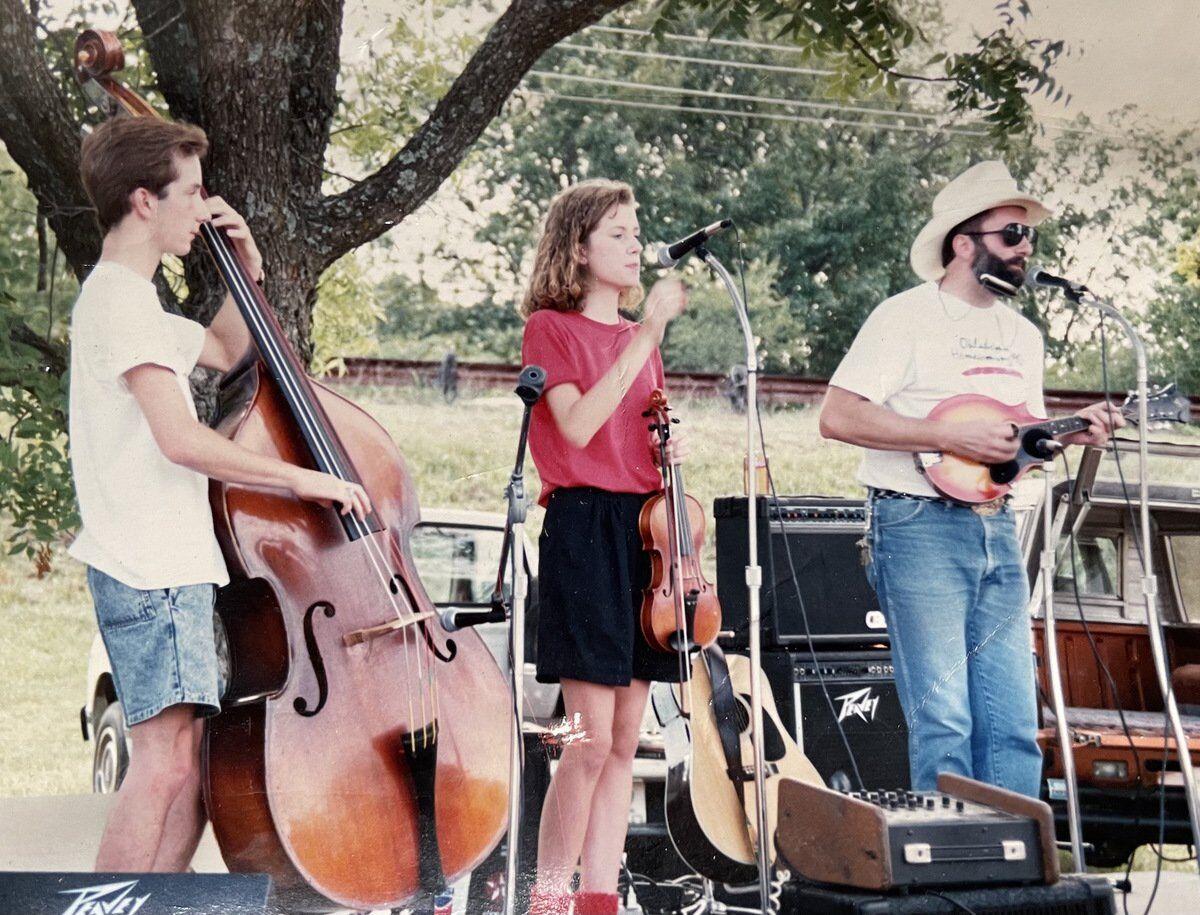 One version of the Farinelli Family Band featured, from left: Jacob, Rachel, and their dad Carl.

Carl, front left, and Cathy Farinelli enjoy hiking, traveling, and spending time with their children and grandchildren. In the back are their daughter Melody with her children Isaac, Lucus, Garrick, and Mattox, and her husband Matt Jones.

One version of the Farinelli Family Band featured, from left: Jacob, Rachel, and their dad Carl.

For Rachel Holloway, one of the best parts of growing up as a Farinelli kid was the ability of her parents, Carl and Cathy, to turn any situation into a positive one - or, at least, an effective learning experience.

"To this day, when something negative happens - or when I may feel I have failed - I hear fun phrases in my head; Dad telling me to 'turn the world right side up,' or Mom jokingly saying, 'Well, if that hurts, maybe you shouldn't do that,'" said Holloway. "They made positivity seem so simple, and those little positive phrases - there are hundreds of them - that I thought were funny as a child, or even rolled my eyes at as a teenager, have served me greatly going through the typical challenges life brings."

"Together" is the key word for the Farinellis.

"Our family plays music, but we also practice martial arts, we hunt and always eat what we shoot. My mother taught me how to sew, and she made my favorite outfits for Easter, First Communion, family weddings, and she made my first competition outfit when I took baton lessons at age 4," said Holloway.

Education was always a priority.

"My parents gave us a love for lifelong learning; we all have graduate degrees," she said, adding that the family was always fun. "Our family is silly, loving, hard-working, busy; we all love to sit and visit. We all have a front porch or back patio so we can do just that. We scream and run to one another at the airport, and we can't say goodbye without a very silly goodbye dance in the driveway."

Carl's and Cathy's oldest child, Jacob, was a gifted musician. The sadness of losing him was a shock.

"Jacob was an amazing person. After beginning playing fiddle, bass, and drums with me, he went into the Houston Magnet Schools music programs," said Carl.

First, he and his sister, Rachel, attended the elementary magnet for performing arts, where Farinelli was principal. They were members of the Houston Youth Symphony. Jacob continued through the magnet schools for music at the junior high level and ultimately was accepted into the Houston High School for the Performing and Visual Arts, where he played bass in their jazz program.

"When I was offered a position at NSU, Jacob initially chose to live with his aunt and uncle in Houston so he could continue at HSPVA. However, after a semester, he could not stand to be away from his immediate family anymore, so he joined us in Tahlequah," he said.

Fortunately, his jazz instructor at HSPVA was an old friend of Joe Davis' at Northeastern State University, so they arranged for Jacob to continue playing jazz in Tahlequah.

Besides playing with the family band and the NSU summer shows for six years, Jacob worked at BancFirst while pursuing his degree at NSU. He also worked briefly at the Tahlequah Daily Press in the composing department. He played with Joe Davis' jazz band and the Shangri-La Orchestra, and gave lessons.

Jacob had been married to his high school sweetheart for 10 months and had just been accepted into the NSU College of Optometry doctoral program when he died of a previously undiagnosed heart deformity while playing bass with Davis during an NSU summer show.

Driven to help empower others, Carl has taught music, dance, and martial arts classes. When they first came to Tahlequah, he performed with Jacob and Rachel as The Farinelli Family Band for many area events and all over the state for Oklahoma Homecoming celebrations. Matthew, the youngest child, played bass and sang in the band for a while.

Carl has performed with the late Dr. Jim Walker, Paul Crosslin, Elmer Whittle, and other older Western swing and bluegrass musicians at the Veterans of Foreign Wars, and at the Tahlequah Senior Citizens Center's dances for 14 years.

When Holloway and her husband opened a music store and arts school in downtown Tahlequah, Carl taught classes for her.

"She, Matt, and I played in several NSU summer shows, including Downtown Country and in 'Take Me Back to Tulsa,' a musical that Dr. Jim Walker co-wrote with me about Bob Wills and the early development of Western Swing music In Oklahoma," Carl said.

When Matthew reopened the family recording studio for recording and promoting several local bands, including his own Austin Cobb Band, he found studio recordings that had been engineered by Mike Jett on the old analogue recording equipment.

"Matt always dreamed of playing with his older siblings and me in the Farinelli Family Band, so he digitized those recordings and added himself playing drums, guitar and harmony vocals," said Carl. "Even though Matt was only 8 years old when he lost his older brother, he was able to use his skills as a musician and sound engineer to play across time with his brother, thus giving the CD its title, 'Farinelli Family Across Time.'"

He even added more tracks with Rachel and her daughters. Therefore, the "Farinelli Family Across Time" CD, with all 23 traditional and original songs, was really over two decades in the making. It's available on CD or can be downloaded on iTunes.

While Matt was working on his master's at NSU, he was playing music with Dr. Brett Fitzgerald and John Fite. They called themselves the 3Fs.

"He asked me to join them, and thus we became the 4Fs. Then he moved to Nashville a couple of years ago, so now we are the 3Fs again, except for every now and then when he comes to sit in with us," Carl said.

All public performances of the 3Fs or 4Fs have been put on hold during the pandemic.

"Plus, Catherine has been participating in a clinical trial at M.D. Anderson. When she has to be there, we stay with our daughter, Melody, her husband, Matt, and their four boys, who are being home-schooled during the pandemic," said Carl. "While there, they get lots of lessons with mama and grandma, and music with grandpa. If you look me up on Facebook, you can see some of the music I am doing with my grandsons. It is like a new lease on life, definitely."