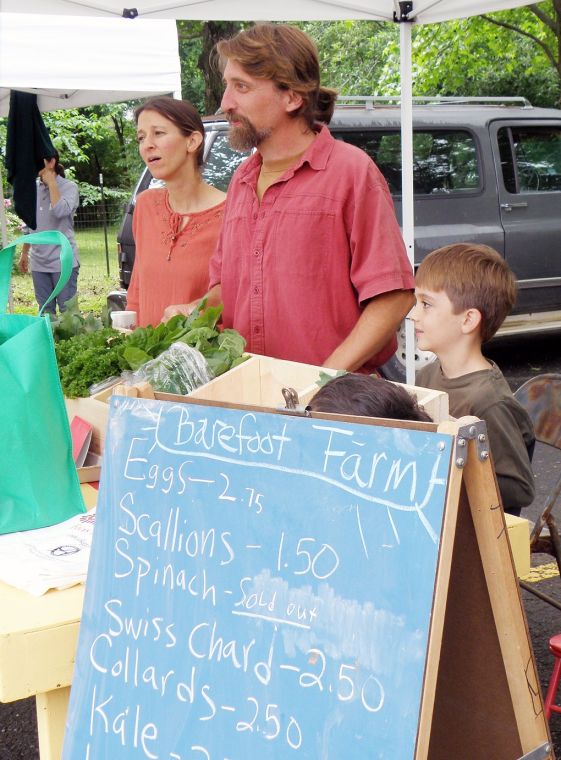 For Johnny and Karen White of Barefoot Farm, this is their first year as Tahlequah Farmers’ Market vendors. A steady stream of customers picked out selections from their produce. 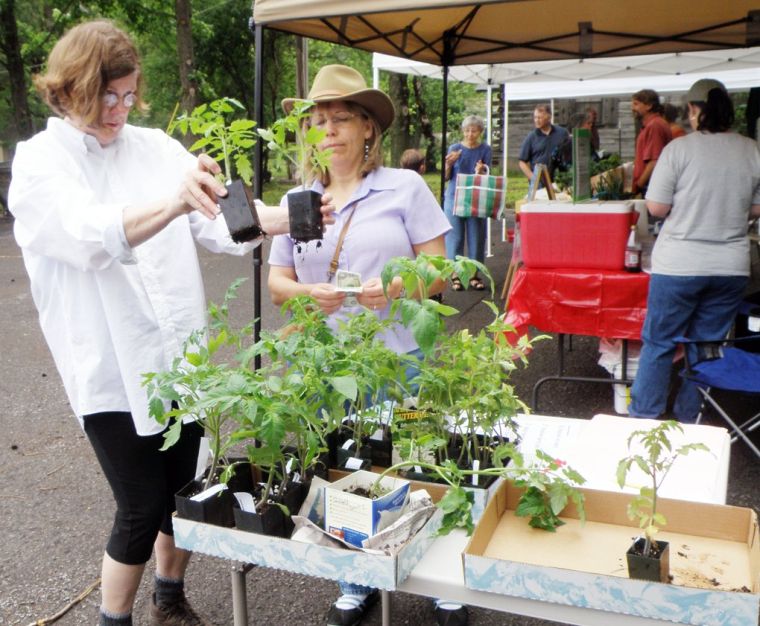 Katherine Alexander, left, was a buyer and seller at Saturday’s Tahlequah Farmers’ Market. After selling her homemade breads, she picked up some heirloom tomato plants from Diane Stevenson.

For Johnny and Karen White of Barefoot Farm, this is their first year as Tahlequah Farmers’ Market vendors. A steady stream of customers picked out selections from their produce.

Katherine Alexander, left, was a buyer and seller at Saturday’s Tahlequah Farmers’ Market. After selling her homemade breads, she picked up some heirloom tomato plants from Diane Stevenson.

Saturday’s dreaded early morning deluge failed to materialize, and a few rays of sun even peeked out as shoppers wandered through the colorful tents displaying fresh items at the Tahlequah Farmers’ Market.

The market, now in its third year, offered garden-fresh vegetables, locally produced meats, and other specialty items such as homemade soaps and artisan breads. The market is open from 8 a.m. to noon each Saturday in the parking lot of First Lutheran Church, behind Reasor’s.

While shoppers at the market may not be able to meet the hens that laid the eggs they’re buying, they can talk with the person who fed the chickens and gathered the eggs fresh that morning. They can discuss how the produce they purchase was raised, and frequently exchange gardening gossip with fellow enthusiasts.

During the past year, the movement to obtain locally grown, fresh and organic purchase has blossomed, and the Sustainable Tahlequah group has organized and gained momentum, creating an expanding network of members and activities.

So far, 35 local vendors have signed up to participate in the market, although not all were present Saturday.

Julie Gahn, coordinator of the Tahlequah Community Garden, has been involved with the market since it began. She was pleased with this year’s turnout after the first hour of commerce.

“We seem to be doing well. The flow feels good and the number of vendors for opening day feels good,” she said.

She has been active in the organizations trying to raise awareness about locally produced food.

“It’s hard to tell if it’s more interest, or people with the interest finding out about us,” she said of the increased numbers of people participating in the market. “It’s fun to see some old faces, and make some new friends, too.”

Factors such as a recent recommendation by presidential advisers about the benefits of organic food also may have helped, she said.

The first speaker Saturday was George McLaughlin Jr., a member of the Seed Savers Exchange, discussing the “Beauty and Practicality of Seed Saving.”

Next week, Gahn will hold Green Country permaculture conversations at 9:30 a.m. inside the church building, while Heather Winn, Oklahoma State University extension educator, will present a children’s program outside at 10 a.m. Winn’s topic will be “Tops and Bottoms: What parts of plants do we eat?”

Future seminars will include gardening tips, as well as cooking demonstrations and arts such as spinning.

Shoppers Saturday were eager to see what this year’s vendors had to offer, and said they enjoyed the opportunity to visit with the growers.

Garry and Sandra Durham stopped to talk with Chou Xiong, whose bok choy, spinach, cabbages, green onions, and herbs were lined up on a table.

“I stir fry it, I boil it,” she told them of her cooking techniques.

“I would love to have a spinach salad. I’ve been wanting fresh spinach,” Sandra Durham said as she picked out a bag.

“We have a garden, but it’s not as advanced as what we can get here,” her husband said.

“I did put out squash this year, and it’s blossoming,” Sandra Durham said.

Another man walked up and scrutinized Chou Xiong’s remaining three cabbages, which were priced at $2 each.

“How much will you take for all?” he asked.

“I’ll take $5,” she replied, and responded to another question. “They’re organic – more flavor.”

The transaction complete, the customer placed the cabbages in a bag he had brought, rather than accepting a plastic bag.

While many of the produce items would tempt any vegetarian, meat lovers also could find treats at Hutchins Farms, which offered lamb chops, lamb stew meat and ground lamb.

Katherine Alexander gets up early on Saturdays to make her homemade bread for the market, and usually is rewarded by selling it out early. This week was no exception, and she took a break to look at some tomato seedlings grown by Diane Stevenson.

“Now I’ll go home [and] plant tomatoes, dig potatoes,” she said, after picking out some heirloom varieties of tomato plants to try.

“Julie Gahn asked me to grow some heirloom tomatoes, because people are asking for them,” Stevenson said.

“One of the things I’m excited about is having a seed vendor here,” Gahn said. “I’ve been asking her [Stevenson] to do it.”

Alexander said she was pleased with the number of shoppers.

“It’s a very good turnout. We’ve never had this many people on opening day,” she said.

“This year we’ve got a bigger turnout of vendors than we have in the past,” she said. “This is great. And I’m just so grateful that we didn’t have a whole bunch of rain.”

Johnny and Karen White of Barefoot Farm, assisted by Calvin White, 7, and Devlin Zamarron, 5, sold a wide selection of spring produce. This is their first year at the market.

“We didn’t know what to expect, so I’m pleased,” Johnny said.

What about the boys?

“I think there’s a whole bunch of people here that I like,” Calvin said.

In some instances, everybody and his dog showed up for the market.

Carl DePaula was one of the early shoppers, heading to his car with his dog, Cleo, in tow on her leash. He’s a veteran Farmers’ Market customer.

“I got bread, lettuce, radishes, green onions, and two kinds of pet treats,” he said.

An expectant Cleo looked up, and DePaula rewarded her with a sample of a couple of pet treats before heading home.

Check it out
For up-to-date information on events at the Tahlequah Farmers’ Market and what varieties of produce and other items will be for sale each year, check the website, tahlequahfarmersmarket.com.

Personal shopper
If you’re at work or otherwise can’t attend the Tahlequah Farmers’ Market on Saturday mornings, this year you can have a personal shopper pick out the produce and other items on your shopping list. Julie Gahn, who has been involved with the market since its inception, will provide a personal shopper service. Tentatively the fee is $5 or 10 percent, whichever is less. Call Gahn at (918) 207-9107, or email her at TFMpersonalshopper@yahoo.com to work out arrangements and discuss your shopping list.