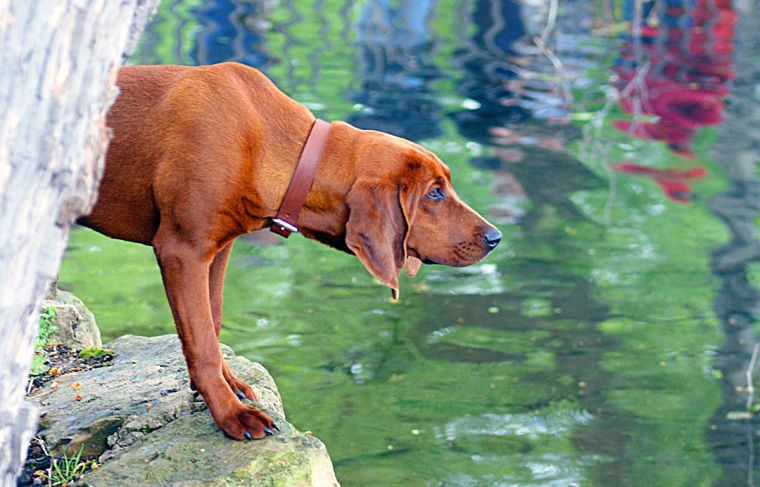 Dozens of howling hounds gathered along the creek near Beta Field in downtown Tahlequah Saturday for field trial events. 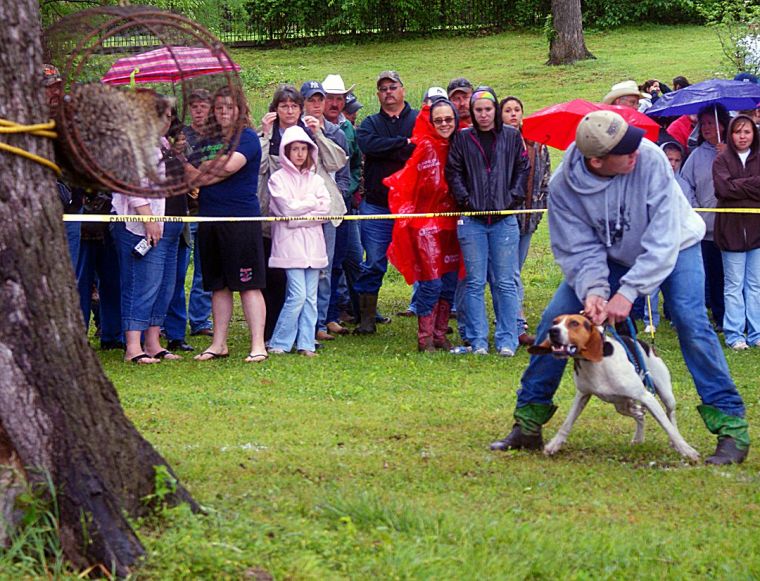 Hound dog Sam I Am kept his eye on the prize - a caged raccoon - as field trial organizers prepared to pull the creature into the tree. Sam’s owner, Dustin Feemster, of Peggs, watched for the signal to release. 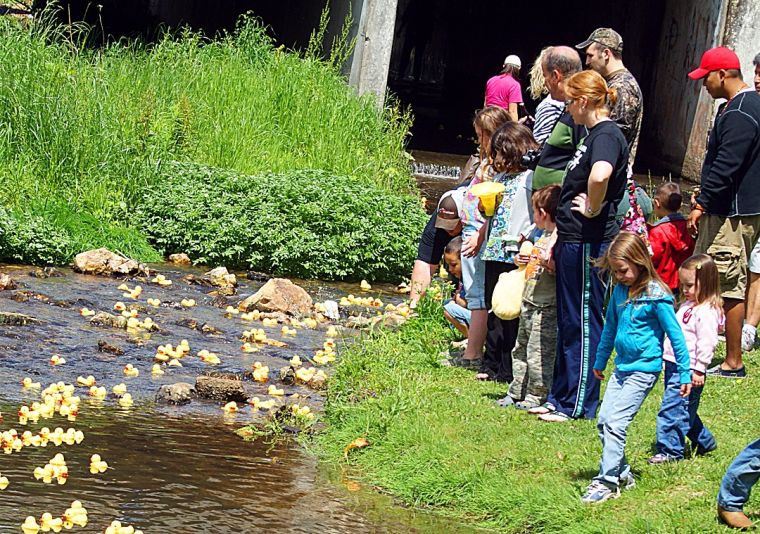 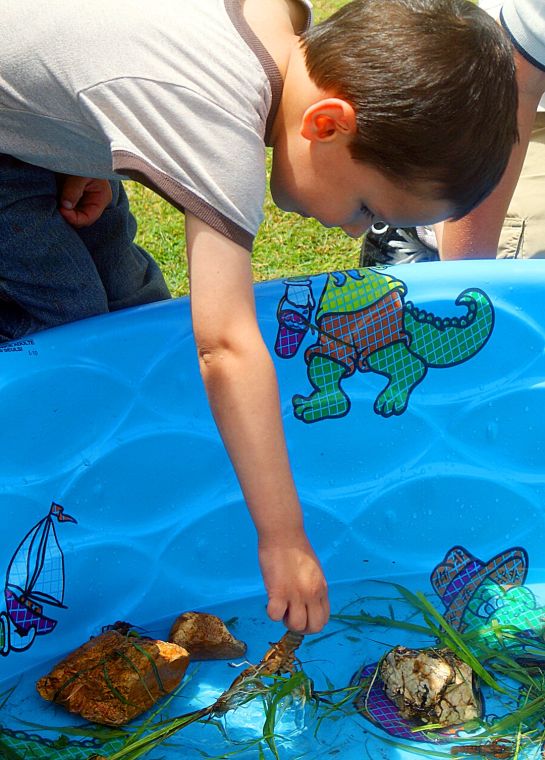 Tahlequah’s Red Fern Festival crawdad hole always garners massive attention from both children and adults. Four-year-old Carson Irving had no fears about reaching in and taking hold of several of the creatures as they swam beneath the surface of the water Saturday.

Dozens of howling hounds gathered along the creek near Beta Field in downtown Tahlequah Saturday for field trial events.

Hound dog Sam I Am kept his eye on the prize - a caged raccoon - as field trial organizers prepared to pull the creature into the tree. Sam’s owner, Dustin Feemster, of Peggs, watched for the signal to release.

Tahlequah’s Red Fern Festival crawdad hole always garners massive attention from both children and adults. Four-year-old Carson Irving had no fears about reaching in and taking hold of several of the creatures as they swam beneath the surface of the water Saturday.

For the last four years, the sweet smell of barbecue has wafted through downtown Tahlequah during the Red Fern Festival.

The only thing that can usually distract visitors from that aroma is the sound of dozens of howling hounds as they catch the scent of a raccoon along Town Branch Creek.

The fourth annual Red Fern Festival saw both rain and shine, but it didn’t keep a large group of visitors from flooding the area for the many events.

“I really liked the movie,” he said Saturday.

A sea of people gathered Friday night for a screening of the original “Where the Red Fern Grows.” Kayden hadn’t seen the movie before, but after catching it Friday, had a new appreciation for the many hounds he saw up-close Saturday.

“Can we get a ‘coon dog?” Kayden asked, directing the question toward his mom, Katelyn.

She asked him if he thought he could keep up with such a large dog. Kayden nodded that he could, but as he watched the dogs anxiously tug at their leashes across from where he sat, he decided he couldn’t.

Others enjoyed Friday night’s Red Fern Race and Dog Jog, or visited food vendors or other booths set up inside the park. The crowd might have been the biggest for a Friday night since the event’s inception in 2007.

“I don’t think I can recall seeing so many people,” said Tahlequah Area Chamber of Commerce Tourism Director Kate Kelly.

Saturday started out a bit dark and rainy, but participants in the tractor parade toughed it out for spectators. Jack Ging, who played Billy’s father in the original “Where the Red Fern Grows” movie, served as grand marshal.

“The rain was a challenge for us this year, because we’ve been so lucky in the past to have excellent weather,” said Kelly.

Carson Irving, 4, wasn’t bothered by the rain. He made his rounds through Beta Field at Northeastern State University and the events at Norris Park. For his second year, Carson worked his way to the bustling crawdad hole. Other children stopped to admire the creatures, but wouldn’t dare reach in to grab one.

Carson showed no fear as he dipped his hand into the water and took hold of the crawdad, then let it back down into the liquid and went about his business.

Kelly and other organizers around that site said this year’s batch of crawdads was “extra feisty.”

Popular events returned to the Red Fern Festival like the barbecue cook-off, with the addition of chili competition; the hound dog field trials, which introduced visitors to new race events; the 5C’s Car Show around the Cherokee Square; and local bands providing live music Friday and Saturday.

Leadership Tahlequah XIII introduced the first ever duck race - referred to by some as  “Tahle-quack” - to the waters flowing through the city’s downtown parks. The group sold out of its hundreds of ducks, said Kelly. The first ducks to the finish line put some cash prizes in their owners’ hands.

Hounds like Dustin Feemster’s Sam I Am raced through mud, waded through water and literally climbed trees in their focused efforts on catching what they believed to be the prize, a caged raccoon. They never actually got the ‘coon, of course - or those rubber ducks drifting through the water, as tempting as it might have been.

Tanya Myers, who drove from Broken Arrow to attend the festival, said her family enjoyed every aspect of the Red Fern event Saturday.

“We’ve enjoyed the barbecue cook-off, and so now we decided to hang out by the hound dog [field trial events],” she said as she watched dogs claw and climb at a tree. “I don’t think we’ve ever experienced something like this, but now we have and it’s been great. I remember picking up [the book] to read it as a child, and of course I also remember the movie, so it sort of ties it all nicely.”

Myers and her family weren’t the only ones to travel from outside Cherokee County for downtown’s events.

“I’ve talked to several people from out of town, from out of state,” said Kelly. “And it’s great that the Red Fern Festival continues to draw people to our community. We want them to see Tahlequah, to visit Tahlequah, and to come back. But it’s also so wonderful to see many local people.”

A number of groups and organizations benefit from the Red Fern Festival events. Kelly said entities who haven’t participated, but would like to next year, can contact the Chamber in the coming months.

“All in all, I think it turned out well. The rain kept a few people away Saturday morning, but when the rain cleared and the sun came out, it became just, as always, a really fun, nice, family event,” said Kelly. “And none of this would have been possible without the wonderful cooperation we received from the City of Tahlequah, from our downtown merchants, and certainly our sponsors.”

The genesis for Red Fern is the novel, “Where the Red Fern Grows.” Author Wilson Rawls grew up near Tahlequah, where the story is set.

“Many of the people who call and write us read the story as a young person and make a visit to Tahlequah specifically because of the connection they have with this story,” said Kelly.