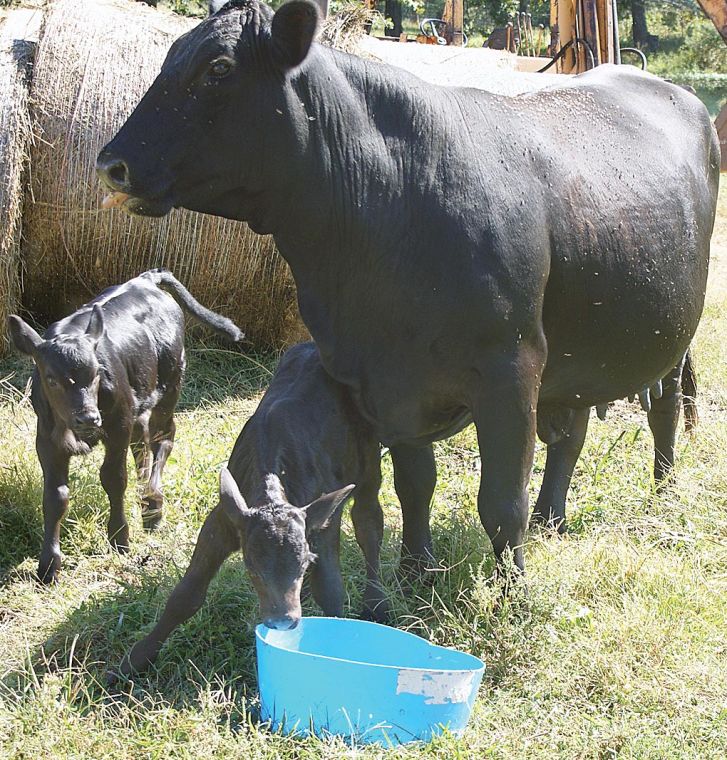 Momma cow “018” watches over her newborn heifer twins, the fifth or sixth set of twins she’s given birth to in the last five or so years. 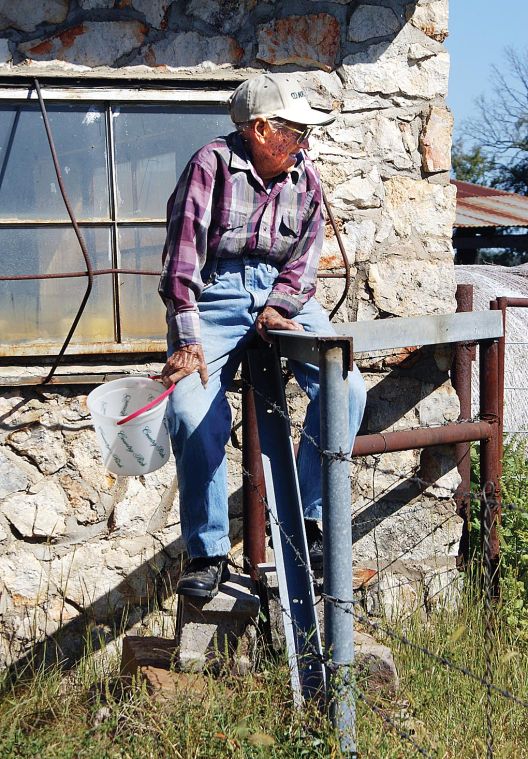 At 94, local Edna Bailey still climbs over a fence to feed “018,” her cow that recently gave birth to its fifth – maybe sixth – set of twins, and about 100 other cows on her 140 acres. Having five or six sets of twins is a rare occurrence for cows.

Momma cow “018” watches over her newborn heifer twins, the fifth or sixth set of twins she’s given birth to in the last five or so years.

At 94, local Edna Bailey still climbs over a fence to feed “018,” her cow that recently gave birth to its fifth – maybe sixth – set of twins, and about 100 other cows on her 140 acres. Having five or six sets of twins is a rare occurrence for cows.

LOST CITY – After five, maybe six, sets of twin calves, local bovine “018” is on a roll. Experts will quickly point out any cow that gives birth to twins is a rarity, which is why the Daily Press met up with Edna Bailey in January 2007. Then, at age 92, Bailey was proud to explain how 018 had just given birth to her third, maybe fourth, set of twins. Bailey suspects the cow’s first calf, born in 2004, may have had a twin that didn’t survive. “We think she has two heifers,” Bailey, now 94, said Wednesday of the latest set. Bailey and her son, Chester, care for 140 acres and about 100 head of cattle. On Sept. 18, they placed 018 into her own little pasture of land, and the next day, she gave birth to – surprise, surprise! – twins again. “Usually she goes away as far as she can to give birth,” said Bailey. “Then we have to round them up and move them back up here. We were lucky this time.” (Back during the 2007 interview, Bailey took then-Press Staff Writer Eddie Glenn into the frozen, cow-pile-covered pastures via pickup truck to track down 018, who had gone off to hide with her third set of twins.) Twins sometimes pose a problem for ranchers because the mother cow will often only feed one, and the Baileys have experienced that. “Usually, we’ll have to bottle-feed one,” said Chester. “But she’s a big ol’ cow. She’s a good momma.” The cow is quite protective of her new twins, and she grunted a warning as Chester went around the fence to shoo the twins back toward the barn for a photo session with the media. Meanwhile, Bailey climbed the fence with a bucket of feed and coaxed 018 to come up and eat. “I feed her night and morning,” said Bailey. “I pretty well keep a count of the cows and check on them, when I’m not baling hay.” Chester says they have two 2-year-old cows from 018, and those bovines have also given birth, but not to twins. For those keeping official count, 018 has given birth to 10 calves in about five years: Feb. 21, 2005, she gave birth to a bull and a heifer; Jan. 19, 2006, she gave birth to two heifers; Dec. 11, 2006, she brought forth a bull and a heifer; and Oct. 31, 2007, she gave birth to two heifers. “She has calves every 11 months,” said Chester. “We expect the next ones will be twins, too.” Cherokee County Oklahoma Cooperative Extension agriculture educator Roger Williams said that situation is definitely rare. “It’s a deal where it’s kind of genetic,” said Williams. “They are pre-disposed [to have twins]. The thing about it is, it’s not a trait ranchers are happy with, because one [calf] usually has to be bottle-fed.” Data found online shows twin births in cattle are often as rare as one set in every 4,000 births. Goats and sheep, on the other hand, have twins quite often. In the case of cattle, Williams said if one twin is male and the other female, the female is called a “freemartin,” and is unable to reproduce. Still, Bailey’s twin-birthing heifer has generated attention across the nation. Jay Leno’s crew attempted to have Bailey on the late-night show, but Bailey didn’t want to go. When asked about it now, she’s not exactly sure why she didn’t want to be on Leno’s show. “Well, I didn’t know whether I was pretty enough to be on TV,” she said, joking. “Nah, I’m sure I was busy or something. I can’t quite recall exactly what I was doing.” She considers herself “lucky” to be actively involved with the cattle and daily operations of the farm. She’s lived in the area her entire life. “I was born on that mountain over there, I’m told,” she said, pointing to the north of her house. She’s healthy, though she admits there’s a slight crick in her back from years of toting around 100-pound feedsacks. Bailey and her husband had two boys and two girls. At age 33, she became a widow, not long after she and her husband finished building their rock house. She continued running a Grade-A dairy for years, and later passed the ownership of the ranch to her kids. About a month ago, one of her sons died from three kinds of cancer – a result of Vietnam, she said. “Now, it’s just me and Chester running things,” she said. “I still help bail the hay, feed the cows. I’d rather do that than housework. I’m lucky.”