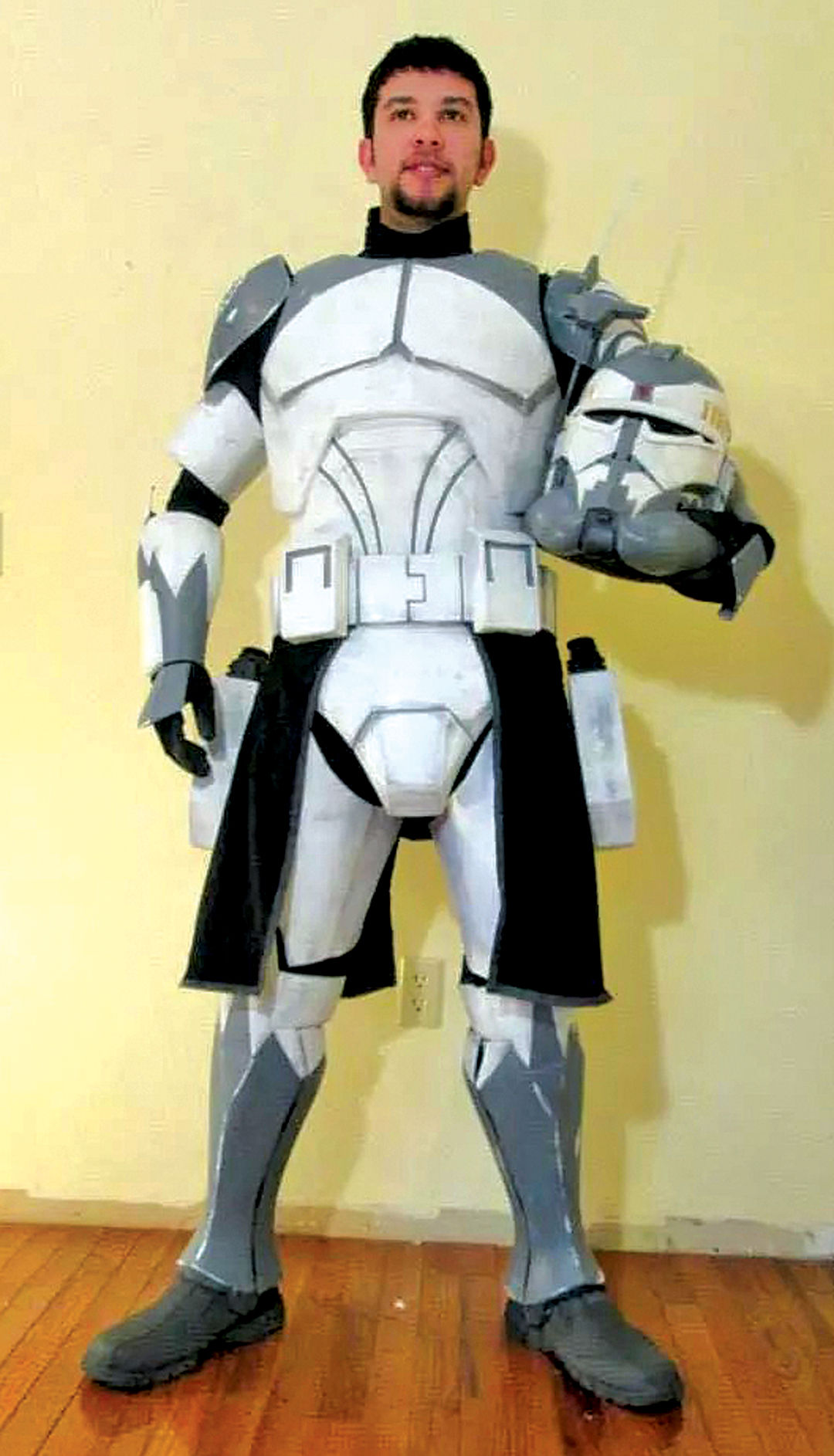 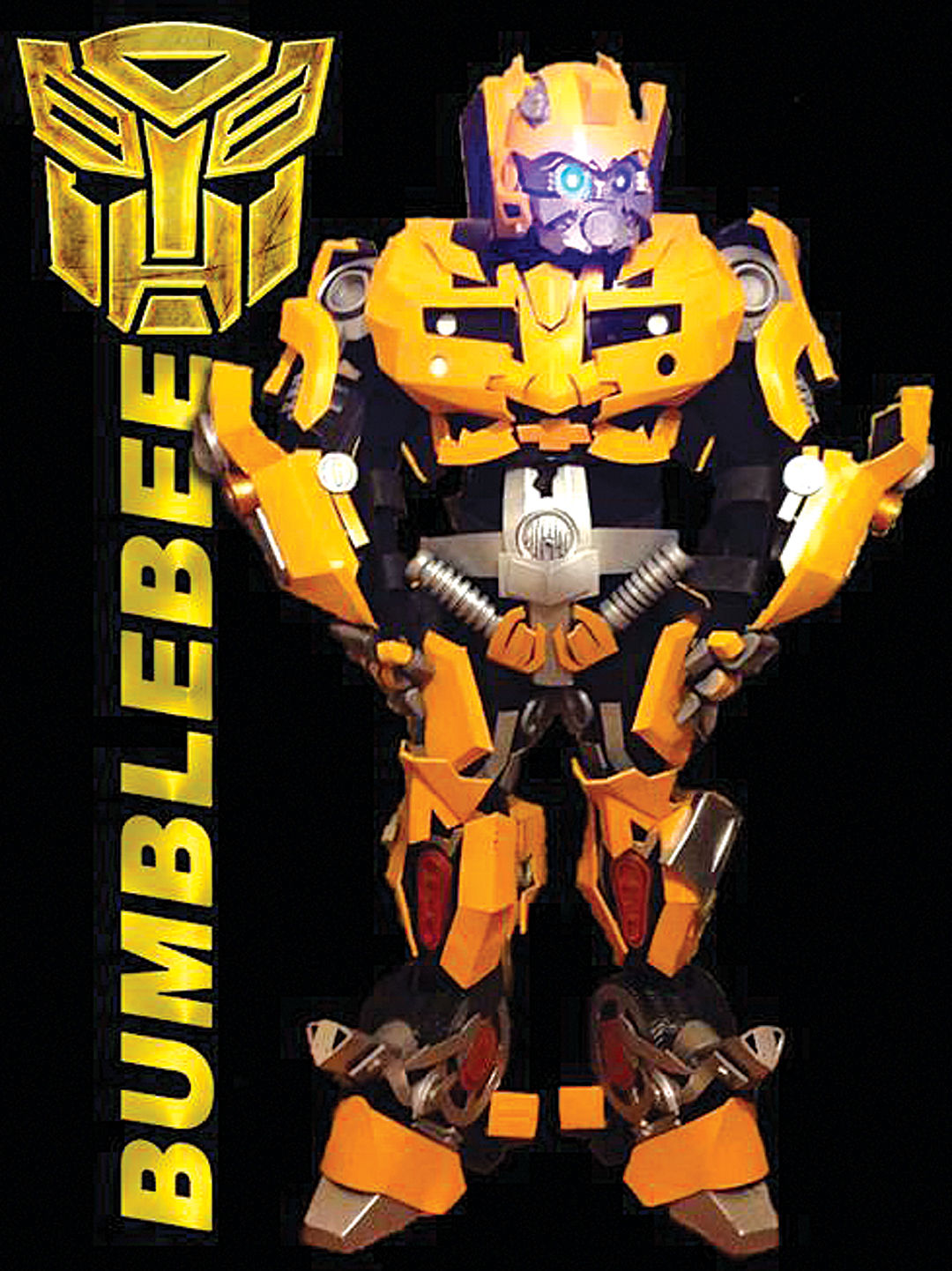 Zack McCollum became interested in cosplay in 2006, but he does it with a more hands-on approach. Cosplay is short for costume play and McCollum designs and builds his own costumes.

In fact, his costumes are better labeled as suits or props, since they look like ones that may be seen in a high-budget film.

“I first got into it because I was depressed and needed a hobby,” said McCollum. “But that has changed after seeing all of the kids’ faces. They think I’ve walked off the TV and smile. It makes it worth doing.”

McCollum said that he had a life-changing experience while in costume during a May 2011 event at Tahlequah High School. A local boy, Emmett Williams, had received his wish from the Make-A-Wish Foundation of going to Star Wars Jedi Training Academy at Disney’s Hollywood Studios, and his parents wanted to let him know in a special way. McCollum contacted friends and members of the 501st Legion and, along with the THS theater department, they hosted a Star Wars-themed sendoff.

“He wasn’t really smiling,” said McCollum. “But his reaction changed from OK to overexcited when he saw us. We did some skits and spent time with him.”

McCollum’s first costume was a black Shadow Trooper from the Star Wars franchise.

He followed that up with clone troopers Commander Cody and Commander Wolffe and is a member of the 501st Legion costuming organization.

This summer, he was chosen to compete at a Disney event where they were searching for theme park characters. He placed 33rd out of 171 contestants. Judges took costume accuracy and how much the costumer acted like their character into consideration.

Lately, McCollum has ventured away from the Star Wars realm. He has costumes for a zombie, green Power Ranger, and, his most recent, Bumblebee from the “Transformers” movies.

He will be at the Tahlequah Reasor’s video department on Friday, Oct. 3, to help promote “Transformers: Age of Extinction,” which came out on video this week.

Shane Perry, Reasor’s video manager, has been friends with McCollum, who also works at Reasor’s, for a long time. The two threw around the idea of using the Bumblebee suit at the store and everything has fallen into place for that to happen.

“I’ve only seen pictures of Zack in Bumblebee, but it looks ridiculously awesome,” said Perry.

“It takes skill to do what he does with making those costumes. He’s got the eye and mind for it.”

McCollum estimates that he has been working on Bumblebee for eight months. That time frame includes design, molding, building, and painting. Portions of the costume are foam and the rest is made of molded acrylonitrile butadiene styrene (ABS) plastic.

The mold was purchased from a friend in the Philippines. Once in shape, the pieces have to be painted. McCollum said that he uses spray paint and sometimes has to call on friends to help with the hand-painted details.

This Bumblebee, though, is just a prototype.

“I hurried to get it finished before the movie came out,” said McCollum.

“It’s not all the way finished, but it’s good enough. I hope to make one that actually transforms from a robot to a vehicle.”

Friday will be his Bumblebee’s first public appearance and he’s going to need some help. Inside the suit, McCollum stands at almost seven feet tall and has difficulty seeing, touching, and moving. He will have handlers assisting him while at Reasor’s.

His handlers will also have the title of bodyguards.

“Kids get excited and want to touch you,” said McCollum.

“It costs so much, I don’t want it to lead to damage. I have had costume suits damaged from people touching them. Sometimes it’s a quick fix, or I’ll have to build a whole new piece which can take hours.”

Children, and the young-at-heart, will be able to have their photo taken with Bumblebee, but with restrictions.

“We will have an area marked off and a spot marked with an X for them to stand on,” said Perry.

“There’s a huge following for ‘Transformers’ so we’re hoping for a lot of people. I hope Zack is still around when the next Star Wars movie comes out so he can do it then.”

McCollum has traveled all around the country for conventions and meeting friends with his interest in this level of cosplay. He wishes more people in this area did it.

“It’s lonely that I’m the only one in Tahlequah that does this,” he said. “If you go somewhere like Florida, you can find about a hundred guys in one town who do it.”

He’s hoping to use his unique hobby to assist in charity work and to help at local events.

In the past he has been at a Movies in the Park to help a friend raise money for the Alzheimer’s Association and is currently brainstorming about how he could benefit other local organizations.

“People sometimes get scared when they see me, if they are unfamiliar with the character,” said McCollum.