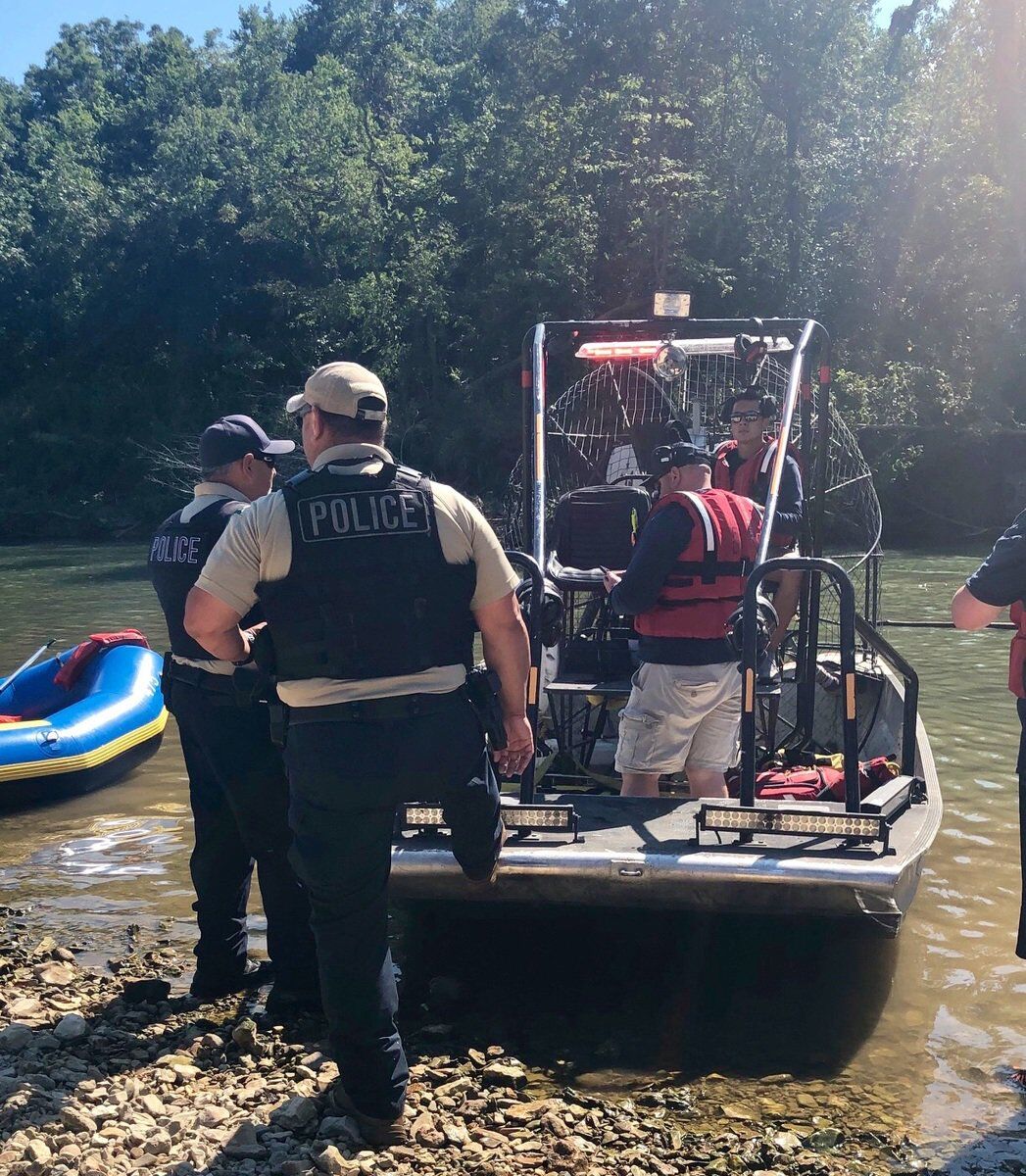 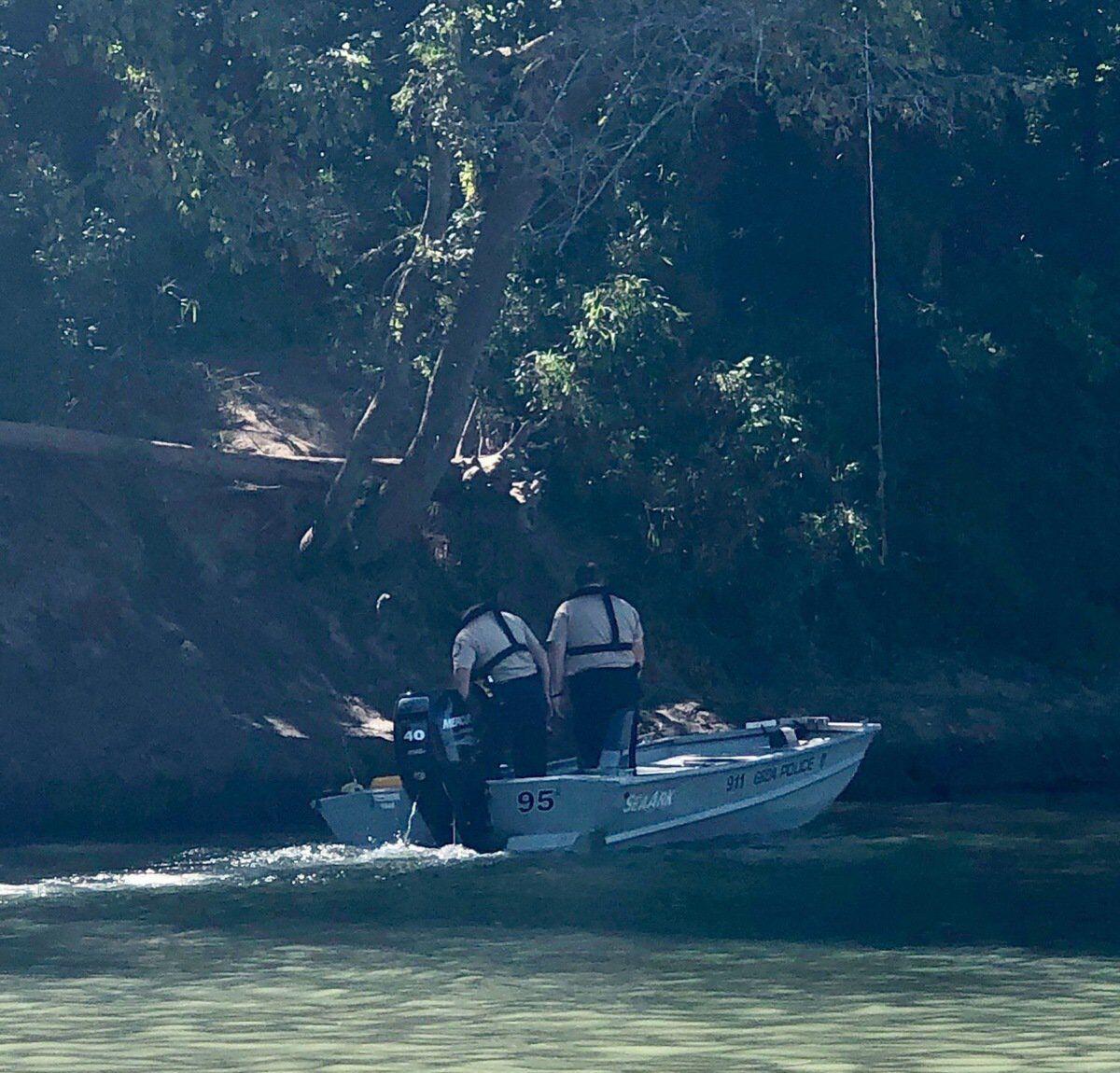 GRDA Police search the Illinois River for any signs of a man who was reported missing over the weekend. 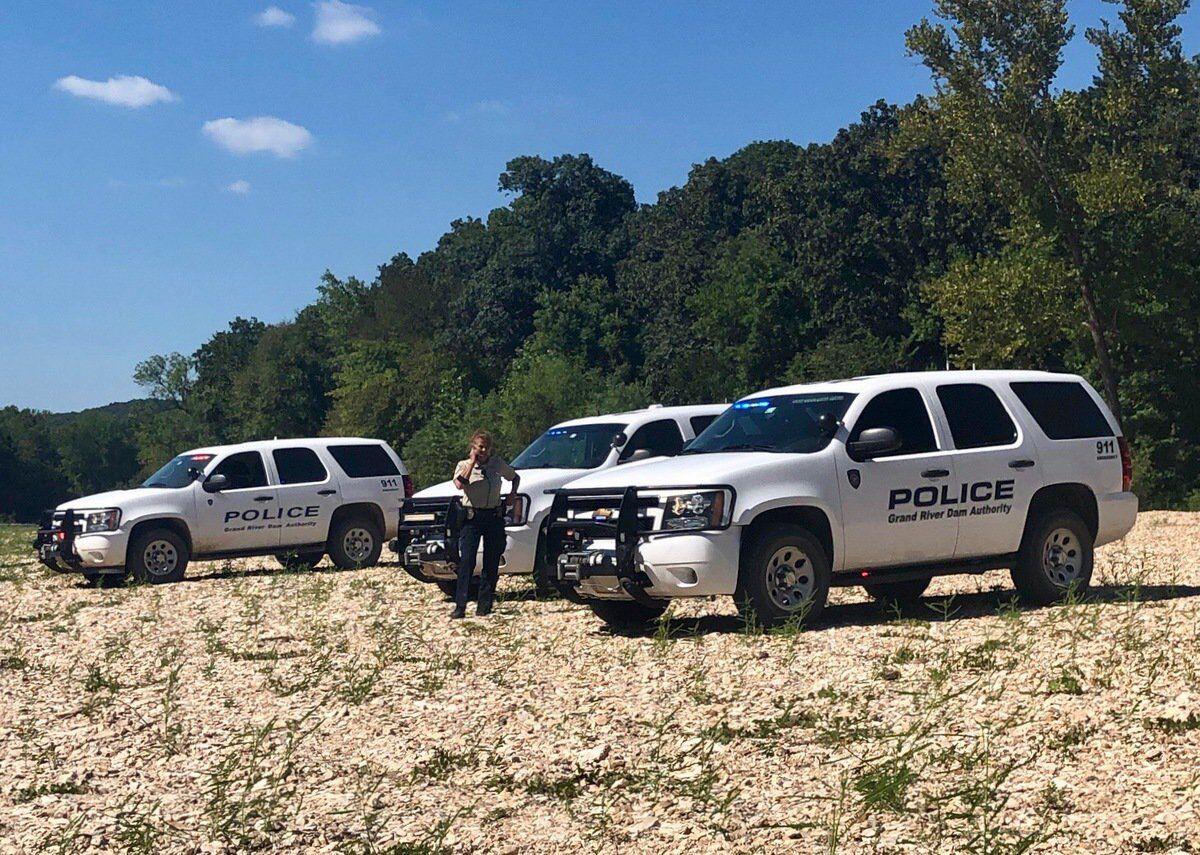 Grand River Dam Authority Police parked on the bank in the immediate area a man was reporting missing after jumping into the river from a rope swing.

GRDA Police search the Illinois River for any signs of a man who was reported missing over the weekend.

Grand River Dam Authority Police parked on the bank in the immediate area a man was reporting missing after jumping into the river from a rope swing.

He's also the lead pilot for the IRVFD's airboat, which travels up and down the river, especially during weekends.

Grand River Dam Authority will typically monitor the highly populated areas where officers can watch for underage drinking or fighting, or spot anyone who may be in distress.

“We do all of the rescues, from medical to drowning and transporting people back and forth,” Tune said. “Now that the water level is really low, we help out GRDA with all of those tasks. So if they have people arrested from a fight, we’ll transport two at time with an officer on board.”

The airboat has the capability to travel through low-level water. Tune said even if there’s a gravel bar — an elevated region of sediment — the airboat can still make it through.

“I prefer to be in low water levels. Say we’re standing in the water and it goes above my knees, I don’t want to be in it,” Tune said. “I’d rather be where it’s barely covering your feet, and it’s more fuel-efficient that way.”

Tune said it’s a quick process from the time a call comes in to getting the boat into the water, but it also depends on the urgency of the call.

“So most of our calls happen around the Eagle Bluff area or up north, and I’d say it takes us less than five minutes. I’ve seen it be done in two minutes,” Tune said. “We get there and we have enough people already there, and it’s just having someone back in. Then the pilot does a check around the boat to make sure the plugs are in, everything’s ready to go, and it only takes a few seconds to throw on a life jacket. That’s the perfect time for them to back the boat into the water.”

On Saturday, Aug. 22, IRFD responded to several calls that included traumatic injuries, a medical assist, and a possible drowning.

Shortly before 4 p.m., dispatch notified IRFD, GRDA, and Oaks Fire Department that a man who jumped into the water from a rope swing, and hadn’t resurfaced for about 10 minutes.

IRFD firefighters were refueling the airboat when dispatch radioed the call, and volunteers got the vessel in the water in less than eight minutes. GRDA Police were on scene in their boat as well, as keeping the crowd of floaters under control and out of the water.

Family members and friends of the man were filling out statements and answering questions as first responders searched the immediate area.

A short time later, dispatch advised that the man had been found at War Eagle, about a mile down the river. IRFD quickly headed that way and were met by a group of floaters, who said the man they were looking for had gotten onto their raft.

The man didn’t appear to be distressed and admitted he didn’t even realize first responders were looking for him. He refused medical treatment.

IRFD Chief Stephen Alyea said one of the first tasks first responders do in that situation is go straight to the missing floater’s destination.

“Majority of the time, that person somehow gets separated from their group, and you’ll find them either at their campsite or back at the resort,” Alyea said.

“This Rural Development investment will be used in combination with a FY 2019 Community Facilities grant of $50,000 to complete an expansion project of the Illinois River Area Volunteer Fire Department's present facility,” Alyea said. “The expansion project entails the addition of 1,200 square feet in red iron frame construction.”

Alyea said the additional square footage will be used to construct two bays to provide a drive-thru structure.

“They'll have room for inside storage of their longer and larger-capacity water truck, and storage for their rescue airboat. The drive-thru structure will allow for the rescue airboat to stay connected — at all times — to a tow apparatus,” Alyea said.

TAHLEQUAH [mdash] Dr. Donn R. Turner, beloved physician, husband, father, and grandfather, died Saturday, January 23rd, due to complications from surgery at 73 years old. He was preceded in death by his father, Donn William, and his mother, Oddie. He is survived by his wife, Sue Turner, his …