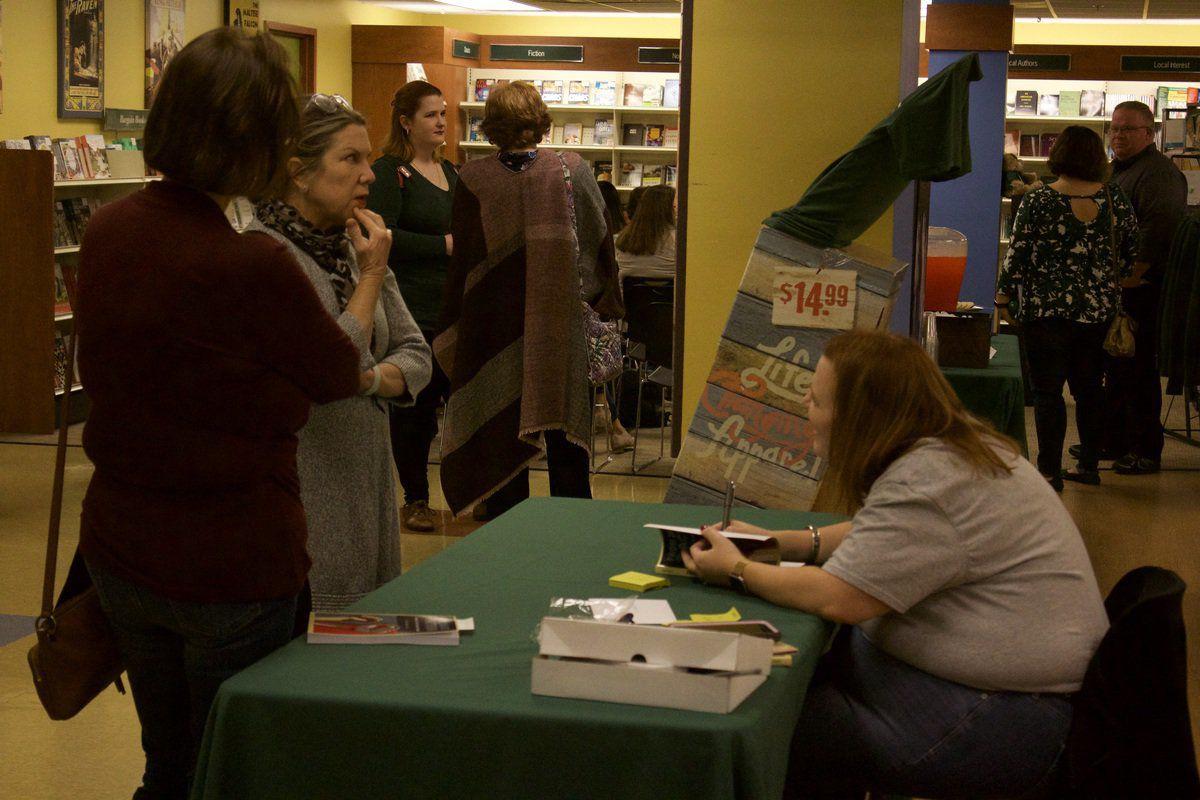 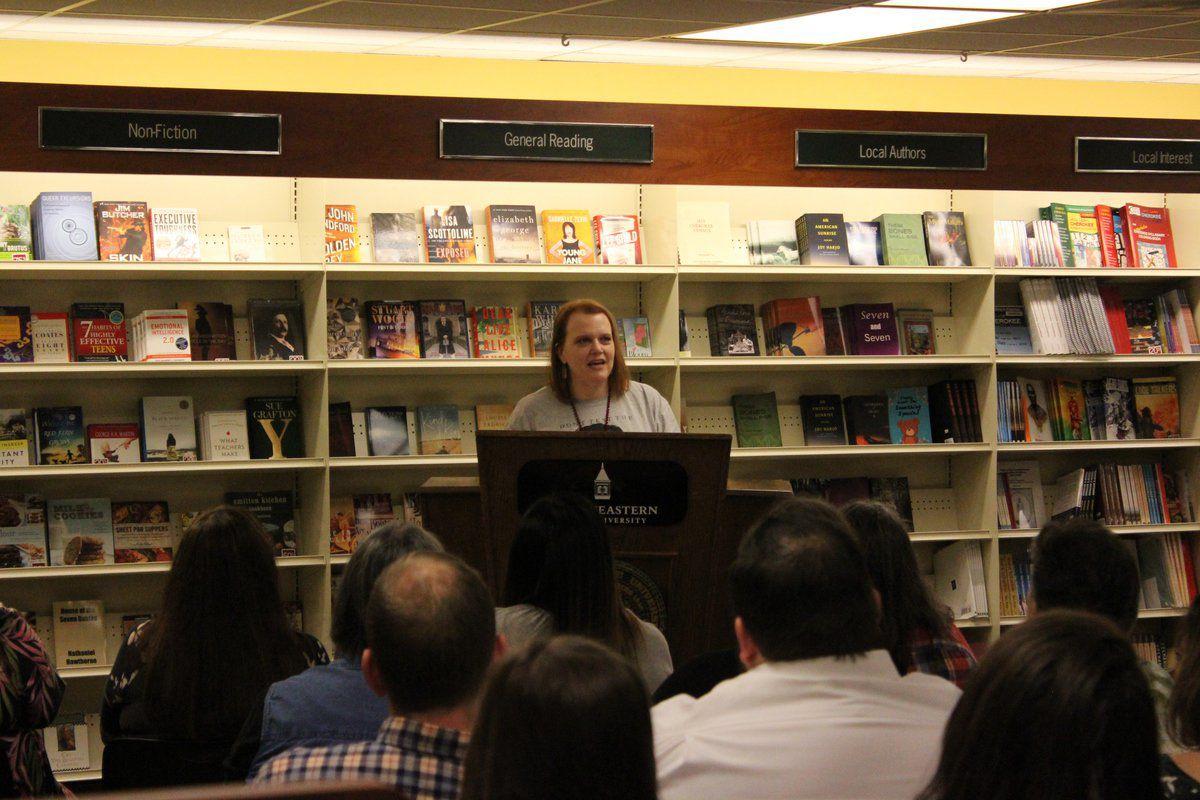 Dr. Amy Aldridge Sanford, former Northeastern State University assistant professor and chair of the department of communication and media studies, reads from her book, "From Thought to Action: Developing a Social Justice Orientation," Tuesday morning at the RiverHawk Shoppe.

Dr. Amy Aldridge Sanford, former Northeastern State University assistant professor and chair of the department of communication and media studies, reads from her book, "From Thought to Action: Developing a Social Justice Orientation," Tuesday morning at the RiverHawk Shoppe.

When Dr. Amy Aldridge Sanford was 15, she went to speak at an FHA conference at Cameron High School. She attended with a classmate whose parents drove them to Cameron.

After the group arrived back home in Warner, the house Sanford lived in was vacant. Her friends drove her around the four blocks of Warner until they found where her family had moved.

"I grew up in poverty, and my parents would move us three or four times a year, she said. "They were always looking for cheaper rent. I grew up on public assistance."

Today, Sanford is the associate provost at Texas A&M University-Corpus Christi, where she oversees catalog and curriculum, international education, faculty professional development, and academic services for student-athletes, and acts as the university's academic liaison to the Texas A&M System and the Texas Higher Education Coordinating Board. Prior to being associate provost, she served three years as associate vice president for Academic Affairs and six years as a department chair in Texas and Oklahoma.

As a first-generation college student, she received her bachelor's degree in communication education and her master's degree in school administration from Northeastern State University.

After attending the University of Iowa for a second master's degree and a Ph.D. in communication, Amy returned to NSU in 2004 and taught for nine years. She was named Communication University Educator of the Year in 2008 in Oklahoma, then in 2018 in Texas. Sanford is a Lifetime Member of the NSU Alumni Association and is a proud graduate of Warner High School.

Former student and NSU Assistant Professor of Communication Elaina Ross introduced Sanford to nearly 50 people who came to hear her read from her book, "From Thought to Action: Developing a Social Justice Orientation," at the RiverHawk Shoppe on the NSU campus Tuesday.

"At the end of my very first class with Amy, she said something to the effect, 'When you are in with me, you are in for life.' At that time, I thought, 'oh, what a nice idea,' but it turns out she really meant it," said Ross.

Sanford refers to her students as "forever students," and one of the book's dedications is to them.

"She has maintained relationships with friends and students, continuing to guide and nurture us in a way that really proves that she meant her lifelong membership," said Ross.

Sanford was in town for a booking reading and signing at her alma mater.

She told the crowd it took five years to write the book, and that NSU was the appropriate place to hold her first reading.

She said in the preface of her book, she has wanted to give this information to her students for more than a decade.

"My university teaching career is dedicated to preparing and teaching social justice-oriented courses in conservative regions of the United States, and as a result, I have watched students struggle as they try to find their way to a 'woke' status regarding the marginalized and disenfranchised," Sanford wrote in her book.

Sanford was born in the mid-1970s. In her book, she describes her parents as racists.

"They moved me 30 miles south from the city of my birth [Muskogee], a diverse city of 40,000, to a homogeneous town of 1,200 to ensure that I did not attend middle school with nonwhites," Sanford said in her book. "As a preteen and teen, I continuously corrected my parents' racist speech and fought for the right to date outside my race."

She said her parents did raise her to speak her mind, though.

"When I argued with them, I felt heard and respected, " she writes.

She said her parents allowed her to join clubs and take dance lessons, and her love of communication and public speaking took hold. She began competing in speech and debate and made her way to NSU to study communication education. She stayed and received a master's degree before moving out of state for the first time to work and earn another master's and a Ph.D from the University of Iowa.

While at Iowa, Sanford learned that her longtime friend and college roommate was gay.

"We both had Southern Baptist upbringing. I started quoting Bible verses and told him he was a sinner," she said. "We soon lost contact."

Her journey to Social Justice Orientation began after she returned to NSU to teach.

"I started reading. I educated myself on history and minority experiences," Sanford quoted from her book.

"During my nine years at NSU, I taught and developed many consciousness-raising courses. I like to think that my undergraduate self would have taken those classes and reached full social justice consciousness before graduate school."

After many apologies on her part, and much guilt for missing out on her friend's life for more than 13 years, the two are slowly building a relationship.

Her reading ended with her signing books and visiting with her "forever students" and former colleagues and friends.

She asked the audience members to look at how they are living life.

"If you are preaching it, you better be living it," she said.