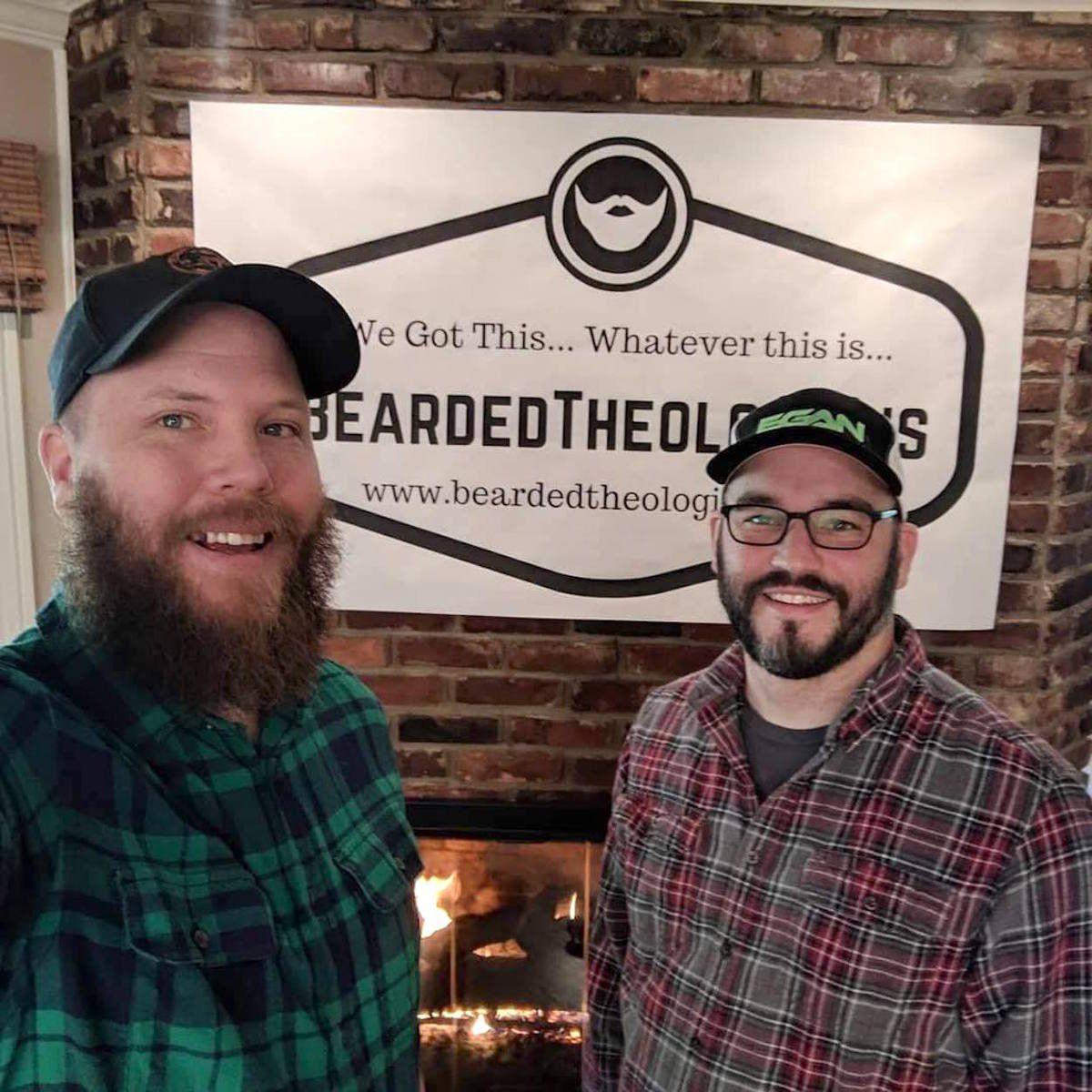 The Bearded Theologians podcast was started four years ago by the Revs. Zach Bechtold, left, and Matt Franks. Franks, lead pastor at Tahlequah First United Methodist Church has a much longer beard these days. 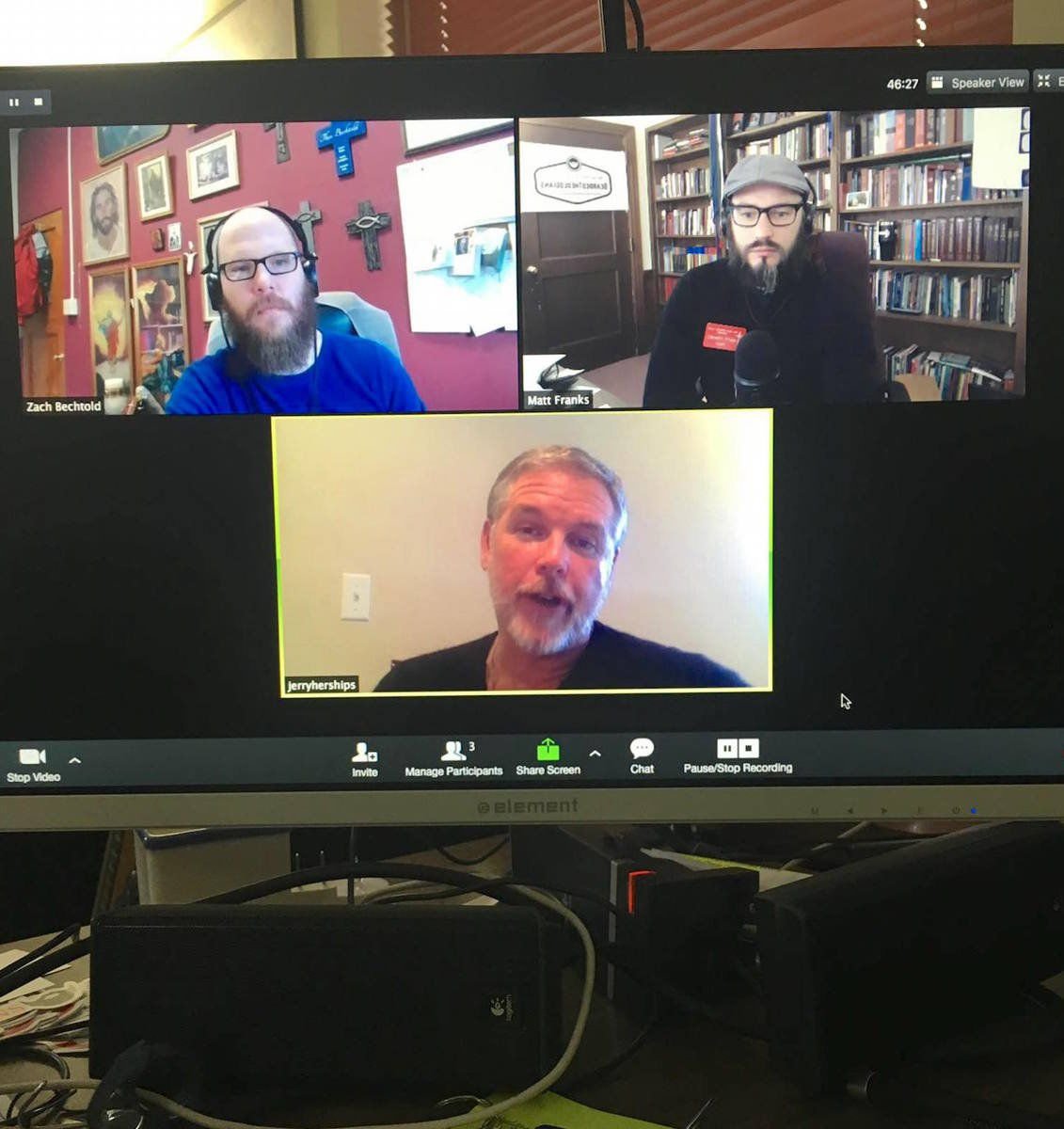 The Bearded Theologians podcast was started four years ago by the Revs. Zach Bechtold, left, and Matt Franks. Franks, lead pastor at Tahlequah First United Methodist Church has a much longer beard these days.

A Tahlequah pastor has found avenues to have theological discussions and times of prayer outside of the ordinary church service.

Rev. Matt Franks, lead pastor at Tahlequah First United Methodist Church, is co-host of the Bearded Theologians podcast, and has begun a Bar Church and more in town.

"The idea is to provide community and faith in spaces not necessarily in the church building," he said. "Church attendance is down across the board; it's not a denomination thing. It would be great if they all showed up on Sunday, but it's about connecting with a pastor. They know they'll have someone to reach out to."

Franks is in his fourth year of recording Bearded Theologians with friend and fellow pastor Zach Bechtold. He said some locals looked up the podcast when he first came to Tahlequah over two years ago.

"To some people, it was a good introduction to me," he said. "It's fun to go places and hear people say they listen to you."

Bearded Theologians is available as a podcast and as video segments. Franks said the video option lets "listeners" see interactions and facial expressions, as well as the authors or guests who are on the show.

"It's become spiritual practice with us. Sometimes we'll talk about a Scripture we'll preach on Sunday, or one we should have preached about," said Franks. "It's a blast. We love doing it."

Most of the podcasts are recorded in one take. Others have been edited due to technical issues or interviews have been made into more than one episode.

"With guests, they can be 45 minutes to an hour. We want them to have enough time," he said. "We make it like a genuine conversation."

Guests have included UMC bishops, authors, Christian activists, and people from all walks of life.

"Last year, we turned it over to a group of women and they shared their experiences of ministry. It was really cool. I enjoyed that," said Franks.

"It's like a Methodist Netflix. It was a fun learning experience to see how it's done professionally," said Franks. "We hope to go back in the spring and do more video."

Other ways Franks reaches out to the community while off the pulpit is by having meetups at coffee shops or bars.

Since he has been at Tahlequah FUMC, the casual or contemporary church idea has evolved. A Dirt Church service was set up and changed to Open Door Worship.

"It ebbed and flowed so much it was hard to sustain. I decided it was time to try the Bar Church," said Franks. "Now we meet where they're at. We strive to build a community to grow their faith and grow closer to Jesus."

This type of creative thinking stems out of the Fresh Expressions movement. According to freshexpressionsus.org, this form of church is for the changing culture, "established primarily for the benefit of those who are not yet part of any church."

"We want to promote inclusion. It's a great space to have a conversation and a pint," said Franks. "It's not about just preaching to people, but having a conversation."

Franks said he learned a lot eight years ago from his Colorado friend Jerry Herships.

Bar+ Church now has a group of pastors doing it across the country.

"We have a network of pastors and we share stuff, like what's working or not. It's good support to have and nice to connect together," said Franks.

He said that he and other local UMC leaders do pay attention to how much alcohol attendees are consuming, and people should drink in moderation.

"We're not promoting drinking; we're promoting community," he said. "Some people go to bars and don't drink alcohol. We encourage them to tip well and be responsible."

Only a couple of Bar Church meetups have happened so far in Tahlequah.

"The first night, we had three people from the bar join us, so we're reaching other people. We get outside the walls of the church and reach other people we couldn't otherwise," said Keith Barrick, FUMC lay leader. "If it would bring more people to church, I'm all for it. In the church, all we have to listen to is the preacher. This is a conversation."

Since Bar Church is the last Wednesday of the month, February's will be canceled due to Ash Wednesday.

One thing Franks does differently than some other pastors in the Bar Church scene is offer morning prayer at a coffee shop.

"It's an intimate gathering. It's a time of prayer and to pray for one another," he said. "It's a good way to start the day."

The morning prayer group will meet Monday, Feb. 24, at 8:30 a.m. at Lift Coffee Bar. Franks said he likes to keep it to 30 minutes because people usually have to get to work.

"There's something powerful in these moments and it's something Sunday morning church doesn't do. Sometimes they need to see it can be done differently," said Franks.