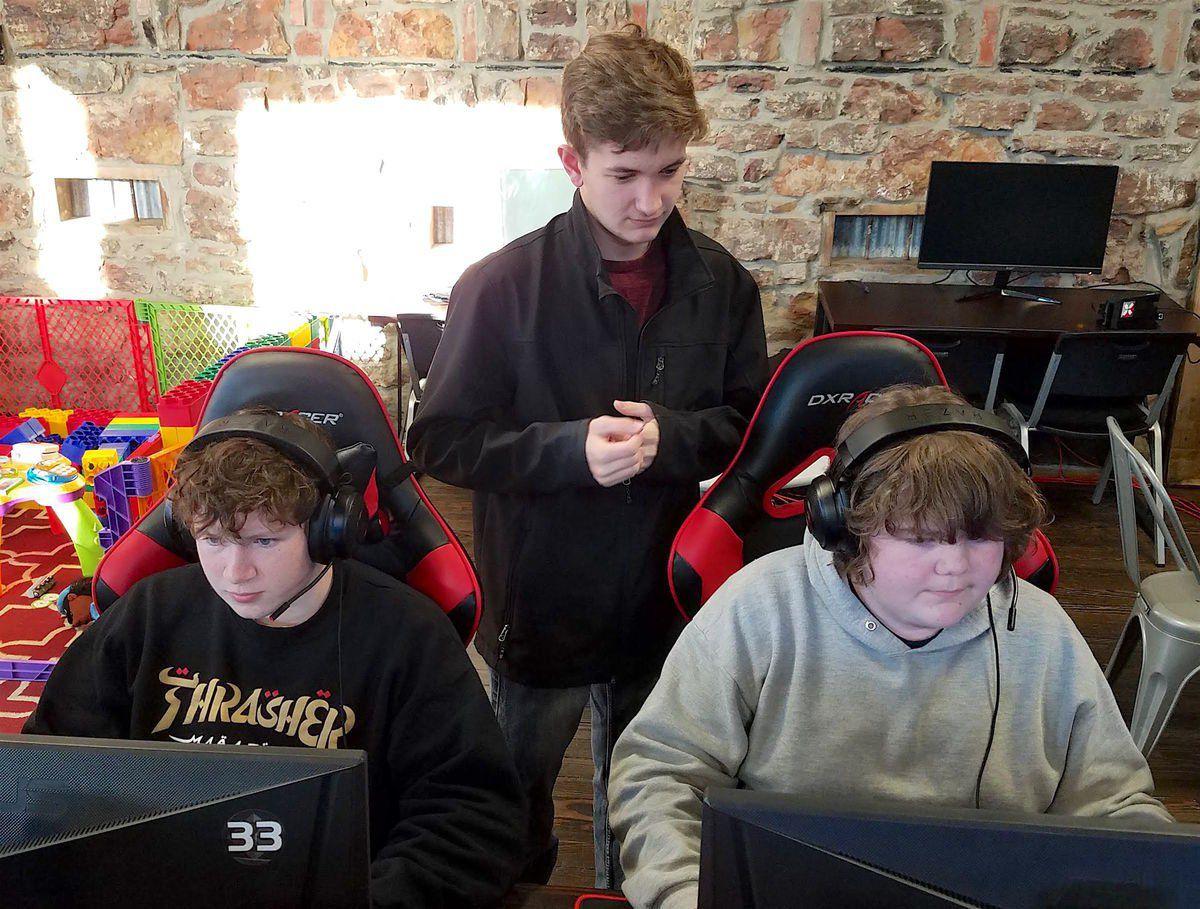 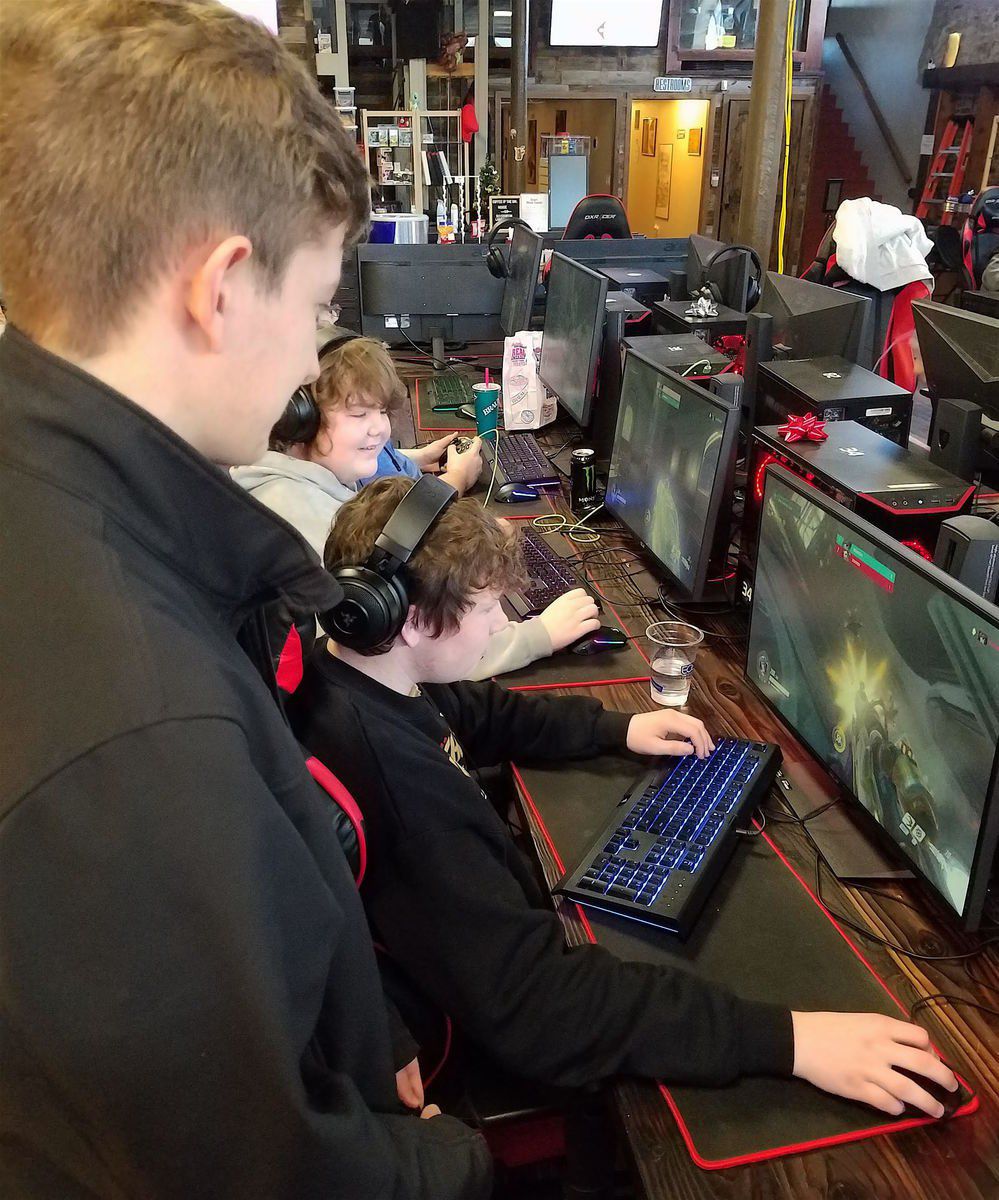 Members of the Tahlequah High School "Overwatch" esports team get together over the holiday break at Start. Team captain Payton Smith, standing, watches as Jorryn Rider, back, and Ty Brant play.

Members of the Tahlequah High School "Overwatch" esports team get together over the holiday break at Start. Team captain Payton Smith, standing, watches as Jorryn Rider, back, and Ty Brant play.

Esports teams were formed at some area schools this year, and a couple of them are making a mark in Oklahoma's competitive video gaming world.

The Oklahoma eSports League is in its first year, and about 30 high schools are competing under it.

Steve Hamby serves as the facility advisor for the group, and coaches the "League of Legends" players.

"I try to coach Hulbert when they come in, and I'm helping Muskogee," said Meeker. "We're trying to get Keys and Stilwell going, too."

He said that he started playing in high school when competitive gaming was getting big.

"It's a stress reliever, and teaches hand-eye coordination," he said. "It's good for them to have another outlet instead of going out and getting in trouble."

Start owner Adrien Nong was instrumental in getting teams started in the area, and he is on the Oklahoma eSports League board.

"It's so huge right now, and it's getting bigger every day," said Nong, who moved to the U.S. while in middle school.

"The best thing about it is giving kids these opportunities. They want something to be included in. Esports is one of the most inclusive - you can have disabilities; gender doesn't matter; age doesn't matter."

While there are only two females on the THS teams this year, online game play is about equally split between males and females.

"A lot of people think video games are just for boys, but a lot of girls play too," said Meeker. "Most girls are better than the guys."

THS players tried out in the fall, and some of the students had never played the games available.

All but "Super Smash Brothers" is played on personal computers. SSB is on Nintendo Switch.

"I was in the first group of people to get to try it together," said junior Ty Brant. "I didn't really know much about the game, but I tried out and made the team."

Many of the players didn't know each other before trying out, but now they're "like a giant family," according to freshman Jorryn Rider.

Meekers said everyone has enjoyed it so far.

"I think it's cool they've all become friends and treat it as a family, because it takes communication and cooperation," he said. "They're a really strong team."

Ty said the biggest challenge at the beginning of the season was everyone getting used to playing together.

"When we first started, we did our own thing. Now, we're used to playing together," said Ty, who said he benefits from being able to work with others.

Sophomore Payton Smith is the current team captain, even though he hadn't played "Overwatch" until he tried out.

"It's fun when we get into a game where we all know what we're doing," said Payton.

Meeker said he chose Payton as captain because of his communication skills.

"Payton was the one who was able to take control of situations. He wasn't shy at all," said Meeker.

The THS team practices after school two to four times a week, and many players game at home.

Ty said that he has put money into his home computer so he can play there. He also got a new gaming chair for Christmas.

"Ever since I've been able to make the team, my mom has been more lenient on me playing," said Ty, who was on the THS academic team the previous two years.

Jorryn said he has decided to do esports as a career.

"I thought it was a waste of time before. It helps me focus," said Jorryn. "Grandma focuses on prioritizing [concert and marching] band. Now I'm in two things that I could get scholarships for."

Meeker reminds them that there are a lot of avenues in the field, from programming to coding to playing professional esports.

Nong said the community has given a good response to the teams, especially when they hear about the THS Overwatch team being ranked in the top five in the state.

Donations have come in so the players have jerseys, and they are looking to get the students jackets, and to have a transportation fund to travel for competitions, such as the upcoming semi-finals.

Also in the works is having it set up so people can go to Start to watch the teams plays or have games streamed online.

"It's important, especially for family, to see they're not just playing a video game; they're competing by working together," said Nong. "It's a lot of fun to watch them doing games and practices."

The coaches out of Start also treat esports like a traditional sport.

"We run a lot of analytics. It's like in football where you review tapes. We review plays and help with minor skills and strategy," said Nong.

He's also talking with a local chiropractor to assist players with warm-up exercises and proper posture.

He said that before chiropractors were a part of esports, gamers were retiring before the age of 30.

"Exercise is important. Sitting eight hours practicing can take a toll on you. Posture is a big deal in gaming," said Nong. "We're trying to be mindful and make sure kids have opportunities."

He said the biggest challenges he faces are people having the stigma about video games, and for school administrators and parents accepting esports.

"Home playing and competitive playing are completely different," said Nong. "It's safer to play in this kind of environment that at home. There's more of a support system, and playing with other people is helpful."