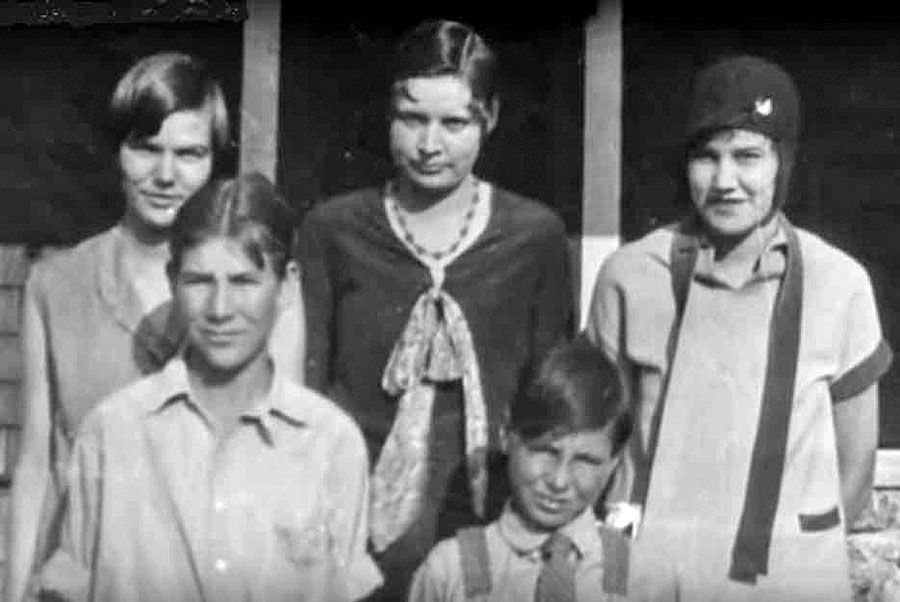 The children of William W. and Mary Moore Ross around 1926 were, top row from left: Frances Curtis, Mary Golda, and Billy Ross. Bottom row: Charles A., and Robert B. 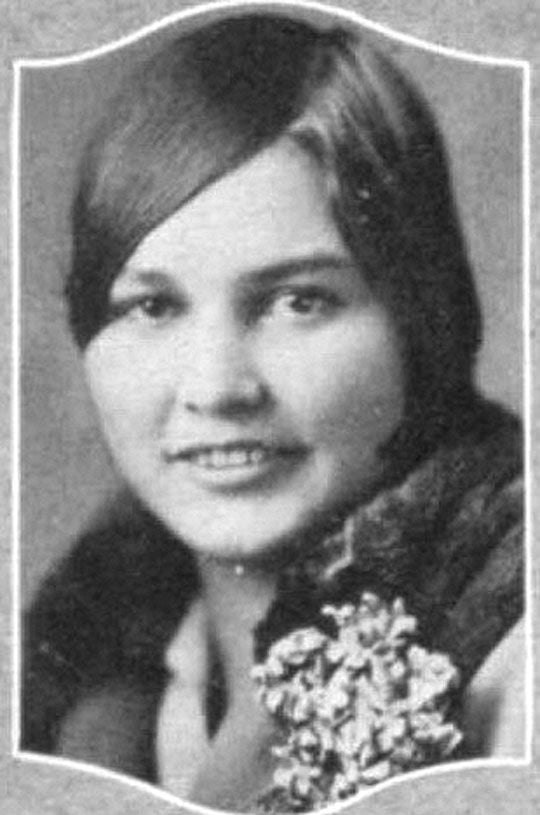 The 1928 “Tsa La Gi” Yearbook shows Mary Gold Ross during the year she graduated from Northeastern State Teachers College with an A.B. degree in mathematics. 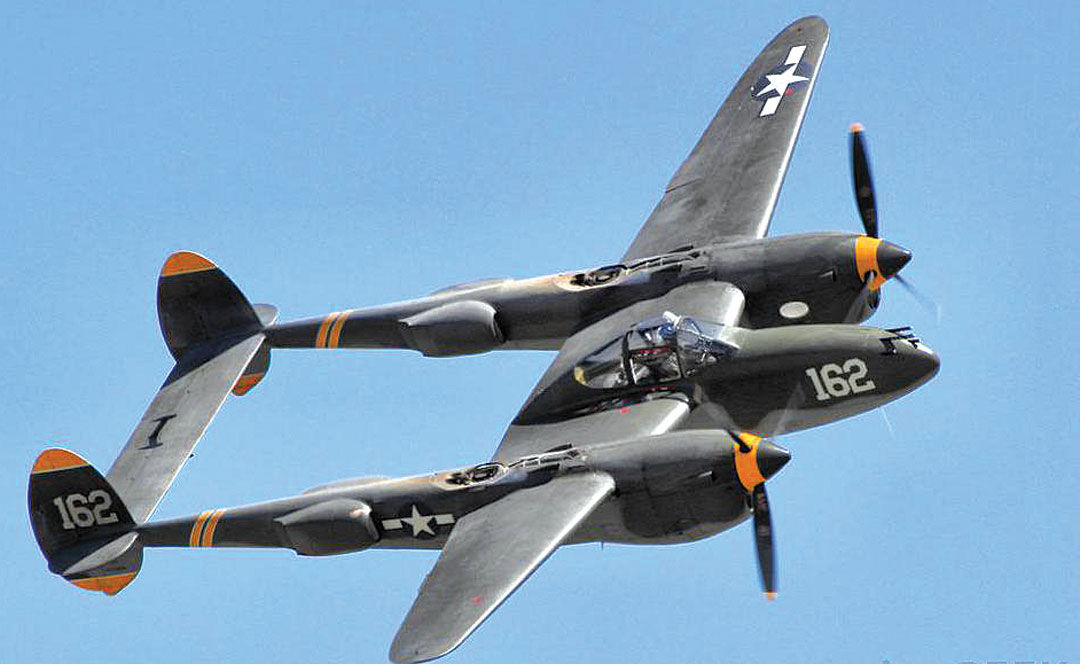 The P-38 Lightning fighter aircraft initially had design flaws which Mary Ross, as she was known by her colleagues at Lockheed, helped correct after she began work as a mathematician for the aircraft company in 1942. 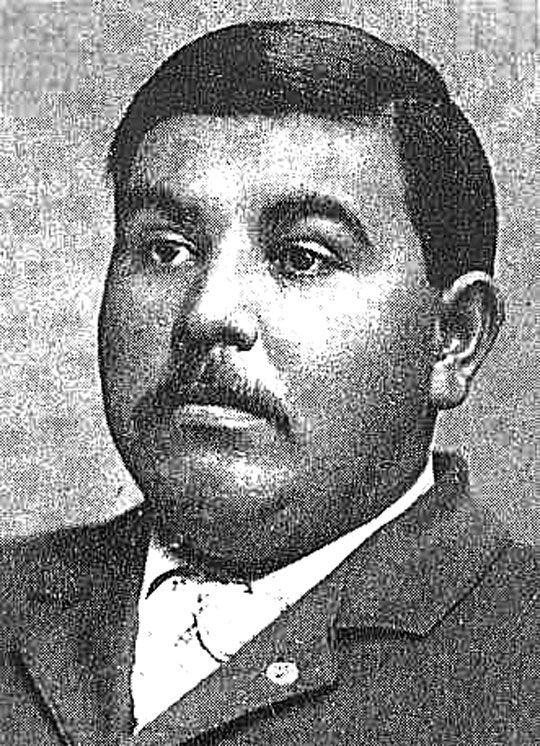 This photograph of William Wallace Ross, father of Mary Golda Ross, was taken about the time he graduated from the Cherokee National Male Seminary in 1890. 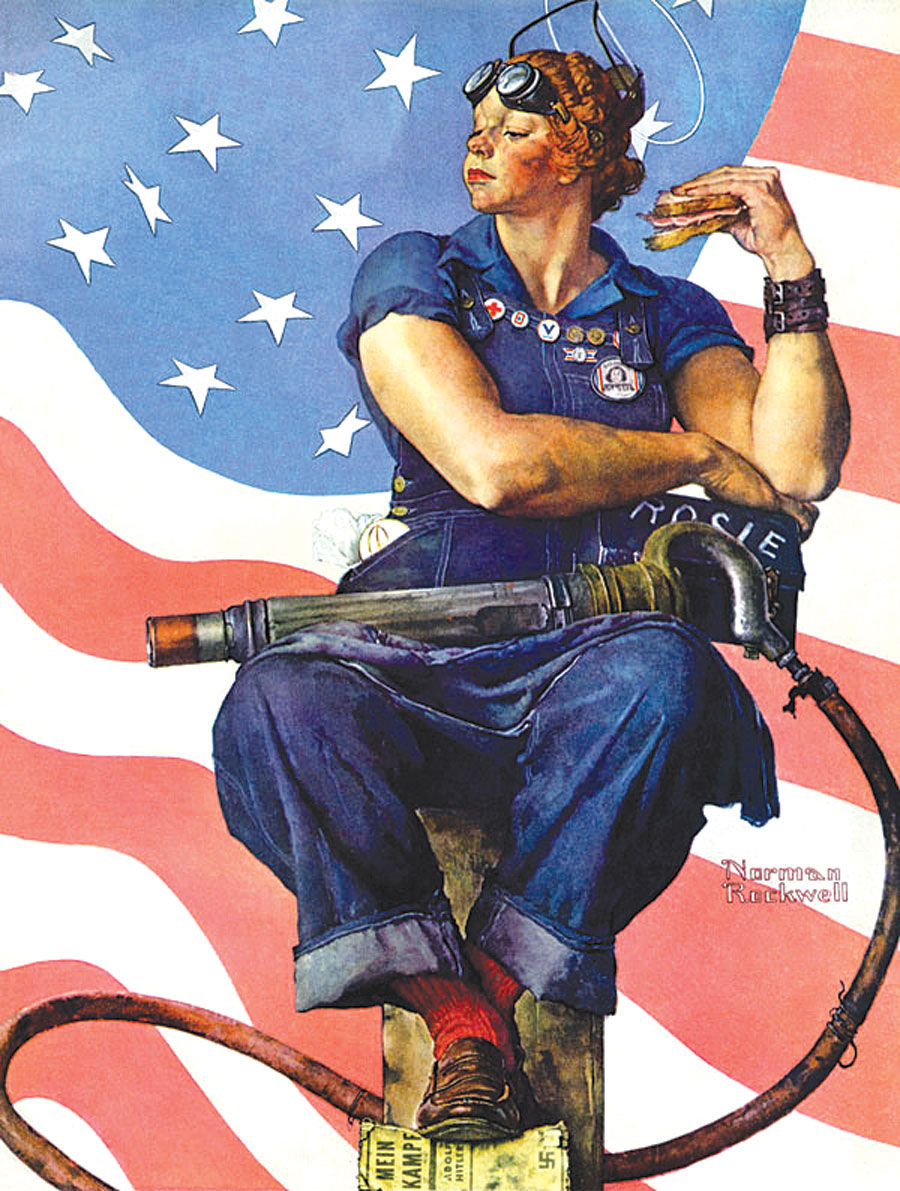 Norman Rockwell’s illustration of Rosie the Riveter, the symbol of women who filled in for male workers serving in the military in World War II, does not suggest that some women, like Cherokee Mary Golda Ross, contributed to the design of weapons as well as their production.

The children of William W. and Mary Moore Ross around 1926 were, top row from left: Frances Curtis, Mary Golda, and Billy Ross. Bottom row: Charles A., and Robert B.

The 1928 “Tsa La Gi” Yearbook shows Mary Gold Ross during the year she graduated from Northeastern State Teachers College with an A.B. degree in mathematics.

The P-38 Lightning fighter aircraft initially had design flaws which Mary Ross, as she was known by her colleagues at Lockheed, helped correct after she began work as a mathematician for the aircraft company in 1942.

This photograph of William Wallace Ross, father of Mary Golda Ross, was taken about the time he graduated from the Cherokee National Male Seminary in 1890.

Norman Rockwell’s illustration of Rosie the Riveter, the symbol of women who filled in for male workers serving in the military in World War II, does not suggest that some women, like Cherokee Mary Golda Ross, contributed to the design of weapons as well as their production.

Wikipedia defines Rosie the Riveter as “a cultural icon of the United States, representing the American women who worked in factories and shipyards during World War II.”

Most illustrations of Rosie picture her producing military equipment, assembling munitions, or riveting ships or aircraft.

These representations are accurate but incomplete.

With most able-bodied young men in the military, women took their places not only on the assembly lines, but also in other positions as well.

Oklahoma historian Angie Debo became pastor of the Methodist church in her hometown. Female pilots ferried military aircraft throughout the United States and even trained servicemen to fly.

A Park Hill native, Mary Golda Ross, abandoned her career in education to support the war effort and proved so valuable in contributing to aircraft design that, unlike most Rosie the Riveters, she was retained by the company that hired her after the war ended and servicemen reentered the civilian workforce.

Ross’s career, launched during World War II and continued in the Cold War’s space race, was considered unusual for a woman and for a Native American, but given her family history and Cherokee traditions, it should not have been surprising.

“Gold” Ross, as she was known locally, was the second of five children of William Wallace and Mary Henrietta Moore Ross. Both were listed on the Dawes Roll as Cherokee by blood – he five-eighths and she one-thirty-seconds.

William, who was 37 when Gold was born on Aug. 9, 1908, was the great-grandson of John Ross, who had led the Cherokees as principal chief from 1828 until his death in 1866. The tribe had a long tradition of promoting education as the most effective means of equipping its members to protect their interests in their dealings with their white neighbors.

Chief Ross, in particular, had been instrumental in establishing two seminaries in the Cherokee Nation for male and female students a little more than a decade following the tribe’s force removal to Indian Territory in the late 1830s.

In their matriarchal society, Cherokee women historically had played a larger role in the affairs of their nation than their counterparts in the white culture. The female seminary established in 1851 at Park Hill offered a curriculum as demanding as the one confronting the boys at the male seminary in Tahlequah.

These two schools produced several generations of tribal leaders with educational foundations equal to, if not better, than whites schooled in the surrounding states. Gold’s father was a graduate of the male seminary in the class of 1890. Fifteen years later, he married Mary Moore in a ceremony at the antebellum home of George and Minerva Murrell at Park Hill.

Ross farmed, served as deputy sheriff of the Tahlequah District, and participated in the political affairs of the Cherokee Nation during its final years, serving in its last legislature. He was the Park Hill agent of the Frisco Railroad, but in 1920, moved his family to Stilwell in Adair County, where he held several county offices.

The family valued learning, and the Ross children all began their education at Owen School near Park Hill, constructed in 1913 on land their mother donated from her allotment. Later, Gold was sent to live with her grandparents in Tahlequah where the public schools benefited from the presence of a state normal school.

Details about Mary Golda Ross’s early years are scanty, but the Stilwell Standard-Sentinel reported that she presented a Scripture reading from 1 Corinthians at the Sunday evening meeting of the Epworth League at the Stilwell Methodist Church on Dec. 17, 1922.

A promising student, she completed high school at the age of 16. In the fall of 1924, Ross enrolled at Northeastern, which had been elevated to the status of a state teachers’ college and had granted its first bachelor’s degrees just three years earlier.

Like many beginning students, the freshman coed was unfamiliar with collegiate terminology. During enrollment, when asked to declare her major, she was puzzled. The person assisting her register rephrased the question by inquiring what her favorite subject was in high school. When Ross responded, “math,” she was designated a mathematics major.

With a total enrollment of 835 students for the fall and spring semesters of the 1924-25 school year, Northeastern’s entire mathematics department was Professor L.P. Woods for the four years Ross attended the Tahlequah college. Her relations with him were apparently good, for she indicated that she felt free to contact him after class when struggling with a mathematical concept.

Considered one of the more difficult majors, math was usually avoided by coeds. Ross was apparently grudgingly tolerated by the male members of her classes. She recalled, “I was the only female in my class. I sat on one side of the room and the guys on the other side of the room. I guess they didn’t want to associate with me. But I could hold my own with them, and sometimes did better.”

While at Northeastern, a member of Alpha Alpha, the college’s oldest social sorority, she was known as “Gold” and helped it win the first Scholarship Cup awarded by the school. Her A.B. degree was conferred in a morning ceremony on July 19, 1928, at the end of the summer term.

All Northeastern degrees in this period prepared graduates to teach, and for the next nine years Miss Ross instructed math and science in public schools in northern Oklahoma.

The 1930 census listed her in Osage Town, a community of some 600 in southern Osage County, about 40 miles northwest of Tulsa.

She was one of five female public school teachers listed as lodgers in the home of the town’s school superintendent and his wife. Recorded as “Golda,” she was the youngest member of the household with no one older than 27.

In 1937, at the age of 28, Ross asked herself, “Are you going to go and see anything of the world, or are you going to stay in Northern Oklahoma?” The question prompted her to take a civil service exam, which led to a position as a statistical clerk at the Bureau of Indian Affairs in Washington, D.C.

She had not been there long when a woman from the bureau’s education department told her, “We can’t waste you here. You’re an Indian with a degree and experience in teaching. We need you in the field.” Before the end of the year, Ross had been transferred to an Indian boarding school in Santa Fe, N.M., where she served as advisor to female students.

Enrolled in graduate classes in mathematics during the summers while she was teaching in Oklahoma, in August 1938, she completed requirements for a Master of Arts degree in mathematics from the Colorado State College of Education at Greeley. While there, she took every astronomy class offered by the school, and read intensively on the subject on her own.

The next year, Europe was plunged into World War II, and in December 1941, the United States entered the conflict, which produced change of epic proportion. The next year, while visiting friends in Southern California, Ross learned that the Lockheed Corporation was short of highly skilled workers with her technical background.

Encouraged by her father, she applied for a position and was hired by the company as a mathematician later in 1942. She was assigned to assist the engineering staff with a problem affecting one of the firm’s aircraft, the P-38 Lightning fighter.

The twin-engine, twin-tailed aircraft could approach the speed of sound in a dive, but it became unstable, resulting in the deaths of a test pilot and an undetermined number of men who flew the aircraft in combat. Rushed into production despite its problems, the fighter posed a danger to its pilots and presented a weakness enemy aviators exploited in aerial combat.

Correcting the design issue was the task of a team of engineers assisted by mathematician Mary Ross, as she was known by her co-workers at Lockheed. Isolating the problem was difficult and eventually was traced to multiple factors.

Part of a team, working in secrecy, Ross must have made significant contributions to resolving problems plaguing the P-38, for at the end of the war, officials at Lockheed asked her to continue working for them and offered to underwrite the cost of education at the University of California, Los Angeles, to secure certification as an engineer.

When most Rosie the Riveters returned to their homes and families at the end of World War II, 37-year-old Mary Golda Ross remained at Lockheed doing a job usually considered “men’s work” for at least another generation.