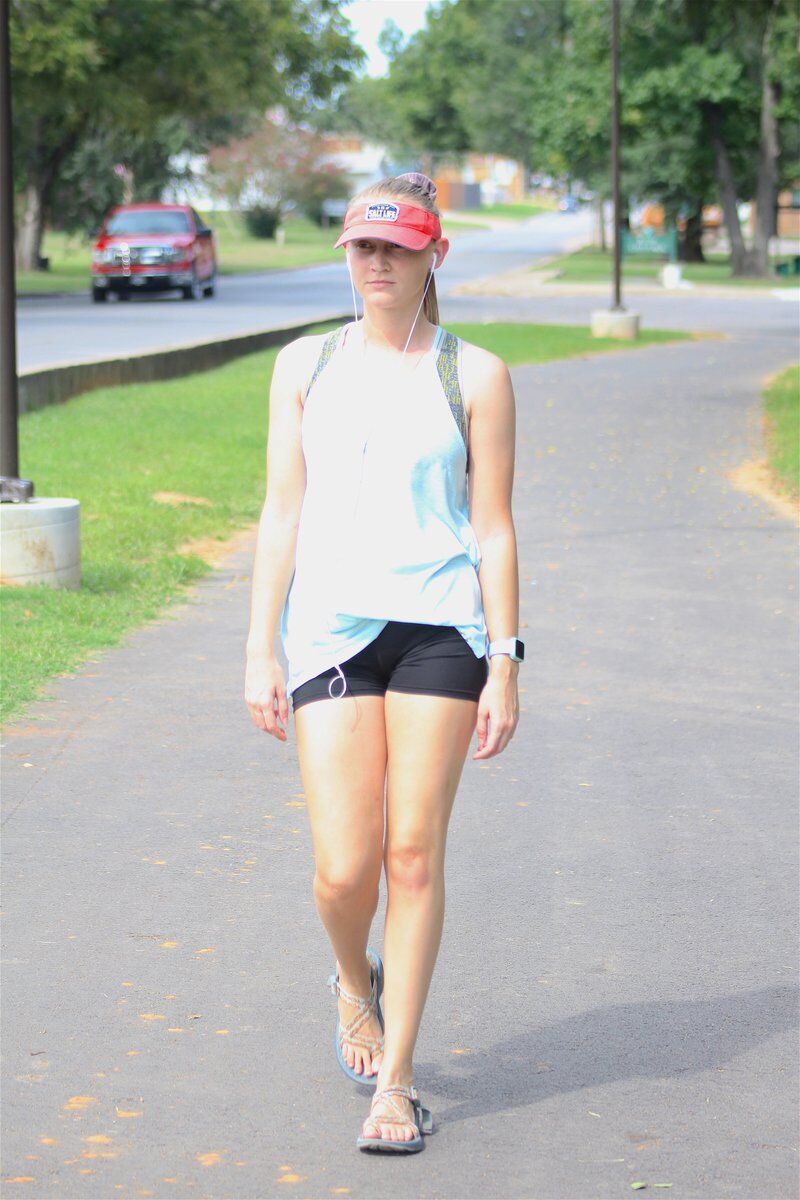 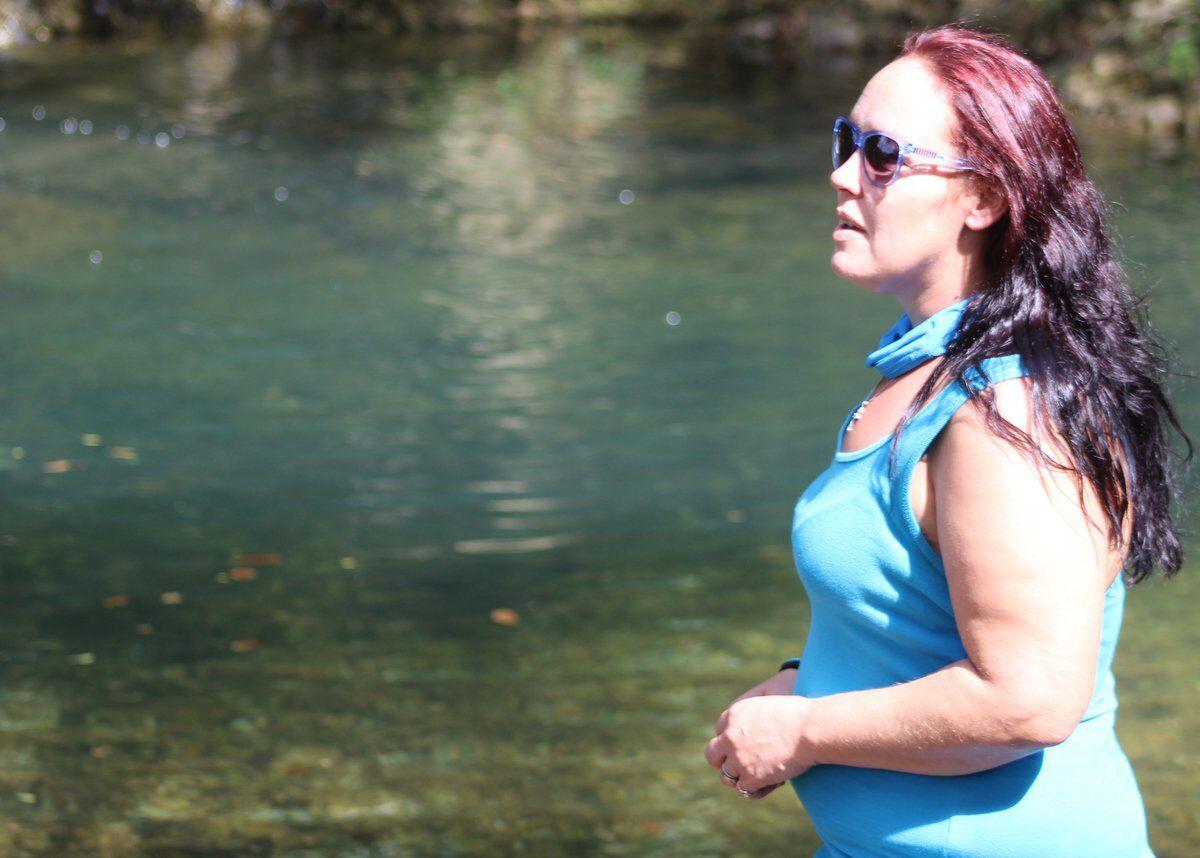 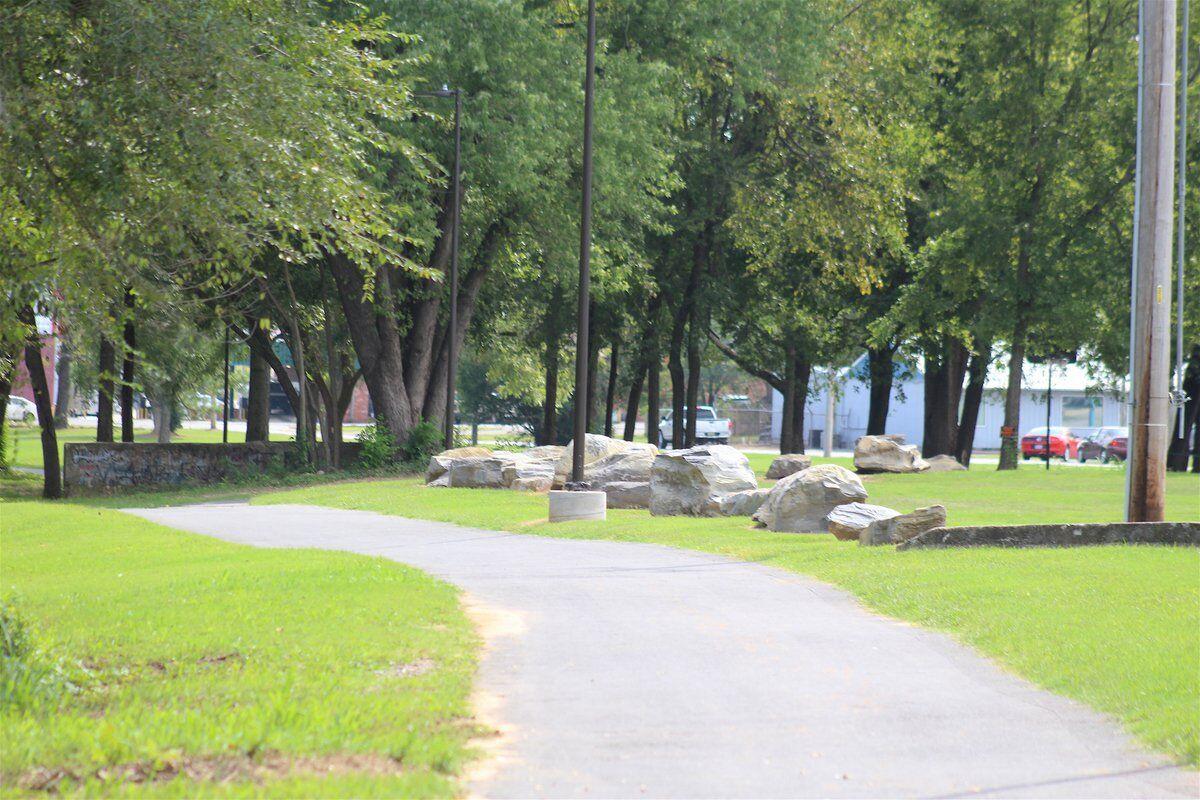 As Tahlequah’s trail system continues to expand, more residents have been out enjoying the outdoors by walking, running, or riding along the new section of the paved trail that stretches along the Town Branch Creek.

There is now a route for people to take that goes all the way from Smith Street to the Fourth Street bridge, and it’s become a popular place for folks to get exercise. The journey comprises a few miles, giving pedestrians a chance to see several sides of Tahlequah.

“I really like this trail,” said Heaven Sisson, who was out and about this week. ”I do it almost every day, and for the past month or so, there have been a lot of people out here, especially I go around 6 or 7 o’clock.”

It begins with the Tahlequah History Trail on Smith Street, next to the Tahlequah Community Garden. As the concrete path winds its way along the creek, just before walkers reach a wooden bridge, they will quickly approach two benches donated by the Tahlequah Rotary Club in 2006, and an information panel about the Cherokee Nation’s Capital.

Once trail users cross the wooden bridge, they’ll notice a turquoise road crossing when they reach Seminar Avenue. The entire system includes the road crossings to help direct people and traffic. As the path continues through Northeastern State University’s campus, it hugs the creek, and walkers will notice a monument on the NSU lawn. The Monument of Forgiveness, created by Dutch-born sculptor Francis H. Jansen, was gifted to NSU to honor Tahlequah as the end of the Trail of Tears.

“I’ve always known this was here, but I’ve never really stopped and looked at it before,” said Nesly Parks, who decided to stop and look at the monument Tuesday. “I drove past the other day and told myself I would come back to look at it more closely.”

Through the NSU campus and onto Muskogee Avenue, the trail continues for a small portion of Main Street. Walkers will pass The Branch, cross Muskogee Avenue at the turquoise crossing, and wind up on the sidewalk next to Norris Park. From there, travelers can make their way through the park – maybe stop to let children loose on the playground – and cross Water Avenue, where they’ll pass up the Tahlequah Splash Pad before crossing Downing Street.

Wayfarers will pass up a popular lunch joint, Presley’s Burgers, and take the sidewalk through Sequoyah City Park. There, the trail runs parallel to the Town Branch Creek again. After passing another playground, ramblers will cross Shawnee Street as they traverse along the creek. Children, adults, and even pets often stop to dip their toes in the cool water.

“I come here quite often,” said Arnold Melancon. “It’s a nice place to eat lunch. A lot of people walk down here or let their kids play in the water.”

The trail passes behind the Tahlequah Armory Municipal Building, continuing on with the Tahlequah Skate Park adjacent to it. Skaters can be seen coasting along the paved ramps there, performing dare-devil stunts. The course then goes past the Veterans of Foreign Wars building, crosses Choctaw Street, and continues onto Park Avenue, where the newest section of the trail has been added.

South Park Avenue includes a dead end, but where the road stops, the pathway continues. It travels through Ross City Park, where pedestrians will notice a bridge that crosses the creek. While not necessarily part of the trail, the bridge takes walkers through a wooded path that requires a few a hurdles up some large boulders and onto Bluff Avenue.

From Ross Park, the trail continues along Water Avenue and goes all the way to First Street. However, those who take their time can stop and view a small waterfall – which very few realized existed before, featured within the Town Branch Creek – before they reach road. It’s not uncommon to see folks stopping to cool off by putting their bare feet in the water.

Crystal Bradford did just that on Tuesday.

“It’s a nice place to hang out,” she said. “The water is nice, and the new trail is awesome. They’ve made it look nice.”

Traveling along, after walkers cross First Street, they have a brief distance to travel before crossing Bluff Avenue. The pathway continues past Felts City Park all the way to bridge that crosses Fourth Street. Those who reach the end will hear a roaring sound of vehicles passing overhead on the bridge – a sign that it's time to turn around.