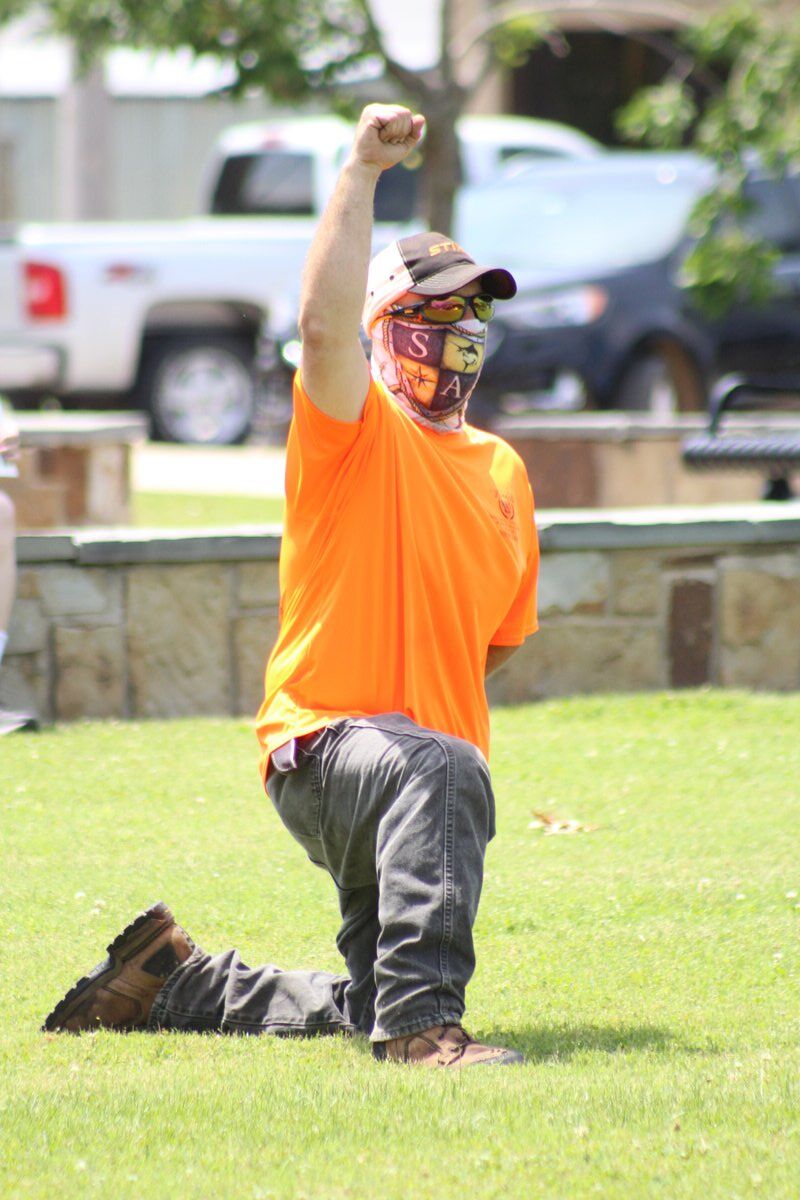 A protestor at Norris Park kneels with his fist raised in the air. 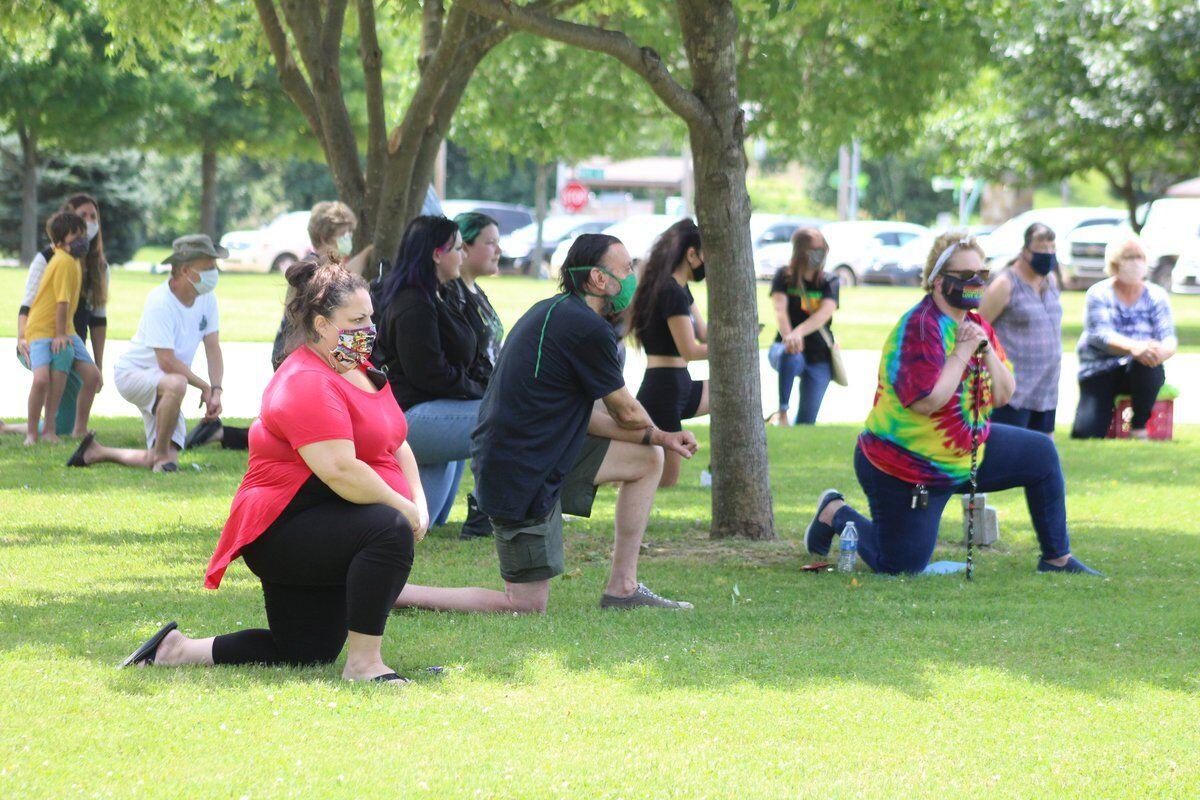 A group of locals attended a demonstration at Norris Park Thursday to protest the death of George Floyd. 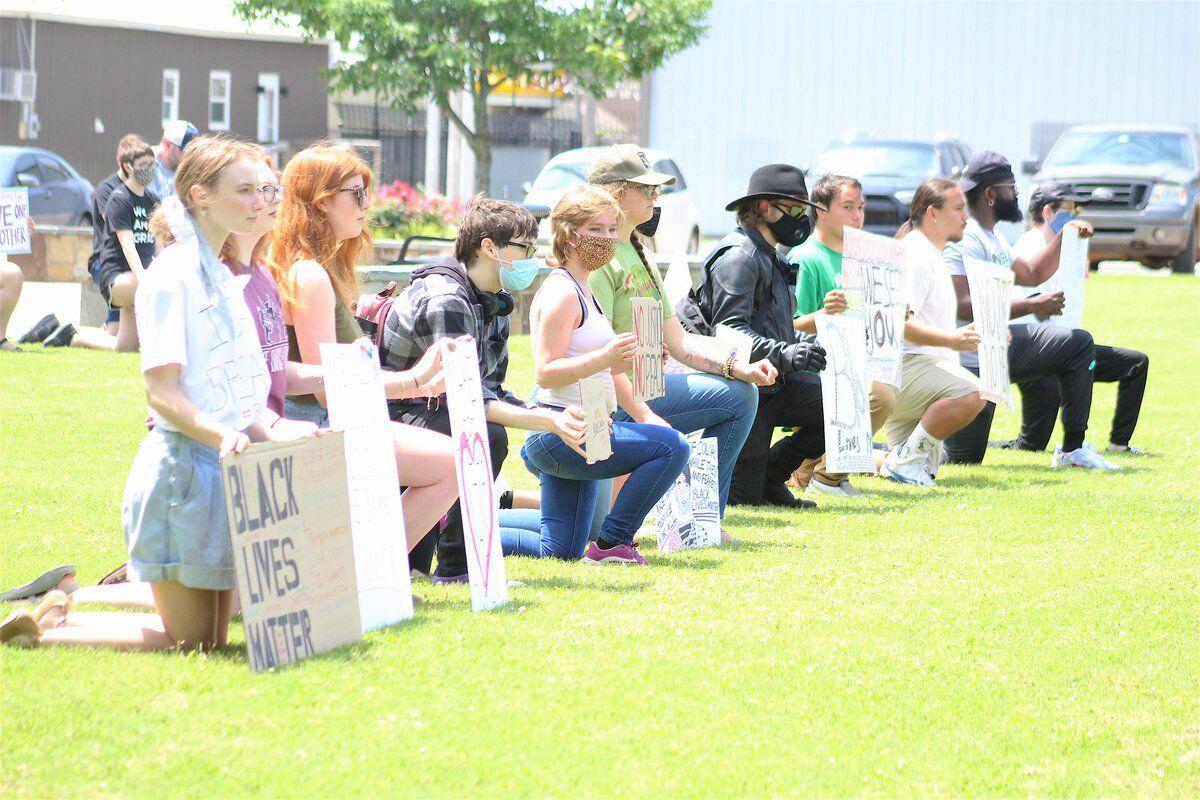 A group of citizens got on one knee to protest the death of George Floyd at demonstration at Norris Park Thursday.

A protestor at Norris Park kneels with his fist raised in the air.

A group of locals attended a demonstration at Norris Park Thursday to protest the death of George Floyd.

A group of citizens got on one knee to protest the death of George Floyd at demonstration at Norris Park Thursday.

After images of police and citizens clashing in the streets of U.S. cities swept across media outlets and social media, a group in Tahlequah responded Thursday with a silent, peaceful protest at Norris Park.

It was a multigenerational cultural demonstration, as people of all ages and races arrived to protest the death of George Floyd, who was killed after Minneapolis Police Officer Derek Chauvin knelt on his neck for nearly nine minutes as Floyd repeatedly said, "I can't breathe."

At noon, each demonstrator fell to one knee and quietly held up signs that read "Black Lives Matter," "Love One Another," and "Hatred Divides." Many wore T-shirts that bore the words: "I can't breathe." At times, participants knelt with one fist raised in the air.

Rebecca Rasmusson, who helped organize the event, said she wanted to get involved and thought the peaceful rally was best way to spread awareness.

"I think this is really a way people can come outside of their homes and actually make a difference, especially in Tahlequah, because I feel like we really need it in our community. And it may be a little bit safer than driving up to Tulsa, where I know a truck drove through a crowd up there. So we thought this was a safer alternative."

Rasmusson was not the only one who felt Tahlequah was a safer venue. Stanley Swain, who is originally from Tulsa, said he wanted to show support and that the rally was too close for him not to join.

"I was too fearful to travel to a bigger city," he said. "I was scared I might not make it back. I live in Tahlequah for a reason. I don't know the last time somebody was shot and killed in Tahlequah and it wasn't investigated. People are nice here."

While participants remained calm and the event conflict-free, a few worried their peaceful demonstration could turn hostile. Rasmusson said the group received "threats" on social media from people who claimed they would show up wearing MAGA hats and toting AR-15 rifles.

"We think they were just keyboard warriors, but we thought it was good that we still come today and take a stand," she said.

Tahlequah Police Chief Nate King had officers lining Main Street "to protect businesses just in case things got rowdy." He, too, saw comments on social media that were "not necessarily a threat," but antagonistic in nature. He posted a video to Facebook before the event and said those who showed up wearing MAGA hats or brandishing firearms would perhaps not foster peace.

"I'm not telling people they couldn't come," he said. "It's their opinion, and we shouldn't have to come to blows or be antagonistic with one another."

King said he didn't expect anything less than a peaceful assembly, but as a law enforcement official, it's his job to expect the worst.

"We didn't think Ms. Rasmussen or her group of people with her would cause any problems at all," he said. "We're here in support of their First Amendment right and to protect and keep the peace. We're happy they're here."

As the afternoon progressed, some of the supporters began to leave, but others filled their places. At one point, a line of demonstrators kneeling on the grass at Norris Park would have been considered from "younger generations." Swain said it was the generations before them who stood up during the Civil Rights Movement of the mid-1900s, and now, it's their time to be a voice for change.

"Back then, they were just asking for the nation to treat them civilly," he said. "Now it's time that everybody be treated equally. It's past that time, but it's the time that it be demanded, and it's the young people who are demanding it. The fear hasn't set in on them yet, and that's good."

Mayor Sue Catron visited the park Thursday, too. She said she was proud of the "people making a stand and using their voice" to protest police brutality.

"It takes a lot of personal conviction, and it is what this whole country was built on," said Catron. "You go back through history, and the [Boston] Tea Party was not a quiet, compliant event. Change happens, because people insist on change. I was a kid in the '60s, and you wouldn't think we would still be here."

Catron personally spoke with the protesters as they knelt on the ground. Tyler Maruca was among them.

"Anybody can show support to this movement," he said. "It's not about race; it's about the fight against hatred, and it's about trying to basically reteach and re-educate systems of oppression that have been taught and engrained into our heads for generations. This is a generational problem that I think we're seeing, and that's why you see so many younger generations out here fighting against it."

After the event, local resident Judy Gamble dropped by the Tahlequah Daily Press office to complain that the protest organizers came from outside of the community.

"I think all lives matter, not just black lives," said Judy Gamble. "I think that was a criminal offense when the policeman took the life of the black man, Floyd. I absolutely do not condone any of that. What I don't like is people from outside of our community, outside of our state, outside from our part of America, trying to influence people here."

However, Rasmusson, 17, is a member of the community. She attended Tahlequah High School, and in January the TDP reported she was among the students awarded a Gold Card, which is given to students who earn a grade point average of 4.0 or higher for the semester. A young man who was among those announcing the protests on social media was also a long-time Tahlequah resident.

A similar event is scheduled for Saturday at 2 p.m. at Norris Park. It is also billed as a peaceful First Amendment expression for the people of Tahlequah and the surrounding areas. King said police officers will be attendance, and that he hopes for another peaceful assembly.

Members of the Tahlequah community gathered at Norris Park Thursday to protest the death of George Floyd.