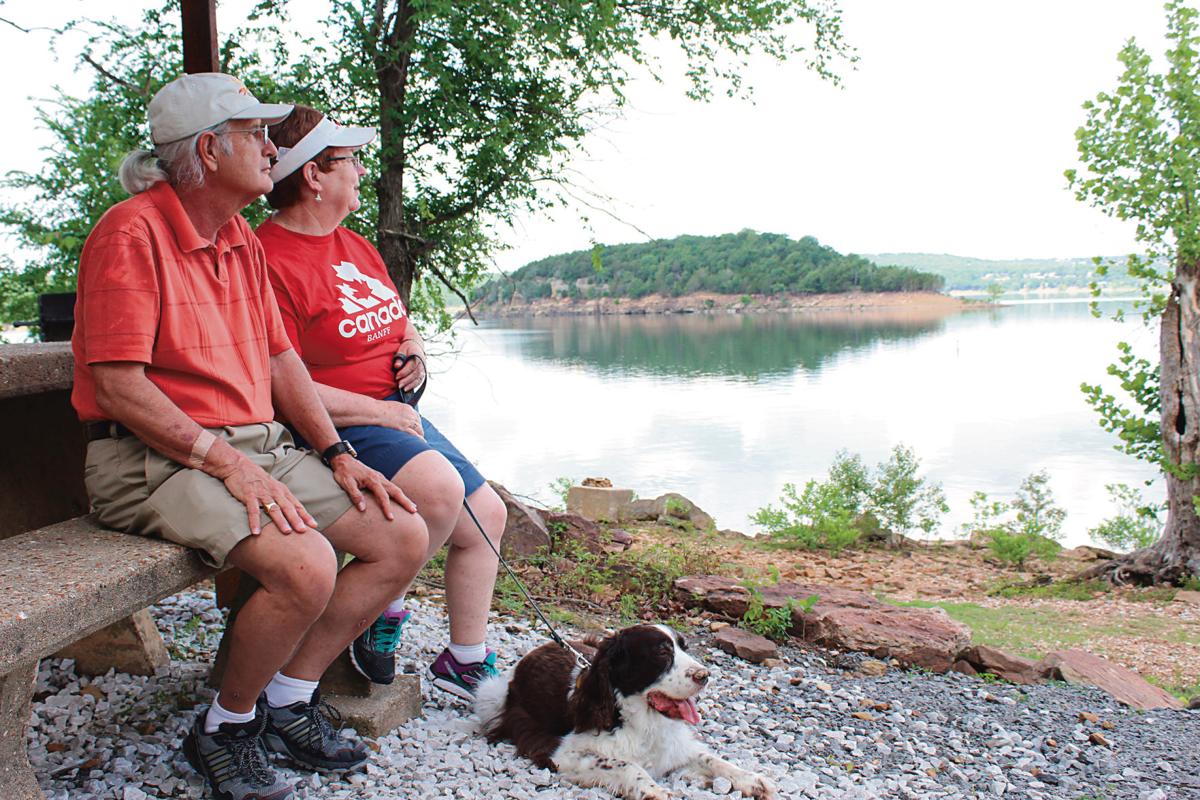 Charles and Norene Shore sit on a bench with their dog, Clancy, at Tenkiller State Park, looking out over the lake. 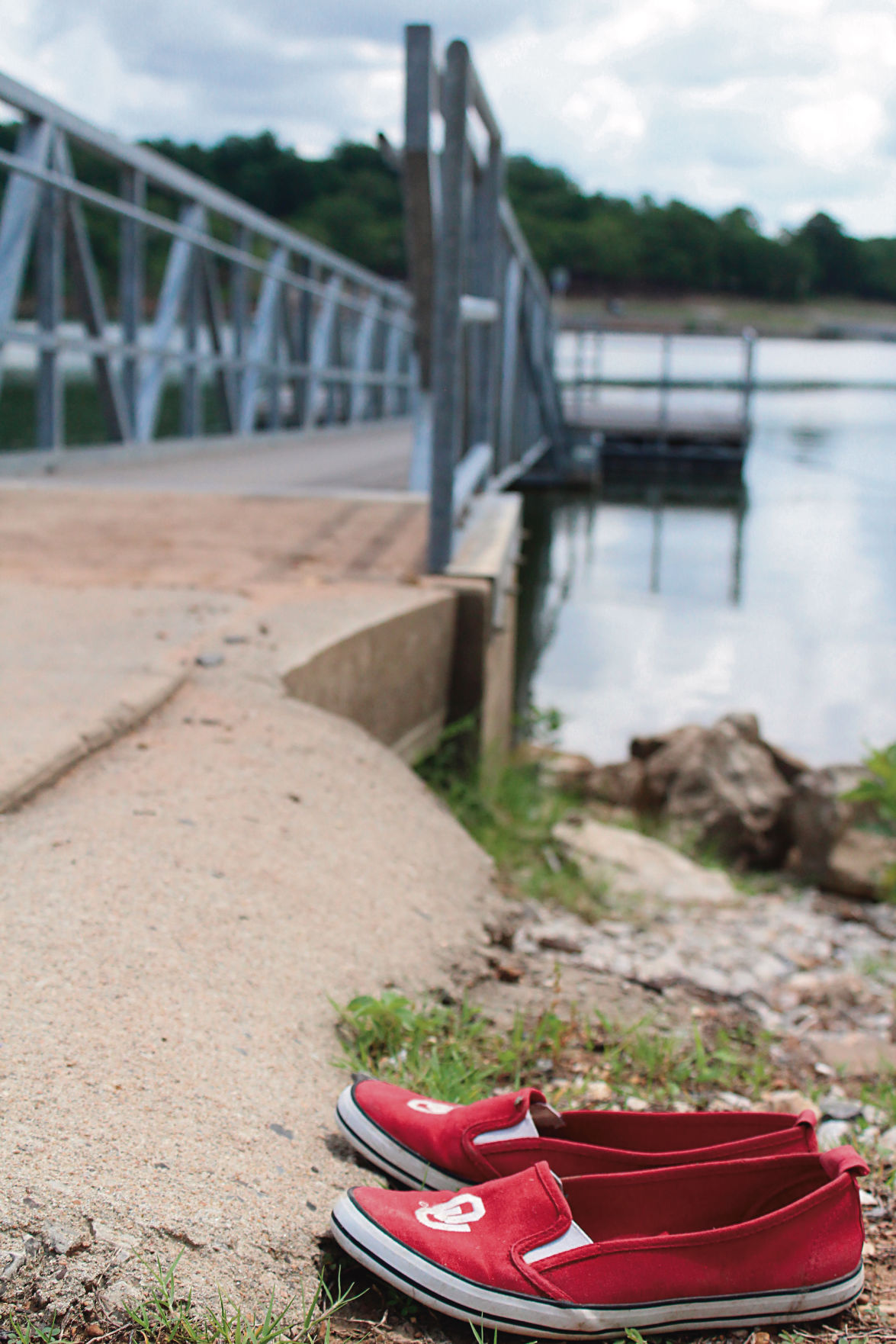 A pair of shoes were left at a dock on Lake Tenkiller at Tenkiller State Park Tuesday.

Charles and Norene Shore sit on a bench with their dog, Clancy, at Tenkiller State Park, looking out over the lake.

A pair of shoes were left at a dock on Lake Tenkiller at Tenkiller State Park Tuesday.

The U.S. Corps of Engineers began construction of the Tenkiller Dam in 1947, to create Lake Tenkiller, now known throughout Green Country and Oklahoma as one of the best places for water and outdoor recreation.

Then, in 1953, the federal government established Tenkiller State Park, the area’s gem of a camping and boating spot, lying hidden among the tall trees that wrap the lake. The park has since played host to countless fishing expeditions and camp outings – so much so that the area has been dubbed as Oklahoma’s “Heaven in the Hills.”

It is it difficult for boredom to set in at the state park, because the number of activities on or around the lake are numerous. On land, the front side of the park features an 18-hole disc golf course with discs available for rent. There are two hiking trails: a 1.5-mile paved trail and a mile-long natural surface path. Near the park office, the Driftwood Nature Center has live exhibits including snakes, turtles, fish and a tarantula.

“The park naturalist has programs, activities and events,” said Pulliam. “She had a fishing clinic this past weekend and had 45 kids that came to that. They caught a lot of fish and learned a lot.”

Within the park, Pine Cove Marina offers rentals on ski boats, pontoon boats, tubes, paddle boards and kayaks. For many, the lake is the only place to be during the day. Manny Jupp said his favorite lake activity is tubing, but his last experience had him jokingly hesitant to do it again.

The park also offers underwater adventure, as they can explore the depths of Lake Tenkiller in its scuba diving area. There, people can investigate artifacts left behind from when the Illinois River was flooded to create the lake.

Even though a massive body of water lies next to the park, Pulliam said the swimming pool is one of the more popular features at Tenkiller after being renovated two years ago. He added that one of the “neat features of the swimming pool” is that it is wheelchair accessible.

“So you just walk into the water and it’s a gradual incline, until you get to the deeper end,” he said. “We’ve even got a splash pad built into the pool and there is a great big bucket dumping into the water. There’s also some little buckets dumping in, and then there’s water guns that you can squirt people with. It’s just a blast.”

Tenkiller State Park has 38 cabins to choose from, six of which were renovated during the winter. The park also offers eight camping areas with 144 total campsites. Some campsites have electric, water and sewer hookups.

Because some of the hidden gems in the area do not have a groundskeeper or caretakers, visitors are left to figure things out on their own. But at Tenkiller State Park, the staff and volunteers can let guests know of the most scenic spots on the lake or the best trail for a hike. For Norene and Charles Shore, Texas residents, the reason they returned to the park Tuesday was because of the staff.

Norene brought a jacket that meant something special, but due to a family emergency, the couple packed up in a hurry and forgot the jacket.

“About a month later, we were going to a hockey game and I couldn’t find the jacket,” said Norene. “I called the park and they said, ‘Well let’s take a look.’ They called me about 20 minutes later; they had it and they shipped it to me. So when we’re looking for a place to visit, we thought, ‘Why don’t we go back to Tenkiller?’”