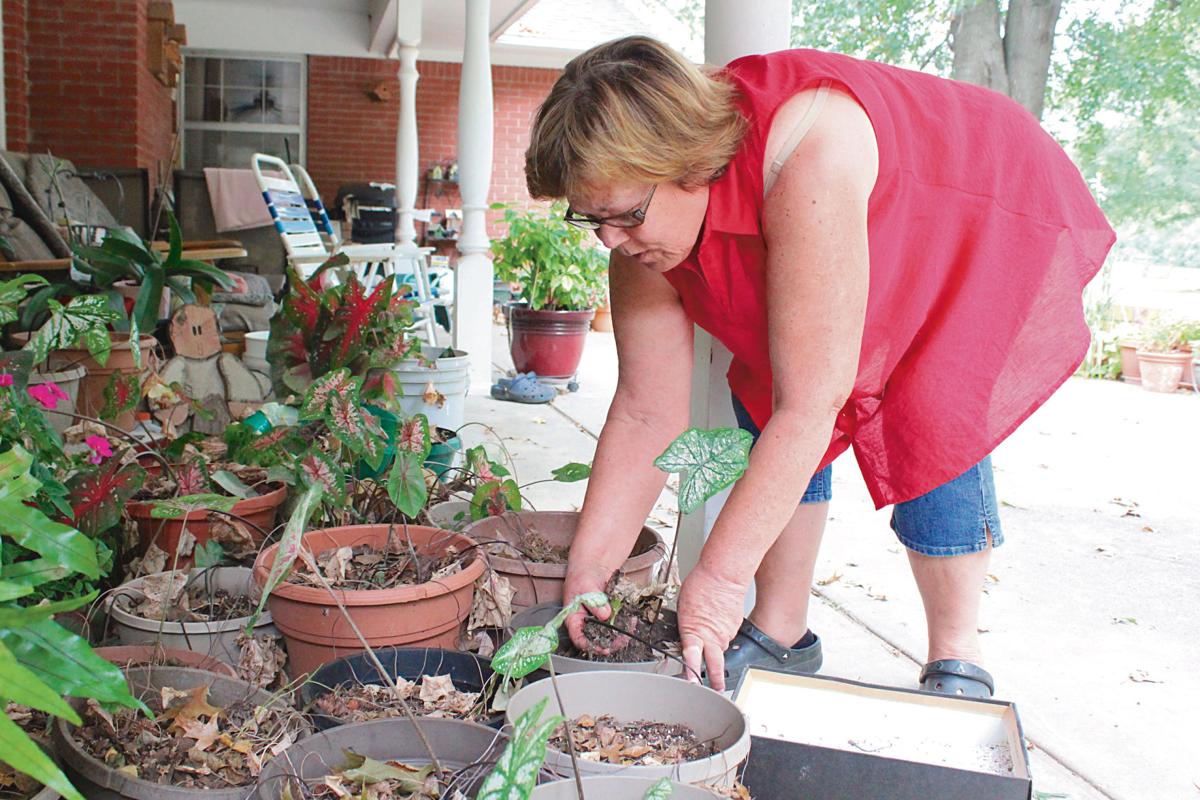 Barbara Partak digs up her caladiums from their pots and pulls out the bulbs, so they can be stored over the winter. 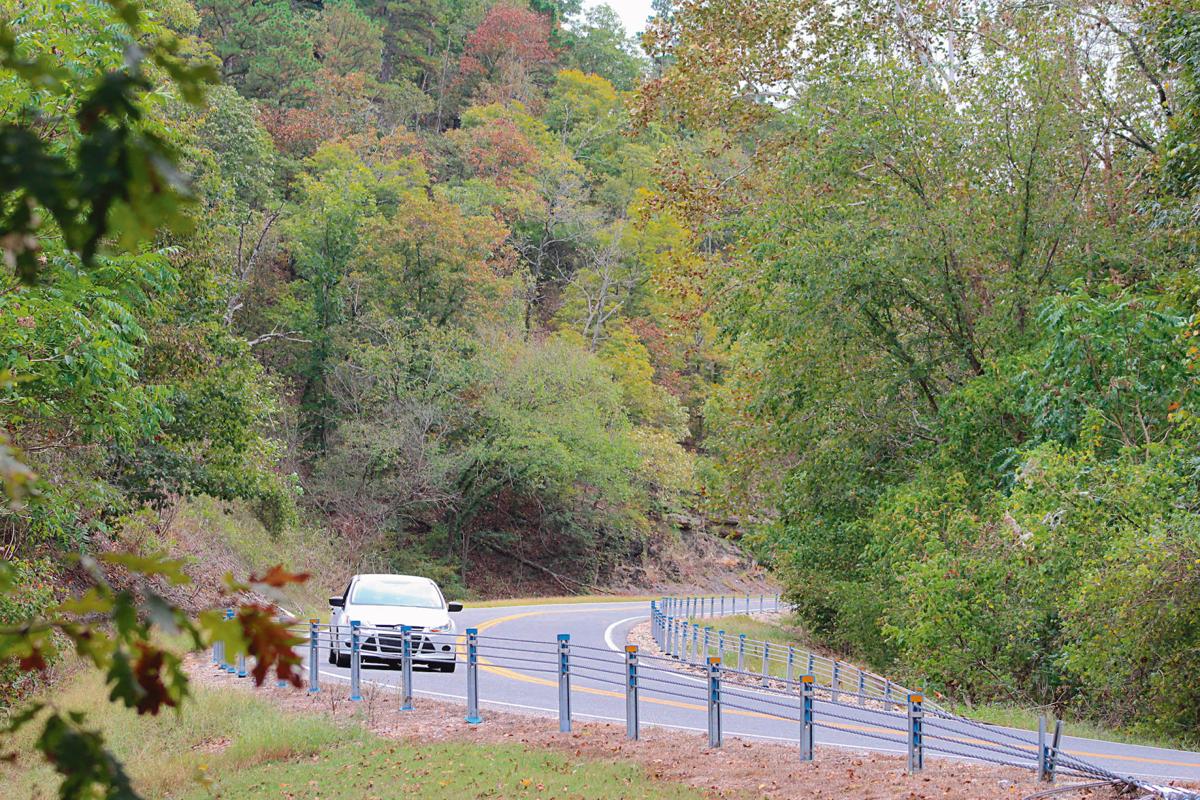 A car drives through Highway 10 in Tahlequah near No Head Hollow Public Access Area, a good spot to see fall foliage when it arrives. 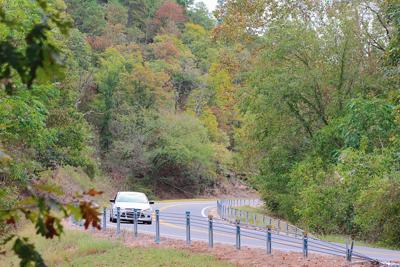 Barbara Partak digs up her caladiums from their pots and pulls out the bulbs, so they can be stored over the winter.

A car drives through Highway 10 in Tahlequah near No Head Hollow Public Access Area, a good spot to see fall foliage when it arrives.

Autumn has officially begun, and while it is still not quite time for the leaves to turn, the fall foliage in Cherokee County is sure to brighten a few spirits this year.

The area surrounding Tahlequah is resplendent with trees and wildlife. The thousands of acres of land near the Illinois River or Lake Tenkiller serve as habitat for an abundance of species. However, when the air cools and sweaters are pulled from closets, the trees and bushes of the area give an even more aesthetic appeal as the bright colors of fall creep in.

Even though it’s National Fall Foliage Week, Tahlequah isn’t quite ready to see the mix of colors set in among its trees, said Roger Williams, agriculture educator at the Cherokee County Cooperative Extension Service.

“Were on the cusp of it, generally, but we’re a little bit early for much of it to be going on,” he said. “It’s usually going to be further into October. Of course there are some trees that have a tendency to start a little earlier. The maples are the ones that kind of start to come on earlier.”

For fall to produce those traditional bright autumn colors, the conditions have to be just right. Leaves serve as food manufacturers for trees during the warmer seasons, allowing the tree to grow. When the fall comes, changes in temperature and sunlight can stop the food-making process.

“You’ve got to have warm enough days that the trees are still doing photosynthesis,” said Williams. “Then, you have to have cool enough nights, that the plant doesn’t have the ability to move those things that they’ve manufactured during the day down into the roots of the trees. It really has to be just right. You have to have sunny days that are warm enough, and then cool nights.”

There are many places around Cherokee County for people to experience fall foliage. Sparrow Hawk Mountain, Cherokee Landing State Park and Sequoyah State Park all have thousands of trees and places to walk. If the conditions are right, folks likely won’t even need to get out of their cars to gander at the brightly colored autumn leaves down Highway 10.

Now that summer is over, some might decide that the garden work is through, but it doesn't have to be.

“A lot of people don’t really enjoy the fall gardening, because they’re so tired from doing it all summer long,” said Williams. “But every year I try to promote people to take all the plants out of their garden. Do something other than just leave those plants there to die, lose their leaves and have diseases sitting there all year long just incubating waiting to jump on their plants when they plant them next spring.”

Barbara Partak of the Nasturtium Garden Club is preparing her plants, so that by the time next spring rolls around, she’s ready to begin the new season. The caladiums, or elephants ears, in her backyard have been pulled up, but they haven’t lost their worth.

“I’m pulling in bulbs that I want to save for next year,” said Partak. “I have a lot of caladiums, and they get expensive, so I pull them up and I prepare them for storage in the wintertime.”

After Partak digs up all of her caladiums, she lets them dry out, which “usually takes about two weeks.”

“Then I have a box full of perlite that I store them in so they won’t rot,” she said. “They have to go in the house. They can’t go in the garage. I’ve tried that before and they rot in the garage.”

While most fall gardens should already be going by now, there are still a few flowers that people can plant that will last through the winter.

“Now would be the time to plants mums, pansies, or snapdragons,” she said. “A lot of them will last through the winter, especially the pansies. The mums will bloom now. You can plant them now too, and they’ll survive through the winter, but they won’t bloom or anything.”

Partak added that “pansies don’t mind the cool weather at all.” They’ll even last through a freeze. Partak said if it’s really cold they might bunch up, “but when it warms up again, they pop back out and they’ll bloom for you.”

Fallen leaves might not be worth much to the trees that drop them, but leaves can improve a garden. Once the neighborhood kids are done jumping in them, people might want to bag up the leaves and spend less cash on mulch.

“A lot of my mulch is leaf mulch,” Partak said. “What I do is, I mow them so that they’re smaller. Then I put them around all of my plants.”

For a list places to visit in Oklahoma with fall foliage, visit www.travelok.com.

For more information about the Nasturtium Garden Club, call Monica Van Donkelaar at 918-718-9291.