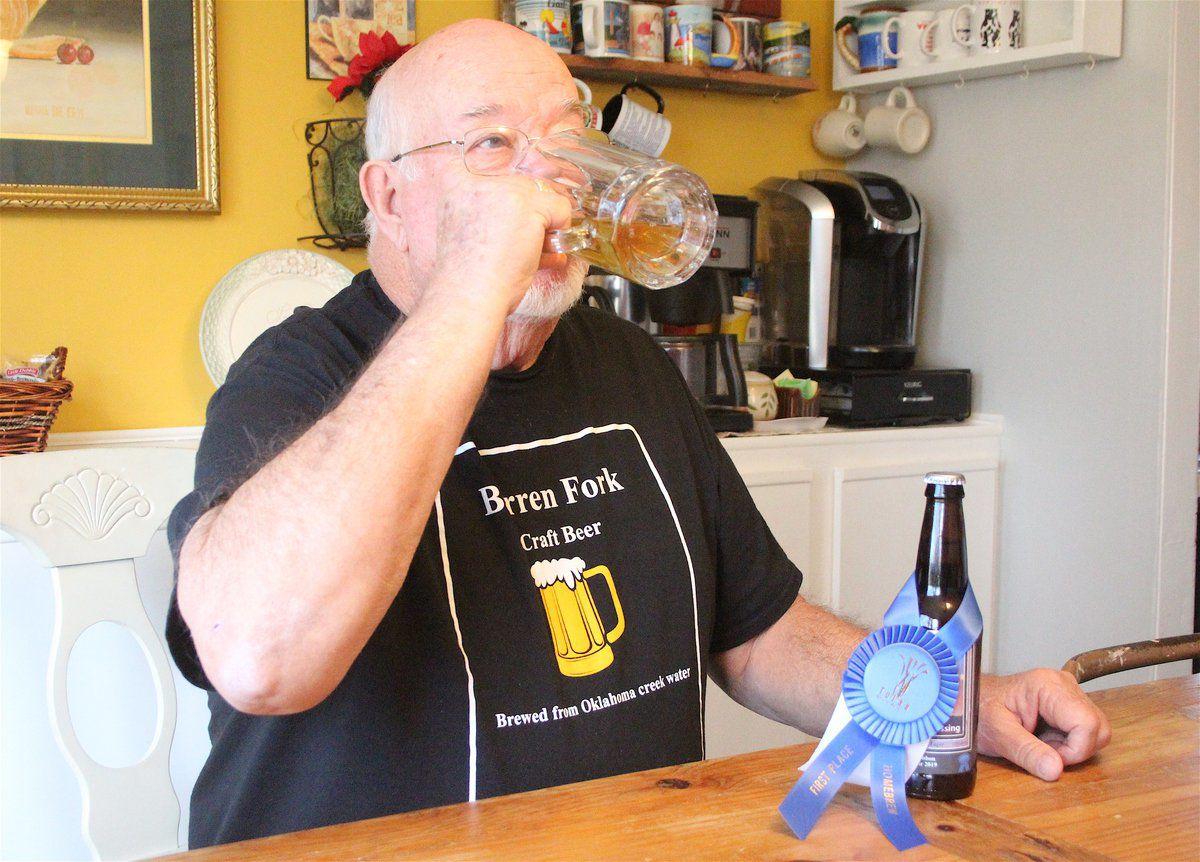 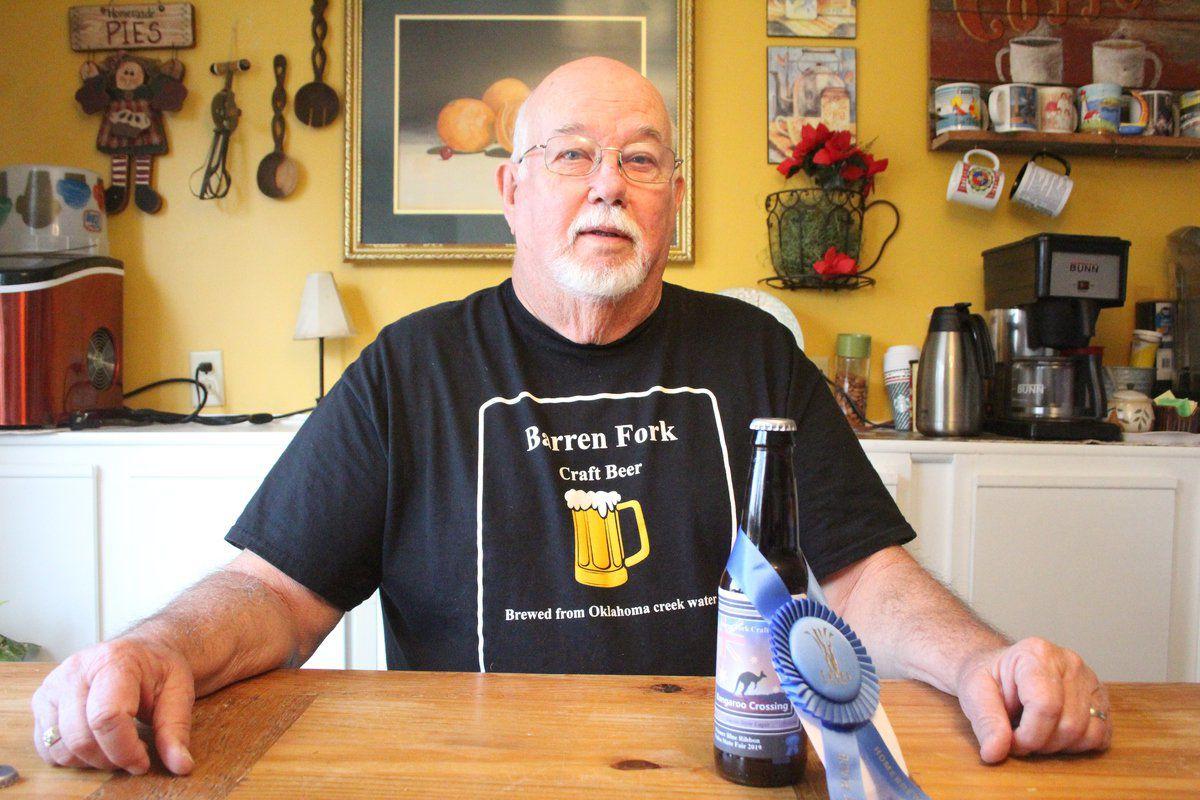 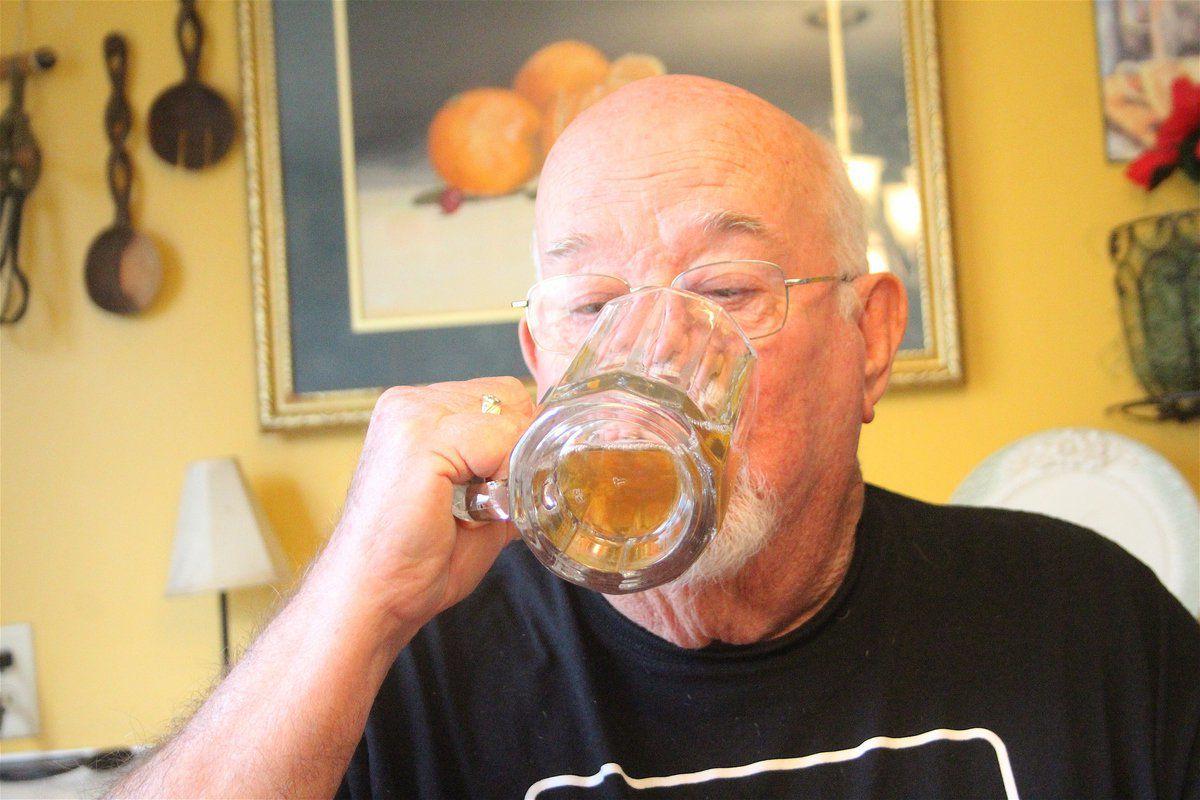 After years of painting, woodworking, and writing poetry, Blue has delved deep into making craft beer - what some people consider an art form - and recently took home a blue ribbon for his international lager at the Tulsa State Fair. Not much of a beer drinker himself, Blue enjoys the process more than consuming the final product.

"I like the creative part of it - taking ingredients and putting them together - and having something people really appreciate come out as a result," said Blue. "I like the science of it, to tell you the truth. There's a lot of stuff that goes on from when you first turn on the stove to when you pop that cap off."

Beer drinkers might think it takes years of practice and brewing to snare first place in a craft beer competition. That's not the case for Blue, who has only been concocting cold ones for about a year.

"On my 73rd birthday, my grandkids gave me a kit, and a book, and all the ingredients for my first batch, so I made that," said Blue, whose first brew was a Belgian-style. "I was disappointed in the results, but other people who tasted it said it was pretty good."

In his first time entering beer in the fair, Blue submitted an international lager and an American lager. After taking first place for the Australian (international) lager, he created a label and brand for his home brew: Barren Fork Craft Beer. Blue thinks the water quality of Barren Fork Creek, which supplies the municipal water, has contributed to his success.

"It's really good-tasting water, and I think that's another [factor]," Blue said. "In fact, when we were having this municipal water installed years ago, the EPA said that was one of the cleanest bodies of water in the country, which is surprising, because we have a creek down there called Peacheater Creek that runs into Barren Fork, and I think it's been contaminated by a lot of poultry runoff over the years."

Any contaminants in Blue's water will have been eradicated by the time he's done brewing, and he insists cleanliness is paramount to making a good beer. He said a brewer must "pay meticulous attention to detail."

"You can't skip any step, and sanitation is key," he said. "If your bottles and everything you use are not sanitized, you're opening the door for bacteria and other bugs to get in and wreak havoc with your brew."

Deemed by judges as an "enjoyable lawnmower beer," the winning lager Blue calls Kangaroo Crossing is fit for anyone who appreciates a smooth, flavorful draught that has a unique balance of malt and hops. It's also low in IBUs (International Bitterness Units scale), which means it will go down smoothly without the biting aftertaste.

Blue also brewed his beer in a fashion that he said strays from the pack. There are two ways to begin the process: A brewer can either use malt extract that's already been processed, or he can implement a whole-grain brewing process that takes more time and effort. Although extract brewing cuts out certain steps, the final beverage can taste just as good as one that's whole-grain brewed.

For Blue, it was better.

"Most so-called expert home brewers, they're a little snobbish and they think whole grain is the only way to go," said Blue. "That takes all day to do and it's really time-consuming. To me, doing an all-grain brewing is like an artist who grinds his own pigments to make his paint before he actually paints. Whereas, I take malt extract that's already been processed to that point, and then I make my beer from that, plus the hops and the yeast and stuff."

Blue has tried his hand at other styles of brew. He's made a California common, or steam beer; a kolsch, considered to be a hybrid that uses both lager and ale brewing techniques; a Kentucky Common; and a clone of a Sierra Nevada pilsner. He's also dipped his toes - not literally - into hard cider for his wife, Gail.

"She doesn't like beer," said Blue. "In fact, I designed [Kangaroo Crossing] for the purpose of making a beer she would like, but she still doesn't like it. So I make her hard cider. That's another process that is really satisfying. We use natural apple cider that's not clear; it's opaque. To see that turn absolutely clear over a matter of weeks, it's kind of neat."

Gail might not be a fan of her husband's beer, but she does approve of the hobby.

"He's retired, so it gives him something to do and keeps his mind working," she said. "Most of his beer, he gives it or sends it away."

The craft beer scene has exploded across the country in recent years. Tahlequah recently saw its first craft beer pub move in last year, and in Tulsa, breweries have popped up across the city. Blue recommends craft beer aficionados try brewing at least once. Not only does it taste better than beverages like Budweiser or Coors, he said, but it's also lighter on a drinker's wallet.

"I think if you like the taste of craft beer, I would highly recommend people get into it," said Blue. "You can make your own beer for less than half of what it costs to buy it, especially when you get into craft beer. That Kangaroo Crossing was 86 cents per bottle."

Drinkers may also appreciate the satisfaction of making a beer themselves.

For Blue, that moment comes when he sees a "crystal clear" pour of beer, bubbles rising to the top, and a 1-inch head of foam sitting near the rim of a pint.

"I really take a lot of pride in that," he said.