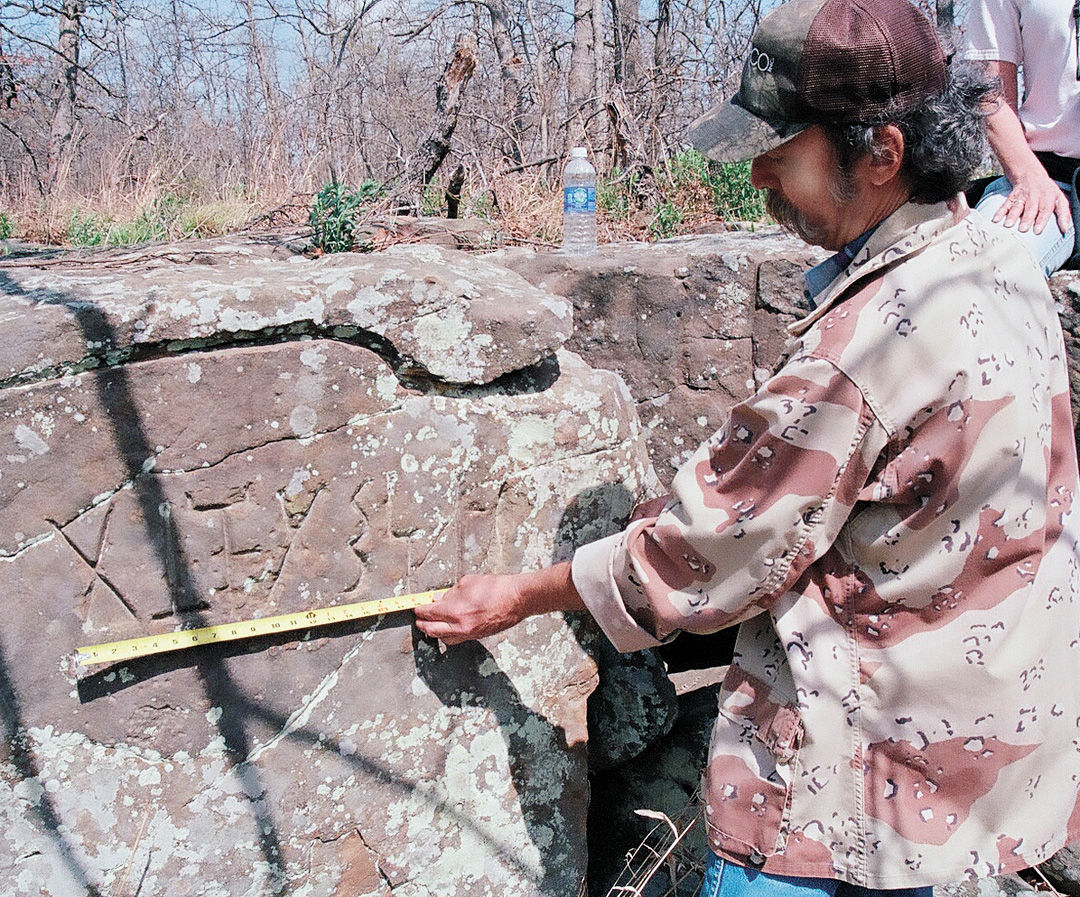 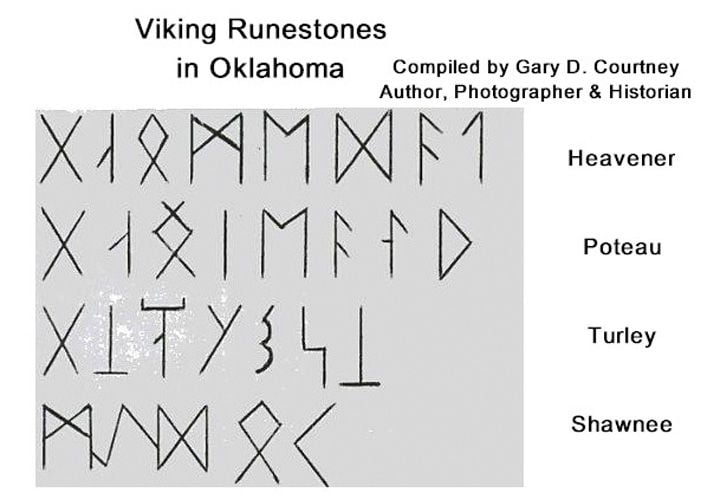 The seven ancient symbols of the Turley Hill stone inscription which are being studied by a Henrik Williams, a runologist in Sweden.

The seven ancient symbols of the Turley Hill stone inscription which are being studied by a Henrik Williams, a runologist in Sweden.

Thanks to the television series, “Vikings,” on the History Channel, Norse history and mythology are gaining popularity.

But what few area residents may know is that Vikings may have very well been making their mark in Oklahoma as early as 800 A.D.

Gary Courtney, former president of the Oklahoma chapter of the National Speleological Society and the first cartographer of area caves, has studied runestones in the state, and is looking to have a recent find authenticated.

“There are seven of these stones in Oklahoma,” said Courtney, a Tulsa-area resident. “The one in Heavener has been translate by Scandinavian scholars. There are five in the Poteau/Heavener area that have been certified. The one on top of Cavanal Hill has been determined to be a burial marker; the one in Heavener is a territorial marker. Three others have been counted in that same area. There is another one near Shawnee, and most recently, one has been studied near where I attended school at Turley Hill near Tulsa.”

Courtney said he grew up in north Tulsa and never noticed the runestone at Turley because is was on top of the mountain above the school.

“But other kids who lived closer to the school grew up playing on it back in the 1950s,” said Turley. “I’ve been working with Bill Burkhart of the Tahlequah Archaeological Society on this site. We went up on a field trip to the Turley site back in April.”

Burkhart has an extensive background in area ancient civilizations, is responsible for the oversight of some ancient Indian mounds in Northeast Oklahoma for the state archaeological authority.

“Bill scrutinized the photo of the ledge [on which the runestone is carved], and then looked very closely at each of the seven letters of the inscription, trying to decipher the symbols,” said Courtney. “He was focused on one particular symbol, and asked me if there was a waterfall near the runestone.”

Courtney recalled a place nearby called “Bird Creek Falls,” but had never been there. He consulted his topographical map of the area.

“There, clearly marked in the USGS cartography symbol, was the waterfall, due east of Turley Hill on Bird Creek,” said Courtney. “This was the end of the Vikings’ journey on this route, at a cataract on Bird Creek, which prevented their ship from continuing any farther.”

Courtney is working with experts from both Oslo, Norway, Sweden, to authenticate the site. He also hopes to get special designation for the land upon which the stone sits to protect it.

“Professor Henrik Williams of Upsala University in Sweden, is the foremost expert in the world on runestone translation,” said Courtney. “He inspected the stone at Heavener, and is coming next year to translate the Turley Hill runestone. We are working with the county commissioner in the area to get the area classified as a park, but he doesn’t want to spend any money. I told him we just want the designation, and will raise the money privately for the care. We’ve already started some fundraising ideas. I just think it’s really important for us to preserve this part of our Oklahoma history.”

Courtney said he will also be investigating a couple of sites in this area.

“We have word of possible runestones on two mountaintops - Vikings always went to the highest point to carve these,” said Courtney. “One is near the Arkansas border just east of Tahlequah, and the other is near Porum. Both come from verbal reports, and we’re pretty excited about it.”

Courtney said he’s interested in hearing from anyone who thinks they may have located a runestone.

“I want people to be really vigilant, if they see anything like this, and to get in touch with me,” said Courtney

“The most likely spots are at high elevations. They need to know where they found it and it helps if they know who the landowner is.”

Anyone who thinks they may have identified a runestone is invited to contact Gary Courtney, author, photographer and historian, at 918-822-0299, or by email at blackhawkpublishing@hotmail.com.