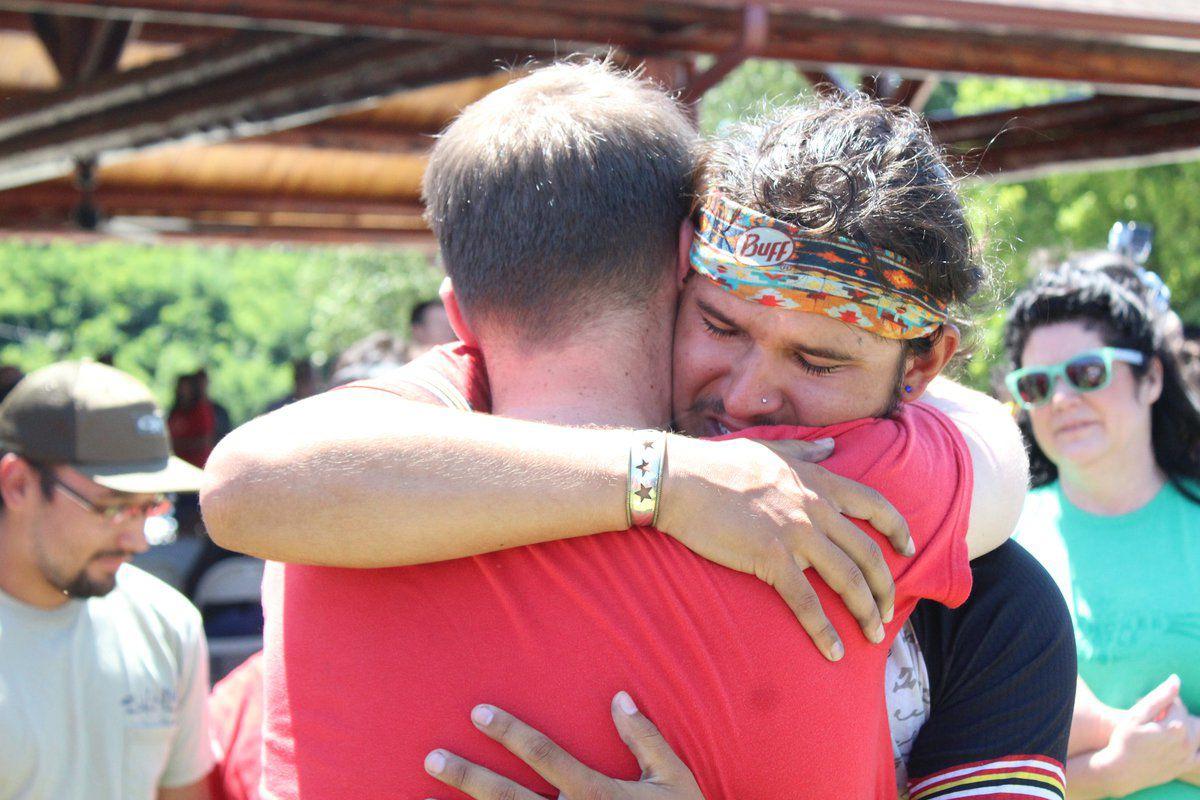 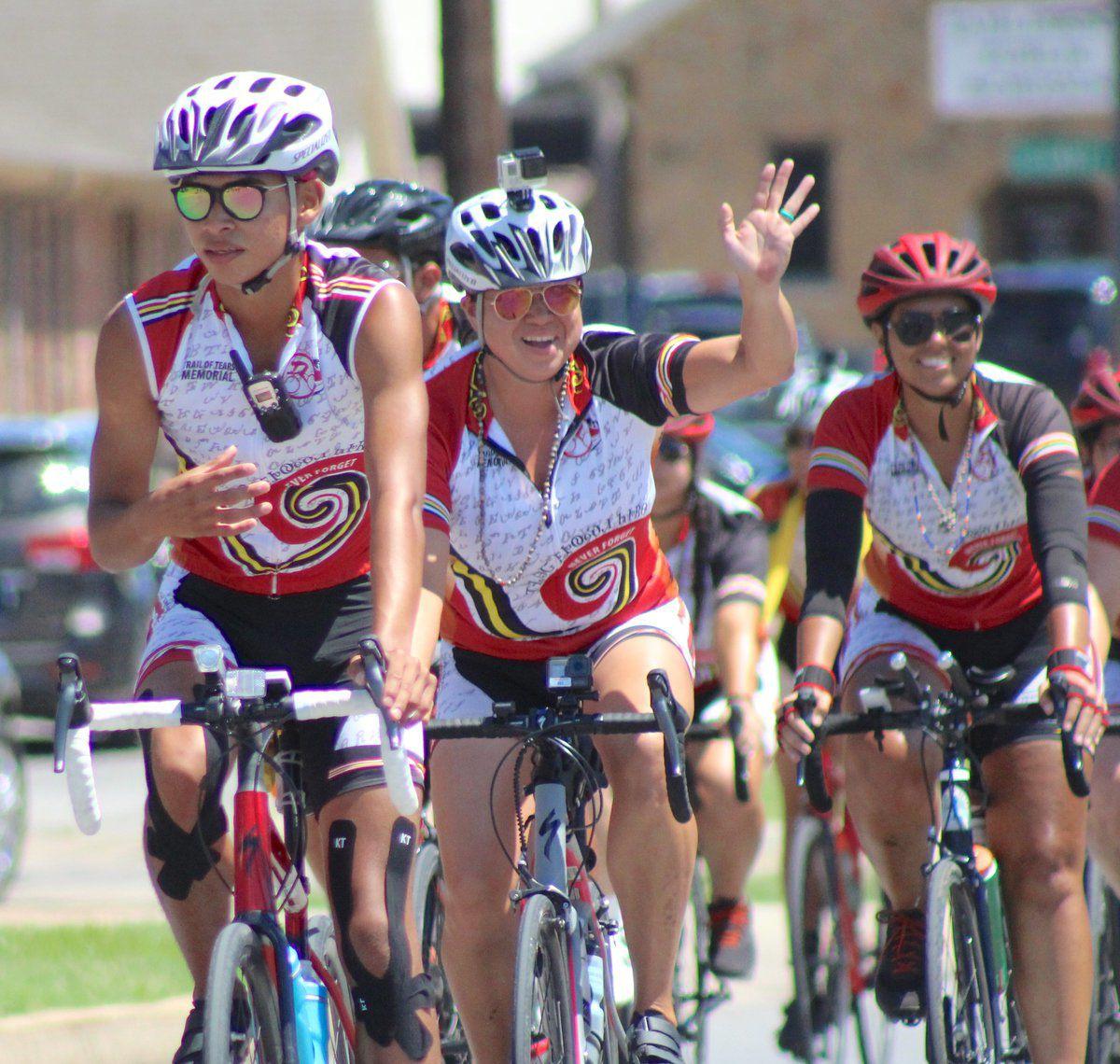 Darius Lambert, left, Ahli-sha Stephens, middle, and Courtney Cowan cover the last few yards of the 2018 Remember the Removal Back Ride on Thursday.

Darius Lambert, left, Ahli-sha Stephens, middle, and Courtney Cowan cover the last few yards of the 2018 Remember the Removal Back Ride on Thursday.

Tears welled in the eyes of onlookers as the 18 Remember the Removal bicycle riders wheeled Thursday into the Cherokee National Peace Pavilion on Water Avenue in Tahlequah.

After traveling nearly 1,000 miles through portions of seven states, the cyclists who retraced the northern route of the Trail of Tears over a three-week trek were greeted by friends, family and fellow Cherokees. The ride didn't come without wrecks and scrapes, but it also imparted life lessons and helped form lasting relationships.

Cherokee Nation Principal Chief Bill John Baker was able to debrief with the riders Wednesday night before their return home, and he said they were a changed group of individuals.

"They fully understand that these riders on either side of them are now their family, for now and forever," said Baker. "They get what has made Cherokees strong since the beginning of time; it's family."

From the beginning of their trip, which started in New Echota, Georgia, the riders learned about Cherokee Nation's history, language and culture, offering a glimpse of what their ancestors encountered on that same journey.

Cherokee Nation Businesses Executive Vice President Chuck Garrett, an avid cyclist, joined the riders for 459 miles and 17,527 feet of climbing though four different states. Garrett said his memories of the trip go beyond cycling, though.

"Together we stood at New Echota, where the treaty was signed, giving away our homelands," said Garrett. "We walked the grounds of Red Clay, Tennessee, where Cherokee councils had met, rejecting the terms of that very treaty. We knelt in Charleston, Tennessee, where thousands of Cherokees were imprisoned, awaiting the long and deadly trip west. And we floated across the Tennessee River at Blythe Ferry, where thousands of Cherokees left the original Cherokee Nation for the very last time. These are shared experiences that have built ever-lasting bonds."

The Trail of Tears is famous, as nearly 4,000 Cherokees died from exposure to the elements when they traveled to Indian Territory 180 years ago. While it's becoming more widely known in history books across the country, the public's general knowledge likely doesn't compare to the first-hand experience acquired by the riders over the past three weeks.

"I participated in the bike ride, because I wanted to know where I come from," said CN citizen Lily Drywater. "Being Cherokee is a huge part of my identity, and the Removal is a huge part of our history. I wanted to learn how resilient my ancestors were and to further realize how strong I am."

The cyclists were citizens from both Cherokee Nation and the Eastern Band of Cherokee Indians. They had to endure scorching heat and mountainous terrain, and even some wildlife.

Bo Taylor, from the Eastern Band, spoke at the return ceremony about fellow rider Lori Owle.

"I always thought she would quit, but she didn't," said Taylor. "She kept going and she got hit by a deer. Can you believe that? Riding through and we just had half a mile, and a deer hit her - sideswiped her - and flipped her up." Then, looking at her, he said. "We wouldn't let you sit in that. We made sure that you were OK, but then we started kidding you. We let you know that you've got to get up. No matter what happens in this world, or if a deer hits you, you've got to get up."

Although there was talk of having the Remember the Removal Bike Ride every five years, Baker said that would have "been a disaster," because he wants more young people to make a commitment to the experience - and to the Cherokee Nation.

"I couldn't be prouder of them," said Baker. "It's an education program, it is a leadership program, and if you have any doubts about the future of the great Cherokee Nation, look at these riders."