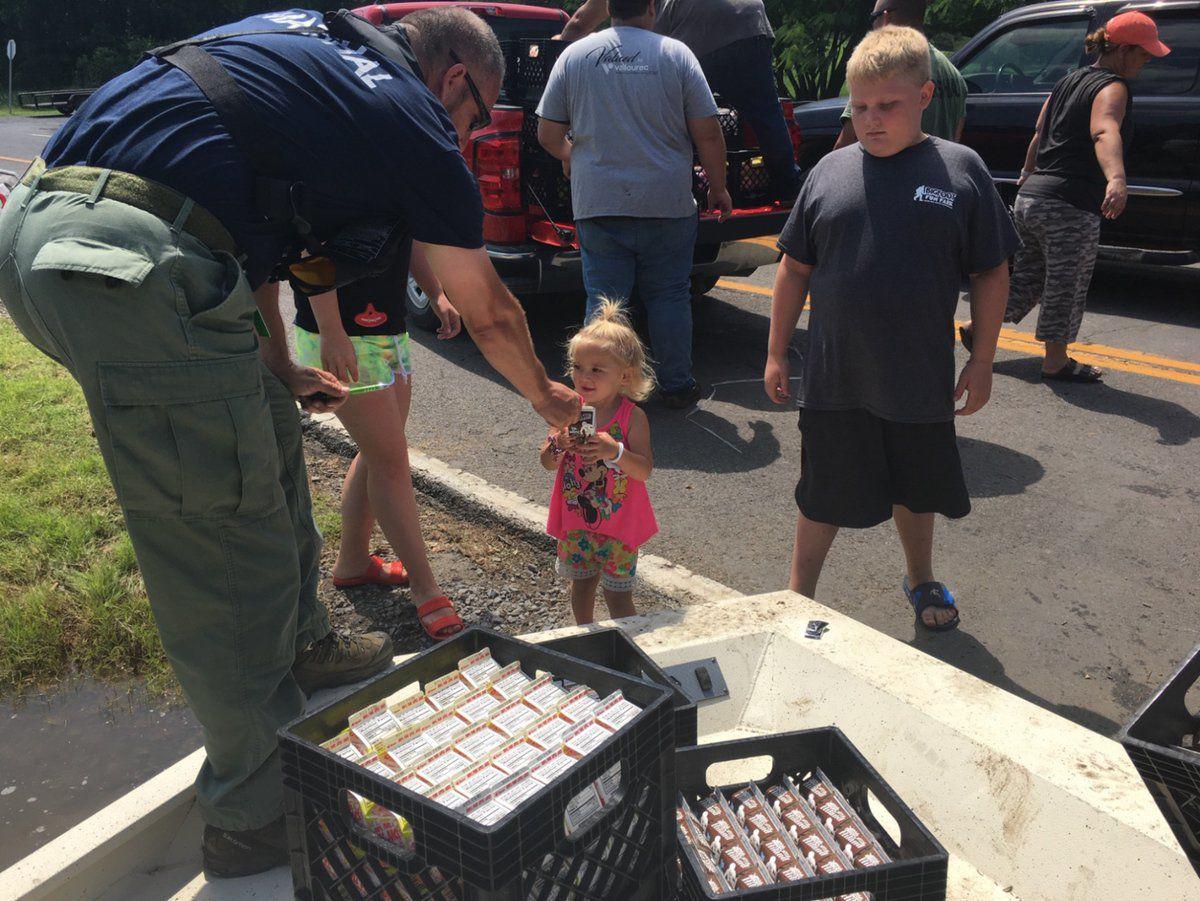 Cherokee Nation Marshal Sgt. Joe Rainwater hands out milk to residents of Braggs who were affected by flooding. The milk had to be brought in by boat since roads to Braggs were closed. 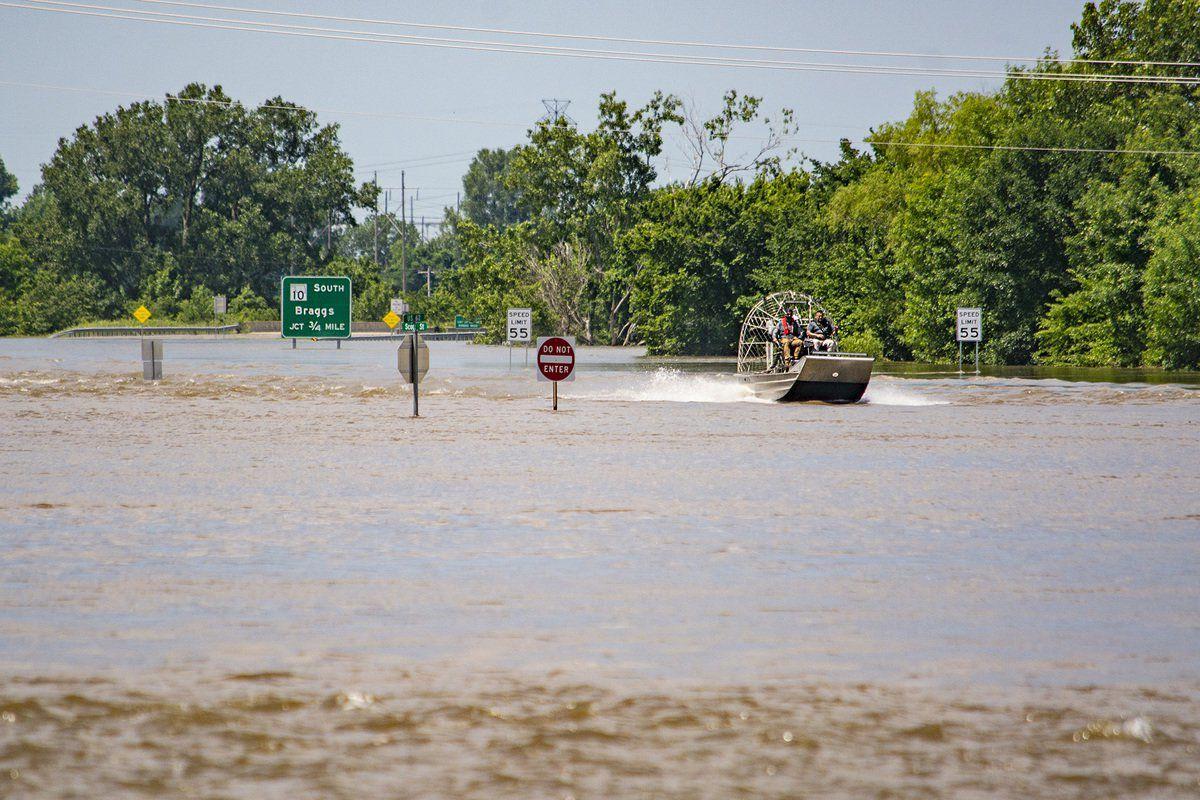 Cherokee Nation Marshal Sgt. Joe Rainwater hands out milk to residents of Braggs who were affected by flooding. The milk had to be brought in by boat since roads to Braggs were closed.

Recent floods and tornadoes throughout Oklahoma have wrought havoc on homes and businesses in Muskogee, Fort Gibson, Braggs, Peggs, Tulsa and other areas, but there's widespread disagreement on why the weather pattern is worsening.

Oklahomans went without power, lost valuable possessions, evacuated their homes, and watched as their houses and businesses filled with water. The cause of the damage is certain, but the flooding and tornadoes cannot be attributed to one factor.

"There's not just one reason you can point to," said Ed Calianese, National Weather Service Warning Coordination meteorologist. "Weather never works that way. It's a serious of things going in combination together that results in a lot of things, including tornadoes and heavy rain."

The severe weather in Oklahoma was enough to prompt Gov. Kevin Stitt to declare a state of emergency for all 77 counties. At least six deaths and more than 100 injuries occurred due to the weather, according to the Oklahoma Department of Emergency Management. Oklahoma saw at least 62 tornadoes touch down in May, while it also experienced one of the wettest in Mays in history.

"We had a slow-moving weather system that had lot of moisture associated with it, had a lot of unstable air associated with it, and strong wind flow aloft, which supported the severe weather," said Calianese. "And the high moisture content in the air day after day resulted in heavy rainfall."

The average rainfall total statewide was 10.48 inches, the third wettest May since records began in 1895, according to the Oklahoma Mesonet. The water only has so many places it can go. The U.S. Army Corps of Engineers has long been tasked with managing dams, levees and reservoirs, but the water came up so high during the storms that the Corps was forced to release water from the Keystone Dam and other reservoirs.

"So what you try to do is try to let as much water as you possibly can and affect as few people as you possible can," said Scott Pettus, Cherokee County Emergency Management deputy director. "You try to mitigate as best you can by releasing that, so you don't have a catastrophe. It's a balancing act. It's not only science of some degree, but there's a lot of art that goes into that."

Essentially, once the water table reaches a certain level - meaning the soil has become too saturated to soak up any more water - there is no other place for it to go except into lakes, streams and rivers. The current level of Tenkiller Lake is 24 feet above normal. So the Corps has to analyze downstream to decide whether to release more water.

"The reason it's like that is just simply because the Corps of Engineers can't discharge anything out of Lake Tenkiller now, because it eventually leads to the Arkansas River," said Pettus. "Everything is backed up."

When dam levels become too high, the safety of the structure itself can be in jeopardy. If the water is not released, an entire dam could topple and cause even further damage. Calianese said there could be unregulated flooding or regulated flooding, and the latter causes less severe damage to surrounding areas.

Another factor that could contribute to increased flooding is runoff. Pettus said he believes urban development in Northwest Arkansas has contributed to the two recent floods of record that have occurred on the Illinois River. That's because there is no place for the water to soak in, and it therefore it runs down the pavement and concrete surfaces into streams and rivers.

Gary McManus, with Oklahoma Climatology Survey, said the large amount of rainfall that has occurred would cause a similar to flood even in the 1800s, but urban development can exacerbate the situation.

Some people have speculated that the turbulent weather could be a result of climate change, partially caused by human activity. McManus said it's difficult to attribute a single weather event to climate change, and that it would require study over a broader period of time. Pettus agreed with McManus, and said that in his opinion, the recent storms are "not a result of any global warming."

The Daily Press asked readers on its Facebook Saturday Forum for their opinions on the recent flooding and its causes. While he said it may not be the cause of the all the flooding, Jason Santana wrote that the increased urban development likely contributes to the flooding.

Brent Been wrote that the number of tornadoes and rain is unprecedented, but pointed out the levees were not designed for this amount of water.

"As far as mismanagement of flood plains and dams, the thing to remember is that the levees that were constructed along the Arkansas River were not built to hold back floodwaters, but rather to ensure that enough water is running through the navigation channel in order to ship millions of tons of goods," Been wrote.