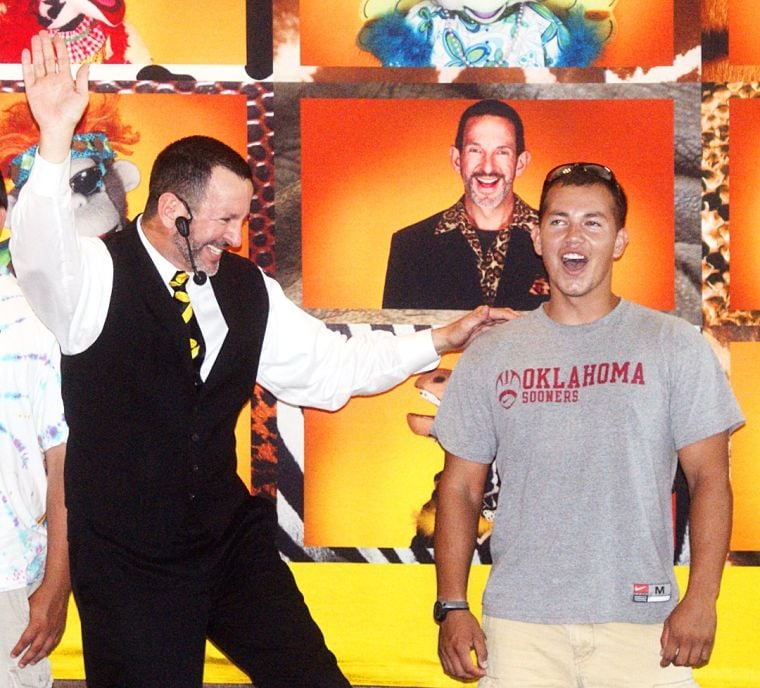 Dennis Lee, left, a Dallas ventriloquist and Oklahoma native, made good use of Tahlequah’s Nick Kirk by turning him into a life-sized puppet Tuesday afternoon at the Tahlequah Public Library. 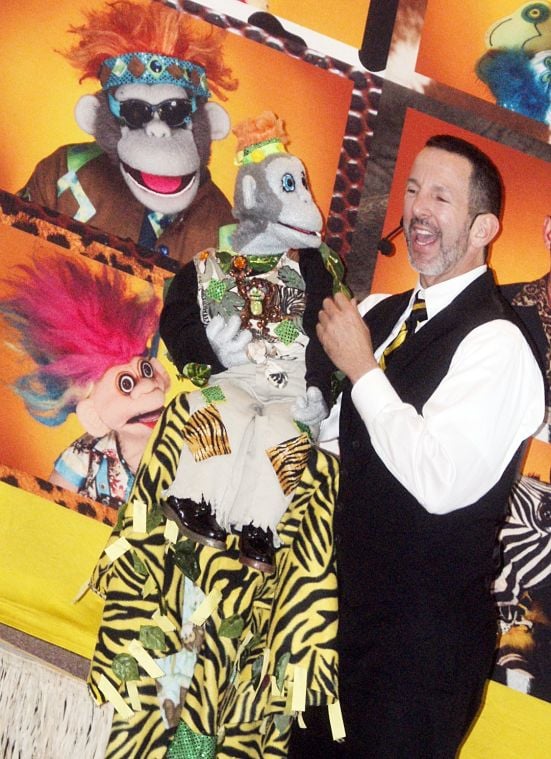 Dennis Lee, left, a Dallas ventriloquist and Oklahoma native, made good use of Tahlequah’s Nick Kirk by turning him into a life-sized puppet Tuesday afternoon at the Tahlequah Public Library.

Don’t call them “puppets.” They’re not “dummies,” either.

Dennis Lee, a Dallas ventriloquist and native Oklahoman, brought his team of “Mannequin Americans” to the Tahlequah Public Library’s summer reading program Tuesday afternoon for an hour’s worth of side-splitting laughter.

Lee and the Funky Monkey Bunch provided a character-building program to several hundred children, encouraging them to wear their HAT, an acronym for using their heads and hearts, always doing their best, starting today.

“My dad said my life was like a wagon,” said Lee. “I didn’t know what he meant. He meant what you choose to put in it, you will have to pull around and share with your neighbors. We want to lift up, not tear down, and spread the good stuff all around.

“When I was little, I would fill up my wagon with books, hopes and dreams about what I wanted to be when I grew up,” said Lee.

That dream was to be a public educator, but life took him in a different direction, to ventriloquism, which he’s been doing for about 40 years.

“Opening a book once a day can change your life,” said Lee. “I found out how to be a ventriloquist with a book. My mom checked it out at the public library for me.”

Lee introduced Baby Mickee, the young monkey also known as “Puddin’” for his love of banana pudding. Lee talked about how he holds Mickee with both hands out of caution, like all good fathers, mothers, grandparents, teachers and adults do with their babies.

“We want to be careful with our babies, with what they see, what they think, what they read,” said Lee.

Being nice to friends, helping others, and focusing on the good is important, said Lee.

“Yesterday is gone,” he said. “Who knows about tomorrow? Let’s celebrate today!”

Books are the tools, said Lee, that adults can provide children to help them stay afloat in life.

“If you’re choosing bad things, can you see the good?” Lee asked the children.

They agreed they could not. Lee introduced them to a rhyme to keep in their minds as they go through life.

Lee introduced the group to teenage zebra Amy-Amanda, who helped him explain the importance of choosing the best things.

He was interrupted by Amy-Amanda: “Sit down, you’re driving me nuts!”

“My dad said,” Lee continued, but was again interrupted by Amy-Amanda.

“Are you going to play with dolls forever?”

Lee finally finished his thoughts, telling the children his mom and dad always said if he made a mistake, he should dust off, say he’s sorry to anyone he hurt, and move forward.

His show included other messages in the form of music or rhymes, including following the rules, supporting the country’s service men and women, asking for help, and staying away from drugs, gangs and violence.

Lee said that, as he tours the country, he hopes to uplift his audiences through laughter while pointing them to learning and leading with love.

Lee has entertained audiences across the world. He’s crafted 36 TV episodes, 30 DVDs, nearly 10 CDs, and a number of children’s books and songs. For the past eight years, he has performed in nearly 500 shows per year, from schools to churches, festivals, camps, vacation Bible schools and more. He’s been to rural schools, and has also performed in major-metropolitan stadiums.

Want to know more about ventriloquist Dennis Lee and the Funky Monkey Bunch? Visit his website at www.dennisleeproductions.com.

The next summer reading program event will be Tuesday, June 29, featuring science fun in the “Mad Science” program at 10 a.m. and 1 p.m. at the Tahlequah Public Library.