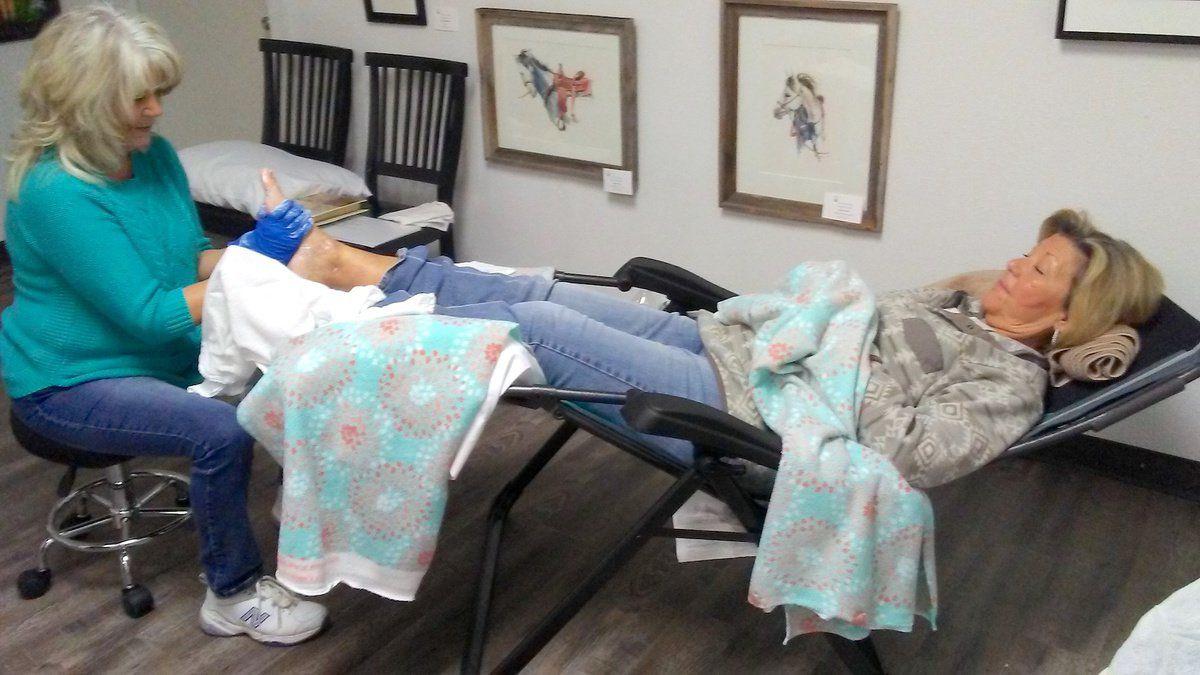 During a reflexology treatment, Debbie Rucker, right, relaxes as Denyce "Neicey" Dunham-Finch works on spots that are hard or tender on her feet o relieve stress. 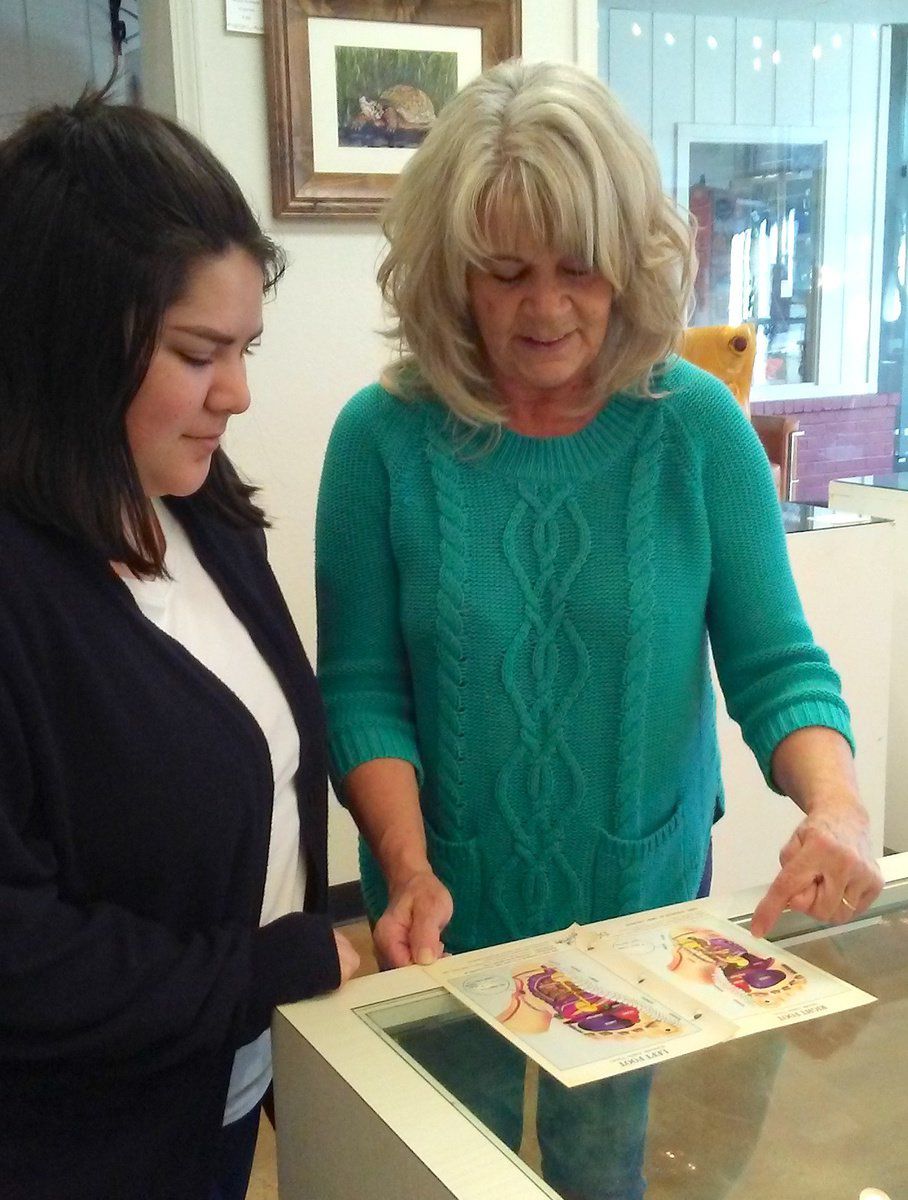 During a reflexology treatment, Debbie Rucker, right, relaxes as Denyce "Neicey" Dunham-Finch works on spots that are hard or tender on her feet o relieve stress.

Described by one client as feeling like "a big drink of sunshine," reflexology is similar to a massage, but it targets specific regions or zones of the foot and hand.

The practice has a long history of therapeutic uses dating back to Egypt and China, and today it is commonly used in holistic medicine. Denyce "Neicey" Dunham-Finch, a licensed nurse, is now sharing the relaxing effects with clients in the Cort Mall.

It's all about helping others feel good, said Dunham-Finch. And that, in turn, makes her feel good.

"I wanted the chance to help people manage pain and anxiety without having to take drugs," said Dunham-Finch. "I like to see people relax and get relief."

Reflexology is a science that works around the principle that there are reflex areas in people's hands and feet that correspond to all of the glands, organs and parts of the body.

"Stimulating these reflexes can prevent and relieve health issues and work toward your overall body maintenance, as well as combat stress," she said.

Reflexology stimulates the body's own pain-killing system. There are 7,000 nerve endings in the bottom of each foot, and stimulation of these nerve endings sends signals along to the spinal cord and up to the thalamus gland in the brain, which produces its own opiate-like painkillers called endorphins.

"It is the nervous system's reaction to this stimuli that begins the process of releasing painkillers from the brain into the blood stream to be distributed throughout the body. It works the same way to relieve stress and anxiety," Dunham-Finch said. "Modern research has confirmed a change in the brain waves by EEG [electroencephalogram] during stimulation, and supports the

idea that the cerebral structures are involved in the integration of the reflexologic impulse."

Client Debbie Rucker, who owns Jincy's, knows what matters is how good she feels afterward.

"I look at it as alternative medicine, and the effects lasted about three weeks," said Rucker.

She said she hasn't slept well in years, and after reflexology, she has been able to sleep through the night. She also enjoys the relaxed feeling she gets.

"You don't always realize how tense you are, but this feels like it's continually working on you, helping your body. Whether it's your joints or muscles, there's so much it helps," she said. "It's a mental and physical thing, like a big drink of sunshine."

Visiting Rucker from Tennessee, Barbara Cunningham wanted to try what her friend has been talking about.

"Debbie was telling me how good it felt to her and that it lasted two to three weeks," Cunningham said.

After an hour of having Dunham-Finch work on her feet, she was already making plans to find a reflexologist back home.

"My feet aren't sore now; they were sore on the bottom," Cunningham said. "It's so relaxing and takes a lot of stress away. I think everybody should try it."

It was more than 20 years ago that Dunham-Finch first studied reflexology at the White River School of Massage in Fayetteville, Arkansas. She recently completed an in-depth course with her original instructor, Linda Chollar, who now lives in California.

"Linda has conducted seminars nationwide along with Dr. J. Manzandares of Barcelona, Spain. His work involved a 20-year study of 70,000 patients after his interest was piqued because his grandmother was cured of a chronic rheumatic problem through reflexology treatments," she said.

In the 1980s, Dunham-Finch was hooked after her pregnant best friend had extremely painful hemorrhoids relieved with reflexology. After reading a magazine article about reflexology, she got a book from the library and worked on the area close to her heel.

"She didn't think the hemorrhoids went away, but they didn't hurt any more," said Dunham-Finch. "I got the books and the charts and practiced it for years on family and friends until Marnie Cope told me about the course at the White River School. As soon as I completed the course, I began practicing the whole routine, hot towels and all."

As many people do, Dunham-Finch has had several careers throughout her life, but music has always been part of it. With husband Joel Finch, and sister Debbie Duvall, the trio comprises Oklahoma Wildlife. She grew up in Tahlequah and lived in several places before coming right home, where she enjoyed a total of 20 years in real estate, owned and operated two day care centers, ran a restaurant, worked at the radio station, spent seven years in public relations at Go Ye Village, became a licensed nurse, and gained valuable experience in assisted living, home health, and hospice.

Finch is a land surveyor, and between the two of them, they have seven grown children.

"We love to play golf, walk in the fresh air, go camping, watch the stars, play instruments and sing harmony with our friends and my sister," she said.

Those musical hands can also create a sense of well-being and restores natural balance and harmony.

"If you are in pain or suffer from anxiety, insomnia, pain, or just have aching feet, reflexology could help. There are nerve endings in your toes connected to your eyesight, hearing, memory, mental processes, and sinuses," she said.

"You can do a lot for yourself, and I will show you where to massage to help relieve your own pain and stress," she said.

When she did weekly reflexology on the residents at Go Ye Village and people in their homes, most would be relaxed and happy when she left them, she said.

"I love that I can be the instrument to make people feel good," Dunham-Finch said.