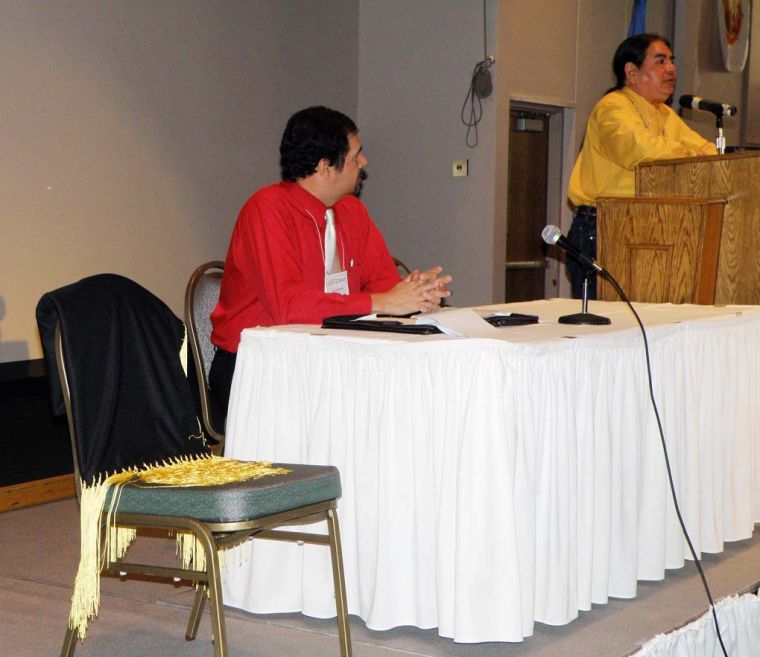 A chair draped with a black shawl represented the spirit of the late Wilma Mankiller Thursday during a panel on indigenous education in the 21st century, part of the 38th Annual Symposium on the American Indian at Northeastern State University. Among the participants were Dr. Les Hannah, seated, and Dr. Richard Allen. Mankiller, who died last week, was to have moderated the panel. 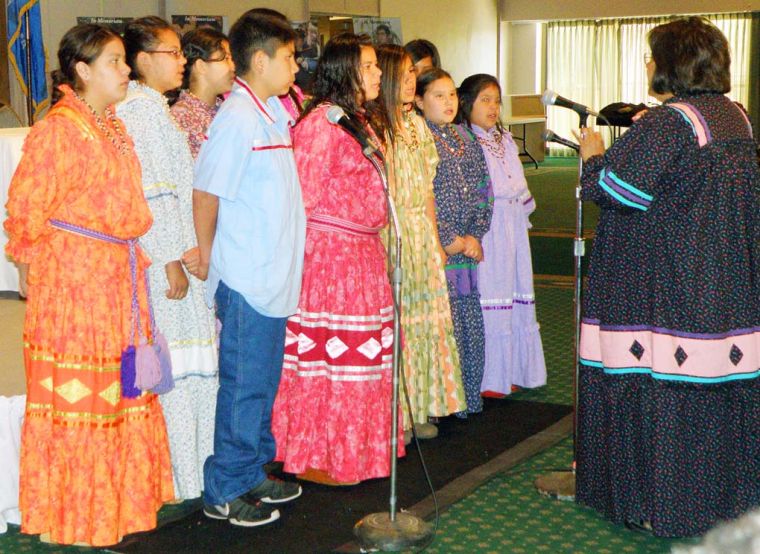 The Keetoowah Cherokee Youth Choir performed Thursday morning at the 38th Symposium on the American Indian at Northeastern State University.

A chair draped with a black shawl represented the spirit of the late Wilma Mankiller Thursday during a panel on indigenous education in the 21st century, part of the 38th Annual Symposium on the American Indian at Northeastern State University. Among the participants were Dr. Les Hannah, seated, and Dr. Richard Allen. Mankiller, who died last week, was to have moderated the panel.

The Keetoowah Cherokee Youth Choir performed Thursday morning at the 38th Symposium on the American Indian at Northeastern State University.

Seeds planted decades, even centuries ago in the fertile intellectual soil of northeastern Oklahoma, are beginning to bear flowers and fruit.

A panel Thursday at the 38th Annual Symposium on the American Indian at Northeastern State University focused on developing these seeds through indigenous education in the 21st century. The late Wilma Mankiller, former principal chief of the Cherokee Nation of Oklahoma and NSU’s first Sequoyah Fellow, had invited the panelists and had planned to moderate the session.

Although Mankiller succumbed to pancreatic cancer last week, her spiritual presence has been strong at this year’s symposium, which is dedicated to her. A black shawl memorializing her draped a chair on one side of the stage Thursday afternoon. On the opposite side hung portraits of Mankiller and three other influential people who died since the last symposium: Hastings Shade, former Cherokee deputy chief and Cherokee traditionalist; Dr. Brian Rader, longtime NSU professor of political science; and Roderick “Smoky” Gwoompi, educator and powwow dancer.

Mankiller had a vision for an advanced indigenous studies program at NSU, considered by many the oldest university west of the Mississippi and an exemplar of the Cherokees’ desire for education. In November, she met with a group, including the panelists, about her ideas for realizing this dream. She left an outline, which panelists pledged they will work to see accomplished here.

He said NSU has 2,600 native students, from about three dozen tribes, making it the largest population of Indian students of any university in the country. Allen originated that statistic in 1973, when Brigham Young University claimed to have the highest number of Indian students. He researched NSU’s records and found it surpassed the Utah institution.

“There’s a lot of spirit here,” Bread said as he looked out across the University Center’s Herb Rozell Ballroom. “You can sit here and use your imagination. ... Think of all the people who attended here in the past, who are looking in on us right now. ... This is where I find myself, as an activist — an academic activist and an Indian activist for our native people.”

Mankiller hoped eventually to see NSU offer a doctorate in indigenous, or Native American, studies, as well as in related fields, panelists said.

“I have been able to observe changes that have taken place at the university as they referred to native studies, American Indian studies,” said Fife, who joined the NSU faculty in 1987. “Indigenous is something that is more inclusive when we look at things in a global perspective.”

Mankiller spoke of indigenous studies, including native people from a global perspective, but she also was interested in Native American studies, panelists said.

They recalled their early days as students at NSU, when the American Indian Movement showed a strong presence locally and native people were beginning to demand their rights after years of repression and genocide.

Allen received his first degree from NSU in 1973, the year of the first symposium.

“I didn’t get to see much of the symposium. I was in a play called ‘Indians,’ which was across the street in the theater,” he said.

Over the years, the symposium attracted such native luminaries as Dee Brown, N. Scott Momaday, and Vine Deloria, all influential authors.

“We’ve had a wealth of scholarly people come here over the years,” Allen said.

That year he became one of three Indian counselors on campus. At the same time, Bread was general manager of the Tsa La Gi drama at the Cherokee Heritage Center.

Allen was troubled when students came to him, saying they were discouraged from majoring in native studies. Professors told them to get a “real major,” so they could get a job, that they didn’t consider the Indian studies program to be a valid major.

“There was a professor here who taught art. He told them native art wasn’t valid,” Allen said.

But NSU has offered Cherokee language and native history classes since the 1960s, and offers degrees in Native American studies and Cherokee language. The university needs a formalization to bring together all the qualities it has to offer, Allen said.

“These are the things, I think, that Chief Mankiller brought us here to discuss,” he said. “It was her idea that NSU could become the premiere university in Native American studies. There would have been more meetings.”

Allen and Bread talked of how members of different tribes came together at that time, in the late 1960s and the early 1970s.

The panel, which involved members of Cherokee, Muscogee Creek and Kiowa descent, exemplified that period of learning about one another.

Both groups would gather at the river. Plains tribes members performed powwow dances and the traditional “49” parties that accompanied them. Students from the Five Civilized Tribes lighted bonfires and stomp danced around them. They introduced one another to their respective traditions.

Bread recalled how Charlie Soap, who later married Mankiller, was introduced in those days to the powwow circle and became a renowned fancy dancer.

The cooperation that developed then can continue today to carry indigenous education to new levels, panelists said.

“Technology is enabling us every day with better ways to look at the past,” Fife said. “As we try to revitalize our language and as we put it into practice, technology is a tool that we can use.”

She said NSU started its Cherokee language program with very little to work with, but has assembled a group of students, through the Center for Tribal Studies, into a think tank.

Hannah said he hopes to bring together a group of accomplished Cherokee speakers and record them as they talk about current-day issues, using technology to link to tribal culture.

“We have a great wealth we bring with us. Students have always motivated the movements that have taken place on this campus and always will in the future,” Fife said.

Hannah told how he came to NSU as an angry young man from Pumpkin Hollow, and left it prepared for a career with a global perspective.

“I got here to NSU as an angry young Cherokee man and got involved with some faculty who helped shape me into the man I became,” he said.

These professors helped him turn his anger into a passion.

“What can you do with a degree in native studies? You can change the world,” he said. “That’s what I’m here for today – to help change the world, one young Native American student at a time, one classroom at a time.”

From his beginnings at NSU, he has lectured at Oxford University in England and has addressed world leaders at the G8 meeting. This fall, he will visit northern Europe as a Fulbright scholar.

He challenged the group to accomplish the vision Mankiller laid out, to tend the seeds she planted.

“Find a way to make it happen — the Wilma P. Mankiller School of Indigenous Studies here at NSU,” he said.

“These are dreams, but every reality starts somewhere, usually with a dream. Come help us change the world.”

What’s next
The 38th Annual Symposium on the American Indian will continue Friday at Northeastern State University. Activities from 9 a.m. to 4 p.m. will feature speeches, discussions, arts and crafts, and a luncheon. A complete schedule is available at the registration area in the University Center. The annual powwow will be held from 6 to 10 p.m. Friday and 1 p.m. to midnight Saturday in the Rozell Ballroom, second floor of the University Center. All events are free to the public.