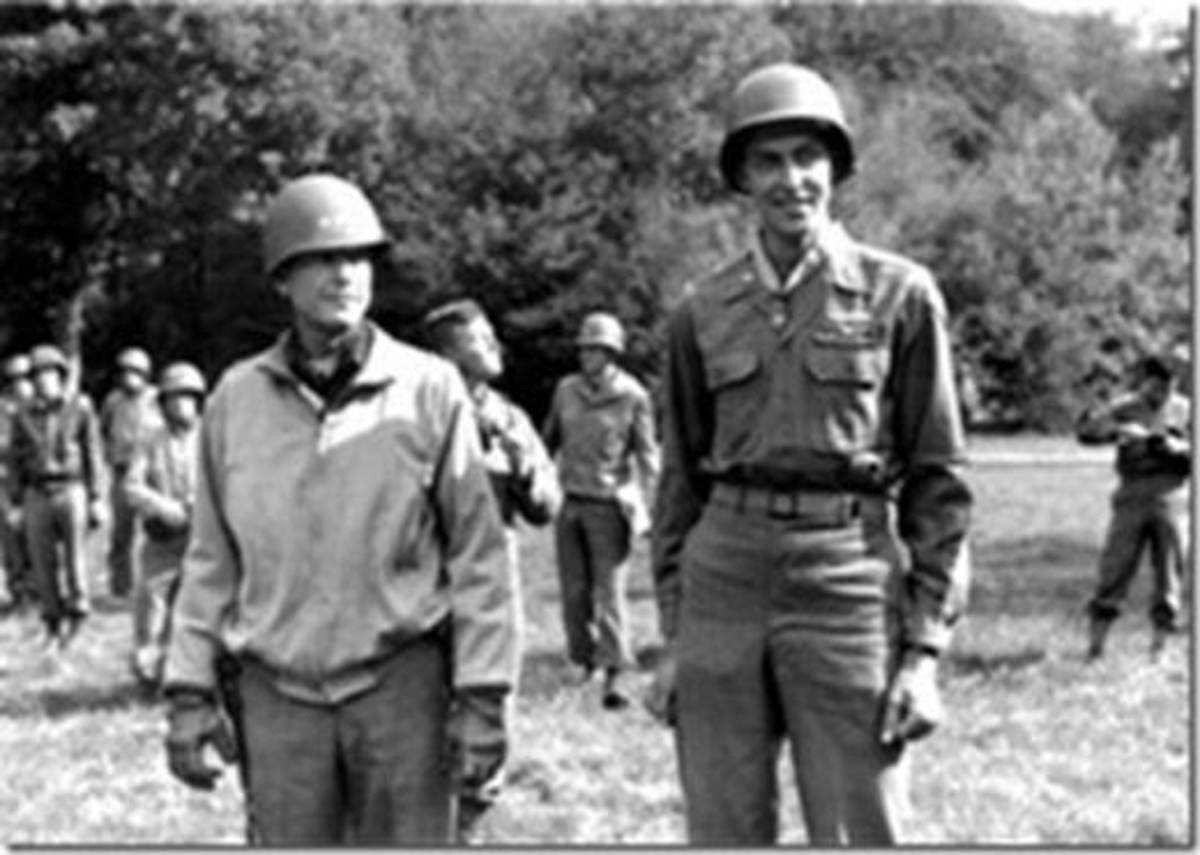 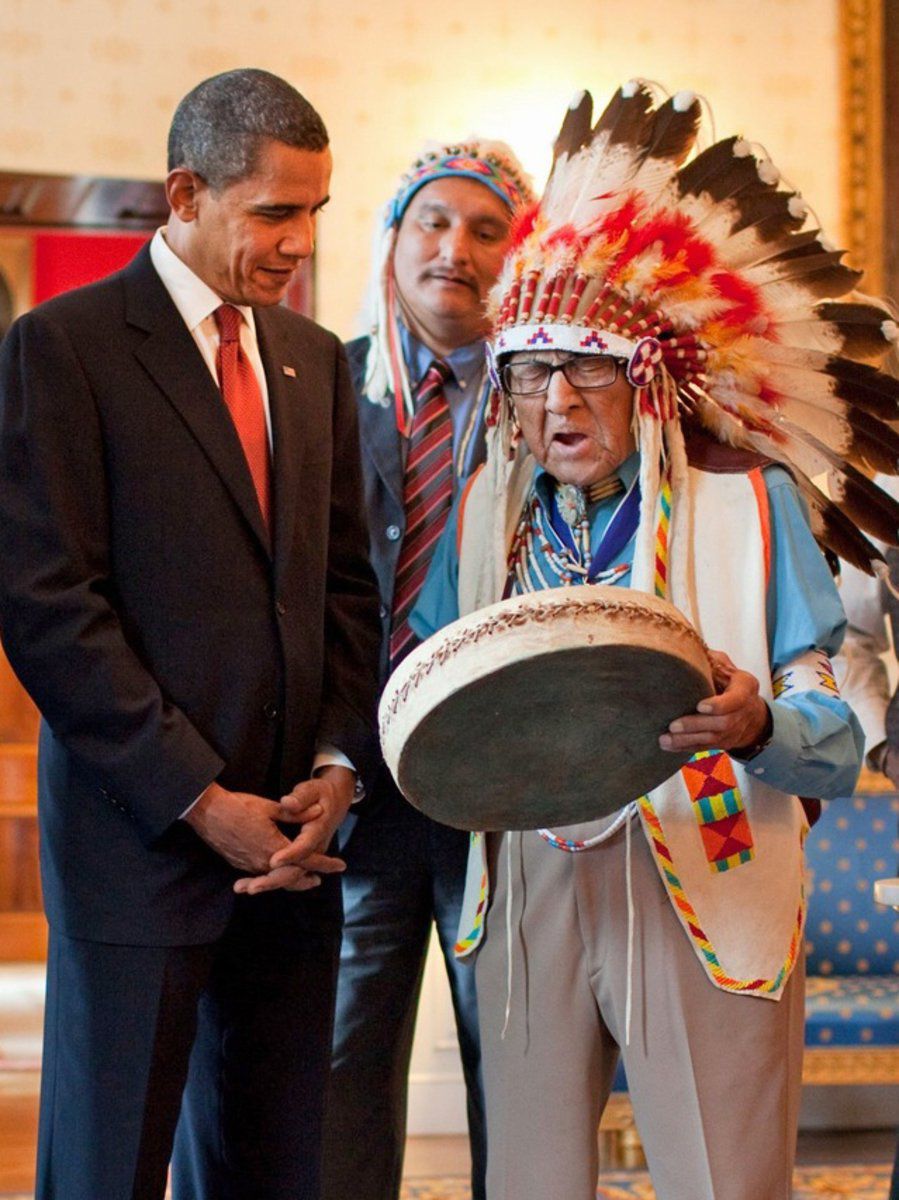 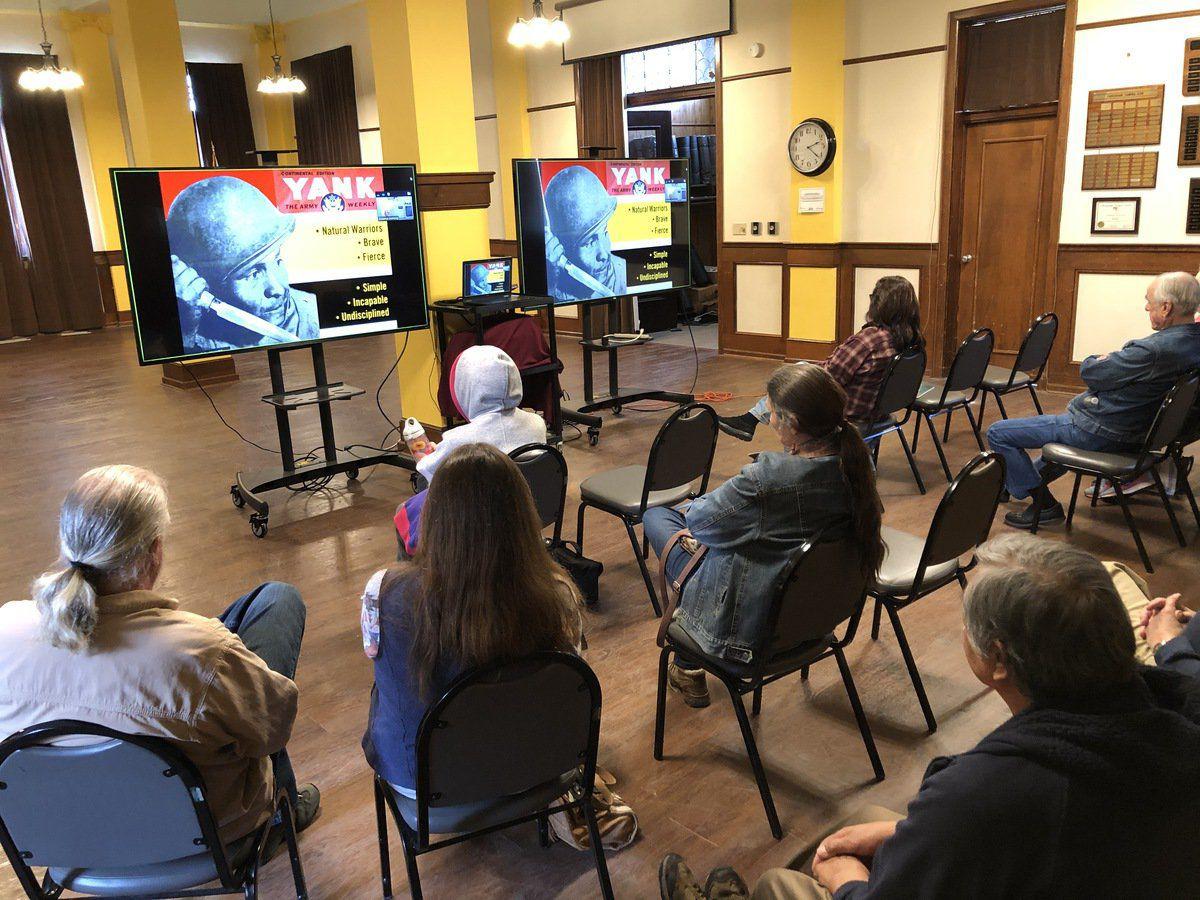 With Oklahoma being the home to a large population of Native Americans, it seems appropriate that the National World War II Museum in New Orleans decided to present a distance learning program - "Continuing the Warrior Tradition: American Indians in World War II" - for patrons of the Tahlequah Public Library.

Distance Learning Specialist Kate Fitzgerald hosted the live presentation Wednesday, when she gave an overview of American Indians' participation in the U.S. military and their experiences during WWII. The beginning of the presentation included the United State's decision to enter the war, as well as a segment of President Franklin D. Roosevelt's famous "Infamy Speech" that he gave a day after the attack on Pearl Harbor. Fitzgerald then showed a picture of an old American Indian rug that contained symbols that appear to be swastikas.

"For years - decades before the Nazis decided to use this symbol - it was used in a lot of cultures - a lot of American Indian cultures, but a lot of cultures in southeast Asia, as well," she said. "This symbol appears all over the place. For example, in the Navajo culture it meant 'good luck.'"

Whenever WWII began and people started to associate the symbol with Nazi Germany, it led many of the tribes to discontinue the use of the symbol. Fitzgerald said Adolf Hitler once had the idea that tribes might actually take up his cause and fight the U.S. government from within.

"So that never happened, but most people also don't know that many tribes themselves declared war on Germany," she said. "So in addition to distancing themselves from the Axis powers by stopping to use that symbol, they went a step further."

The collective stance of tribes to condemn Nazi Germany led many Native Americans to register for the draft. Fitzgerald said 99 percent of natives who were eligible for the draft had already registered - the highest percentage of any other ethnic group in the country. Many of them registered because they wanted to defend their homeland, but also were in need of a steady paycheck, which the military could provide.

Fitzgerald shared one story of Joe Medicine Crow, who was the last Crow war chief and was awarded the Presidential Medal of Freedom in 2009. According to the Crow Nation, to become a war chief someone must touch an enemy without killing them, take an enemy's weapon, lead a successful war party and survive it, and steal an enemy's horse.

"It was basically a dying breed," she said. "There weren't any war chiefs being made because there wasn't really an opportunity to. So without even realizing what he was doing, he enlisted in the Army and Joe Medicine Crow ends up overseas."

After leading a seven-man squad to place explosives along the Siegfried Line, knocking a German soldier's gun from his hands during a fight in which Crow eventually let the man go, and successfully stealing the horse of a Nazi while simultaneously releasing roughly 49 more, he had achieved all of the requirements to become a war chief. In an oral history video by the National WWII Museum, Crow jokingly said that day he had become "a famous war thief."

Another American Indian recognized in the presentation was Van Barfoot, who was a Choctaw Indian from Mississippi. He once eliminated a German machine gun nest, killing eight soldiers and capturing another 17. Later that day he used a bazooka to disable a German tank, which caused two other tanks to change direction and be destroyed. That day he also set a demolition charge destroying an artillery piece, before helping wounded U.S. soldiers return to safety.

While serving in France, Barfoot was informed that he'd been awarded the Medal of Honor. Fitzgerald said that in the interviews of four men who served underneath Barfoot, they all spoke about the fact that he refused to return to the U.S. for a White House ceremony to accept the award.

"He could have left the campaign, gone home and basically taken a break for this ceremony," said Fitzgerald. "But instead, he decides to receive it right on the battlefield and continue on, pretty much like nothing ever happened, and that really stuck with the men that worked underneath him."

The presentation entailed a variety of other American Indians who served during World War II. For more information about the National World War II Museum in New Orleans and its distance learning programs, visit nationalww2museum.org.