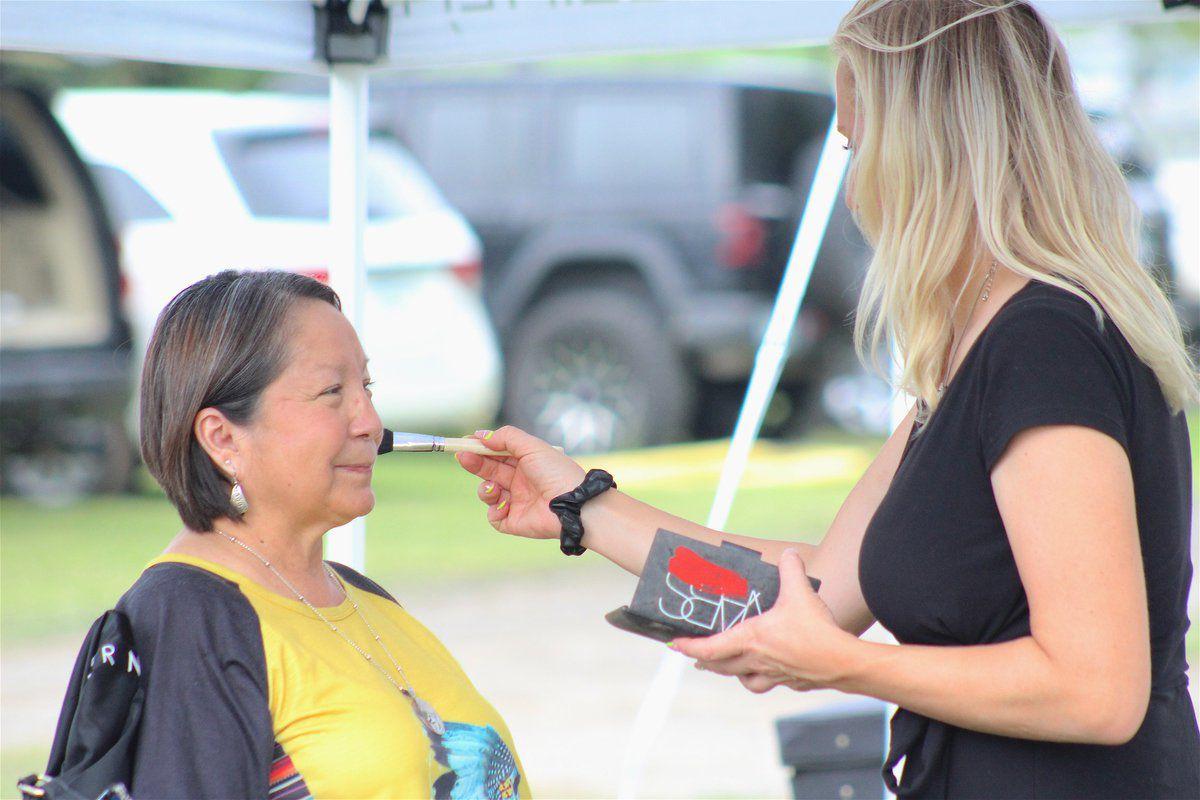 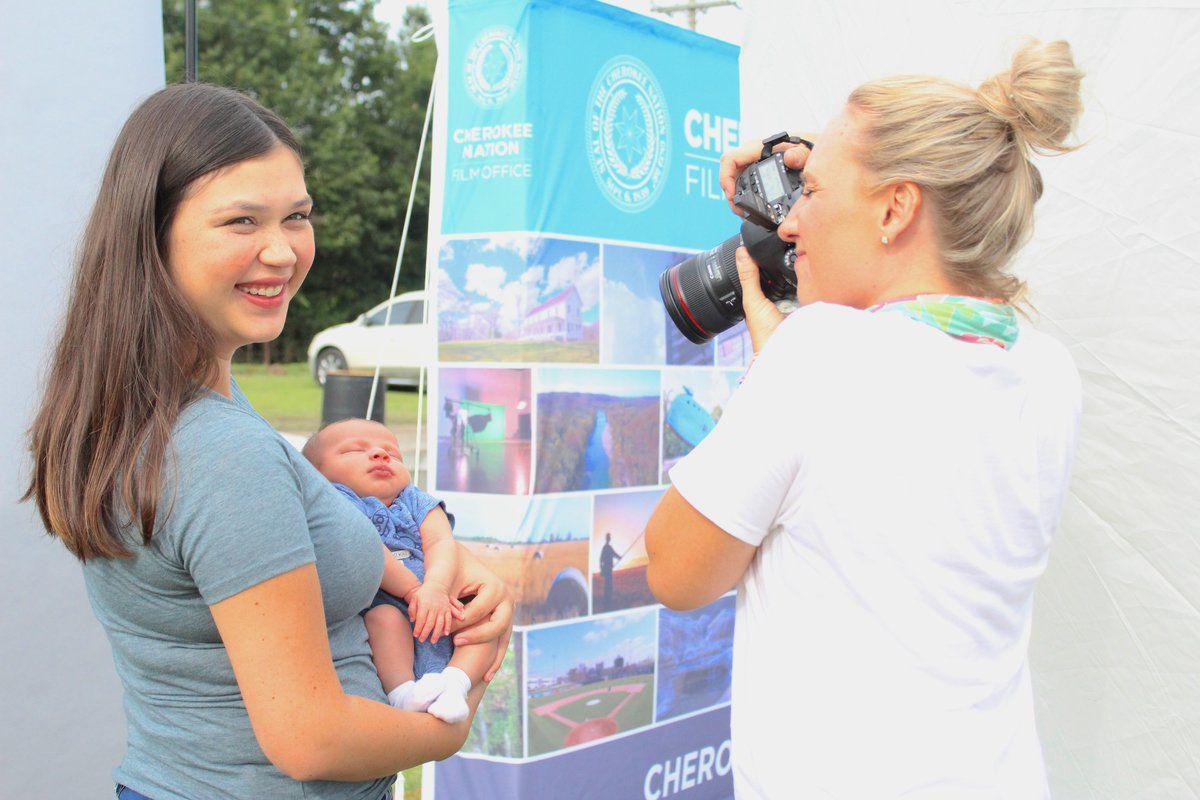 Danya Pigeon, left, holds Michael Locust to have his photo taken at the Cherokee Nation Film Office, to be included in a Native American talent and film crew database.

Danya Pigeon, left, holds Michael Locust to have his photo taken at the Cherokee Nation Film Office, to be included in a Native American talent and film crew database.

The next big star could be discovered this weekend during the 67th Annual Cherokee National Holiday, as the Cherokee Nation Film Office is signing up actors to be included in a Native American talent and crew database for filmmakers.

"We hear the complaints in the Native film industry loud and clear, and we just feel like we're positioned in the perfect place to say, 'You know what? Let's create a Native American talent and crew database and see what we can do to help solve this problem," said Loren.

There currently is no database for Native American film talent or crews, so this is a first. It's also the first time the tribe has hosted such a signup. Within minutes of opening, the booth at the Cherokee Nation Cultural Grounds already had several tribal citizens sign up for initiative. They stopped to get their makeup done and have their head shots taken for free.

"I wanted to be an extra," said Lahoma Schultz. "I really wanted my grandson to be an extra, but he couldn't show up. I can just be silly and I can do whatever needs to be done. I'd just like to be in a film."

People are encouraged to share some hobbies or special skills they might have, such has tap dancing, combat training, a familiarity with firearms, or any other specialty a filmmaker might need.

Vicki Whitworth signed up on the database and shared that she can ride a horse and shoot a gun. Should she get a call, it wouldn't be her first time on a film set, as she was an extra for two movies: "August: Osage County," and "To the Wonder."

Whitworth said "it was kind of weird" to see herself in a movie and that she also got to meet a Hollywood super-star.

"It was kind of neat, because [Julia Roberts] came out and we got to meet her," she said.

Whitworth also said she wouldn't mind having a line or two in an upcoming film.

The chances are very good that someone who enrolls will be featured in a film, according to Loren. The CN Film Office has already been in contact with executive of more than 20 movies interested in finding a Native cast.

A recent bill signed by Oklahoma Gov. Kevin Stitt expanded the Oklahoma Film Enhancement Rebate Program to give filmmakers bigger incentives. That's one reason why they're coming to the state for productions.

"People were already interested in filming their films in Oklahoma, but when they doubled that this year in the Legislature, they became inundated with film projects," said Loren. "We just started our film office in January right before all of that happened, so we really feel like we hit it at a great time."

Not only could budding actors see their faces on the big screen, there's a chance they could land small roles.

Loren said filmmakers often have a large list of expenses, so if there is an opportunity to find a local actor who will help save money, they'll "jump on it."

"A lot of times when films come into towns, it's possible they'll have their lead actors already attached to the films, but they will need background actors or extras," she said. "They'll need those, but they'll also need people who will play smaller roles. They do look for local people for those roles, because film-making is like any business - about the bottom dollar."

Not only is the Cherokee Nation Film Office trying to promote Cherokees and Native Americans in general, it also is hoping to use this initiative as an economic development tool.

"When you have a conference that comes into town, they eat in your restaurants; they shop in your shops," said Loren. "We are hoping to bring filmmakers down, because when they come, they bring their crews. Their crews will stay in your hotels and they'll do all of the things that other people do."

Area residents can sign up for the database as actors, extras, film crews, or as local businesses. Oftentimes, film crews need resources, and the CNFO can direct them to local Native businesses for whatever they may need.

Jeff Nicholson, an acupuncturist in Tahlequah, offered his services to any nervous performers.

"I wanted to help them," said Nicholson. "They're under stress. They don't make much money. They have to make a living. It's scary to give anybody your information, but I've been in Tahlequah for 35 years on Main Street, so I'm available to the public. It doesn't matter who knows me."

The Cherokee Nation Film Office will continue signing people up for its database and giving free makeovers and head shots throughout the Holiday. The public can sign up at the Cherokee National Capitol Square, 101 S. Muskogee Ave., from 9 a.m. to 2 p.m. on Saturday. On Sunday, the group will be at the new Cherokee Casino Chota Conference Center, 3307 Seven Clans Ave., from 9 a.m. to 2 p.m.

On Sunday, Loren said, a couple of filmmakers will be on site who are looking for Natives to be in their documentary about the Goingsnake Massacre, and will hold auditions in the Cherokee Nation Film Office booth space. Either way, the CNFO's mission could create an increase in Native talent on the big screen.

"We want to hand them these databases and say, 'OK, you don't have any excuses anymore,'" said Loren.