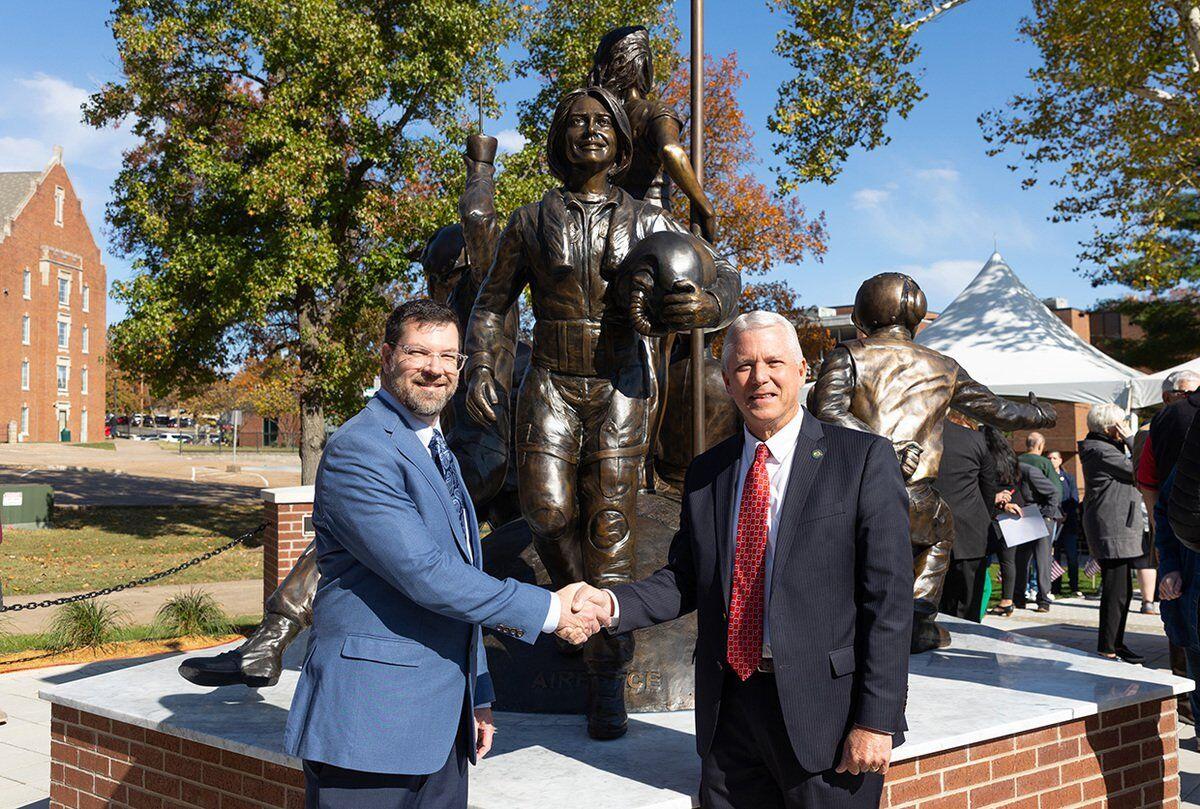 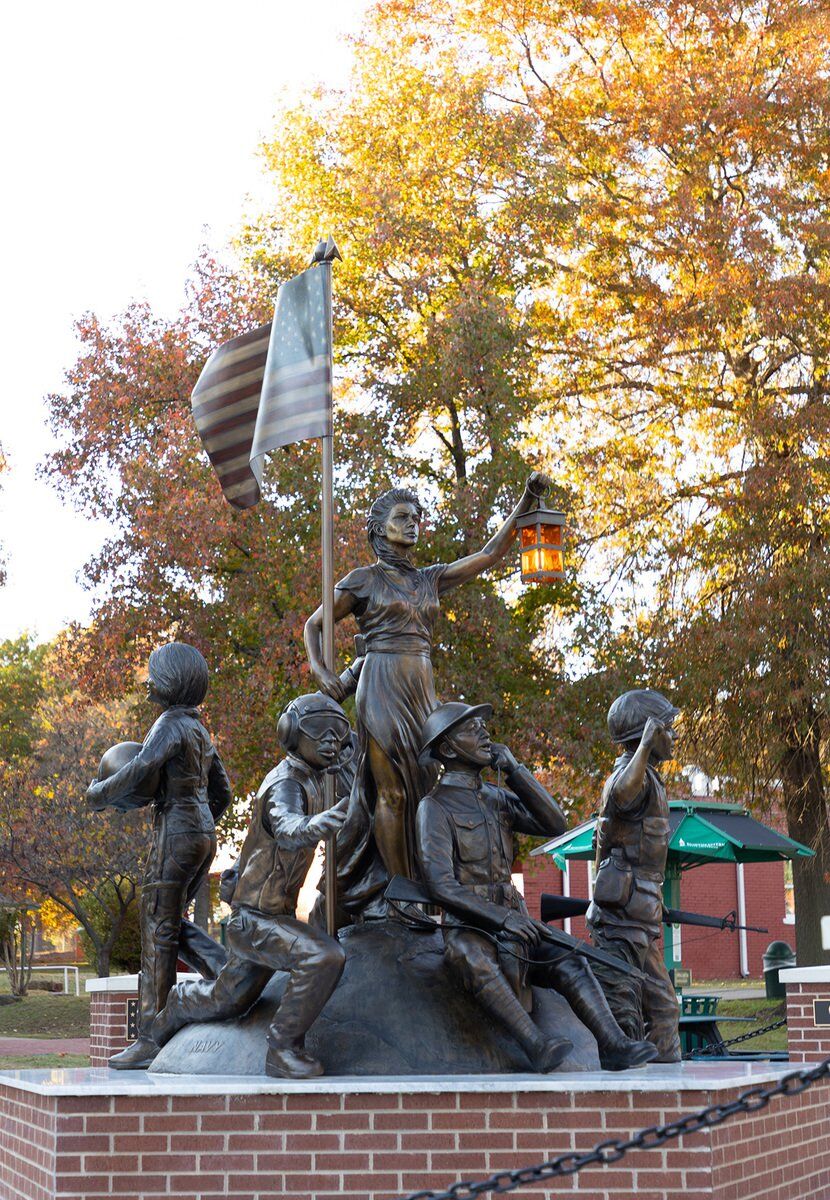 NSU Veterans Monument: NSU unveiled a new monument titled “NSU Veterans: Serving and Communicating through the Decades" on Veterans Day. The monument was created by Oklahoma Sculptor Joel Randell and is located east of Seminary Hall on the NSU Tahlequah campus.

NSU Veterans Monument: NSU unveiled a new monument titled “NSU Veterans: Serving and Communicating through the Decades" on Veterans Day. The monument was created by Oklahoma Sculptor Joel Randell and is located east of Seminary Hall on the NSU Tahlequah campus.

A larger-than-life bronze monument honoring the nation’s veterans was unveiled on the Northeastern State University Tahlequah campus on Veterans Day.

On Thursday, veterans, legislators, higher education officials and the public gathered east of Seminary Hall to mark this year’s Veterans Day and unveil the new “NSU Veterans: Serving and Communicating Through the Decades” monument and plaza.

Oklahoma National Guard Director of Joint Staff and NSU alumnus Brig. Gen. Jon Harrison said it is appropriate to be celebrating Veterans Day at NSU and to dedicate the new veterans monument and plaza.

“We are gathered to convey our nation’s gratitude for those who risked their lives for the land, the people and the ideals they love,” Harrison said during Thursday’s ceremony. “Today, here in Tahlequah, we come together to honor and recognize all of our American service members past and present and salute them for their service to our country both in uniform and out.”

NSU President Steve Turner said students, faculty and staff of NSU have always responded when the nation called, adding today there are close to 300 veterans and their family members enrolled at the institution. He said the university is proud of its veterans and that led to conversations about what can be done to portray this pride.

“Based on NSU’s history of military involvement it is fitting to dedicate this monument as a permanent and visual way to say thank you to veterans of the past, present and future,” Turner said.

Standing at around 12-feet tall the new veterans monument designed and sculpted by Oklahoma sculptor Joel Randell, is comprised of six bronze figures arranged on a representation of the world. Randell’s design was chosen after a specially appointed presidential committee reviewed a number of submissions.

Provost and Vice President for Academic Affairs Dr. Debbie Landry said while the committee was formed in 2018, the conversation about having a monument like this on campus started long before that. Landry, who is a retired Marine, said in doing some research for NSU’s veteran centers and lounges it was discovered that throughout NSU's history many students and employees have answered the call.

Randell said each branch of the U.S. Armed Forces are represented and the arrangement of the figures on the world signifies the United States’ widespread role throughout history.

A modern-day female officer represents the Airforce as part of the monument. She is shown walking with a flight helmet in hand having successfully completed another mission. Randell said in terms of rank she is also the highest-ranking officer on the monument.

The U.S. Coast Guard is also represented by a modern-day service member. He is depicted as being lowered from helicopter by cable, in a heroic effort to save someone from peril in the ocean.

At the center of the monument, representing the home front and national guard, is a woman carrying the American flag and holding a lamp high as a guide for the way home. At the top of the flag, Randell said, is a symbol to represent the newest branch of the military, the Space Force.

Randell said the lantern will also be lit at night. He added he chose some amber lenses for the lantern to give a nice warm glow.

Principal Chief of the Cherokee Nation Chuck Hoskin Jr. said he particularly likes this monument because it’s not memorializing a single person who proved themselves in the field of battle but it is depicting a collective of people who have fought for this country in different branches and from different walks of life.

“There are values around which we can and should rally and when people come to this monument, they will be filled, I think, with a sense of pride and an opportunity to reflect not on an individual military hero, but on the collective effort to protect freedom and secure peace,” Hoskin said.

“Our time and efforts are never wasted when we recognize and honor our veterans and the men and women currently serving in the armed forces,” Randell said. “My hope is that this monument will likewise inspire young men and women to also serve and communicate down through the ages to come.”