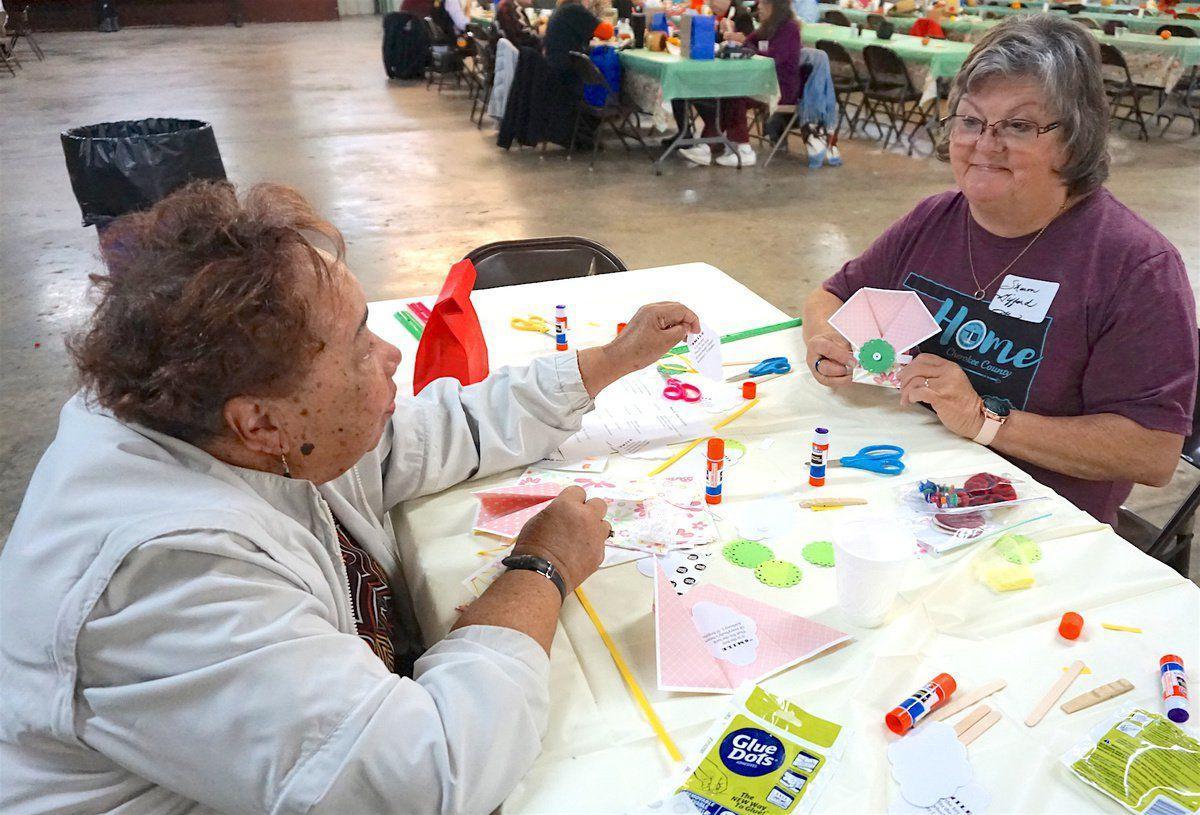 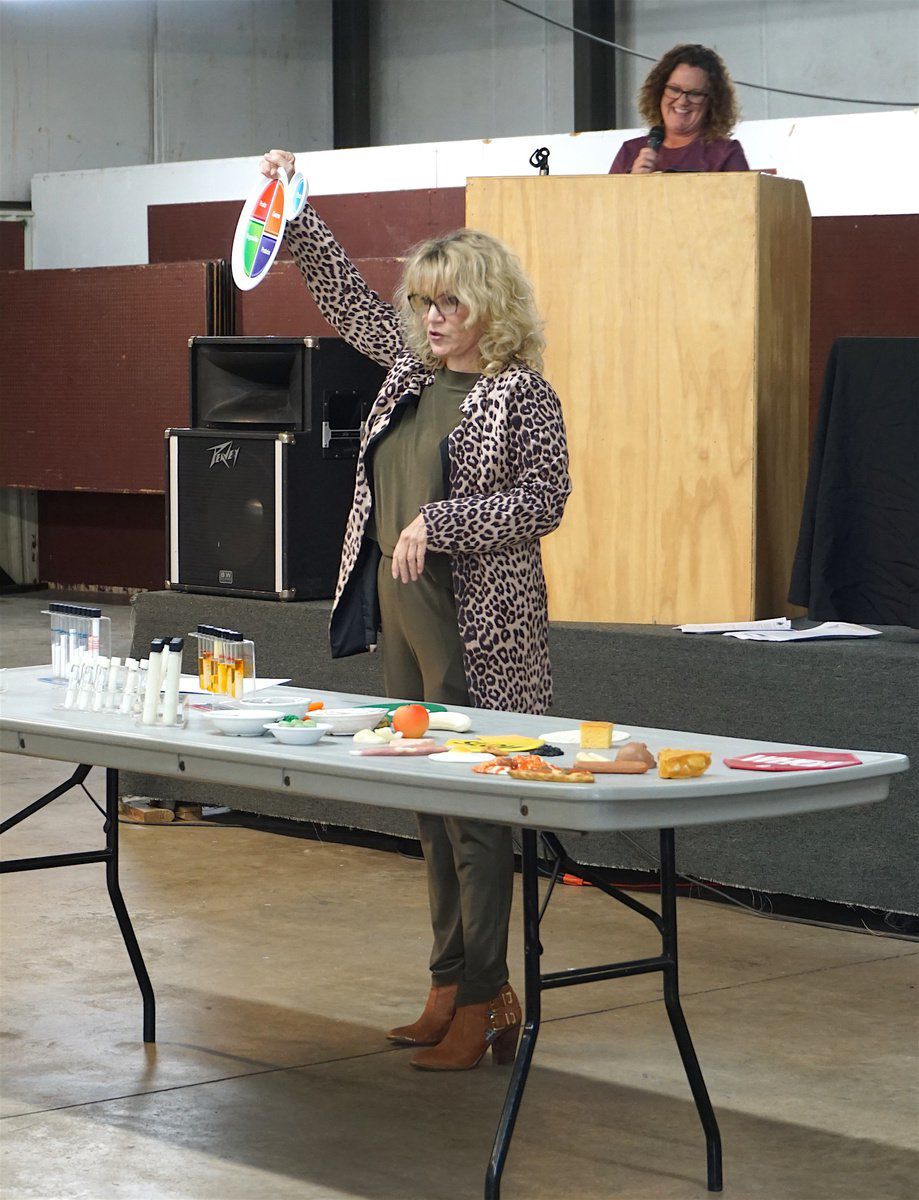 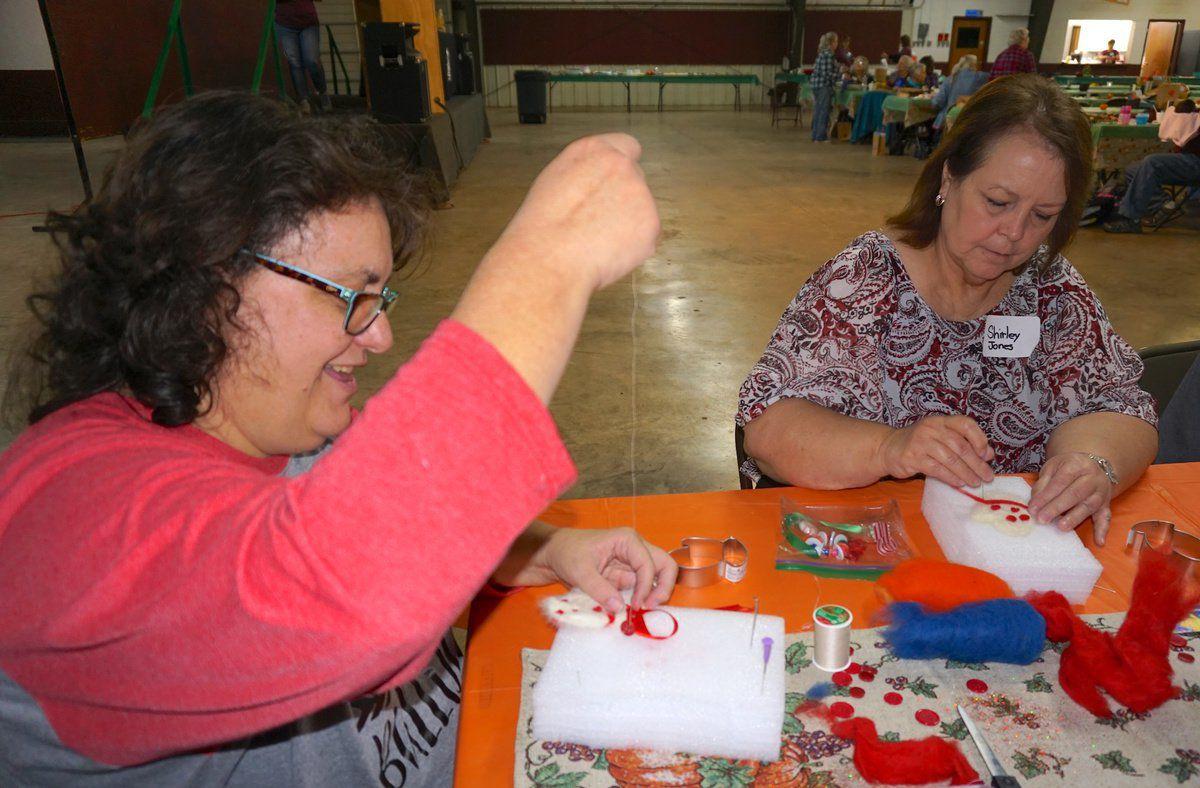 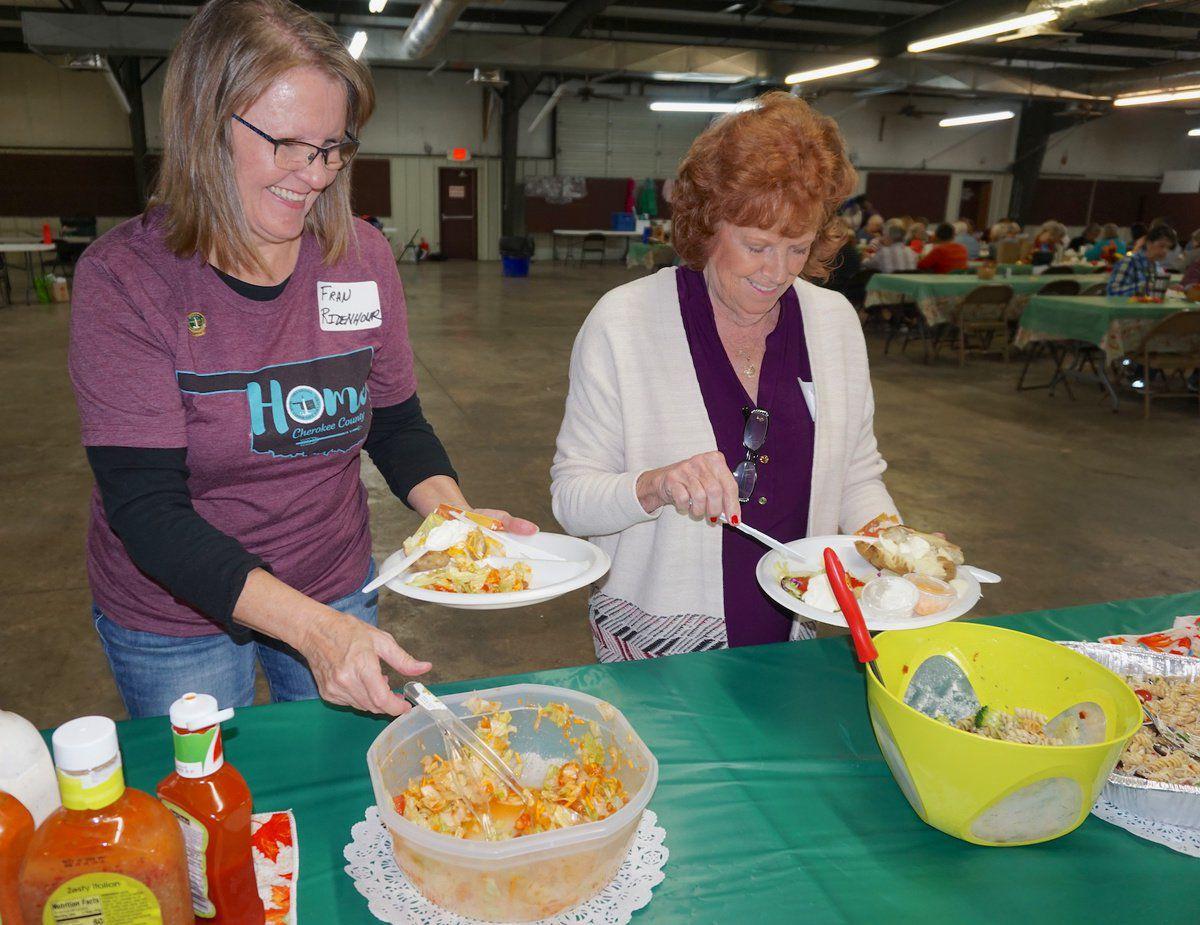 Woodall OHCE Club member Fran Ridenhour, left, and Edie Clarkson, with the Wagoner County In Towners Club, help themselves to a lunch of baked potatoes and various salads during the OHCE Fall Extravaganza Thursday in the Cherokee County Community Building.

Woodall OHCE Club member Fran Ridenhour, left, and Edie Clarkson, with the Wagoner County In Towners Club, help themselves to a lunch of baked potatoes and various salads during the OHCE Fall Extravaganza Thursday in the Cherokee County Community Building.

Ten OHCE groups came from five counties: Cherokee, Muskogee, Okmulgee, Sequoyah, and Wagoner. The annual event rotates through the counties, and next year it will be in Muskogee County.

A continental breakfast, featuring an array of sweet breads, was available to attendees as they arrived and registered. Over 70 OHCE members signed up for the event, but not all were able to come.

"We register for this months in advance, and things do come up," said Laura Embry of the Okmulgee County Prairie Bell Club. "There's a lot of planning that goes into this. You have to know how many are going to come so you know how much food to prepare and kits to bring."

A welcome message was given while make-and-take craft stations were set up. Each group had brought a craft project, so members made items to keep, and learned new skills.

Four demonstrations were given to the entire group: winter warmth with fleece, personalized tissue box covers, a vegetable "tree," and kitchen towel belts. The vegetable tree reappeared during lunch, so attendees could eat the broccoli and tomatoes that had been stuck with toothpicks into a Styrofoam base.

Members had an hour and a half for make-and-take projects, rotating through the tables. A few of the activities were Christmas-themed, including a needle-felted Christmas ornament with roving, and a wreath made from buttons and beads on a chenille stem.

"They are felting wool, which is pretty cool," said Winn. "It's not only a craft, but it's a historical thing. And, if they have a hole in a sweater, they can fix it with this technique."

A make-and-take offered by the Sallisaw group was good for giving or eating. Members had mixed the dry ingredients for chocolate chip cookies and measured it out into little cups that each contained just enough for one cookie. Participants would then put a baggie into a tin can - so it would stay upright - and put the dry ingredients and chocolate chips into it. This was tied with a bow that held the cooking instructions on it.

"We always have a good time at these," said Gayla Guthrie of a Sallisaw club.

Marie Jones with the Okmulgee County Crochet Club showed others how to make a "easy, fancy folded card."

Jones said that was a good thing about these events.

"Most of us belong to other organizations and we take what we learn back to our clubs," she said. "I've been doing this since I've been in Crochet Club, which is about 13 years. It gives an opportunity to have fun and let the steam out, and socialize. It's a good learning experience."

One group offered the craft of making decorative snowmen out of salt and pepper shakers.

Attendees could make stress balls from balloons filled with rice. The yellow balloons already had smiley faces printed on them, but crafters were encouraged to make ghosts or jack-o'-lanterns by drawing faces on white or orange balloons.

"They are good for stress or arthritis," said Shirley Jones of the Woodall club.

This is Jones' first year in OHCE, and she is enjoying it.

"I joined a group I knew people in, but I have met a lot of new people," said Jones. "It fills my time."

After lunch came a presentation on Heart Health by OSU Extension family and consumer science educators Janis Risley, over Muskogee and Wagoner counties, and Winn.

They discussed a handout, "Diet & Heart Disease," and outlined measures to reduce risks and dietary recommendations.

"Some factors we cannot change are heredity, gender, family history, and the aging process. We can control high blood pressure, diabetes, smoking, and our diets," said Winn.

The heart health program was the state OHCE program for the year, according to Winn.

Door prizes were given at the end.