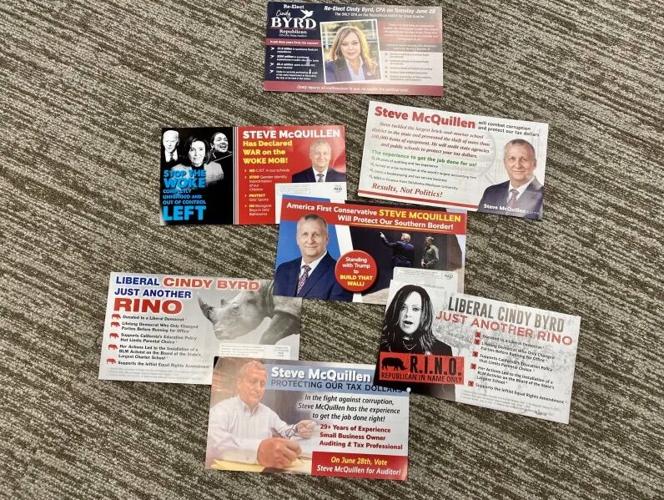 Some of the direct mail pieces sent to Republican voters in the race for state auditor and inspector ahead of Oklahoma's June 28, 2022, primary election.

Some of the direct mail pieces sent to Republican voters in the race for state auditor and inspector ahead of Oklahoma's June 28, 2022, primary election.

Spending on state political campaigns by outside groups is approaching $10 million in June as Oklahomans go to the polls on Tuesday in the primary election.

The independent expenditures are allowed to be spent in unlimited amounts as long as they are not coordinated with campaigns. But who or what organizations are donating money for the expenditures largely remains a secret because of state and federal campaign finance laws.

The unlimited nature of independent expenditures on races stands in contrast to fundraising by candidates. Oklahoma campaign finance laws limit individual donations to candidate committees to $2,900 per election and political action committee donations to $5,000 per election. But committees formed for independent expenditures or electioneering face no limits in raising money from individuals or other groups.

On Monday, the Oklahoma Project, which was formed last year, reported spending almost $719,000 on TV and online ads against Republican incumbent Gov. Kevin Stitt, who faces three challengers in the GOP primary.

Other outside groups, including the Oklahoma Conservative Patriots Alliance and the Hometown Freedom Action Network, spent more than $368,000 running anti-Stitt ads in June, according to reports filed with the state Ethics Commission. The Patriots Alliance group and the Battle Ready PAC have spent more than $700,000 on ads supporting GOP gubernatorial candidate Joel Kintsel. By comparison, Stitt’s own campaign has raised $4.68 million for his 2022 re-election campaign. Stitt has raised the most among all candidates so far this election cycle.

“It’s hard to feel bad for the big-money special interest groups getting ripped off by their consultants when they peddle lies with ineffective garbage and negative ads,” said Donelle Harder, Stitt’s campaign manager. “Wasn’t it Shakespeare who said the anonymous accuser is always a liar?”

Meanwhile, Steve McQuillen, a little-known Republican candidate for state auditor and inspector, has raised just $1,300 for his own campaign. But several political action committees have spent big on independent expenditures in the race. The committees, American Values First and Truth PAC, have reported more than $638,000 in expenditures for TV and radio ads and direct mail supporting McQuillen or opposing Republican incumbent Auditor Cindy Byrd.

That spending led former Auditor Gary Jones and Ken Warner, chair of the Oklahoma County Republican Party, to call on Friday for McQuillen to drop out of the race. They said some of the so-called dark-money spending could be traced to the founders of Epic Charter Schools, who were charged last week along with a former chief financial officer after a years-long investigation by the Oklahoma State Bureau of Investigation and multiple audits by Byrd’s office.

Jones said the rapid rise in spending on independent expenditures in Oklahoma is a threat to elections. He faulted the Legislature for gutting Ethics Commission rules and his own party for its complicity.

“What we’re seeing is not straw donors but a straw candidate,” Jones said. “The Steve McQuillen you see in all the ads does not exist. He is simply a name on a ballot.”

Jones said he wants the Legislature to tighten up ethics rules to curtail dark money. Barring that, he said there’s support to put a state question before voters giving additional enforcement power to the Ethics Commission.

“Because you have these independent expenditures, you have these people that hide the money. They’re cowards, and they don’t want to tell you that they’re contributing money for or against this candidate,” Jones said. “So they hide it in these dark groups and you can’t find out who it is.”

Other competitive Republican primary races have seen hundreds of thousands of dollars in independent expenditures. More than $600,000 in outside money was spent in June on Ryan Walters’ race for superintendent of public instruction, with more than $420,000 spent on ads opposing him.

Walters’ campaign itself has raised $249,000 through June 21, according to filings at the Ethics Commission. Fellow GOP opponent April Grace raised almost $300,000 so far, while John Cox raised $188,000. The other Republican candidate in the race, William Crozier, reported just $1,060 in donations, all of it from himself.

In the Republican race for attorney general, independent expenditures topped $1.6 million in June. More than $1 million of those expenditures have gone to TV, radio and digital ads opposing incumbent Attorney General John O’Connor, who was appointed by Stitt last summer. He faces attorney and banker Gentner Drummond in Tuesday’s primary.