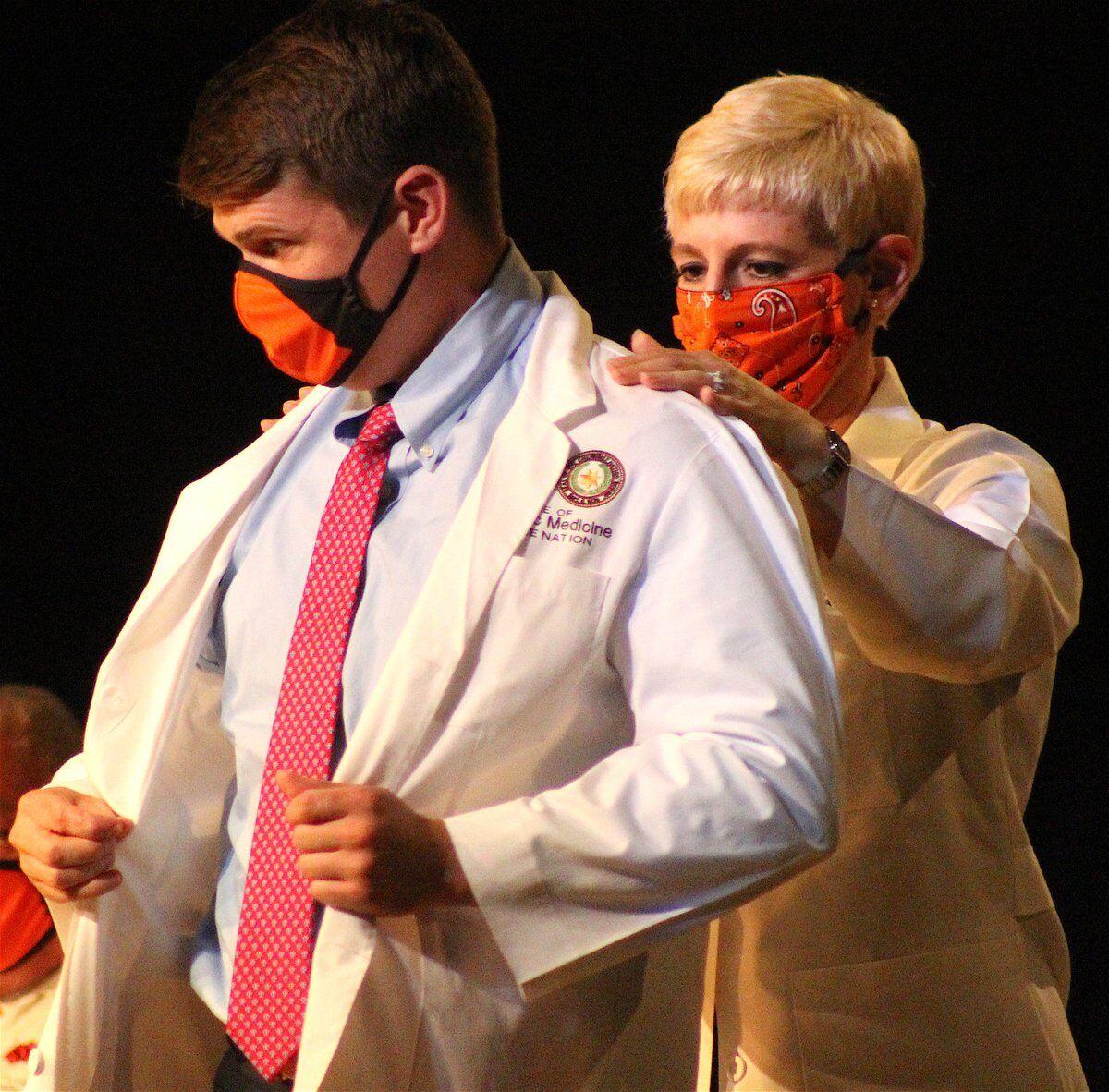 Cooper Anderson, left, receives his white coat from Dr. Natasha Bray during a ceremony for the first 54 students of the Oklahoma State University College of Osteopathic Medicine at the Cherokee Nation in Tahlequah. 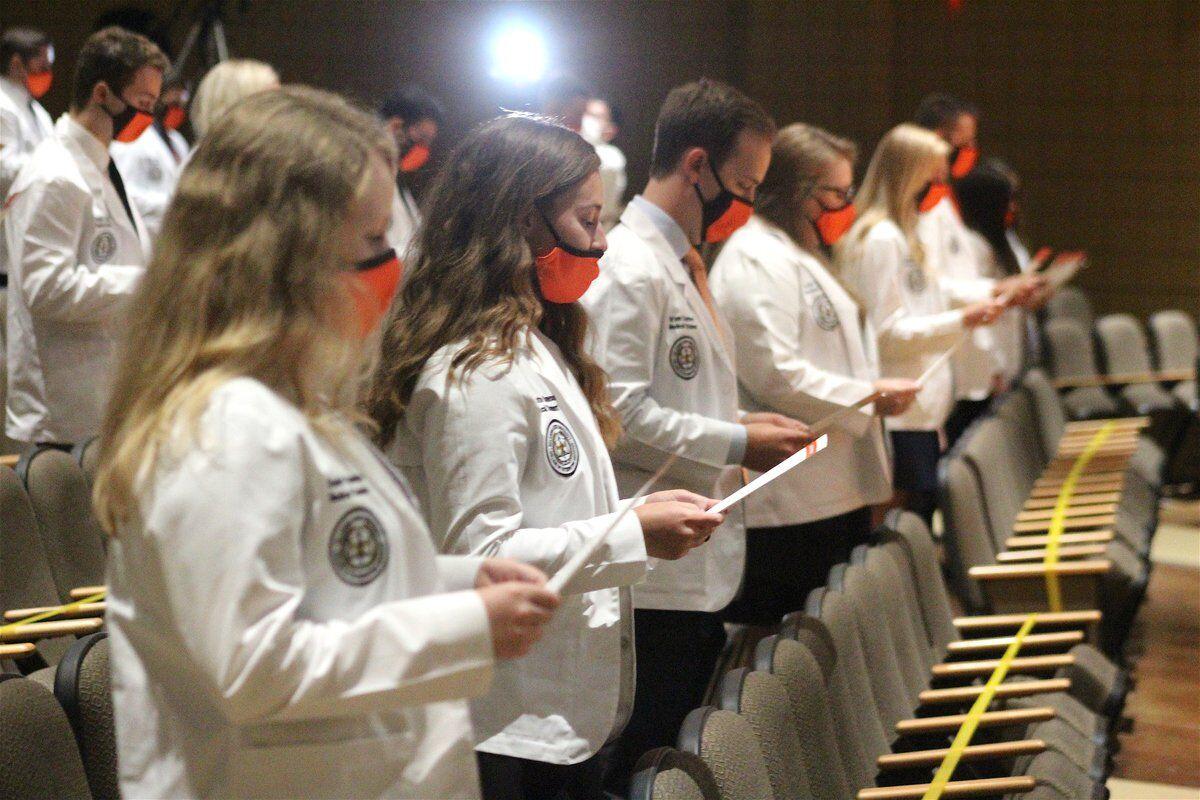 The first 54 students of the Oklahoma State University College of Osteopathic Medicine at the Cherokee Nation read an Oath of Commitment during their white coat ceremony Friday. 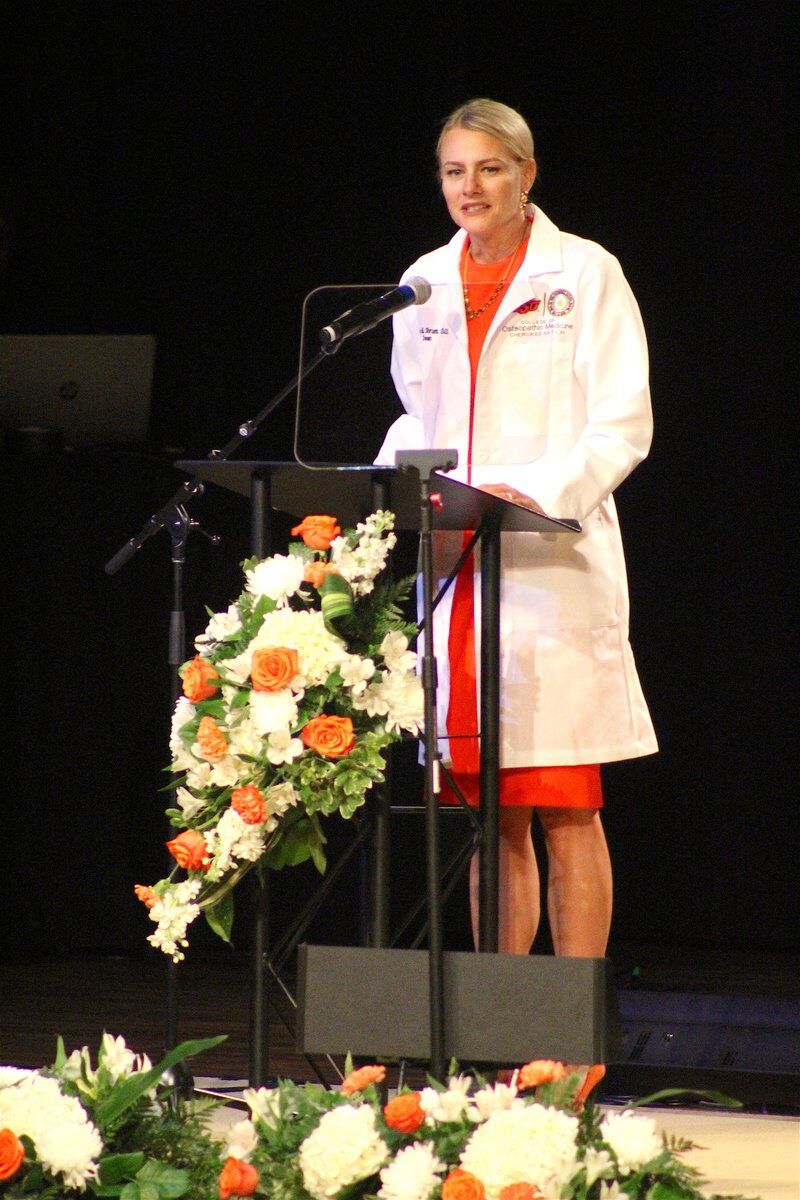 Cooper Anderson, left, receives his white coat from Dr. Natasha Bray during a ceremony for the first 54 students of the Oklahoma State University College of Osteopathic Medicine at the Cherokee Nation in Tahlequah.

The first 54 students of the Oklahoma State University College of Osteopathic Medicine at the Cherokee Nation read an Oath of Commitment during their white coat ceremony Friday.

The Oklahoma State University College of Osteopathic Medicine at the Cherokee Nation presented its inaugural class of 54 first-year students with their white coats Friday in Tahlequah, marking the beginning of their journey in the medical profession.

It was an unconventional ceremony, limited to only the students, school faculty, and Cherokee Nation leadership. Donning masks, the new students and speakers sat socially distanced from one another. The scholars were welcomed by Dr. Kayse Shrum, president of the OSU Center for Health Sciences, who admitted the special occasion was disappointing for the students, who did not have their loved ones cheering them on in the audience.

“We share your disappointment, but the usual circumstance does not detract from your accomplishments, nor does it diminish the pride that we and your family and friends have for you,” said Shrum. “Every white coat ceremony is special, but yours is not only special: it’s historic.”

The OSU College of Osteopathic Medicine at the Cherokee Nation is the first tribally-affiliated medical school in the country. Twenty percent of the students are American Indian, and all 54 of them will attend a mix of online and in-person classes with physical distancing in place. While the construction continues on the new medical facility, students will have temporary classrooms at the CN Outpatient Health Center.

As the students sat in their seats in the audience, they watched a video from CN Principal Chief Chuck Hoskin Jr., who welcomed them to the college. They also heard from their new dean, Dr. William J. Pettit, and Oklahoma Osteopathic Association President Dr. Richard Schafer, before lining up for the cloaking portion of the ceremony and later reciting the Oath of Commitment.

Hoskin credited former Principal Chief Bill John Baker for his work to bring the school to the Cherokee Nation, as he was in office at the time of the agreement between university and tribe.

“His efforts to build our new state-of-the-art outpatient health center led the conversations with OSU Center for Health Sciences about the possibility of housing a medical school campus to add more physicians in the pipeline,” said Hoskin. “That dream is now a reality.”

The 84,000-square-foot building where the students will attend classes includes a clinical skills lab, anatomy laboratory, a simulation center with computer-programmed manikins that mimic a number of medical conditions, and much more.

Zeke Long, who did his undergraduate work at Colorado State University Pueblo and is from the Oklahoma panhandle region, said he is considering finding a place to work after he graduates in a rural community – which is exactly one of the reasons the tribe was hoping to generate more doctors for its citizens.

“Living in a rural Oklahoma area, I can see myself eventually going back to practice in a rural area like that, or an underserved area,” he said. “I’ve worked in family medicine and orthopedics. I know those are two kind of different fields, but I’m kind of interested in those right now. I’m also interested in pediatrics, so maybe in a couple years from now, I’ll make that decision.”

The lack of audience at the ceremony did not diminish Long’s excitement to join the new program.

“I’m still kind of pinching myself it’s happening – the school and everything everyone’s put together has been real special,” said Long.