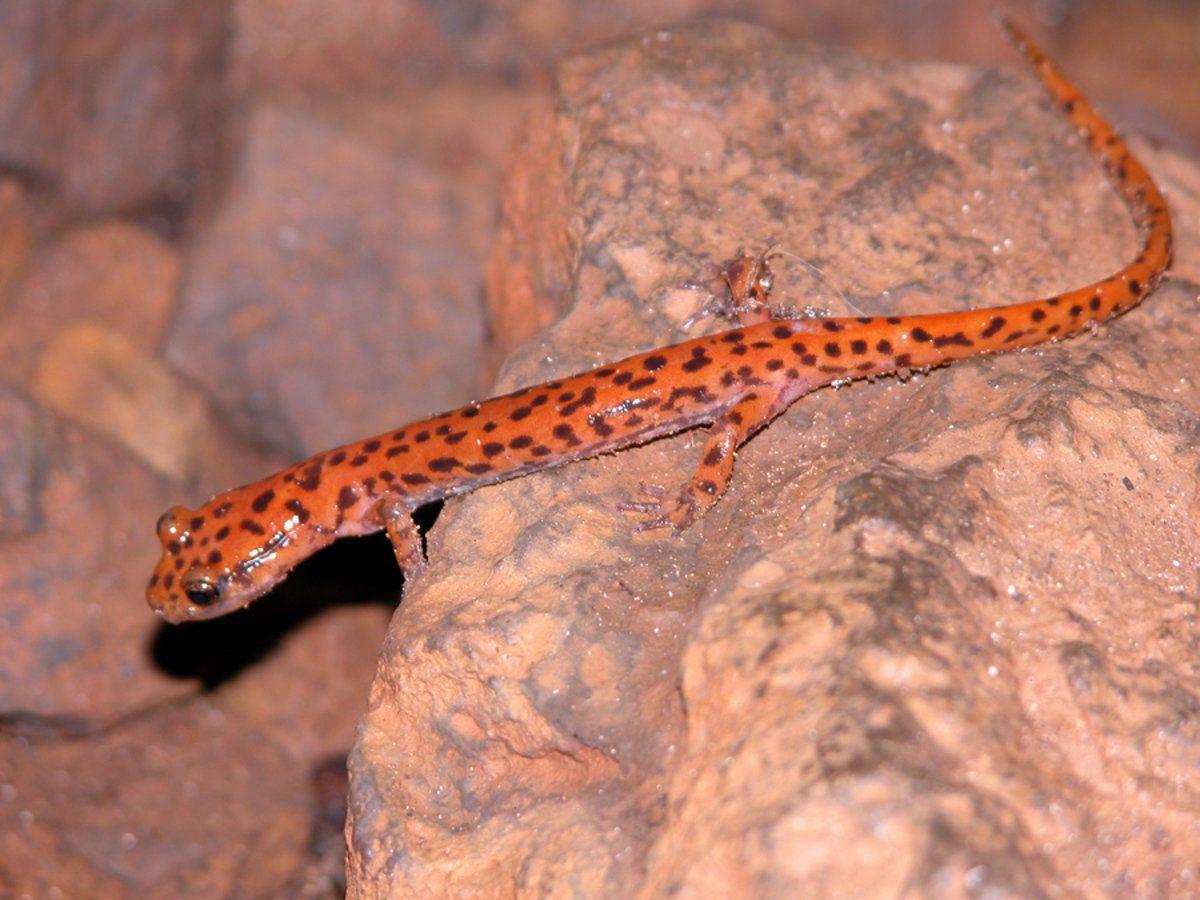 Five species of salamanders make their home in Cedar Hollow Stream and the Bathtub Rocks area. 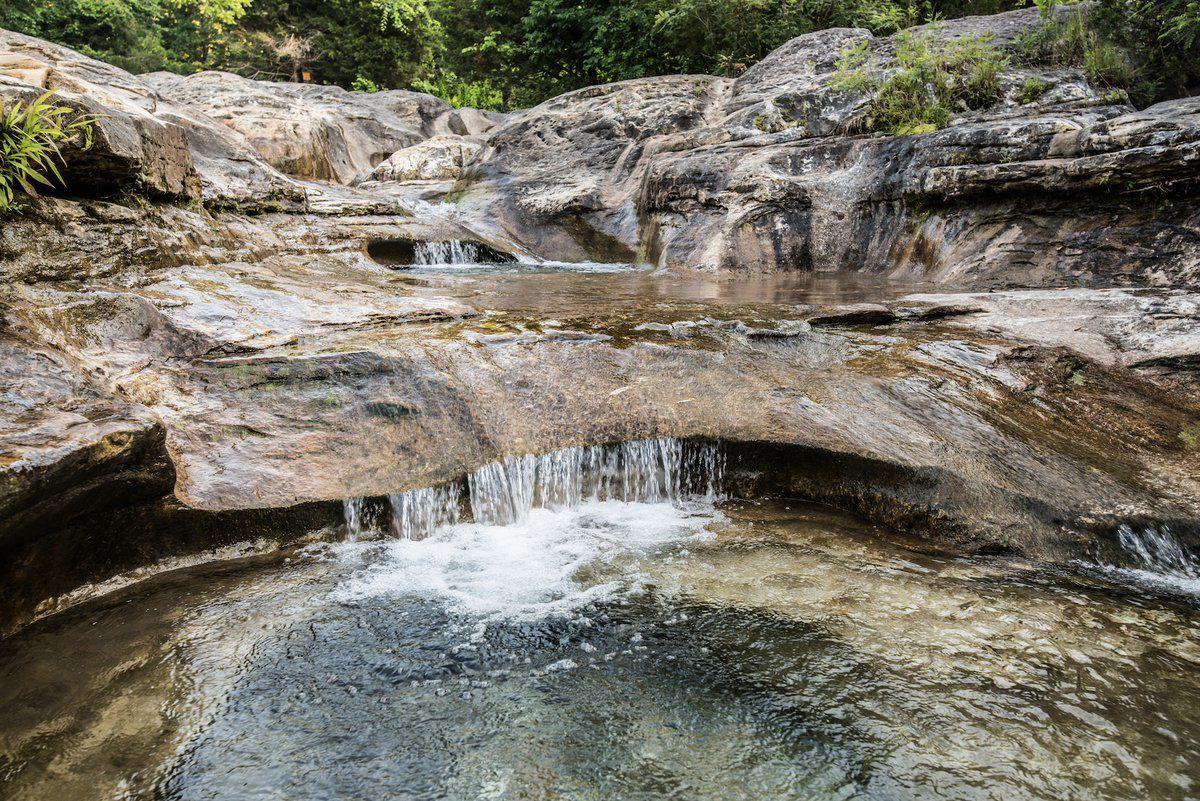 The water flowing over Bathtub Rocks in the J.T. Nickel Family Nature and Wildlife Preserve comes from Cedar Hollow Stream, one of Oklahoma's most pristine waterways.

Five species of salamanders make their home in Cedar Hollow Stream and the Bathtub Rocks area.

The water flowing over Bathtub Rocks in the J.T. Nickel Family Nature and Wildlife Preserve comes from Cedar Hollow Stream, one of Oklahoma's most pristine waterways.

The J.T. Nickel Family Nature and Wildlife Preserve hosted a webinar titled “Why Do We Protect Bathtub Rocks?” Wednesday afternoon, and about 40 people tuned in.

The Bathtub Rocks is a unique feature that makes up only about a half an acre of the 17,000 in the preserve. The Nickel Preserve is owned by The Nature Conservancy, a nonprofit conservation organization, and it is considered private property. TNC currently has the area closed to the public.

After a game of “name the animal based on the sound,” Katie Hawk, director of marketing and communications, introduced Jeremy Tubbs, preserve director. Tubbs explained the natural makeup of the Bathtub Rocks area, which is about a half a mile away from the Illinois River. The sandstone layers are over 450 million years old, and the rock ranges from 5 to 100 feet thick, which is dense for sandstone.

The water flowing over the rocks is Cedar Hollow Stream, which is made from multiple springs and originates about two miles away. The water doesn’t always flow on top of the rocks, and when it does, it can alter the indentions.

“Flooding events carry a lot of sentiment, including rocks, which bang against the sandstone,” said Tubbs. “The depressions catch the sediment.”

While Cedar Hollow Stream was a basis for clean water in Oklahoma, and the water is “pristine,” visitors should not drink from it. The runoff could have pollutants or E. coli.

“Some have vibrant breeding colors,” said Tubbs. “The Oklahoma salamander needs an unpolluted stream to thrive. It is uncommon in Oklahoma, and it is an indicator of high-quality, unpolluted water. Salamanders are fairly uncommon. We prefer people don’t go out looking for them and handling them.”

Unique reproduction happens in the pools and pockets, according to Tubbs. Tadpoles have a “boom-or-bust reproduction,” meaning they are safe in the pools from predators, but they run the risk of the pools drying up before they grow into frogs and can hop out.

The point of the webinar was to teach others how staff are overcoming challenges to protect this pristine water source.

Visitors pose challenges for those monitoring Bathtub Rocks. A county road crosses at the top of the area, giving easy access to vehicles. The vehicles block the roadway and area residents can’t get through. Trash left behind is also an issue. Staff and volunteers have found cans, bottles, diapers, personal hygiene items, clothing, graffiti, drug paraphernalia, and more.

Removing the graffiti means using either a high-pressure power washer or a hand grinder with a wire brush. The rock surface can be damaged during the process, but Tubbs said it heals over quickly.

Hawk said if visitors see illegal activity at Bathtub Rocks, they should call 911.

“We work closely with local authorities to ensure the safety of everyone,” she said.

A garbage can is not on site because that would be an invitation for people to unload all the trash out of their vehicles, said Hawk. Plus, a trash can would entice critters, and some – such as black bears – could get into it. The staff would also have to spend more time checking that one small area.

“If we didn’t pick up trash, the stream would be polluted. Remember that whatever you pack in, you need to pack out,” said Tubbs.

Tubbs said they have a great group of conservationists and biologists who protect the areas and clean up trash. Blue Thumb volunteers have been chemically monitoring Cedar Hollow upstream of the Bathtub Rocks monthly since the end of 2009. A report based on their findings can be found at www.bluethumbok.com.

“We all live downstream,” said Tubbs. “Keeping the waterways clean has positive effects on those downstream.”

Two people on the webinar were Tony Stancampiano, a biology professor at Oklahoma City University, and his daughter, Angelina, naturalist at Sequoyah State Park. Tony typed a message in the chat after Tubbs showed a photo of a large group at Bathtub Rocks. It ended up being the Stancampiano family.

“We are riverside landowners and have been since 1978. We have enjoyed the tubs pre-TNC,” he said. “Sometimes a large group is beneficial. We keep other not-so-nice folks from using the tubs [Bathtub Rocks]. We always leave the tubs area cleaner than we found it. As a biologist, I also educate many folks who come to the tubs.”

Tony also asked if the TNC staff could share some of the Native history in terms of the utilitarian function of the tubs, but Tubbs and Hawk did not have that information. Tony said “hog scalding” was one function.

Another challenge the TNC staff face is that visitors tend to wander up and down the stream. Tubbs said that takes them onto private property, at which point they are trespassing.

Although Bathtub Rocks is closed until further notice, the public can use the three trails in the preserve. They are open to foot traffic during daylight hours, but the Visitor Center and Tallgrass Prairie Preserve bathrooms are closed. Hunting, fishing, camping, dogs, and off-roading are not allowed. Angelina reminded the attendees that the Oklahoma State Park system is open for recreational activities.

“We are following rules from within our organization to prohibit uncontrolled congregations of people, especially in small areas,” said Hawk.

Those who would like to assist the Nature Conservancy with the upkeep of the reserve can donate time and-or money. Visit nature.org/jtnickel or call 918-585-1117 for more information.