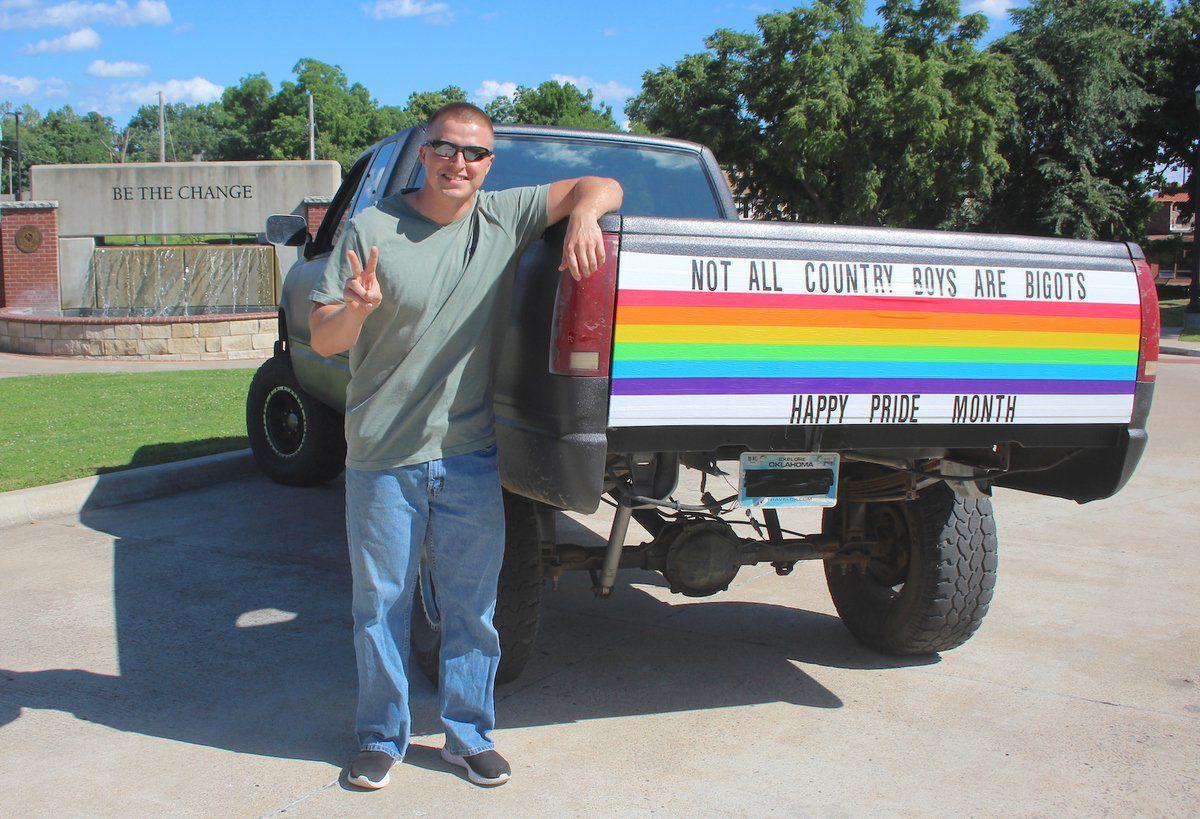 Cherokee County resident and Navy veteran Cody Barlow has gone viral for the message he applied to his truck's tailgate for Pride Month. 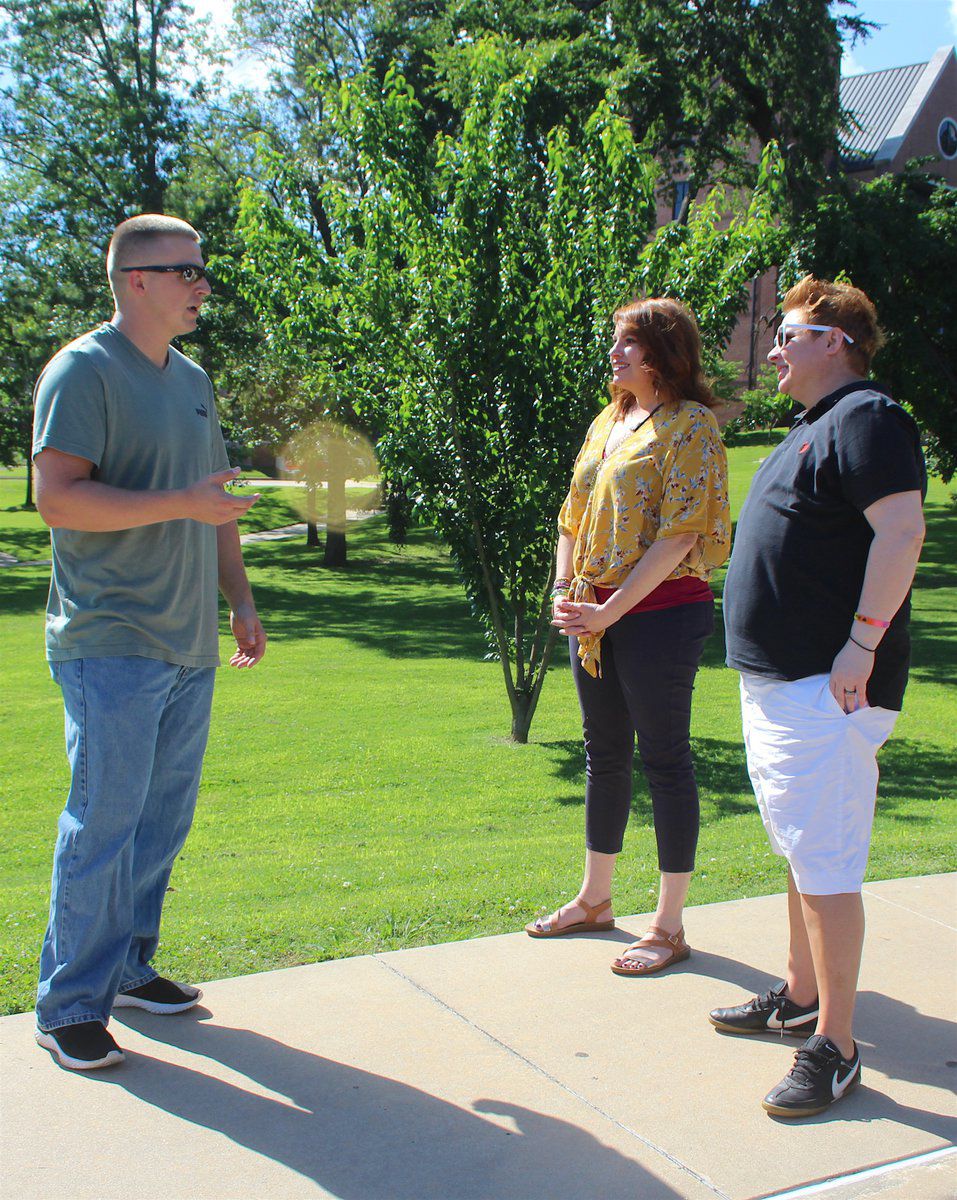 After seeing the the pro-Pride statement Cody Barlow, left, applied to his pickup truck, Carden Crow, right, founder and president of Oklahomans for Equality Chapter: TahlEquality, invited him to be in the Tahlequah Pride march on June 29. They, along with Crow's wife, Shronn Schuelke, met for the first time Wednesday.

Cherokee County resident and Navy veteran Cody Barlow has gone viral for the message he applied to his truck's tailgate for Pride Month.

After seeing the the pro-Pride statement Cody Barlow, left, applied to his pickup truck, Carden Crow, right, founder and president of Oklahomans for Equality Chapter: TahlEquality, invited him to be in the Tahlequah Pride march on June 29. They, along with Crow's wife, Shronn Schuelke, met for the first time Wednesday.

One Cherokee County resident has gone “viral,” and a message on the tailgate of his truck has been seen all over the world.

Since posting a photo and personal message on Facebook June 6, Barlow has received over 21,000 comments and 81,000 shares. His inbox is jammed with messages, and he’s received thousands of “friend” requests and numerous calls for media interviews.

“I’m glad people are still seeing the post. The ones who need to see it are the ones feeling hopeless,” said Barlow. “It’s not about the number of people it reaches; it’s about reaching the right people.”

He understands that younger people are the ones who need a positive message.

“The middle and high school ones are dealing with a lot more. They can’t reach out and they feel repressed,” he said. “Some are killing themselves. Some are not developed enough to deal with it.”

Barlow said there wasn’t anything particular about this year’s Pride Month that led him to decorating his truck, but some topics spurred him on. He's heard personal stories from LGTBQ friends and knows there are people too scared to come out. He's also taken note of the hatred of groups such as “neo-Nazis,” negativity in the media, negative attacks written on social media, and the anniversary of the Pulse nightclub shooting.

“I’m a normal dude here in Oklahoma. I just try to do what I can to help out where I can,” he said.

Scheduled to attend the Pride parade in Tulsa, Barlow said he planned to paint his entire truck in Pride colors for that. But he ended up helping family that weekend and missed the event. He also considered using vinyl on his windows, but was concerned police officers who didn’t agree with the message might harass him.

“I wanted to get the message out without causing issues,” said Barlow.

As of press time Friday, Barlow said no one has tampered with the truck, confronted him personally in a negative way, or even yelled slurs out of vehicle windows at him.

He said he does feel a bit nervous driving in smaller, local areas, and was curious what response he would get when he crosses the stateline into Arkansas to go to the Fayetteville Pride parade Saturday.

“I’ve met a lot of people in these areas who are not tolerant,” said Barlow.

The Silverado is a project Barlow has been working on for a while. It's his secondary vehicle, so he uses it to go fishing, mudding, or to cruise to the lake, but lately, he has been driving it daily.

The entire truck has been covered in bedliner, so he’s not too concerned about the sticky tape, even if it leaves a residue.

Barlow said he is trying to get people to be accepting and tolerant.

“You don’t have to agree or go to parades. Just stop calling people names and beating people up for who they are,” said Barlow.

He said he is not trying to insult small communities or towns, or the people in them.

“It’s specifically about that group of people that treat people like crap and put them down,” said Barlow. “There are a lot of great people, but a few bad ones tend to overshadow that.”

While many reports list him as being from Hulbert, Barlow attended schools in Wagoner. He said his mom is very open-minded.

He enlisted in the U.S. Navy and said he served closely with sailors who are LGBT while traveling around the world. He has been home since fall 2017.

“I’ve been to places where I was the only one who spoke English. I’ve experienced diversity, different cultures and languages,” said Barlow. “I’ve served with people who are gay, lesbian, trans and bi[sexual]. I worked alongside great people. Have patience. Have an open mind.”

While social media has given him an audience for sharing his message, around Cherokee County, not everyone has internet access, and many in the older generations are not on social media.

“Social media gets a broad area, but it needs to be a message in a place where it can be seen for this area, where the message was intended,” said Barlow. “I’ve been hearing some pretty bad stories that have happened to people and still are happening in communities where it seems nobody is a member of the LGBTQ community or they are too afraid to come out.”

Reactions and messages from his friends and family have been positive.

“The ones who feel negative just haven’t said anything,” Barlow said.

In 2018, Barlow was an advocate for State Question 788 and helped register people to vote. He said that experience helped with his communication skills and being around large groups of people.

Last fall, Barlow attended Northeastern State University in Tahlequah, but he took the spring semester off to help his family. He plans to enroll at NSU this fall, and is taking general education courses until he declares a major.

Along with planning to attend the Fayetteville event, Barlow has been invited to be a part of the Oklahoma City parade on June 22, and other organizations have contacted him about July events.

Barlow said that while he likes reading the messages and stories people are sharing online, he looks forward to meeting them in person during Pride events.

“I want to meet them face-to-face, shake their hands, hug them, and be in the community,” he said.

Carden Crow, founder and president of Oklahomans for Equality Chapter: TahlEquality, messaged Barlow inviting him to be in the TahlEquality march on Saturday, June 29. They, along with Crow’s wife, Shronn Schuelke, met for the first time in Tahlequah Wednesday.

“It means a lot to this community. This community has been picked on by ‘your kind.’ You’ve told people that it’s OK for straight, white, country boys to come out and say 'Happy Gay Pride,’” Crow told Barlow.

Schuelke remarked that Barlow’s simple gesture is what support looks like.

“It shows how hungry people are for that validation, for how it’s OK,” said Schuelke.