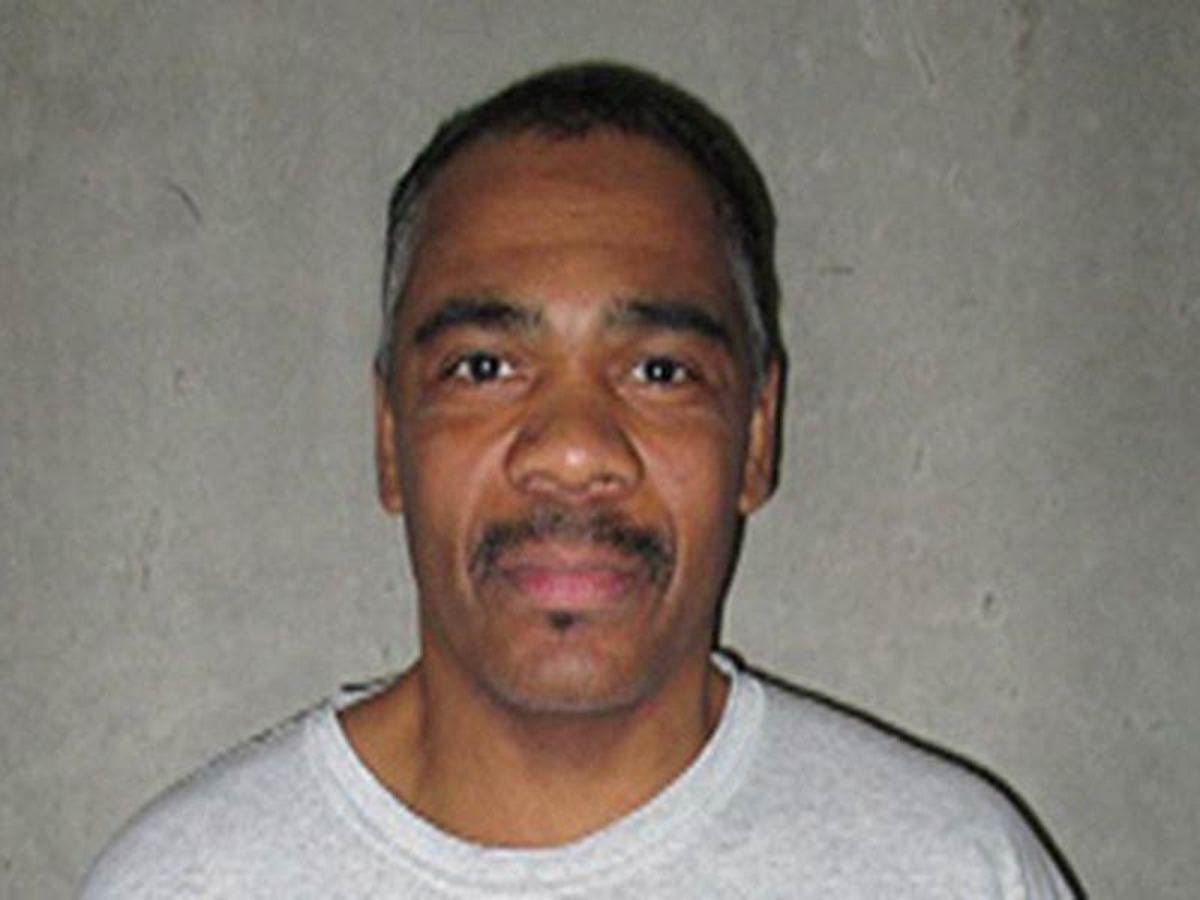 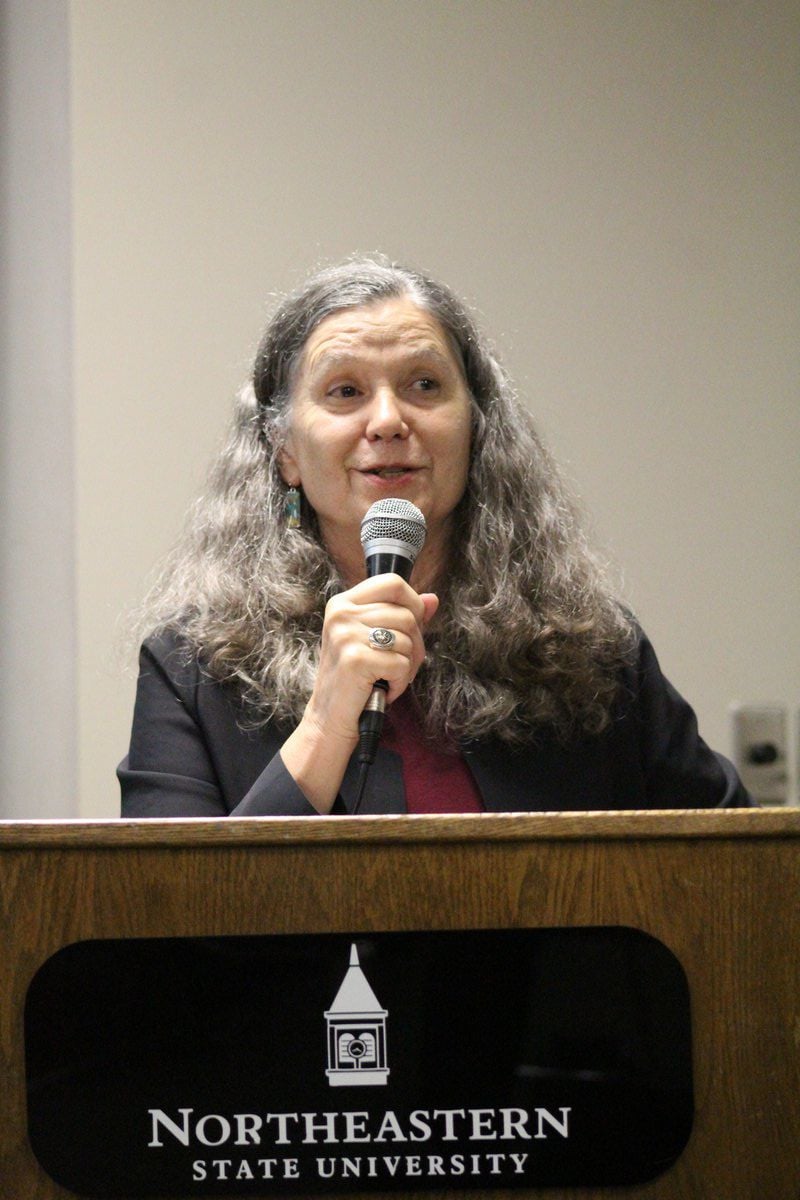 Patti Palmer Ghezzi, a federal public defender, delivered a presentation at Northeastern State University Wednesday on the landmark tribal sovereignty case Sharp V. Murphy, which is to be heard in the U.S. Supreme Court.

Patti Palmer Ghezzi, a federal public defender, delivered a presentation at Northeastern State University Wednesday on the landmark tribal sovereignty case Sharp V. Murphy, which is to be heard in the U.S. Supreme Court.

The U.S. Supreme Court will have a decision to make when the Sharp v. Murphy case is re-argued next term, and Patti Palmer Ghezzi, who was the council of record in the 10th Circuit Court of Appeals for the case, presented her arguments and the implications the case could have during a talk Wednesday at Northeastern State University.

After years of court cases between tribes and the State of Oklahoma that allowed tribal entities to expand their government, courts, and economies, the Muscogee Creek Nation is waiting for another decision to determine whether its reservation was disestablished by Congress. Argument that the reservation was never dissolved was brought up in Patrick Murphy's murder trial, after he was sentenced to death in state court in 2000.

Ghezzi said the issue of the Creek Nation's reservation status first came up in 2004, when an attorney from her office began researching the crime scene and whether it was on restricted allotment land. She found the crime was committed on restricted Indian land, but that only partial interests of it were restricted. She also raised the issue that the crime was actually committed in the historic 1866 boundaries of the Creek Nation - and that those boundaries had never been disestablished by Congress, which is a requirement for a tribal reservation to lose that reservation status, set forth in the case of Solem v. Bartlett.

Therefore, the lawyers for Murphy insisted his case should have gone to federal court.

The key findings of the case in 10th Circuit Court concluded that reservation had not been disbanded. Ghezzi said she and Murphy's attorneys were able to successfully argue that there is no language from Congress that implies the reservation was disestablished or that Congress's intention was to disestablish it. The third argument Ghezzi was able to dispel involved later history.

"This is of course was the state's strongest argument, because these lands of the Creek Nation have been treated as state land by the state and by the federal government since statehood," she said. "But the opinions of the Supreme Court specifically say, 'We haven't ever decided that a reservation is disestablished just because the state and federal government treated it that way.'"

The case was first heard by the Supreme Court in its 2018-2019 term. Ghezzi said the U.S. hadn't been involved in the case until Murphy won the 10th Circuit decision. Most of the rehearing arguments against her view, she said, had to do with past state convictions and a concern that thousands of cases would have to be transferred to one federal district judge and the "defendants won't even have civil rights protections.

"And of course that alarm was really quickly dispelled, because it's simply manufactured," she said. "The Creeks are as committed as any government in public safety, and the last thing they want is just wild lawlessness within their lands… and their constitution and their statutes provide that civil rights apply to people that are prosecuted within the tribe. So that was pretty easy to dispel at rehearing."

Another argument made was that - if the reservation was disestablished - convictions made by the state court would be overturned and prisoners would be released.

"I do federal habeas [corpus] work, so I know how hard it is to collaterally attack convictions, and there's all kinds of procedural barriers for this idea that somehow all of these prisoners in Oklahoma prisons are going to be able to walk free, because of this case," Ghezzi said. "That just isn't going to happen."

Also during the initial Supreme Court hearing, the justices ordered for new supplemental briefing on questions that had never been raised before: whether there's a statute that grants the state jurisdiction to prosecute crimes, regardless of the reservation status; and if there are any circumstances where a land can be a reservation, but not be Indian Country under a federal statute.

Ghezzi said the attorneys for Murphy targeted certain justices who they thought would be rule in their favor. She is optimistic that Justice Sonya Sotomayor, Justice Elena Kagan, and Justice Stephen Breyer will rule in their favor, while she is not so optimistic about the opinions of Justice John Roberts, Justice Samuel Alito, and Justice Brett Kavanaugh, and isn't sure which way Justices Ruth Bader Ginsberg and Clarence Thomas will go. Meanwhile, Justice Neil Gorsuch recused himself, because he served an appellate judge when the cases was heard in lower courts.

That leaves eight judges to make the final decision, and because Ghezzi won the case in the 10th Circuit Court of Appeals already, she would win the case with a 4-4 tie. She was hoping to hear the announcement of tie, but instead it was announced that the case will be up for argument again next term.

Throughout the process, the other four of the Five Civilized Tribes have worked in tandem with the Muscogee Creek Nation. In June, the Cherokee, Chickasaw, Choctaw, and Seminole Nation tribes released a statement regarding the Murphy case.

"The Five Tribes and the State of Oklahoma have worked through many important and complicated intergovernmental issues together. It is clear the Supreme Court's carrying this matter over to the next session gives the Tribes and the State an opportunity to work outside the litigation process to address any implicated issues. History shows we accomplish more together than any of us do alone, and we remain confident that will be the case here."

The Five Tribes share similar history, leaving the door open for similar reservation cases to be brought up in court. However, each tribe's case would have to be looked at separately.

"Some of the same eight statutes that the state relied on to say the Muscogee Creek Nation was disestablished - some of those applied to the other four tribes as well, but each of the tribes had separate allotment acts and different things were negotiated in those," said Ghezzi. "So there's definitely similarities, but the record would have to be developed about that particular tribe."