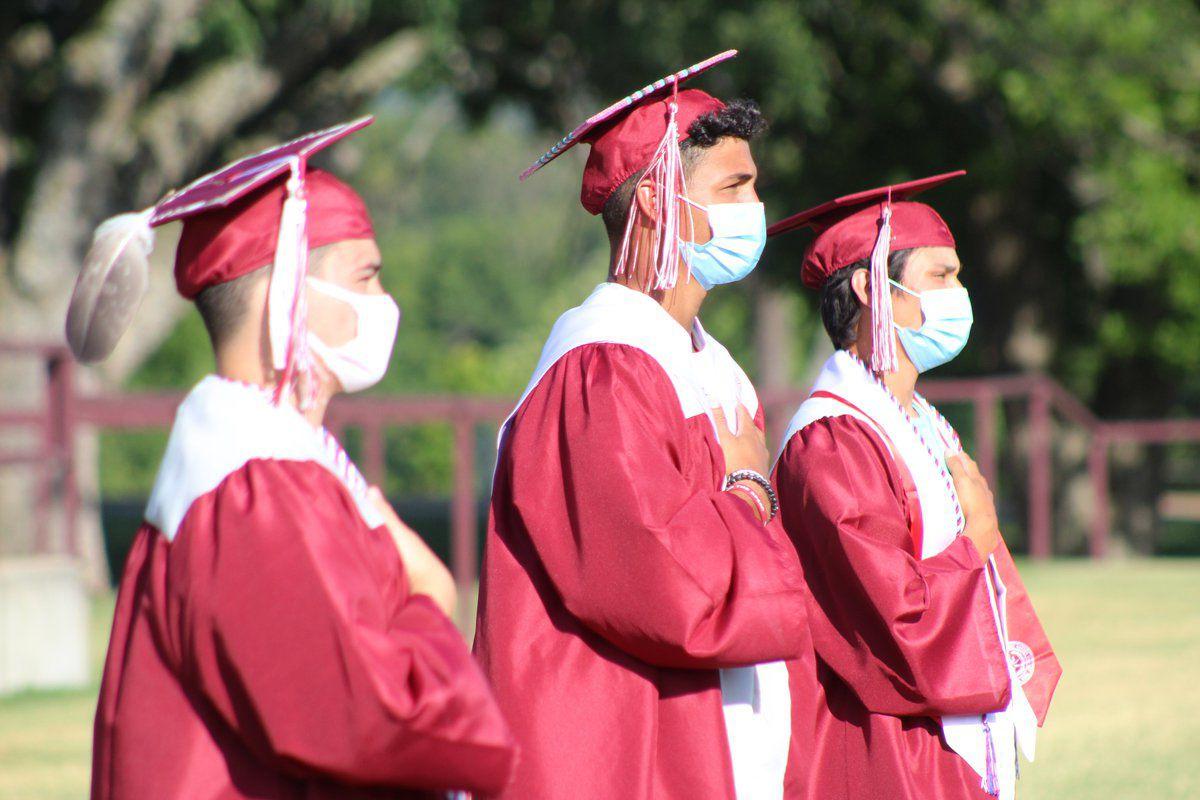 Sequoyah High School graduates Braydon Fields, left; Trenton Harris, middle; and Solomon Winn were given an early graduation ceremony Thursday, as they have plans to enter the military. 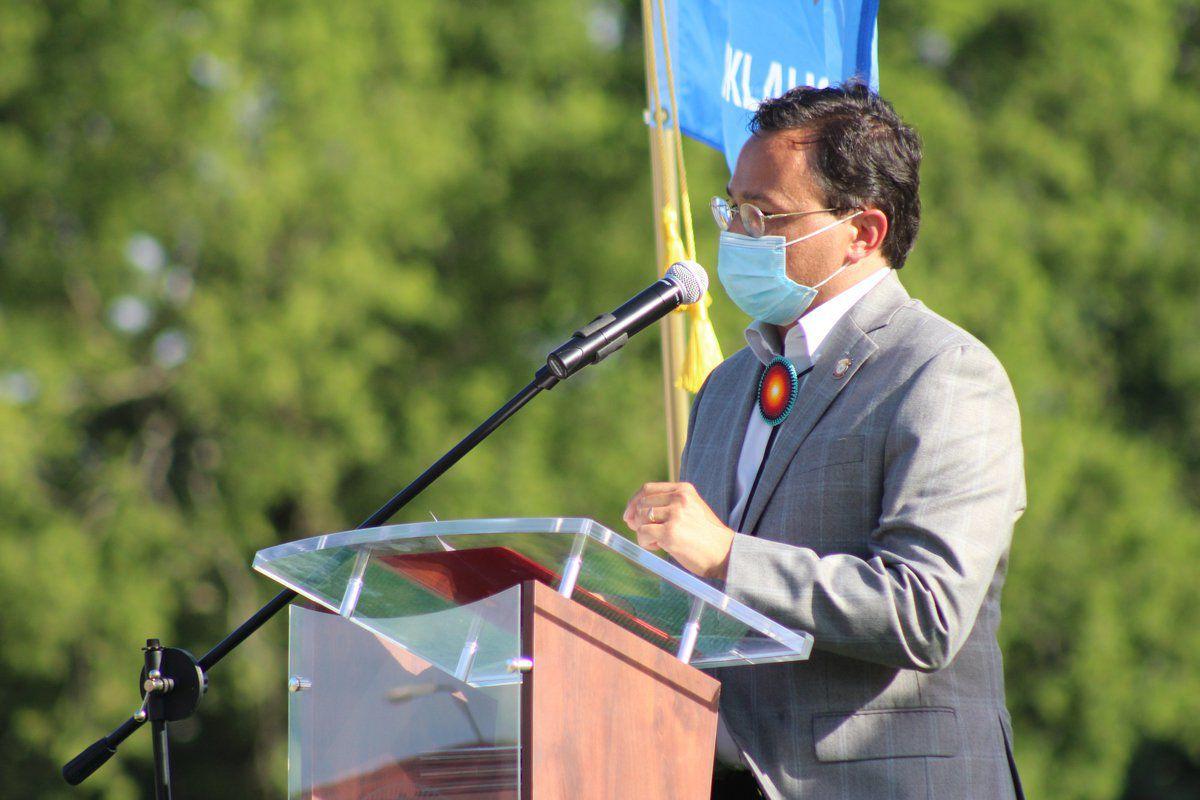 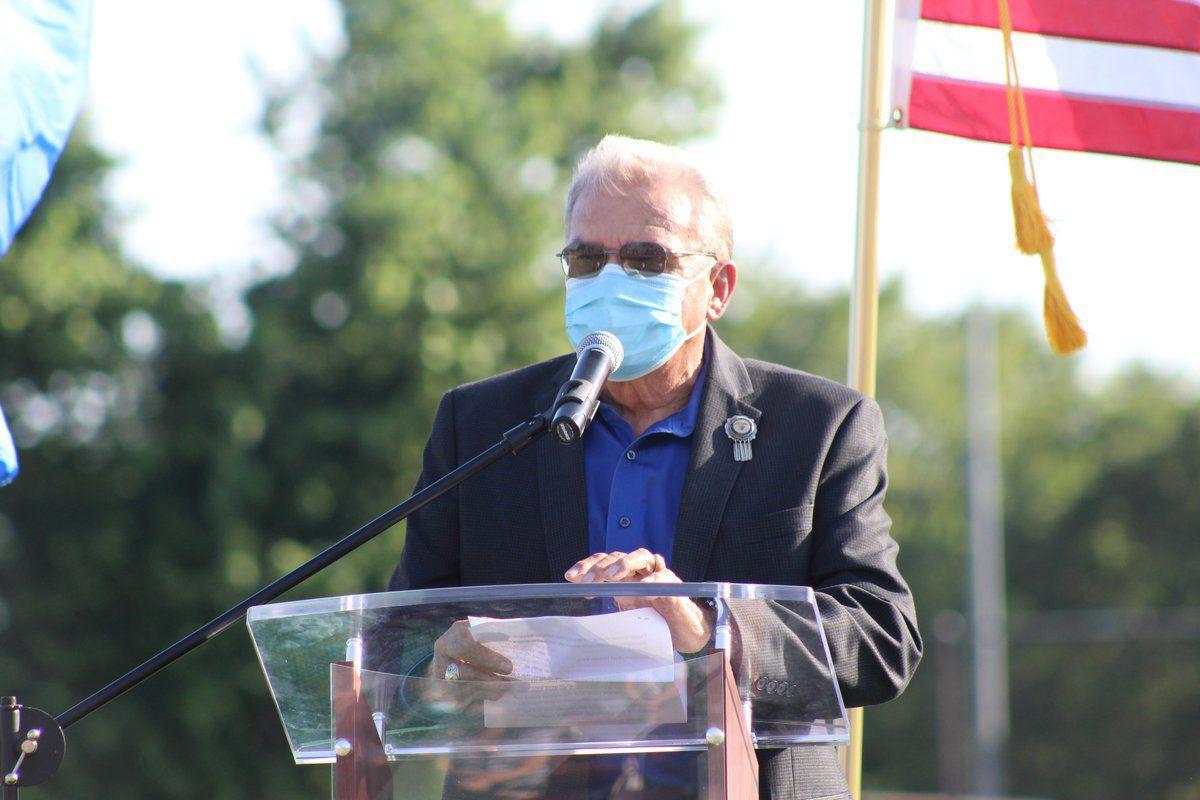 Secretary of Veterans Affairs S. Joe Crittenden delivered a keynote address Thursday for graduates who will be entering the military at Sequoyah High School.

Sequoyah High School graduates Braydon Fields, left; Trenton Harris, middle; and Solomon Winn were given an early graduation ceremony Thursday, as they have plans to enter the military.

Secretary of Veterans Affairs S. Joe Crittenden delivered a keynote address Thursday for graduates who will be entering the military at Sequoyah High School.

Braydon Fields, Trenton Harris, and Solomon Winn listened to a keynote address and walked the stage.

Family and friends were in the stadium bleachers, cheering loudly as each student's name was called.

Graduates, speakers, and attendees wore masks and socially distanced, as the COVID-19 outbreak has changed the environment of special events like graduation ceremonies. Principal Chief Chuck Hoskin Jr. said though this event was different than others of its kind, he and the Education Department wanted to give students as much of the traditional experience as possible.

"COVID-19 has impacted all of our lives, and it's had us change things we normally take for granted, like graduations [that are] going to happen ever year," said Hoskin. "We know they can't happen the way they've always happened, so it's great to have the resources to plan a safe ceremony for them. It's also great that we have the resources and leadership in our Education Department to say, 'These three young men can't be there. What can we do for them?' "

Fields, who plans to make a career out of the Army, said he was honored that the school and tribe held the ceremony.

"Sequoyah has really made an impact on me, and it's something I'll never forget - especially all of the memories, the friends, the teachers that helped me throughout the years," said Fields. "It's really a one-of-a-kind school and I'm glad I chose it."

He did not have much time to soak in his new status as a graduate, as he is set to ship out Sunday.

"It's very emotional that my high school years have come to an end, but I know the next chapter starts with my military career, which starts Sunday," said Fields.

Harris also enlisted into the Army, with plans to serve as a combat medic. He also hopes to make it his career, while pursing a profession in welding.

"My first career choice before welding was to go into pharmacy," he said. "Then I kind of changed my mind, but I'd still like to have that knowledge. After I get out of basic [training], I can go be an EMT anywhere in the U.S. that I wanted to."

Winn enlisted with the Army National Guard, and admitted it was a strange ending to his final year of high school.

"It was kind of a bummer, I guess you could say," said Winn. "Other than that, I felt like I had a pretty good year, a lot of fun, and got the most out of it."

All three graduates wished they could have gathered with their classmates one final time, but understood the situation and appreciated the sendoff.

Also in attendance was the new superintendent of SHS, Patrick Moore, who was hired in early June. He welcomed the graduates and delivered a few words, admitting that it was an odd situation.