Photographs, before and after the extension of College Avenue in the early 1960s, show its impact on the Franklin Castle. 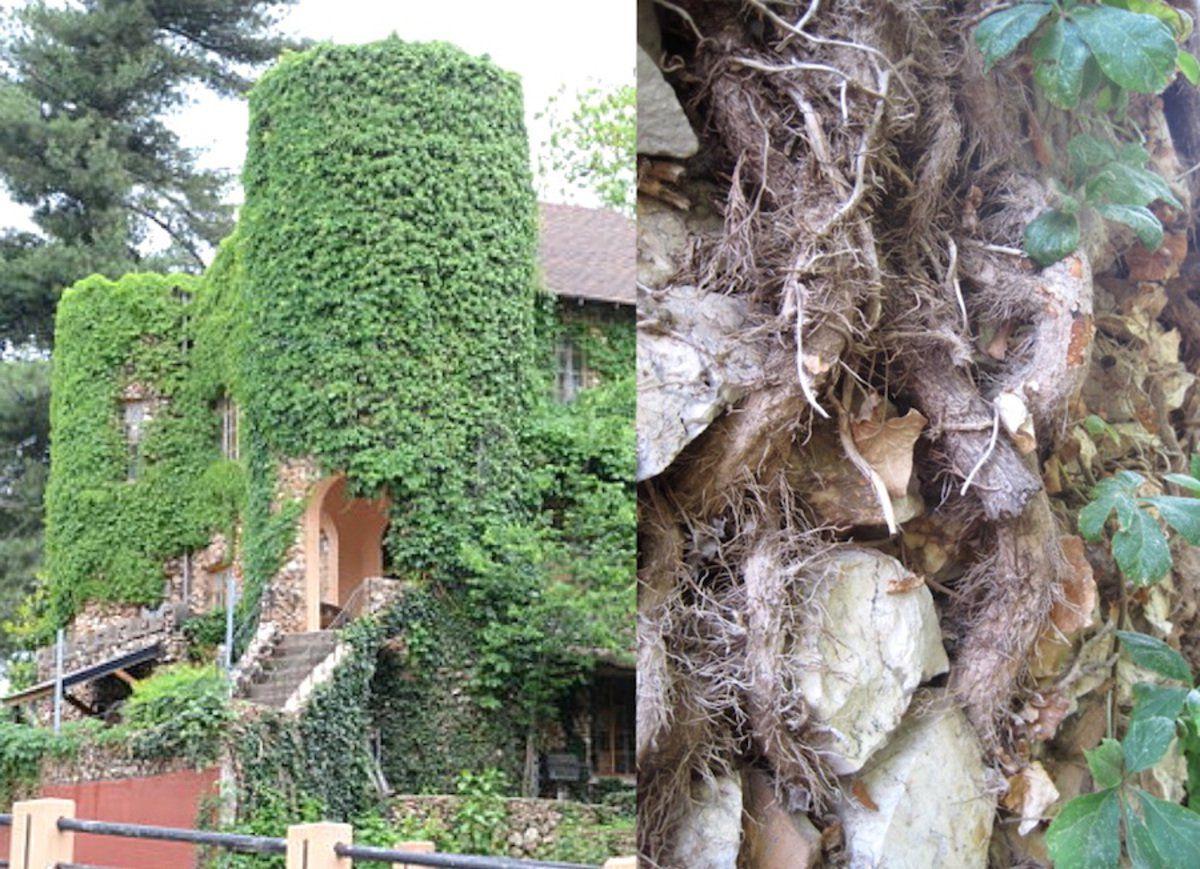 Vines covering much of the castle threatened to destroy the building. The ivy and woodbine hold moisture, their stems dislodge rocks, and their roots penetrate deep into the concrete. 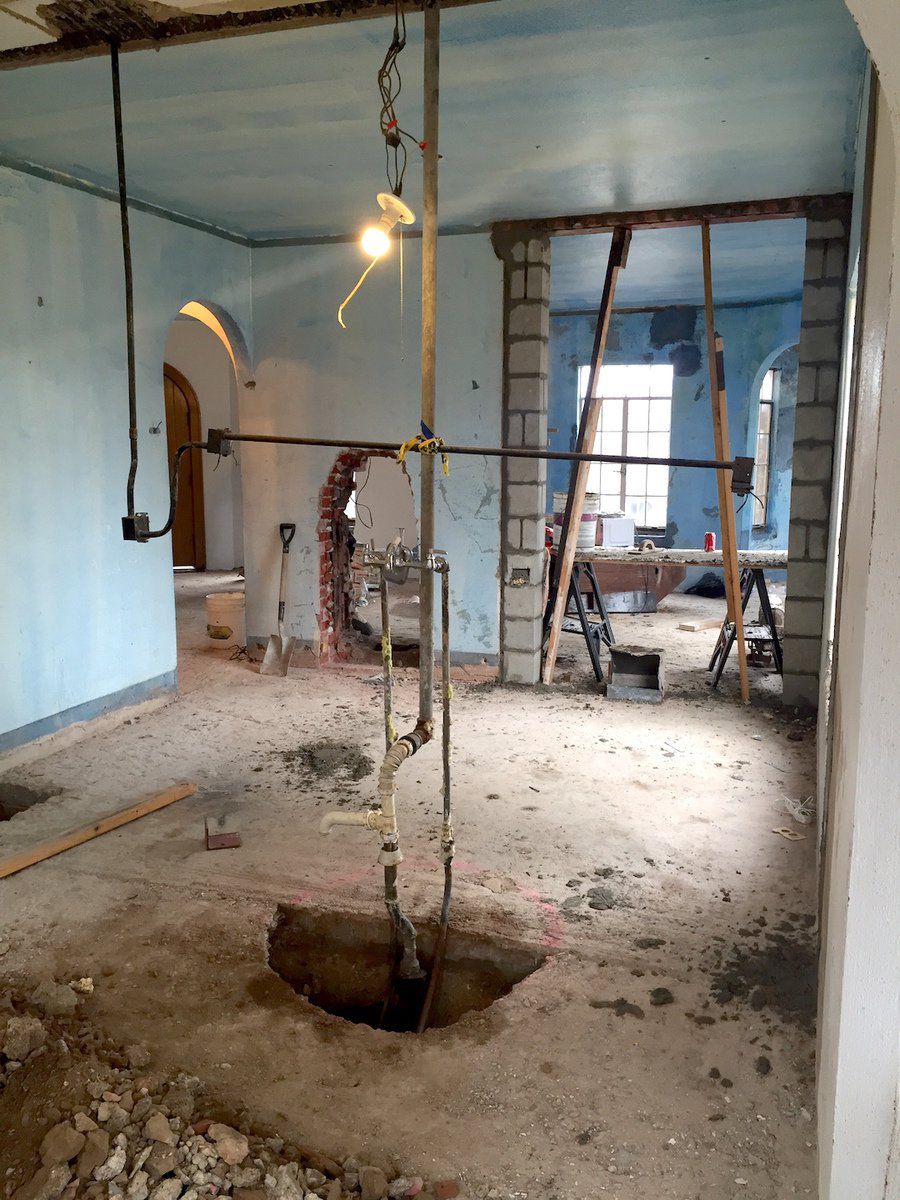 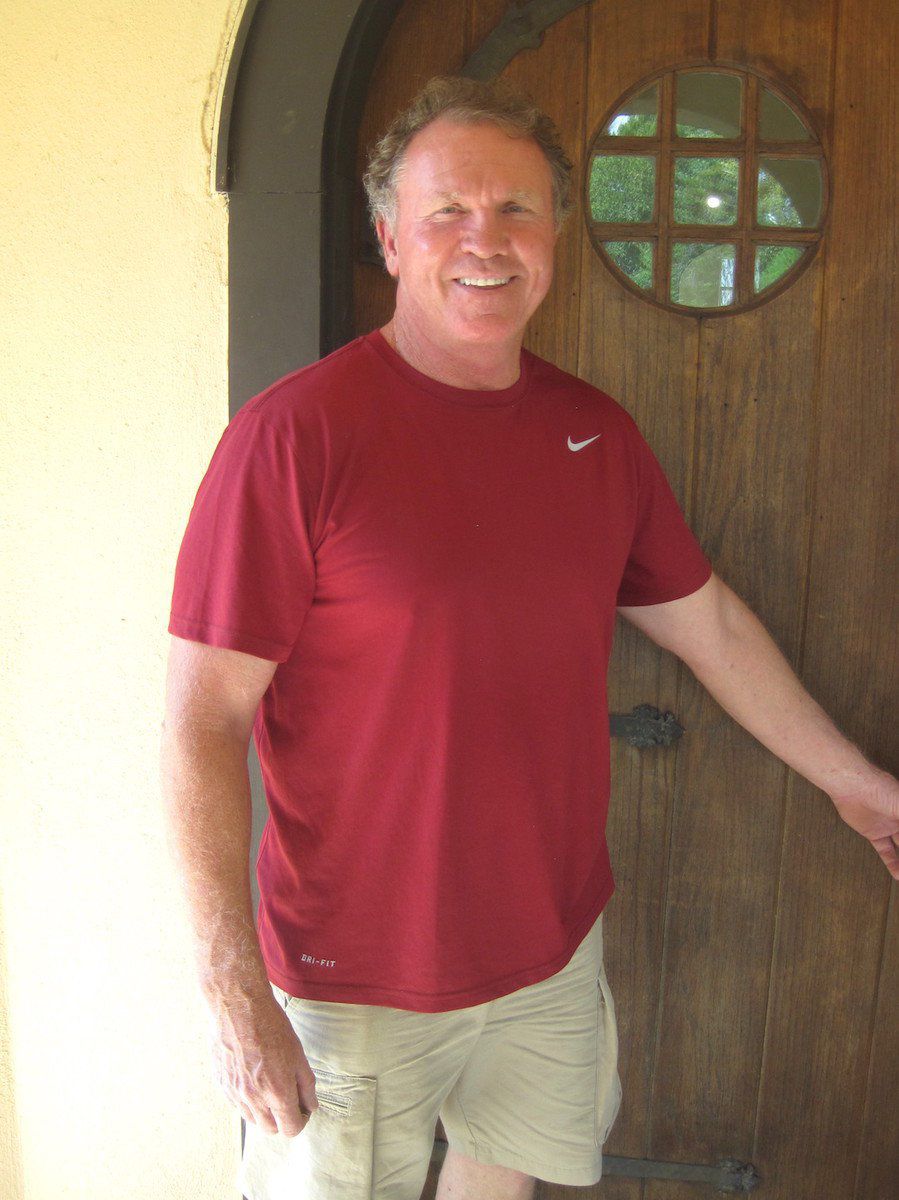 Mike Shelton, owner of a Tulsa masonry business, purchased the Franklin "Castle" in October 2015, and has saved it from deteriorating beyond salvation.

The fireplace in the Franklin Castle living room before, right, and after, left, renovation. 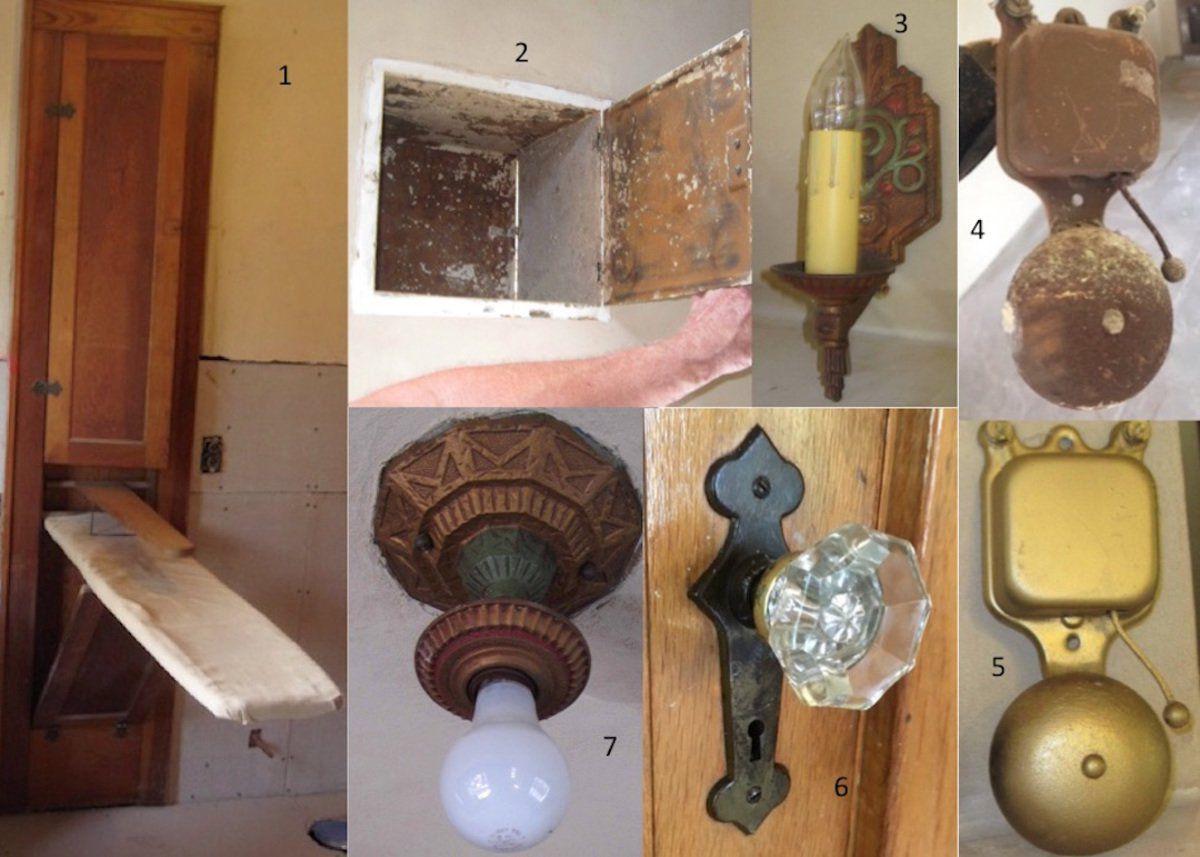 The Franklin Castle contains many useful and elegant features that are being preserved: 1. built-in ironing board in the second-floor utility room, 2. pass-through for milk in the kitchen, 3. electric candle sconce, 4. door bell, before restoration 5. door bell, after restoration, 6. glass doorknob and brass faceplate, and 7. molded-metal and enameled ceiling-light fixture. 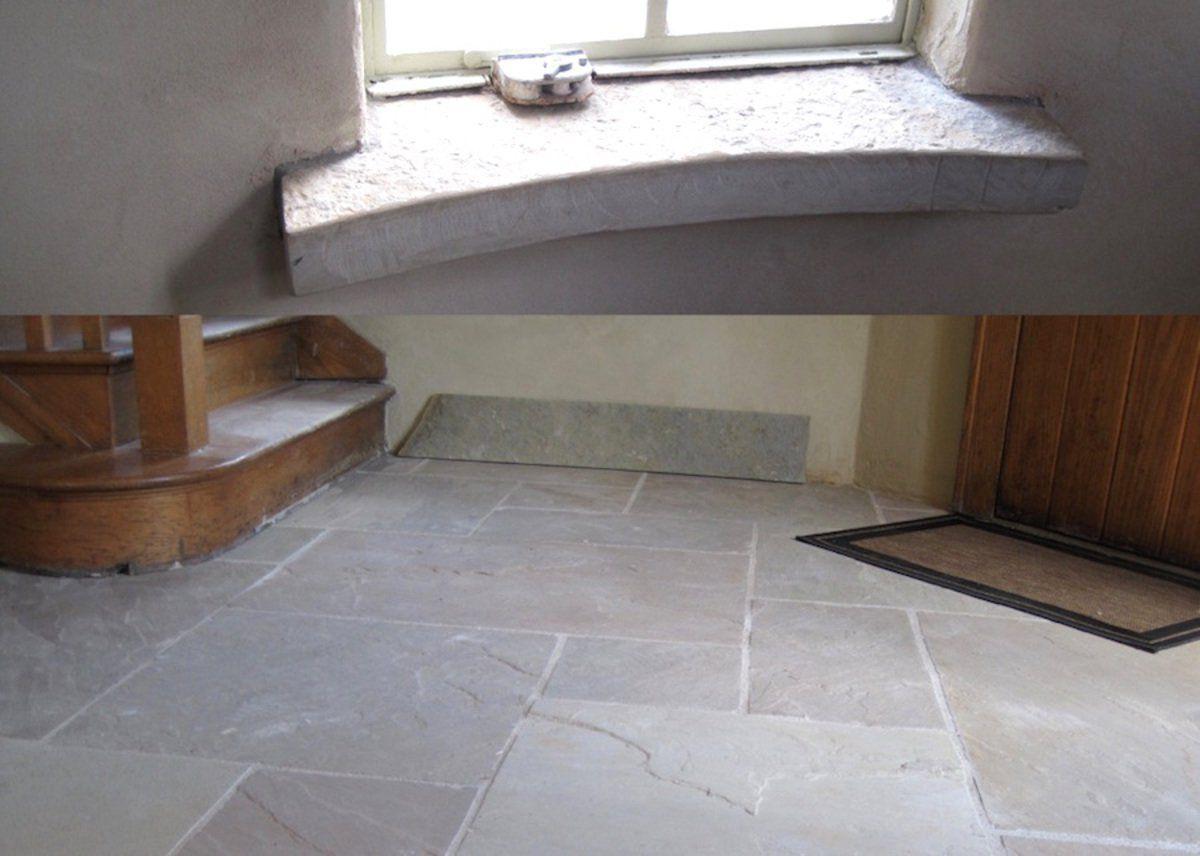 This Indian limestone windowsill in a tower room, top, and all other windows in the house, replaced rotted oak sills. The same stone was use to replace oak floors throughout the ground floor and will be used as baseboards, bottom.

Photographs, before and after the extension of College Avenue in the early 1960s, show its impact on the Franklin Castle.

Vines covering much of the castle threatened to destroy the building. The ivy and woodbine hold moisture, their stems dislodge rocks, and their roots penetrate deep into the concrete.

Mike Shelton, owner of a Tulsa masonry business, purchased the Franklin "Castle" in October 2015, and has saved it from deteriorating beyond salvation.

The fireplace in the Franklin Castle living room before, right, and after, left, renovation.

The Franklin Castle contains many useful and elegant features that are being preserved: 1. built-in ironing board in the second-floor utility room, 2. pass-through for milk in the kitchen, 3. electric candle sconce, 4. door bell, before restoration 5. door bell, after restoration, 6. glass doorknob and brass faceplate, and 7. molded-metal and enameled ceiling-light fixture.

This Indian limestone windowsill in a tower room, top, and all other windows in the house, replaced rotted oak sills. The same stone was use to replace oak floors throughout the ground floor and will be used as baseboards, bottom.

As Mike Shelton was reading the Tulsa World, July 27, 2015, a headline announcing, "Historic castle goes up for sale right here in Oklahoma," and a photograph of the home built by M.E. Franklin in Tahlequah in 1931, jolted him into action.

Owner of a masonry business in Tulsa with more than 30 years' experience in restoring historic buildings, Shelton had been captivated by the Franklin Castle in Tahlequah ever since he first noticed it almost 10 years earlier from Norris Park.

"It was in bad shape then," he recalled. "I told my wife it needs to be saved. It would be sad if it just goes to ruin. And every time we'd go to Tahlequah, I'd drive past it. I admired it, and every time it got worse. And I saw the newspaper story and picture of it, and I was down there [in Tahlequah] the next day to look at it."

Shelton arranged a meeting with Tahlequah Realtors, Ruth Ann Stockton and Janet Prewitt, viewed the house, but decided, "it would be too big a project; there was too much wrong."

For the next week at night his decision bothered him nonstop. One morning he decided, "Something is telling me I've got to do this. So the very next day I made an offer on it and bought it" in October 2015.

Stockton acknowledged that the building was in bad shape; the roof leaked everywhere, and the floors were rotten in many places. She said, "I was so glad when Mike bought it because he was the very one to fix it up because he has the talent, means, and ability."

Despite advice from friends, who said the building was too far gone to save, Shelton believed the structure was sound. "Its bones were good. I feel like I was in the right business to restore it."

Born in Palo Alto, Calif., Mike Shelton moved with his family to Tulsa when he was four or five. His father, a Tulsa fire marshal, ran a roofing company on his days off. While employed by his father as a teenager, Shelton became intrigued with stonemasons working on the house he was roofing. Learning the trade under them, after graduating from Broken Arrow High School in 1977, he went into the business himself.

Following his first thorough examination of the Franklin Castle, Shelton said, "I was overwhelmed by how much needed to be done on that house."

Rot was pervasive; over 60 years of living by the Franklins had taken its toll, but damage from those occupying the house since the family sold it had been devastating. English ivy and woodbine covered most of the home, blocked windows, and invaded the house itself. The vines held moisture; their stems, up to two inches in diameter, dislodged rocks, and their roots penetrated the concrete, weakening the façade.

Shelton's close inspection also revealed what he suspected - the basic structure was as sound as the day the house was finished. To his amazement, after almost a year of renovation, he has yet to discover even the smallest crack in the foundation or walls of the building.

From the time he acquired the castle, most of Shelton's weekends have been spent in Tahlequah, pulling down vines, replacing the roof, removing the debris of collapsed ceilings and rotted floors, stabilizing the interior, and beginning the process of restoration. The new owner's goal is to restore the building to its 1931 appearance.

One post-construction change could not be undone. The extension of College Avenue in the early 1960s preempted the home's lawn on the east, truncated a curving flight of stairs leading to a bridge over the stream below, obstructed the castle's most picturesque vista, and required the construction of a retaining wall that blocked the entrance to the garage. Shelton removed shed roofs, added after construction. He plans to install a garage door identical to the original under the home's main entrance, restore gutters and downspouts to their 1931 configuration, and replace stones dislodged from the façade. Three rusted-out metal posts supporting the first-floor balcony have been replaced, and the concrete terrace and balconies eroded by decades of weather are being repaired.

"The exterior of the house," Shelton said, "will be virtually identical to its appearance when the Franklin family moved in."

On the inside, a few significant changes were necessary to bring the castle up to current building codes and provide amenities expected in the 21st century. Despite the house's almost 3,000 square feet, the rooms are small. To install modern kitchen appliances, Shelton remove the wall between the kitchen and dining room. To improve traffic flow he connected the living and dining room with an arch identical to others on the first floor.

The firebox in the living room fireplace was rusted out and would not have met code had it been in pristine condition. Shelton maintained its location and dimensions, but installed a masonry structure with firebrick and faced it with stone reclaimed from Sportsman's Park in St. Louis.

The metal casement windows were one of the striking features of the house, according to Shelton, but many had been replaced with boards or cut up to allow the installation of air conditioning units. By chance, Shelton was renovating and replacing windows in a Utica Square home in Tulsa built in 1929 that had windows exactly like those in the castle. He was able to reclaim them and replace every missing or damaged window in the Franklin home. As his renovation continues, the Tulsa contractor's respect for the castle's builder grows.

"The building is really more incredible than I even realized when I used to drive by it; it's remarkable what they did and accomplished, and knowing what they had to do to complete that project, it's impressive," he said.

Although many of the doors were missing, kicked in, or damaged, the openings were still square, and no door, still functioning, had to be planed or adjusted. The exterior concrete windowsills look as if the forms had just been removed, and the windows operate smoothly because the openings have not been torqued by settlement.

The major change on the second floor involved connecting a utility room to the largest bedroom and converting it into a full bath. The original second story bathroom was in terrible condition. Shelton thinks it may have been updated in the 1950s because the tub did not seem appropriate to the era of construction. To restore it, he has ordered a claw-foot tub, a pedestal sink, and tile appropriate to the early 1930s.

Shelton was also impressed with the effort of the builder to shield occupants from the heat of Oklahoma's summers. While the home has no insulation, the dead air space in its structural tiles holds the heat at bay.

"I noticed right away that in the summer the house stays fairly cool on that hill," he said. "It seems like even on a calm day there's a little breeze blowing through there. Somebody thought about the circulation when designing the house."

All closets in the castle's bedrooms are small by today's standards, but Shelton pointed out that most houses built in that era did not have closets at all. Clothing was stored in wardrobes or chifforobes.

"Having closets in a house built in that era was really modern," he added.

Other examples of the thought that went into the designing of the castle include: a built-in ironing board in the utility room; a pass-through from the south wall into the kitchen where the milkman could deposit full bottles, and Mrs. Franklin could get them without going outside; an exhaust fan in the kitchen; and storage shelves concealed behind doors tucked into a hall and bathroom.

More than any other of the house's original "convenient touches," the Franklins would probably miss their laundry chute if they returned. The passage, connecting the second-floor bathroom and the washing machine in the basement, Shelton reluctantly repurposed to conceal heat and air ducts and a gas line to run the new furnace.

When Althea Franklin, daughter-in-law of the builder, sold the house in 2004, she said, "I'm going to miss that laundry chute more than anything." Louis White, grandson of M.E. Franklin, had vivid recollections of using it as a kid to communicate and drop stuff down to his cousins below. The castle's glass door knobs and brass faceplates, electric-candle wall sconces, ceiling light fixtures, doorbell, and other finishing touches were saved wherever possible, and, in some cases, restored, and will look like they did when the home was new.

He and his wife, Tara, owner of an antique market south of Tahlequah on U.S. Highway 62, have begun collecting furnishing for the house appropriate to the era of its construction. Shelton also plans to restore the landscaping, particularly the flowerbeds and hanging baskets, that occupied much of Mrs. Franklin's time.

When renovation is completed in spring 2017, and the house has been furnished, the owner plans to make it available for vacation rental. He will host a public opening in the spring, but hazards associated with construction preclude viewing before then.

Perhaps the final sentence of the World article that inspired Shelton to purchase the home provides insight into his reason for saving the building: "The house deserves an owner who will take good care of it as a monument to Franklin and as an important lesson that he can still share with NSU - that with hard work and a little determination, even a poor student from the backwoods of Oklahoma can end up living in a castle someday."

The “castle,” built by Marion E. Franklin in 1931 for his family, may not be the oldest of Tahlequah’s historic homes, but it is the city’s most recognizable residence.